Please keep the articles by Ben Emory coming. It’s refreshing to read stories about real boats and adventures when other outlets seem focused on featherweight foiling, flying machines. Mr. Emory’s perspective as one who has sailed the Maine waters since boyhood is just the kind of thing that makes Maine Boats, Homes & Harbors one of my favorite reads.

In the March/April issue of the magazine there is an article by Art Paine, “Get Sailing!” I believe that the line clutch on page 25 is installed backwards. I’m sure any rigger would know that, but you might give Art two lashes and stop his grog for a week.

The editor replies: You are correct and we’ve limited Art’s grog. 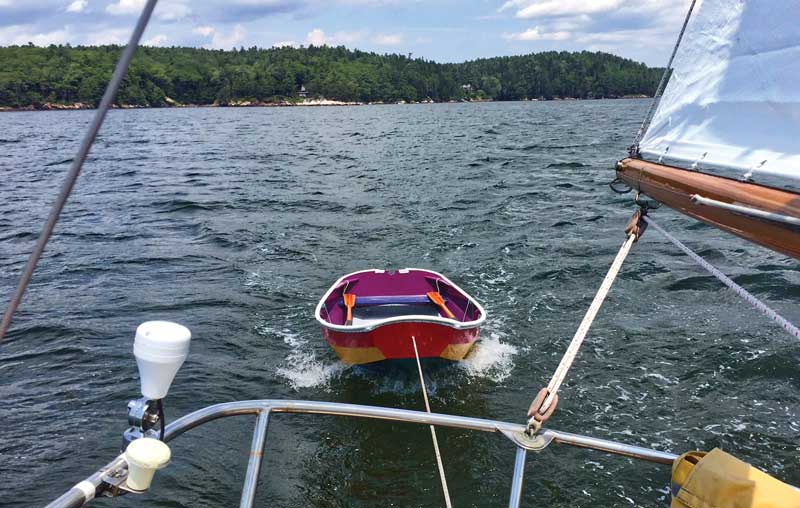 Bobbing on the water

Here is a picture of our Bob—Bob the Dinghy as we call him—being towed behind our yawl Tarna. Our daughter and I built Bob some years ago. She planked one side and I the other. When my daughter was three, I built her a kids-only-sized boat and she picked the colors: red, blue, and purple. So when it came time to paint our collaborative boat those colors came to mind. Bob is red, yellow, and green on the outboard side, and purple, blue, red, and grey on the inboard side. We realized post painting that Bob was painted the Rasta colors on the outside (though upside down), hence the name.

Our favorite boat name is Freudian Sloop—a name that considerably perked up a non-distinct little sloop.

Ah yes, the fun we can have with boat names!

When it came time to choose a name for my Joel White-designed nutshell pram, my wife came up with the winner: Inna. 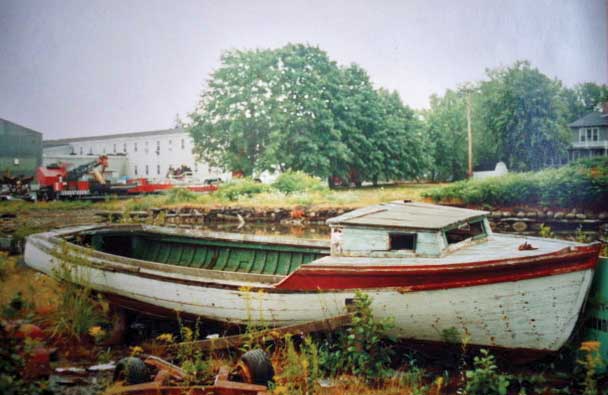 Your March/April issue contains several articles of interest to me, especially “Metal Magic,” a tour of the Lunenburg Foundry in Nova Scotia, and a glimpse of the magical town of Lunenburg.

In the early 1990s I discovered a derelict fishing/lobsterboat in a lot behind the foundry buildings. She was a fine-lined beauty of the ubiquitous type from the 1950s and 1960s in Nova Scotia.

Smitten, I resolved to try to own her. I climbed aboard and inspected her bilges, keel, and frames and convinced myself she was basically sound. A fellow working in the lot told me she had been abandoned there and the foundry would be happy to get rid of her. That’s all I needed; I borrowed a trailer, with truck to tow it, and mustered a party to move her to my summer home nearby.

The old boat survived loading on the trailer, but, despite our efforts to support her with straps circling the hull, by the time we reached my place she had sprung two planks from her stem and the hull had sagged to starboard enough to distort her graceful lines. Reluctantly we chose a slope off the road by the shore and settled her into the underbrush to end her days gracefully as yet another “yard boat.”

If the new face of Maine boatbuilding includes a nose ring and arms with tattoos, I am unable to make the transition. I’m sure the young woman on your cover (March/April 2018) is a nice young woman, but that is not what I care to pay to see on the cover of your magazine.

Just wanted to say how much I loved the most recent cover, which depicts a strong, confident young woman—with all her clothes on!—who makes her living in a traditionally male-oriented industry. Such a refreshing take and so appropriate for our changing world.

For the sake of our daughters, let’s hope that the days of using babes in scanty bathing suits as a primary marketing tool will soon be long forgotten. After all, the marine industry ignores the spending power and decision-making influence of women at its peril.

We love to hear from you

Drop us a line and tell us about YOUR favorite boat name, its origins, and include a photo to share.