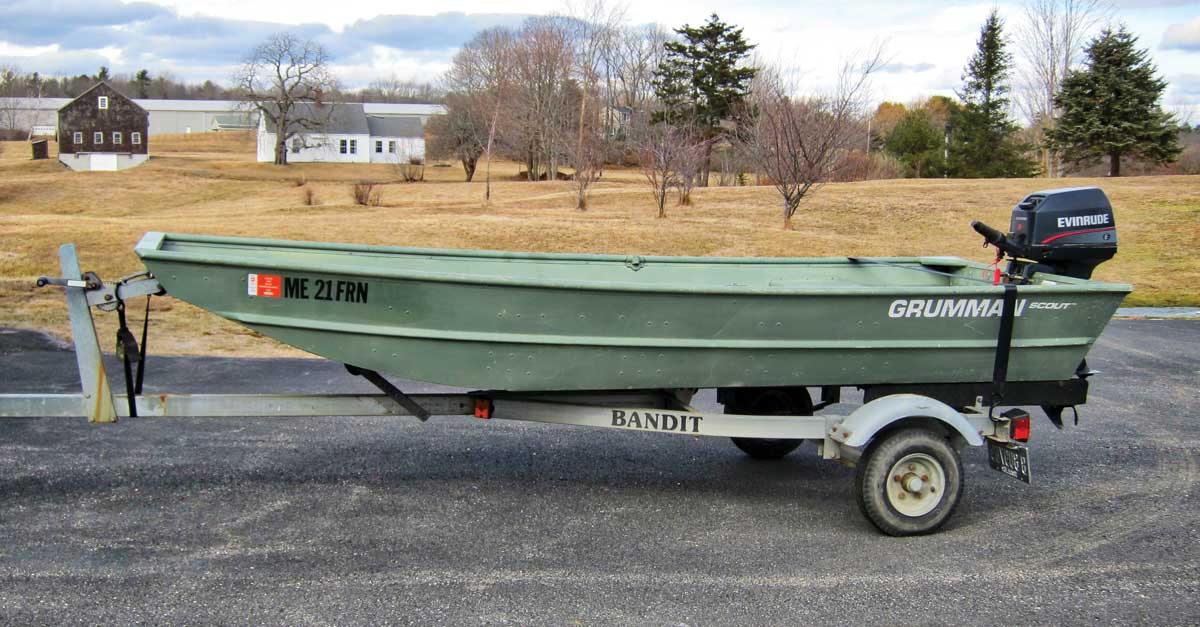 True confession. I just purchased a jon boat. I’ve disparaged them for years as inelegant craft suitable for someone else. Certainly not deserving of the aesthetic admiration generated by a classic New England skiff or Maine-built rowboat.

Maybe I’m just entering the “character boat” phase of my life. I’ve succumbed to my inner demon, which loves all boats and seeks their acquisition. After searching Uncle Henry’s and Craigslist, I found a 12' Grumman jon boat, 6-hp Evinrude motor, and galvanized trailer with which to initiate myself into this new world.

I envision this single craft being so adaptable and versatile that it could potentially replace my haphazard collection of canoes, rowboats, paddle boats, and kayaks.

What’s the history of jon boats? I wondered. Where were they invented? Who used them? Why their longevity as a watercraft?

Lynn Morrow, in the White River Valley [Arkansas] Historical Quarterly (volume 37, winter 1998), provides some insight. Although some think jon boats (also known as johnboats) originated in the lower Mississippi region, Morrow says the folks in the Ozark country of northern Arkansas and southern Missouri claim them as their own. These simple, flat-bottomed craft with squared-off ends initially were built of a few pine boards, and had one to three bench seats. Some boats were of long-lasting oak, but pine was lighter and cheaper, and cost was an important element. That’s because the larger flat boats were often built for a single voyage downstream and were disposed of at the end of the journey.

In the Ozarks of the late 19th century, the smaller flat-bottomed boats were used for duck hunting, gigging, pearling (the freshwater mussel industry), trapping, working timber, and running trotlines and fish traps. A trotline is a heavy fishing line with baited hooks attached at intervals by means of branch lines called snoods. A snood is a short length of line that is attached to the main line using a clip or swivel, with the hook at the other end. They’re used for catching crabs or fish, particularly catfish.

When gigging, the locals would float the boat sideways, with spear fishermen in each end. Night fishing was common, and a long-lasting pine-knot fire or torch in the center of the boat could light an expanse of the river for fishing, according to some accounts. Pine-knot fires also reportedly served as “jack lighting” for spotting deer for a shooter during slow floating at night.

Jon boats also carried folks on river outings, and rusticators found they could fish while standing up on these steady platforms.

In the early 1900s, Ozark river tourist booklets listed contact information for guides and riverside camps for float fishing and hunting. Morrow quotes a guides’ booklet that describes jon boats as being constructed “for use, not show. They are never graceful and trim. They are not pretty.” These square-ended craft could be 6' wide and 32' long but, in general, a classic jon boat for commercial float fishing in the Ozarks tended to be 4' wide and 18' to 24' long; guides and tourists alike poled and paddled the boats.

Apparently, it was not until 1919 that the term “johnboat” appeared in print, in a federal report on the freshwater mussel industry that was partly associated with the Ozarks. No one knows for sure where the name came from. Somewhere along the line the “h” in john was dropped.

There are now at least a half-dozen manufacturers who make jon boats, mostly out of aluminum, and distribute them nationally; some hulls are riveted and some welded. Heavier fiberglass versions are available, too. Most jon boats are used for fishing warm water species in shallow water, and nearly every electronic amenity in the world of small watercraft is available to those who fish from them. They’re frequently powered by jet-drive outboards, capable of operating in extremely shallow water. Although the flat-bottomed jon boats tend to ride over waves rather than through them as a V-hull would, that’s not an issue in protected waters.

So, a checklist summarizing the attributes of the venerable jon boat shows they:

Roger Moody worked in Maine for many years as a town and city manager. He also was a school business services director and served from 2008-2016 as a Knox County Commissioner.