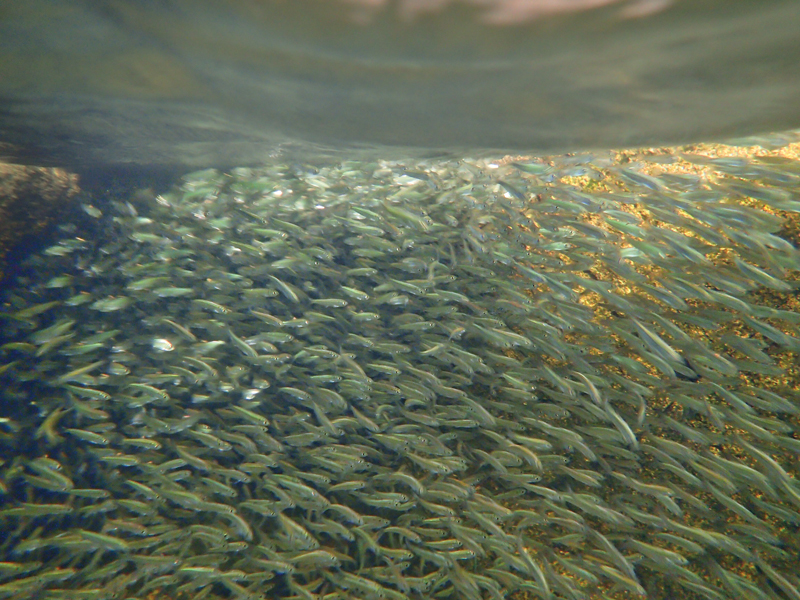 The seasons of the lake lend a reliable rhythm to life: the call of loons in summer, leaves turning to fire in the fall, fish pulled from beneath winter ice, and then the moment of ice-out and the spring awakening.

In some lakes, spring brings another rhythm, as alewives arrive after swimming all the way from the ocean and into lake outlet streams. The adult alewives will spawn and lay eggs, and the juveniles will grow over the summer. 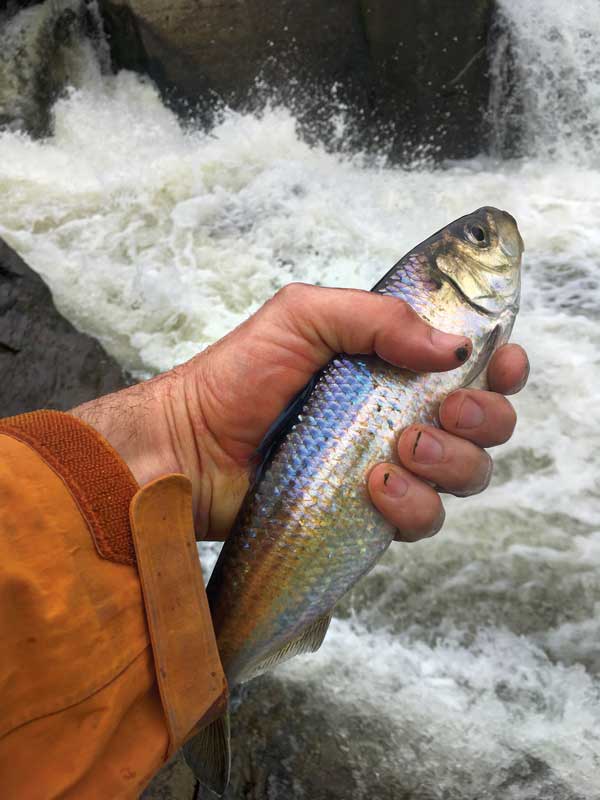 This alewife was caught by dip net in May 2017, one of many thousands of river herring that returned to downeast rivers to swim upstream and spawn in lakes and ponds. Organizations like the Downeast Salmon Federation work with communities to ensure unimpeded fish passage for all sea-run fish, including river herring. Photo by Sara Madronal Maine alewives, part of an Atlantic coast population that extends from Canada to the Carolinas, once numbered in the millions. Historically, alewives lived in virtually all lakes accessible from the ocean. They disappeared from many waters in the 19th century, when dams associated with mills and logging blocked their migration, and in the 20th century, when more dams went up and water pollution kept them away.

Lake by lake, communities lost this connection to the sea, a connection that brought nutrients from the productive ocean far into inland watersheds—hundreds of miles, in some cases. Once there, the alewives became food for other fish, for osprey, eagles, and loons, and for otters and other mammals.

It is because of their role in sustaining food webs that alewives (which, along with their relatives blueback herring, are also known as river herring) have been a focus of restoration initiatives. Across the state, dams are being removed, and fishways are being built and rebuilt to allow access for alewives (and other sea-run fish). In the Penobscot River watershed alone, more than 30 projects, small and large, have been completed in the last two decades to restore flows in the main river and re-connect tributaries.

But it can be a cause for concern, if not alarm, when residents learn of plans to “open up” their lakes to alewives. The prospect raises questions about how the new influx of fish will affect water quality and how the alewives interact with other resident fishes.

There is not a lot of research on alewives in Maine lakes. Much information comes from the Great Lakes, where the fish was introduced and isn’t migratory, and thus the biology and ecology are not really comparable to Maine, where lake communities evolved with the presence of alewives, according to scientists interviewed for this story. The biggest difference is that in Maine, the native alewives are connected to the ocean, and they migrate seasonally.

On average, 55 percent of adult alewives survive migration and spawning, and trickle out of the lakes through the summer and return to salt water. They can repeat the process for as long as eight years, according to Bigelow and Schroeder’s classic Fishes of the Gulf of Maine.

The hatched young remain in the lake, eating and eating. Young alewives eat zooplankton, relatively large but still microscopic crustaceans like cladocerans and copepods. In two to four months, they grow to between four and fourteen centimeters long, depending on the lake. Traveling schools ripple along the shoreline. Some lakes might produce a small number of big fish, while other lakes see lots of little fish, and the population can vary from year to year. The dynamics of this tradeoff between size and number is not well understood. 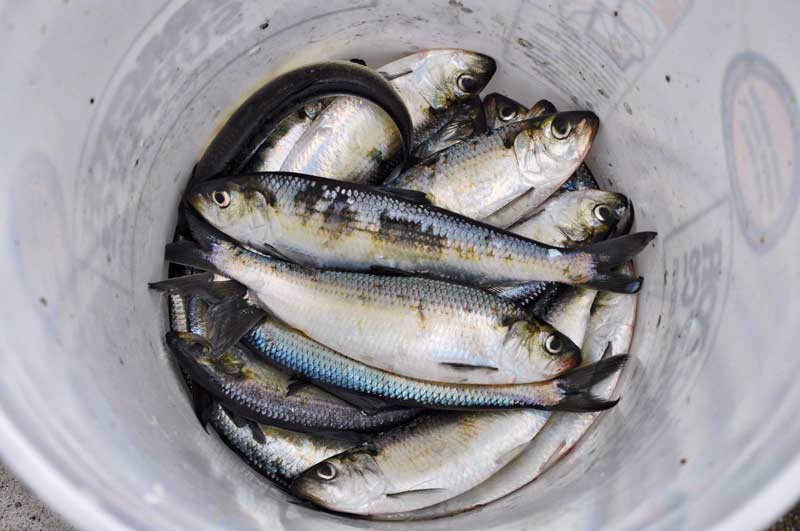 Downeast Salmon Federation and Alewife Harvester of Maine biologist Sarah Madronal harvested this bucket of alewives in Columbia Falls, Maine, for scale samples. Scale samples are one of the many monitoring efforts used to determine the overall health of river herring populations. Analyzing them helps biologist determine the age, sex and reproductive status of river herring. Photo by Sarah Madronal

The size of the young alewives relative to other fish in the lake influences competition for resources. The lakes where alewives have been returned in recent years have changed over the decades and centuries while the fish were missing. There are new fish species (see sidebar), not present historically, but now well-established, and, in many cases, well-liked by recreational anglers. While scientists have yet to figure out many aspects of lake food webs, hard evidence that sea-run alewives negatively affect resident fish in Maine lakes is scarce. A nine-year study of Lake George, located in Canaan and Skowhegan, authored by staff of both the Department of Inland Fisheries and Wildlife and the Department of Marine Resources, found little conclusive evidence of negative impacts of alewives on other components of the lake ecosystem.

Adrian Jordaan, a graduate of UMaine and now an assistant professor at the University of Massachusetts, is investigating the variable productivity of river herring in lakes from Connecticut to Maine. The alewife effect varies by lake, he said, but the fish are part of a lake cycle.

“We’ve seen no negative interactions with other fish,” he said. “We see some subtle effects where they can change growth rates, but our work shows that it is because of an increase in predator condition during June. So lakes with alewives produce larger white and yellow perch.”

Sea-run alewives are an important source of food and an irreplaceable link between the sea and inland watersheds, Jordaan added. White perch, black crappie, brown bullhead, and bass all eat alewives.

“Bass eat them like you wouldn’t believe,” said Karen Wilson, a researcher at the University of Southern Maine who studies alewives. “If you go to the top of any fish ladder during a run you will find some very fat and happy bass.” Wilson tells of an infamous bass known as “The Colonel” who lives in Damariscotta Lake, home to one of the largest alewife runs in the state. 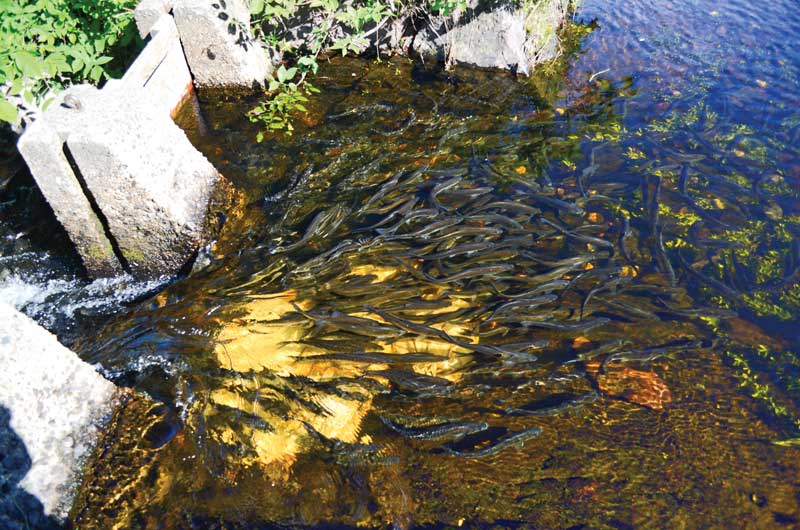 Another study was recently completed by Betsy Barber and Joseph Zydlewski of the University of Maine and U.S. Geological Survey, Maine Cooperative Fish and Wildlife Research Unit. They created a model of the food web in the St. Croix and East Machias rivers to help describe how alewives affect nutrients within the watershed.

Waste products and adult alewives that don’t survive break down into nitrogen, phosphorus, and minerals. These important, “limiting” nutrients are consumed by algae and move up through the food web into zooplankton and insects and invertebrates as they scrape the film from rocks and plants. Barber traced marine nutrients from the spring alewife run into mayflies and caddisflies. With sea-run fish, the influence on the lake food web lasts only until the fall when the young alewives leave in pulses—little “packets of nutrients” headed to sea.

Barber and Zydlewski found that most of the time there is likely no change in nutrients on an annual basis. Also, the number of alewives coming into Maine lakes is still low relative to historic populations, low enough that there can actually be a net export of phosphorus as juveniles leave the lake.

The departure of juveniles may explain why water quality improves in some lakes, such as Webber Pond in Bremen, after alewife restoration. Other lakes, like Sebasticook, see little change. The influence of alewives on water quality may depend on whether a lake is low-nutrient (oligotrophic) or eutrophic, and how often water flushes in and out. By any measure, the nutrient input from alewives is overwhelmed by runoff caused by humans (leach fields, soil and road erosion, and fertilizers).

In some cases, after alewife restoration, a lake might experience new algal blooms, as large grazing zooplankton are removed. But such occurrences tend to be ephemeral. “This isn’t the common experience in Maine lakes, because a lake has to already be prone to algal blooms (have high phosphorus levels) to see an increase,” said Wilson, who has looked at alewife diets in Cobbossee Lake, Pleasant Pond, and China Lake. In other words, if there is already a water-quality issue, predicting the outcome is complicated.

The presence of alewives is often not the only change occurring in a lake. Longer summers are extending the period of stratification, which also affects water quality. Fluctuating lake levels can affect fish that nest or live in shallow, shoreline habitats. Fish like bass may move to different parts of a lake, and anglers may need to adjust their habits. The important thing to remember, it seems, is that no two lakes are the same, so it can be problematic to transfer findings from a few studies or observations.

The alewife is in decline throughout its range. Maine is a conspicuous bright spot where populations appear to be the healthiest, with the greatest chance for restoration success. Maine is the only place that still has a major fishery for alewives, which are used for lobster bait. Beyond coastal communities, many biologists and restoration professionals see an even greater value in the effect on the food web.

“The food is coming in to the system when other animals are just getting going after the winter,” said Zydlewski. “It’s a lifeblood. Energy from the ocean has a cascading effect, and kick-starts the summer growing season.”

Lakes tend to fix in memory, always there, always the same in the mind’s eye. The lake of today, swirling with bass and reedy around the edges, is not as it has always been, nor as it will always be. Lakes deceive us into thinking they are timeless, self-contained systems in a delicate balance. But like other ecosystems, lakes are characterized by change, often occurring unseen beneath the surface. Water turns over, and predator eats prey, and materials flush in and out. Alewives are just one part of the dynamic, connecting salt and fresh water. The fish jump, the cedars and pines sway in the wind, the loons and eagles dive, and through them all beats the heart of the sea.

Catherine Schmitt is Communications Director for the Maine Sea Grant College Program at the University of Maine. She is the author of A Coastal Companion: A Year in the Gulf of Maine from Cape Cod to Canada.

The species here are listed from most to least common. This list is based on Freshwater Biodiversity in Maine, 2005, a report compiled for the Nature Conservancy, Maine DEP, and the Maine Department of Inland Fisheries and Wildlife.

*Native fish, meaning present in Maine lakes since the last ice age 12,000 years ago.  It is now illegal to introduce a non-native fish species into a lake.