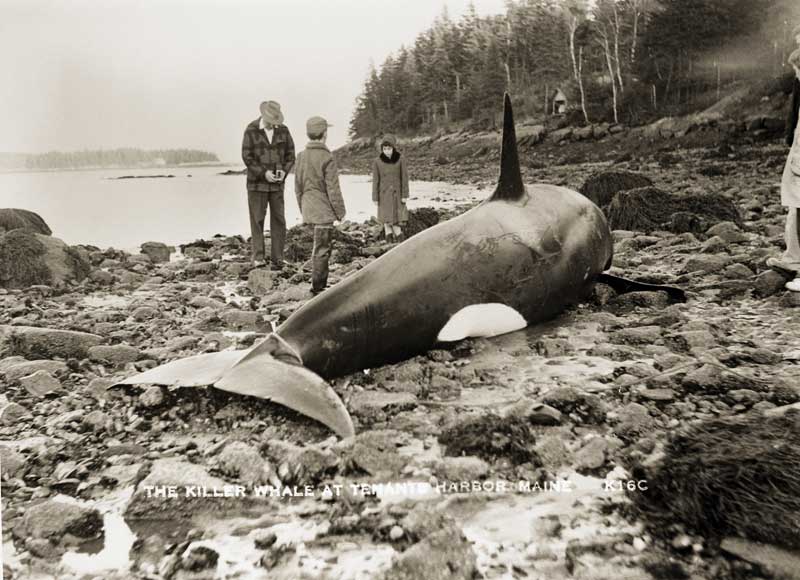 This 4-ton, 20-foot orca, or killer whale, attracted much attention in 1956 when it was stranded in a cove leading from Blue-berry Creek in Tenants Harbor. The Rockland Courier-Gazette of December 15 reported: “Children and grown-ups alike took advantage to mount the killer whale’s back while camera shutters snapped.” The boy in this photo is Alan Hupper. The girl is Nadine Dowling. Nadine, understandably, looks ill at ease. Perhaps she is concerned for the whale.

The camera appears to be an iconic Rolleiflex. Historian John Stilgoe has written: “The Rolleiflex causes users to bow towards subjects. Most photographers not only bowed their heads… but also slightly hunched their shoulders and pulled in their stomachs, bending their bodies at the waist.” Viewfinder cameras, Stilgoe observed, capture a different perspective than do 35-mm cameras, or indeed cellphones.

The next morning at high tide, fishermen Hugo Lehtinen and Allison Morris, using a small outboard motorboat, towed the whale to deeper water, only to find themselves being towed by the still lively creature. That night the whale stranded again, but had vanished by morning.

Sighting a killer whale today in the Gulf of Maine is a great rarity, although in the 1880s Cape Codders complained that the whales interfered with attempts to drive blackfish ashore.