A lighthearted ode to the long stick with a wide end

The actual inventor of the oar is a bit of an enigma. Some maritime scholars say it was a brilliant old sardine fisherman from Norway named Lars Oars several hundred years ago.

Reportedly, he got tired of swimming out to his offshore sardine carrier and starting each working day cold and soaked to the bone; particularly when the bay was nearly frozen over.  He was looking for a better way to start his day. Researchers believe that Lars Oars once found a long stick with a fat end on the beach, jumped onto some flotsam, and paddled out to his waiting craft. From that clever beginning, the whole concept of going to work warm and dry took on momentum.

An oar is a long stick with a wide end; a simple and enduring invention that will probably outlast the popularity of the George Foreman Hamburger Grill or the Dust Buster Car and Truck Vacuum of present times. 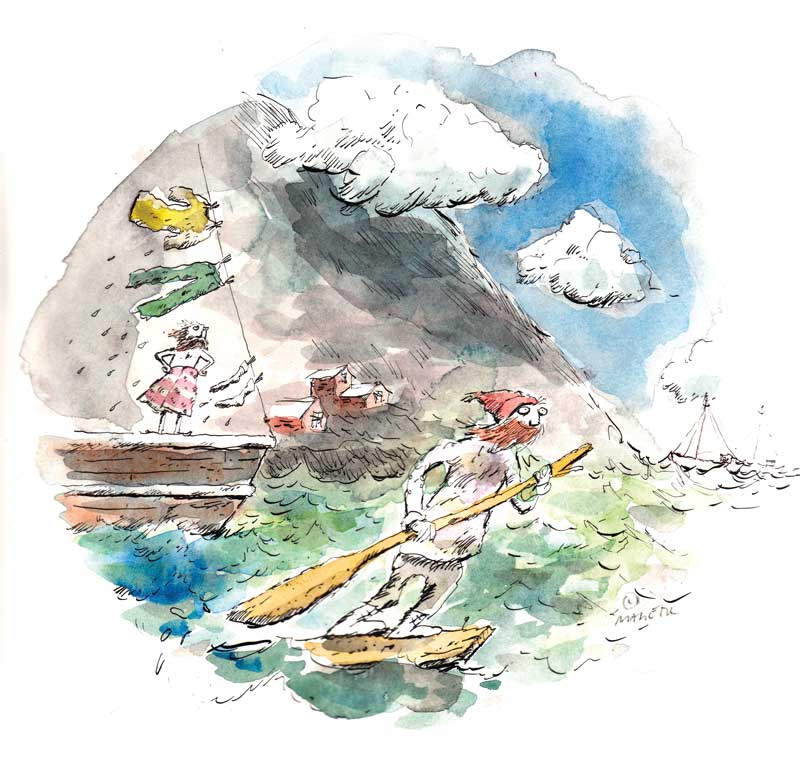 Lars Oars, as they were called for years, allowed coastal cruisers to anchor and go ashore on islands without running the big boat aground. They allowed children to move family skiffs around ponds and coves, made crew popular in the college circuits, and were all the rage with fishermen and lobster catchers of all nationalities. Ship chandleries could not keep Lars Oars on the shelf.

Americans are an efficient bunch of talkers. They do not like to labor over too many syllables and have a tendency to shorten things wordy. For example, Bavarian Motor Works has been clipped to “Beamer,” Budweiser Beer to “Bud,” the Volkswagen Beetle to “Bug,” the late Princess Diana to “Di,” and the not-so-late Prince Charles to “ears.”

The same yearning for brevity took place with the Lars Oars; the name was shortened to just “oars,” a word reduction of 50 percent. With all due respect to Lars, it comes as a big relief for those of us who own a pair.

Typically, oars are sold and used in pairs, but not always. Before diesel engines, the Vikings, the Egyptians, the Polynesians, and other seafarers used somewhere between six and 40 oars on just one boat. Modern universities, especially those with buckets of money, use dozens of oars a day on waters like the Charles River and the Thames, skimming rowing shells around. Funded by wealthy alumni, some universities have huge oar reserves.

In contrast, not many of today’s commercial fishermen have oar reserve funds. They mostly recycle—they lose one, they find one on the beach. Their inventory system is far more cost-effective than that of those in academia who employ fund-raisers for big bucks to call wealthy, yachty alumni at home and beg them for money to keep the university’s oar house fully stocked.

Speaking of rowing, I have seen a lobsterman scull a punt forward, while standing up, through a snorty northwest chop with just one oar jammed through a slot in the stern. On top of that, he was pulling on a stuck boot with the other hand, yelling at his dog, talking on his cell phone, and planning his hauling schedule for the day at the same time. This method of one-handed propulsion evolved over the years because lobstermen did not want to go for a long walk on the beach after losing an oar. I know a couple of modern-day fishermen whose sons do not even know that oars are sold in pairs.

Odd as it sounds, I do not know any steroid-laced, varsity sweater-wearing Ivy Leaguers who could scull a boat a fathom. I do, however, know a lot of lobstermen who could row a Harvard University racing shell with two oars so goddamned fast that two overweight men could waterski behind it and the Coast Guard would complain about the wake.

Like people who row, not all oars are created equal. Some are better than others. There are fancy spoon-shaped oars, oars that come in a bag in two pieces that are snapped together, oars that are painted and heavy, and others that are varnished and light. Some oars are homemade and have been used by the same family for generations, like the oars whittled by my grandfather Hammy from a couple of nice cedar fence posts that belonged to a neighbor.

Oars vary in length, width, wood type, shape, weight, finish, and price. In my mind, a cheap oar is the best bet. I admit that there is a certain smugness that comes with owning a pair of clear ash, leather-wrapped, copper-tipped oars. Watching heads turn as you carry them around the club can be very satisfying. But inevitably, you will lose one and will have to buy another matching pair. I would estimate that the mature boater over a period of 1,800 cocktail hours or so will lose 10-plus oars. That means that one needs to buy at least 10 more pair. At $150 to $200 a pair for head-turning oars, that is a lot of money. In contrast, the average lobsterman will spend $9 plus tax on an oar in a lifetime. Based on this analysis, if you aren’t a lobster catcher, it might be time to consider enrolling in a good sculling school.

Seagoing folks owe a wave of gratitude to Lars Oars. Non-seagoing folks do also. Expensive decorating consultants have crossed a pair of oars and nailed them to the wall of summer cottages, creating a nice coastal ambiance. And, if it wasn’t for the smaller oar, also known as a paddle, canoes would be totally useless.

Thankfully, an international group of people has organized to preserve and celebrate the historically significant life and invention of Lars Oars. They have published papers about his past and have hired craftsmen to restore oars made during Lars’s time. These artifacts are kept in a museum in Norway along with a full-sized statue of Lars Oars dressed in period clothing. Each year, a special member is honored for his work and given what is roughly equivalent to a Pulitzer Prize for rowers. The deserving recipient gets to wear a pair of pants for a year that are just like the ones that Lars wore. The award is known as “The Lars Oars Oar Restorers Drawers Award.” Distinguished indeed!

Bob Knecht is a maritime history buff and a partner/broker at Town & Shore Real Estate in Portland. He owns a pair of oars.