More and more women are taking jobs in boat production 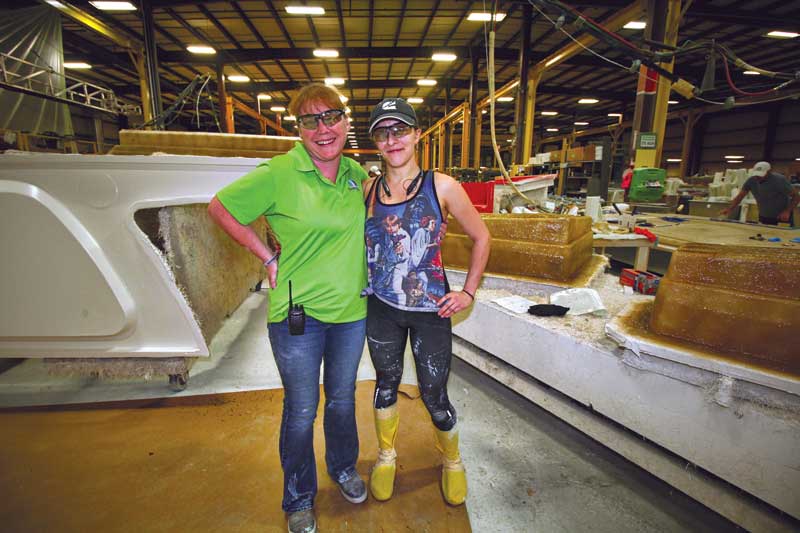 Jena Gelman, right, and Rebecca Brann work in production at Back Cove Yachts in Rockland. Brann says she was one of only a few women working in production when she was hired almost 14 years ago. Today, women make up more than 15 percent of Back Cove’s production workforce. Photo by Laurie Schreiber

The vast production floor at Back Cove Yachts in Rockland, Maine, was a hive of activity one day last autumn, with nearly a dozen of the company’s downeast motorcruisers, in sizes ranging from 30 to 41 feet, in various stages of construction.

In the lamination area, Jena Gelman was getting ready to infuse parts for a 32-footer. Nearby, Monica Kirsch was prepping a deck soon to be popped from its mold. Sherri Grover buffed a pilothouse roof to smooth perfection. Ashley Leigh was suited up in protective coveralls, safety glasses, and a respirator, in preparation for spraying Awlgrip. On the 37 line, electrician Molly Brooks was stringing wire. Nearby, gel finisher Melony Beal was on the lookout for the tiniest imperfections as she buffed the interior of a nearly completed yacht. Through a door that led away from the main floor’s noise and into the quiet woodshop, carpenter Sarah Conrad was finishing a table top with a lovely birdseye center, while Kimberly Cunningham varnished cherry slats. 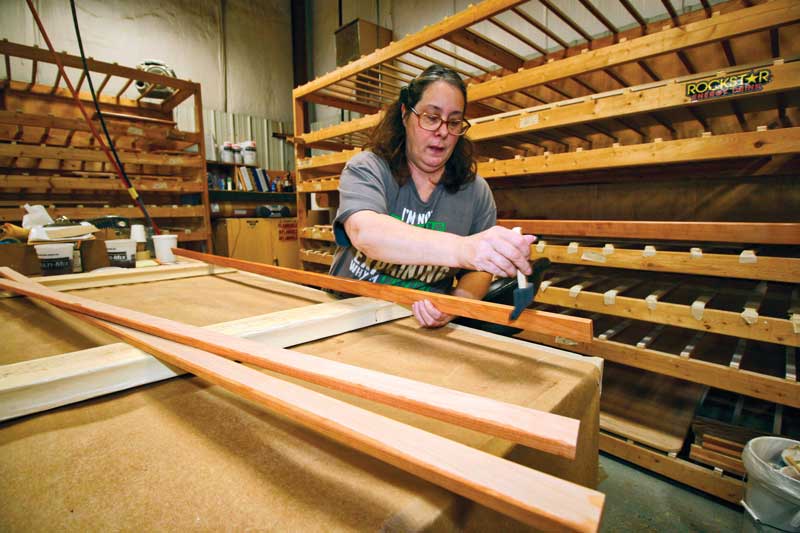 To anyone who follows the boatbuilding industry, something might seem a bit odd about these names—they’re all female. These women, and quite a few others, comprise about 15 percent of Back Cove’s production workforce. Back Cove’s sister company, Sabre Yachts in Raymond, also has quite a few women on its production floor. At both companies, women occupy positions in all areas—from lamination to systems work, carpentry, assembly—you name it.

The workforce at Back Cove and Sabre is not an anomaly. Female employment is flourishing in the traditionally male-dominated boatbuilding and service professions. Women have held executive and administrative positions at a number of yards for many years. However, more women these days also are seeking out, and being recruited for, production and service/repair positions. They’re all ages and come from a variety of backgrounds. At Back Cove, the age range is 19 to 50-something. Some women switched from different careers because they wanted hands-on work creating tangible products; for others, the yard was the next step in a maritime-related career. Women in their late teens and twenties are coming to the field out of high school or college.

Jason Constantine, Back Cove’s president and chief operating officer, said that one factor for increased hiring of women might be that the number of jobs in the industry in recent years has far outpaced the number of job seekers, male or female.

“Companies are going to broaden their search pool in general, which creates more opportunities for more people,” he said. In addition, there’s been an attitude shift. “I think the concept of gender-specific work is outdated, probably not in every industry or everywhere, but certainly in the marine trades. It’s not men’s work anymore. We have women in every phase of construction and they’re just as capable.”

Rebecca Brann has worked at Back Cove for almost 14 years. She came in with no training and was mentored along the way, working her way up from gel finisher to quality management and, for three years now, has worked as prep supervisor. She previously worked for a local credit card company. 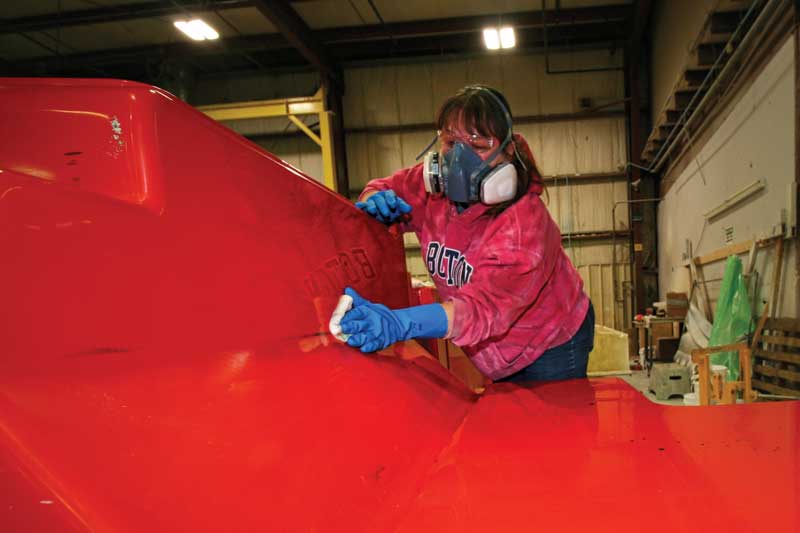 Charlene Robillard preps a mold at Back Cove Yachts. Photo by Laurie Schreiber

“I’m not good at sitting still,” said Brann, a friendly person with an easy laugh. “I was one of very few women in the building. But I loved it—working with your hands, building, learning, teaching. It’s amazing.”

Brann and other long-tenured women recall that a decade ago there might have been just three or four women in production. There’s been a surge in the past year or two.

“I think people are just looking for employment,” said Beal, who has been there five years. She had previous experience working at marinas and grew up in a fisherman’s family. “For example, my daughter works here in gel repair and small parts. She started just two weeks ago. She literally had never held sandpaper before. She was working at Dunkin Donuts and she wanted to learn a trade.” 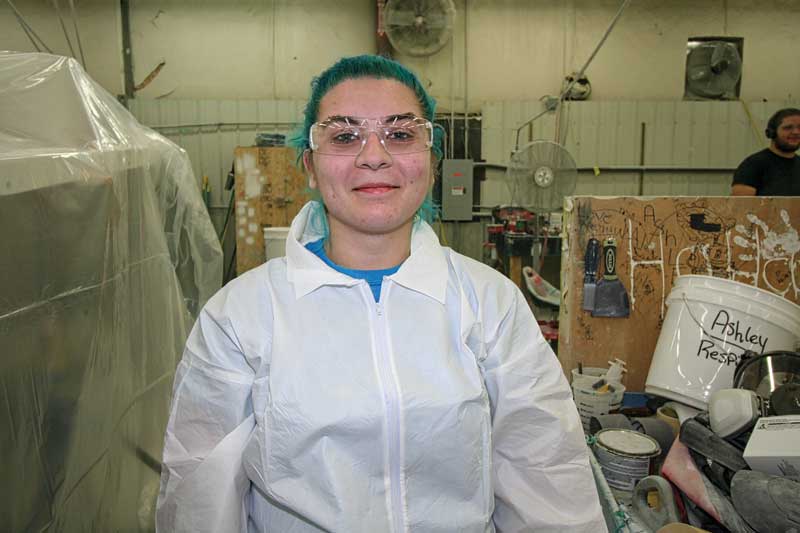 Ashley Leigh, at Back Cove Yachts, is part of a younger generation of women entering the boatbuilding industry. Photo by Laurie Schreiber

Leigh graduated from high school a year ago and decided to apply at Back Cove because her dad works there. From the perspective of a younger generation, she said that, while she doesn’t perceive any barriers to women getting into boatbuilding, some of her friends think it’s a little odd where she’s working.

Brann agrees that, when she hired on, she got strange looks and a bit of “Oh, she’s not going to be able to do it” attitude from others.

“Normal” is what Kirsch is going for. A sailor who previously worked for ExxonMobil as a drafter, she then decided to take up boatbuilding. “I’d rather be known for what I do or don’t do rather than for what I am or am not.”

At Rumery’s Boat Yard in Biddeford, Kirsten Flakne has been in the paint and varnish department for two years. She spent the first 10 years of her career building museum exhibits in Philadelphia.

“That’s where I learned how to fiberglass and how to use industrial paint and varnish,” Flakne said.

When she and her husband moved to Maine, boatyards were on her radar as an exciting next step.

“I was looking to translate my abilities into something practical,” she said. “I loved the idea of being on the water and learning new skills. I just dove into it and learned as I went.”

While just diving in is part of some women’s learning curve, others have training. Kit Macchi has been a carpenter at the Brooklin boatbuilding shop Hylan & Brown Boatbuilders (formerly D.N. Hylan & Associates) for four years. Previously, she studied fine woodworking and held a variety of jobs in Baltimore, Maryland, that included electrical work, demolition, and construction. One day, she was talking with a carpenter friend who suggested she pursue boatbuilding. That brought her to the two-year Apprenticeshop boatbuilding program in Rockland.

“It clicked,” she said. “I love boats and the ocean and sailing, and I wanted to live in places where this sort of work happened. And I’ve always enjoyed understanding the things that I’m using, having that fundamental understanding of construction.” 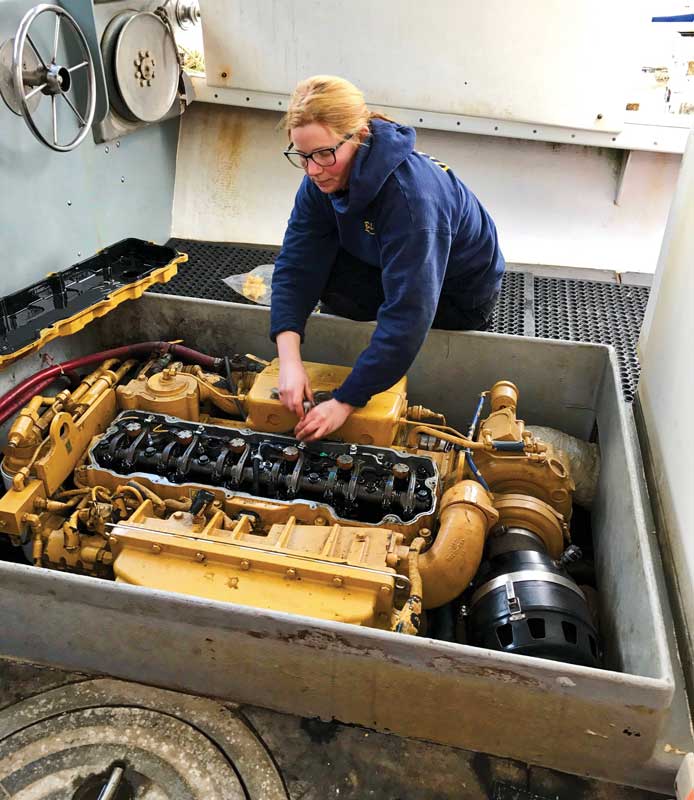 “The standards are different for women and men, whether anyone acknowledges it or not. I’ve lucked out and have people who do not doubt me, and that’s wonderful,” said Liz Monahon, who studied engine repair and now works at Billings Diesel & Marine. Courtesy Billings Diesel & Marine For Liz Monahon, diesel mechanics—a field she was always interested in—seemed out of reach as a woman. But she found her way in. Growing up she worked with her father, a harbormaster on the Hudson River in New York, and then spent many years working for Morris Yachts, as a rigger, heavy machinery operator, and delivery captain at its production and service facilities. Her experience got her an offer from the Northeast Harbor Fleet to run their waterfront operation.

“I started doing a lot of engine work with them and really fell in love with it,” said Monahon.

She found an intensive marine diesel program at a community college in New Brunswick, Canada, landed a work term at Billings Diesel & Marine, the Stonington service yard, then was hired on. Still, she said, it wasn’t a cakewalk.

“You have to spend a lot of time proving you can do simple tasks—and then you have to prove it again,” she said. “The standards are different for women and men, whether anyone acknowledges it or not. I’ve lucked out and have people who do not doubt me, and that’s wonderful, but it’s not across the board. Oftentimes, someone will try and get into the work you’re doing and tell you how to do it.”

Overall, the consensus is that type of old-fashioned attitude will fade as more women enter the profession. Also, there’s little difference in the minds of younger generations regarding the ability of both women and men to do whatever they want.

“I hope that younger women reading this will see that this is a possibility for them,” Monahon said. “These are rewarding jobs, they’re jobs that are always needed, and women are absolutely capable, in every way, of doing them.”