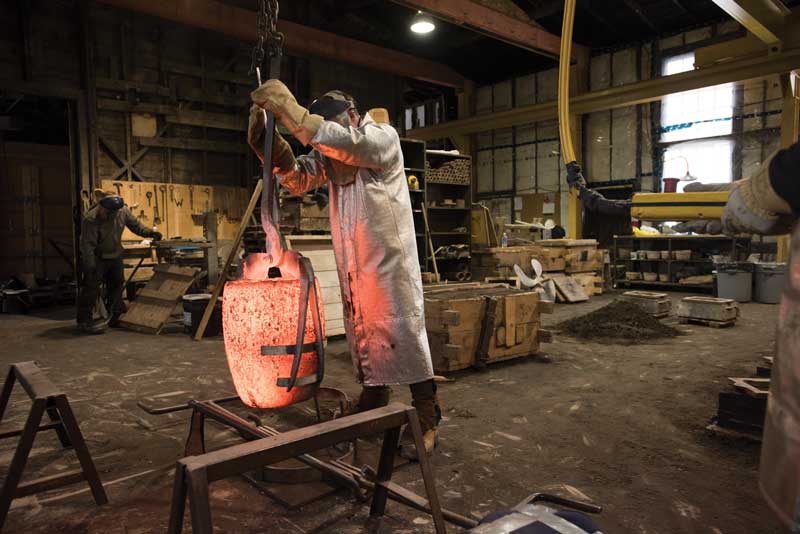 The process of casting nonferrous metals (bronze, aluminum, and brass) hasn’t changed much in the last century. Once the metal ingots have been melted in the furnace, the liquid metal is transferred to a ceramic crucible and rolled along an overhead track to the pouring area. Photographs by Chris Reardon

As a fourth-generation member of the family in charge of the Lunenburg Foundry in Lunenburg, Nova Scotia, John Kinley is eager to serve as tour guide and talk about the company’s future plans to continue to serve the marine industry. When I visited, however, his first task of the day was to search for a piece of the past. A customer had called, asking about an old fishermen’s stove.

Although the foundry doesn’t make them anymore, it was once known primarily for its stoves. Kinley, the company’s marketing director, found the one in question in one of several buildings on the site. At one time, the building was a car dealership. You can still see the darkened ramp inside where Model Ts were rolled down to a train that carried them off. Those tracks are long gone, and the building now houses a tattoo parlor on the ground floor and foundry storage on the second—picture an attic of treasured but dusty family heirlooms. “My grandfather was a pack rat almost. We like to hold onto specific items. I don’t know if it’s a nostalgia thing or if we hope it will be useful in the future,” said Kinley. “We have artifacts that show our business and, more broadly, the marine industry over time.”

Incorporated as the Lunenburg Iron Company in 1891, the company began as a manufacturer of household wood and coal stoves and other iron products. It moved into the marine business when it expanded to stoves and hardware for fishing boats. Then it started making engines, beginning with the popular Atlantic make-and-breaks and progressing to heavier diesel engines. In 1921, it was the first company in Canada to install a diesel engine in a fishing schooner. The foundry grew to incorporate a shipyard in a second waterfront location, and during World War II employed 500 people refitting ships for military service.

The foundry continued to serve the fishing fleet, but as the groundfish stock collapsed, the iron foundry shut down. Production of stoves ended, and the engine shop closed. The iron foundry smoke stack still stands tall in the foundry yard, stripped of its surrounding building.

Today, the renamed company, Lunenburg Industrial Foundry & Engineering, employs about 50 people, divided among the foundry for nonferrous metals—bronze, aluminum, and brass—its machine shop, where shafts manufactured elsewhere are precisely machined, and the shipyard.

While much has been modernized, in the metal foundry workers still melt and pour metal into molds, just as they have been doing for more than 100 years.

Each work day starts as it always has, with a foundry worker lighting the furnace. As flames shoot several feet up, he slides a heavy manhole-type cover over the floor opening. The temperature needs to reach 2,100° Fahrenheit (1,300° Celsius)—hot enough to melt bronze ingots into liquid metal.

While the heat builds, the foundry crew prepares the molds. Each pattern is split into two pieces that go into separate wooden boxes, with sand packed around them. Sand is one of the reasons for the foundry’s location: it used to come from the nearby beach. Now the foundry buys an industrial-grade silica—particles are washed and separated by size—sourced from Nova Scotia’s Cape Breton Island, about 200 miles away.

Once the sand is packed tight, the pattern halves are removed, leaving a void that is the mold. The two boxes are then joined, creating a hollow mold of the complete object to be cast. Eventually, when it’s time for a pour, these boxes line the floor of the foundry. 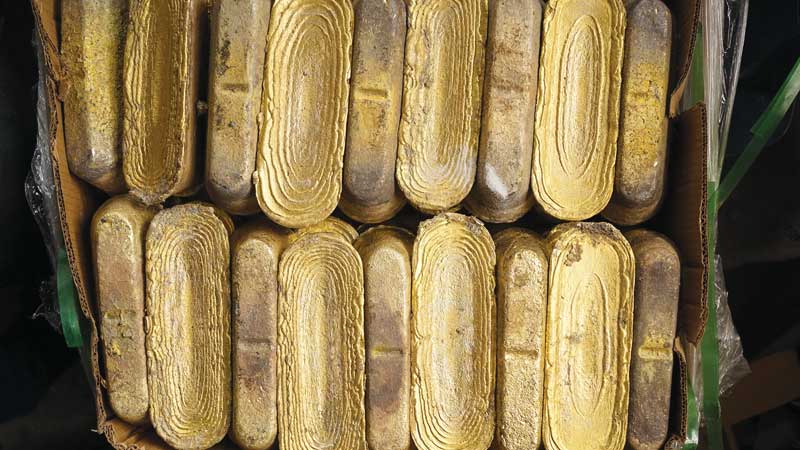 The pour does not take long. Wearing protective goggles, the team of workers rolls a ceramic crucible along an overhead track from the furnace room to the room with the prepared molds. The crucible can hold up to 400 pounds of bronze, and the foundry can cast up to 700 pounds at a time. The liquid bronze is poured into long-handled pans. Then two workers pour the metal into the molds through holes in the boxes. Other holes allow gas to escape and shunt off excess metal. Typically, there’s one pour a day, two if there’s a big propeller to cast.

After setting overnight, the castings are broken out of their molds and finished. Propellers, for instance, must be ground smooth and the blades balanced.

Though propellers and other underwater gear make up the majority of the castings, the company also encourages artists to use the foundry.

“Everything we make is different,” said Cody Jennings, foundry foreman. He learned metal molding from his father, John Jennings, a former foundry foreman who was an employee for more than 40 years. “There are a lot of little steps. You’ve just got to learn from your mistakes.”

Over the last century, changes in metal casting have been slight. Patterns were once made of wood but are now aluminum because it lasts longer. The chemistry in the sand mixture has been improved and now the sand is packed in by a hydraulic hammer instead of by hand. Though he likes the old ways, Jennings admits these innovations are easier on the body. 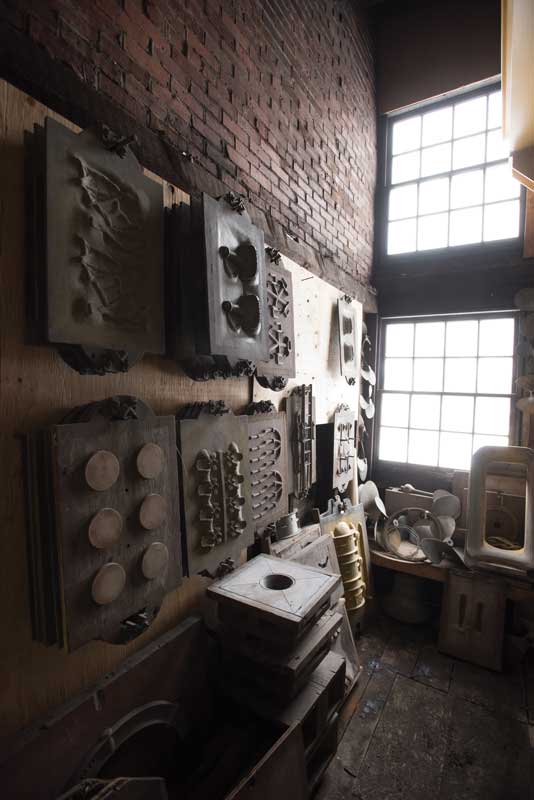 In addition to molds for industrial uses, the firm’s pattern shop includes designs for whimsical small items like doorknockers and plaques. In the pattern shop, patterns of all shapes and sizes line the walls and crowd shelves. Some are as old as the foundry itself, and a boon for restorers looking for near-original parts. But they also include some modern propeller designs made by long-time pattern maker Rodney Zinck. The latest, Bluenose Max, is a more rugged version of the premium Bluenose line for commercial and fishing vessels, with a thicker hub to accommodate bigger shafts. Other propeller lines include the newer Grand Banks for towing and workboats, and the Acadian, which Kinley described as an older design but “robust and still pretty relevant.”

In recent years, the company has become more “project driven rather than industry driven,” Kinley said, focusing more on custom manufacturing. “We get the most revenue from the shipyard line of things. We became more focused on individual boats, projects, and clients.” In addition, that diversity has helped the foundry take advantage of the province’s current boom in boatbuilding. “Most boatbuilders are backed up into the middle of the next decade,” said Kinley, who noted that demand has kept both the service and manufacturing sides of the company busy, resulting in “one of the best falls we’ve had in a long time.”

The shipyard is in a separate location, near the harbor’s mouth. The yard offers services ranging from the run-of-the-mill haul-out and boat storage to more complicated repairs and refits performed by a workforce of engineers, technicians, welders, pipe-fitters, and riggers.

While some shipyard clients, including government boats and private yachts, come from away, they include locals as well. The Picton Castle, a 179' three-masted tall ship used for sail training, has been dry-docked at the Lunenburg Shipyard a number of times for bottom cleaning and painting, mechanics, and welding. A fleet of small lobsterboats uses the shipyard to prepare for a season that lasts from November to the end of May. (Incidentally, this leaves the waters blissfully free of lobster pots during the summer sailing season.)

The foundry has invested in modern facilities at the shipyard, including a 75-ton boat hoist and two marine railways capable of supporting vessels up to 1,200 and 1,600 tons. Pointing to the recent replacement of the 1600-ton track, Kinley said, “It’s steel. It’s designed to stay functional for another 30 years.” Given the company’s venerable history, things will still be going strong.

Melissa Wood is a freelance writer based in Portland, Maine, and Lunenburg, Nova Scotia. Previously she worked as an editor for Professional BoatBuilder, National Fisherman, and Seafood Business magazines. 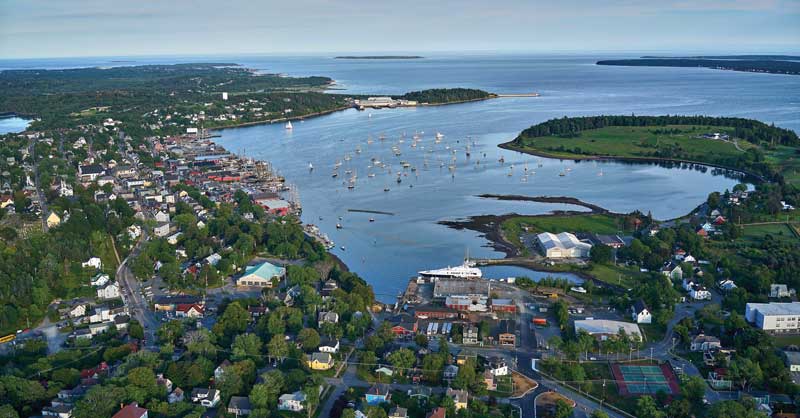 Today, Lunenburg Industrial Foundry & Engineering operates out of two locations: the shop and foundry are located at the head of the harbor, where the large yacht is berthed in this photo. The marine railway and drydock area are at the other end of the waterfront.

A Town Steeped with History

You don’t have to look hard to find traces of the past in Lunenburg. The Grand Banks schooner Bluenose II sits in the same well-protected harbor as her undefeated original—the pride of Canada for her fishing and racing feats. This replica now serves as a beacon to a stream of tour buses, depositing passengers to a waterfront bustling with tourists instead of fishermen. Distinctive red fisheries buildings still line the harbor, but the old fish factory is now the Fisheries Museum of the Atlantic. A “new” fish factory was built just outside of town in the 1960s. That plant still operates, but processes fish mostly from away—its trawler fleet was sold after the Canadian government declared a moratorium on the badly depleted cod fishery in 1992.

The harbor draws superyachts as well as smaller boats. They come  not just for marine services but also to take advantage of the amenities in Lunenburg—and the added incentive of a currency conversion that favors the U.S. dollar. Protected by the town’s status as a UNESCO World Heritage site, many of the colorful shipwright and fishermen’s homes overlooking the water have been converted into restaurants, gift shops, art galleries, and other businesses ready to serve the booming summer tourist trade. Three bookstores reside in one block in a town of just under 2,400. “The art community has taken off here,” said Peter Kinley, John’s father and the president of the Lunenburg Foundry. “There are more galleries in Lunenburg than anywhere else in Canada east of Quebec City.”

Lunenburg’s cultural boom includes young people, too, working in the arts and on the water.