“Beneath the winter’s chilling snow, the heart of summer beats below. Beneath the old world, you can see, there breathes a new world that will be.”     —From Old Coyote

As winter backs down, some of its aggravations hang on, and no self-respecting almanac should be without a few home remedies. So here we go: First and foremost is the virus that sticks around like a burr on a dog’s back. At our house, we like to treat it with the old standards of elderberry syrup, chicken soup, and rest, with perhaps a wee dose of ardent spirits in the evening. If that doesn’t work, we’ll try the opposite: drinking just water with vigorous exercise; working up a good sweat to burn up the bug and push it out through the pores. 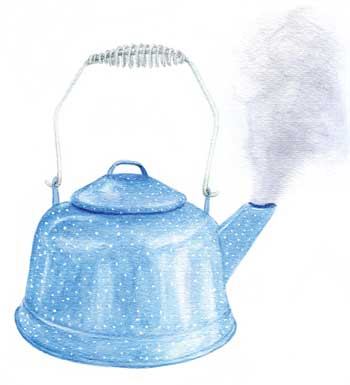 Illustration by Candice Hutchison The next hibernal aggravation is the dryness of the house and everything in it. Keep a pot or kettle of water steaming on the woodstove. A very light coat of olive oil or sesame oil can soothe the skin, and for cracks on the hands, good old bag balm or petroleum jelly is helpful. If you have musical instruments, you might want to put half an apple or potato right in the case with your guitar or fiddle to keep it from cracking, too.

Next, and most dire, some may find that living and working through the winter in close quarters with other mortals can be an aggravation. What to do? A wise friend once said to me, “Be careful pointing fingers. It’s probably not always a beautiful dream living and working with you either, so take it easy.” Old fashioned politeness—please and thank you—goes a long way when the specter of cabin fever lurks in the shadows. Try planting seeds together on the window sill, singing or dancing or playing music, going on long walk/talks together outdoors, and becoming a local distributor for hugs and pats on the back.

We are seeing numbers of robins feeding in the mountain ash and chokecherry trees. Blue jays, too. Starlings are flocking here on Moose Island and when we see starlings, then redwings and grackles cannot be far behind. Goldfinches, chickadees, and surprising numbers of red-breasted nuthatches visit the feeders, while small sparrows with a rufous patch on the head creep around on the ground picking up what the others have dropped, grateful for the offerings.

With warmer weather the snow cover goes down, revealing what has been hidden for months. Leaves, damp seeds, bits of bark and moss and lichen, twigs, feathers and bones begin to show, piling up on each other as they are drawn down to the earth that is their home. The soil gave them life, formed them into elegant and lyric shapes which flung into the sky or skipped across the ground. Now they return to build up the life of the soil again. A history of the past winter is recorded in the sinking snow for all to see, and a few to read.

Soon this history will be lost as the ground warms up and hungrily devours the remains. It is easier not to look, really, but the destruction of winter is partner to the production of summer. They are death and life, yin and yang. You can’t have one without the other.

We have been enjoying some nearly perfect pruning weather, cold at night and comfortable during the day. If you have fruit trees on your land, this is a good time to prune. Get yourself a curved pruning saw, a pole pruner, and a light ladder. First, cut out any dead wood, leaving stubs no more than an inch long. If cuts are more than two inches in diameter, I recommend tree paint. Then cut out smaller branches that are growing either mostly up or mostly down, any that cross over or rub against another, as well as any that grow too closely together. Remove no more than one quarter of the tree in a given year.

Prune evenly throughout the tree not just near the trunk or branches lest all the apples grow at the ends of the branches and cause them to break with a heavy crop. The apple tree will reward us many times over. Two good apples will give us the strength to prune one tree. In the generous economy of Nature, this tree may yield bushels in return. 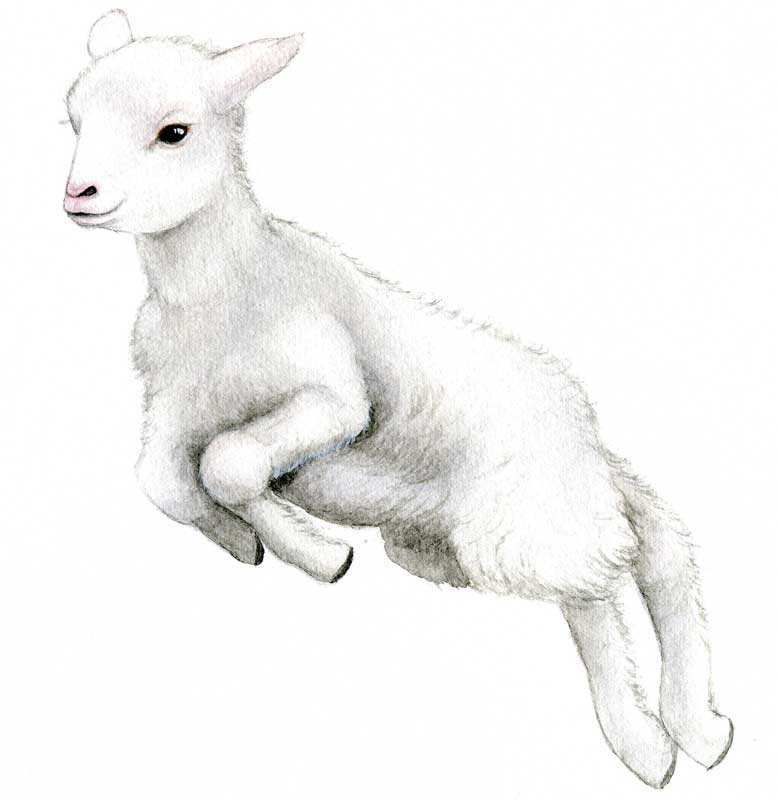 Illustration by Candice Hutchison In New England there’s an old saying, “You’ve got to get over March Hill” and so we did this past week. Some of us may be feeling as though we are over the hill in more ways than one, because even a mild winter can be a long slog from the short cold days and long dark nights of late November to the icy rains and chilly fog of late March. Memories of the warm seasons have faded so far away that it can be a shock to look at a photo from last summer and be blinded by the bright colors; or to smell the sea or sun on earth again after many months. It’s as though we live in two worlds—one cold, white, and brown, which we are leaving, the other warm, blue, and green, to which we are going. With April opening up before us and daffodils, singing birds, and skipping lambs waiting in the wings, we are going to a warmer place without even leaving home.

Rolling along the Black’s Woods Road one day this past week we saw a sleek shape running on the remaining ice of a nearby beaver pond. It was not a beaver. We stopped and slowly approached the pond, which was mostly covered with white ice with a few holes of different shapes and some black tussocks, sticks, and snags breaking the surface. We soon saw a thin wake in the water and then a river otter, shiny, black, and pointed, emerged onto the ice.

River otters (Lutra canadensis), Kiwonik in Passamaquoddy, often live near beaver ponds, in burrows in the banks. There have been cases of otters actually living with beavers in their lodges, a remarkable thing considering that otters are not averse to eating young beavers. The otter is a carnivore, a member of the weasel family, while the beaver is an herbivore and a rodent. For their part, beavers spend most of the winter holed up in their lodges, staying warm and dry, and probably muttering endlessly about the poor poplar crop last year. Otters, on the other hand, love to play out on the ice and will flop on their bellies and push with their back feet to scoot around like bobsledders.

On this day, the otter played hide-and-seek with us. She would pop out of a hole in the ice and look right at us for a moment then disappear again to emerge from another hole. Curious, quick, and busy, she didn’t stay long in one place. With the sound of water running through the dam, the sight of pussy willows peeking out along the banks, and a warm sun in a blue sky, it was easy to sense spring fever in the air as she frolicked on the thawing pond.

There’s a big old horse chestnut or “buckeye” (Aesculus hippocastanum) standing by itself in the field by our house that overlooks Passamaquoddy Bay. Over the years—among other indignities—it has been struck by lightning, had its top blown off in a gale, been roughly pruned back with a chainsaw, had a large light nailed to it, and steel plates were attached to it for unknown reasons. The ground beneath is littered with its dead leaves and twigs and soft prickly husks all turned a dark cinnamon brown.

From a distance, the big buckeye looks dead, but come a little closer and you will see that it is covered with hundreds of sleek, waxy buds about the size of an olive pit, just waiting for the right time to burst open and put forth a new robe of tall, spired flowers and huge palmate leaves. Even if this monarch falls in the next storm, its life will go on through the hundreds of buckeyes squirreled away in the ground all around. I carry a couple of them in my pocket to borrow some of the power of indomitable life embodied in that beleaguered tree.

The lofty clouds of spring are to the lowering clouds of winter as the Rocky Mountains are to the Great Plains. Winter clouds are mostly flat and colorless, spreading a monotonous, unbroken gray from horizon to horizon.

But the clouds of springtime rise high into the heavens like towering peaks touched by white and gold, red and orange, great weightless mountain ranges drifting across the sky. Every now and then one of these mile-wide floating mountains will pass over, trailing a veil of rain to soak the thirsty earth below, like a colossal Portuguese Man o’ War sailing through the atmosphere.

These clouds are not yet ethereal Everests and Denalis, like the grander clouds of summer still to come, but they are flying Adirondacks or Alleghenys or Awanadjos, quite grand enough to lift our winter-weary hearts to new heights.

Rob McCall lives way downeast on Moose Island. This almanack is excerpted from his weekly radio show, which can be heard on WERU FM (89.9 in Blue Hill, 99.9 in Bangor) and streamed live via www.weru.org. Sign up for Rob’s weekly emailed Almanack at awanadjoalmanack@gmail.com.