Back in the days when lumber traveled by water 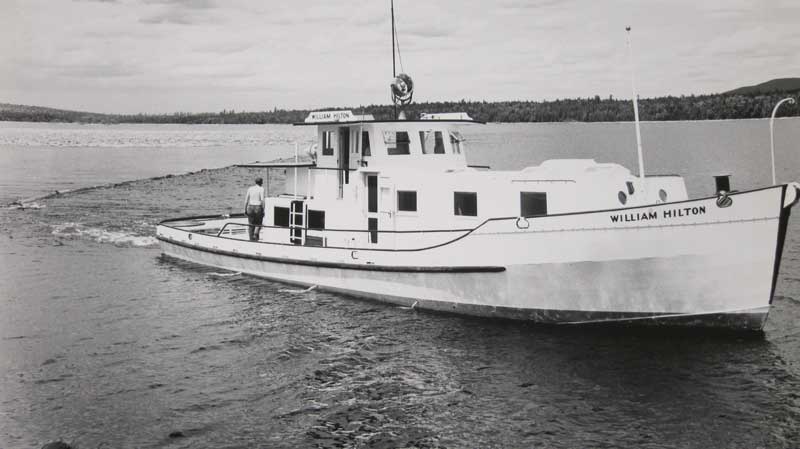 Back in the days when lumber was floated across lakes and down Maine rivers to the mills, back in the days when the paper industry in the state was booming, the work required an especially tough type of workboat. Here is a story about two of those log boom tugs.

Great Northern Paper Company’s steel tug, the William Hilton, named for GNP’s vice president of engineering and woodlands management, was built at the Goudy & Stevens yard in East Boothbay in 1961 (Hull No. 192). Three years later, a nearly identical steel tug, the O.A. Harkness was built at the same yard (Hull No. 199). It was named for Orris Albert Harkness, a Camden native who became GNP’s superintendent of motorized equipment and the so-called “Admiral” of GNP’s inland fleet. The cabin was built at Bath Iron Works in Bath, Maine.

Both vessels were designed by naval architect Geerd Hendel. Born in Hamburg, Germany, Hendel came to the United States in November 1928 with a visa and worked in New York City in the office of naval architect Theodore Wells. He became a U.S. citizen in 1936, and established his own independent design firm in 1945, in Camden, Maine. Hendel gained fame as a naval architect both in the United States and Europe for his many innovative designs of aluminum luxury yachts, launches, and sailboats. He also designed workboats: steel fishing vessels and tugboats.

The Hilton and Harkness were each 70 feet long with a beam of 20 feet. They were powered by two 250-hp General Motors diesel engines. Two generators powered a 120-volt electrical system and heating system, and the cabins included a pilothouse, dining area, crew’s quarters, and head.

Columnist John Gould wrote in the Christian Science Monitor in 1993 that the Hilton was “mostly a power plant. Twas said that she was capable of jerking the Empire State Building right over into New Jersey.”

The William Hilton was based on Chesuncook Lake in northern Maine, and operated as a tow boat for log booms. A crew of six operated the boat—originally around the clock—navigating by compass, searchlight, and skyline landmarks. Later, towing was limited to daylight hours. To tow the pulpwood, a double loop or “bag” of boom logs was created; each was about 26 feet in length and tied together with heavy chains. Towing across open lakes was relatively simple, but the tug could only move at one mile per hour because higher speeds caused the pulpwood logs to jump over the back edge of the boom. Maneuvering booms through narrow channels could be tricky, limiting the number of logs that could be towed at one time.

Wind storms also could cause an entire tow to be abandoned until the weather moderated. Large lakes are susceptible to wind effects, and as the third largest lake in Maine, Chesuncook could be significantly impacted: “Flint Johnson, who cooked on the Hilton, once told me that they towed 50,000 cords of boomed pulpwood into the lake’s wind for 17 hours, and ended up five miles behind where they started,” Gould reported.

Home port for the O.A. Harkness was at North Twin Lake near Millinocket, and she was used to tow log booms along the West Branch of the Penobscot River across Ambajejus Lake, Pemadumcook Lake, North and South Twin Lakes, and Elbow Lake. This was a distance of about 14 miles, and between 2,500 and 3,000 cords were brought to the Great Northern mill in each tow. 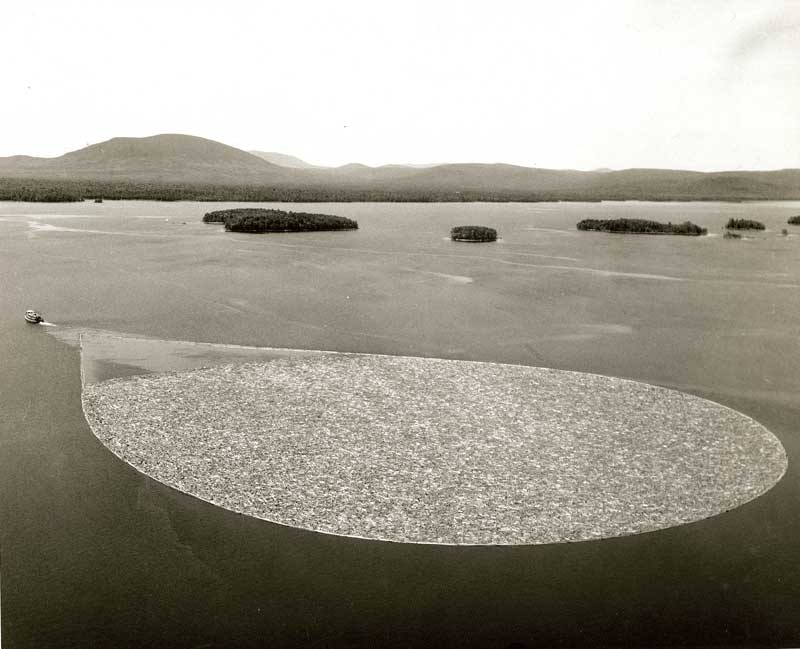 This aerial view shows a paper company tug towing a pulpwood log boom destined for a log drive. Log booms could be as large as 20-30 acres. The tugs had to be tough and powerful to haul so much. Courtesy of Special Collections, Raymond H. Fogler Library, University of Maine, Orono, Maine

GNP estimated that the O.A. Harkness handled about 120,000 cords of pulpwood annually. Figuring 60 to 65 logs per cord, the Harkness had towed enough pulpwood, if placed end to end, to reach about 46,000 miles, equal to a chain of logs circling the earth twice.

The two vessels became available for purchase when Great Northern phased-out its river log drives in 1971, in part the result of work on the Clean Water Act, which became law in 1972. Maine’s U.S. Senator Edmund Muskie, who sponsored the bill, was from the paper mill town of Rumford. While he knew how much logging and paper mills added to the Maine economy, he was also aware of their detrimental effect on the environment, such as the impact on water quality by paper mill water discharges and the destruction of fish spawning habitats when the bark from logs settled onto river bottoms. Logs floating down rivers also disrupted boaters and fishermen.

Paper manufacturers adjusted their methods and began to transport logs by truck, building hundreds of miles of logging roads and constructing some new mills.

The William Hilton was bought by Captain Eliot Winslow of Southport Island, Maine, around 1972, according to his son, David Winslow of Winslow Marine in Falmouth. The vessel was taken to Bath Iron Works, sandblasted, and put back together. The engines were replaced with Detroit Diesel 12-71s. Winslow Marine renamed her Argonaut and used her as a tug, but also secured Coast Guard approval to carry 69 passengers for fishing and sightseeing. David Wilson observed that Argonaut was not really set up to carry passengers and wasn’t well-designed for use as a harbor tug. Winslow Marine sold the boat to Gibson Construction of Portland around 1985, and it was used for at least eight years. John Gould reported that as of 1993 she was a tug in Portland Harbor, but the actual trail of subsequent ownership and the vessel’s current location are unknown at this point.

The O.A. Harkness was purchased by the Maine Department of Sea and Shore Fisheries in 1972. The vessel was transported by truck to Bangor, where it was launched into the Penobscot River to make the trip to its new home port of Boothbay Harbor. 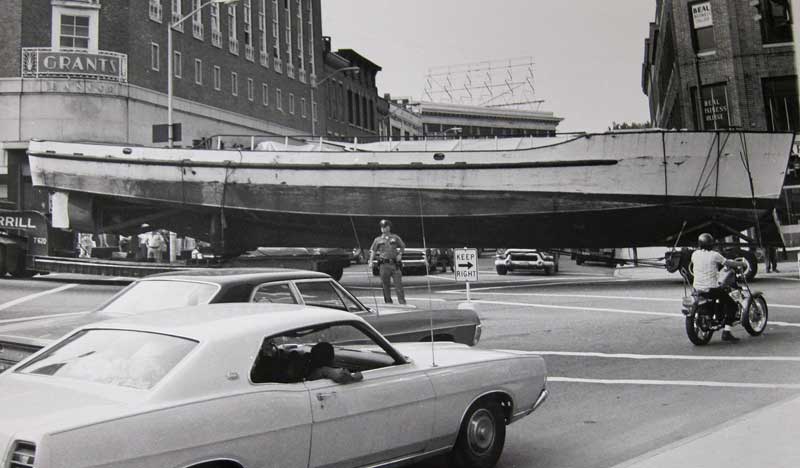 When the William Hilton was retired from its logging work, it was sold and taken to the coast for saltwater work. This image shows the hull as it was trucked through the center of downtown Bangor in 1972 for launching into the Penobscot River. Its cabin was transported separately. Courtesy of Special Collections, Raymond H. Fogler Library, University of Maine, Orono, Maine

It was later sold by the state to Harold MacQuinn, Inc., a construction firm based in Bar Harbor, and used to tow construction company barges around the Maine coast. It was returning home from a job on January 16, 1992, when it began to take on water just two miles south of Matinicus Island, most likely from a leak caused by a snapped rudder post. The O.A. Harkness sank, after dark and in seas with eight-foot swells. The wind-chill temperature was -54 degrees F. When the three men wearing immersion survival suits abandoned the Harkness, one of them grabbed a flashlight. That light, which froze onto his mitten, ended up saving their lives.

Lobstermen listening to the marine radio on Matinicus Island heard the Harkness crew’s radio calls for help, and Vance Bunker and two friends set out in Vance’s lobsterboat to attempt a rescue. A Coast Guard boat was also dispatched from the Rockland Coast Guard Station. With visibilty near zero in the fog and big seas, they might never have found the crew members, who were clinging to a bit of wreckage. But the rescuers saw the flashlight beam through the sea smoke and rescued the three men: Captain Rudi Musetti, Mate Arthur Stevens, and crewman Duane Cleaves.

These two functional and durable vessels, well-designed and adaptable, contributed in unique ways to our inland and coastal Maine maritime history.

The Harkness may have gone down, but its story, and the story of the men who worked on it, live on.

Roger Moody worked in municipal and school management in Maine for many years until his retirement in 2002. This article is adapted from a book he is writing about the watercraft and other timber-transport systems utilized in the North Maine Woods in the first half of the 20th century.