Why let a wheelchair get in the way of adventure? 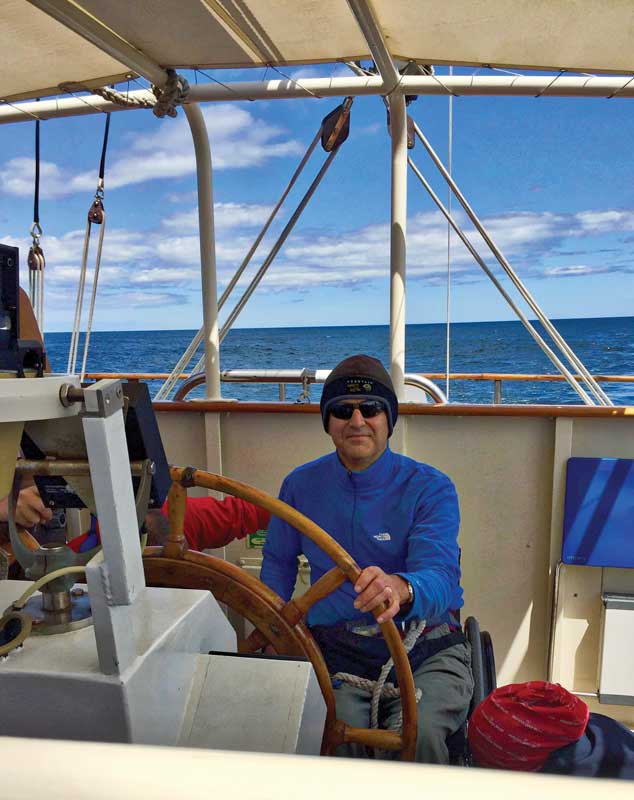 Charles Wienbar enjoys a calm moment at the helm of the Lord Nelson, three days out from Lunenburg. Photo by Sharon Wienbar

Halfway through my watch on our first night at sea, it started to rain. We were sailing from Sydney, Cape Breton Island, to Lunenburg, Nova Scotia, aboard the Lord Nelson, a 160-foot, three-masted barque commissioned to the Jubilee Sailing Trust. This was my first trip sailing the open ocean and after sitting in the steady rain for 45 minutes, I was led to the question: why did I pay to do this? 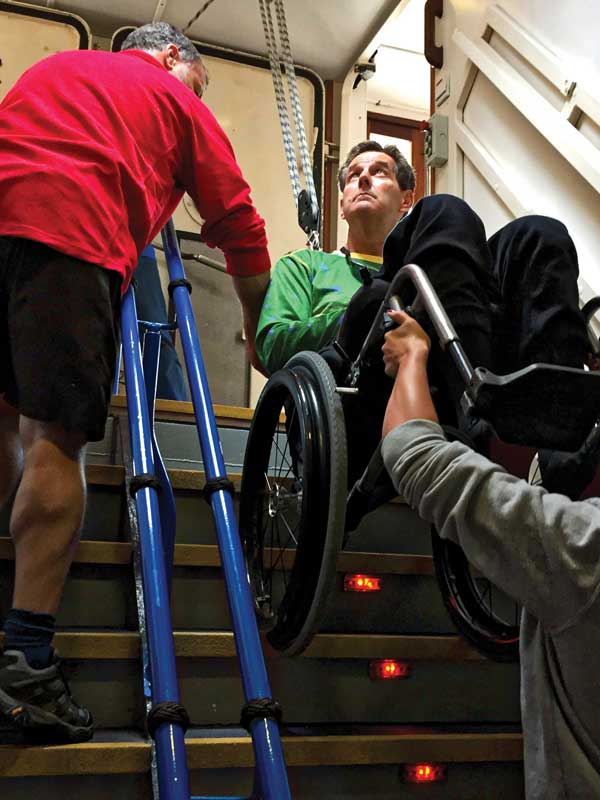 The ship has two wheelchair-accessible lifts to transport passengers between decks. Photo by Sharon Wienbar The Lord Nelson and her sistership Tenacious are tall ships designed to be crewed by passengers with a range of physical and developmental disabilities. A permanent crew of 10 provides direction and know-how, but the 40 passengers pull the sheets, helm the ship, stand watch, serve the food, and swab the decks.

Since becoming wheelchair-dependent (I have multiple sclerosis), I have been a regular dinghy sailor with a local club in San Francisco that has specially equipped boats. I putter around the bay for a few hours before hitting the club for happy hour and then go home for a shower and a good night’s sleep. Sailing has become my passion, but I was curious to get out on the ocean, to know the open sea. To sail in protected coves is one thing, but I longed to really sail. Which led me to book the trip on the Lord Nelson.

The schedule had us boarding at 2 p.m. on a Saturday afternoon. My wife, Sharon, and I were shown to our very cozy bunks, and then met the captain, crew, and other passengers. We were given a brief orientation and then left in the charge of our watch leader. 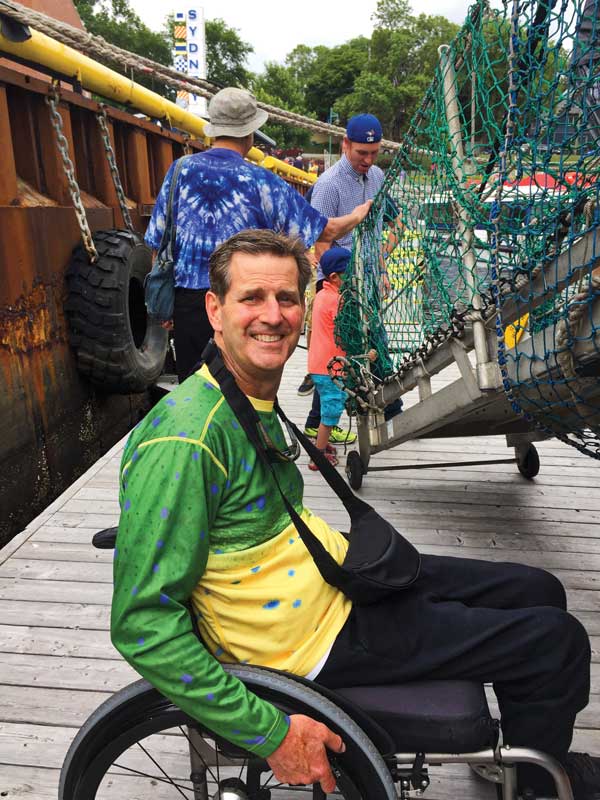 The author, back on shore after five days at sea. Photo by Sharon Wienbar We shoved off at 6 p.m. that night, and our first watch was set for 8 p.m. to midnight. After a hearty dinner and decking ourselves out in foulies and safety harnesses, we settled into our watch. Around 10 p.m., a steady rain began to fall. By that time, the Lord Nelson was also pitching and rolling through swells, leaving most of us feeling at best quite queasy. I will leave it to you to imagine the worst.

Enduring that night outside in the rain was both the worst and best of times. It was cold, rough, and wet, but I was also awed by the magnificence of the ocean around me. I was a speck out there, a part of something much bigger.

The rain let up at the end of our watch as we went below to dry off, warm up, and rest. The next day was clear, but the wind was blowing from the southwest, just the direction we were headed. The Lord Nelson is rigged with square sails, and is not designed to tack close to the wind. That meant we would be under power for the duration of the voyage. With few other options, we settled into the rhythm of life on board.

It has been said that open-ocean sailing is like camping on the water. The beds are uncomfortable, the food selection is limited, and you don’t see many people. After five days aboard the Lord Nelson, I enthusiastically agree. But whether you are able-bodied or not, there is something magical about open-water sailing—a beautiful feeling of connectedness. The end that justifies it all is simply making the journey and getting out there.

In these modern times, there is no reason to sail the ocean other than to know that you can do it. Through the rough weather, uncomfortable bunks, and all the physical challenges, I found great joy in just being there—on the midnight watch under a full moon, looking out to the edge of the world where the sea meets the sky, and coming into port after five days of beating into the wind. It was totally worth it and I can’t wait to go again.

I am forever grateful to Jubilee Sailing, the captain, crew, my fellow passengers, and Sharon for getting me out there.  Me in a wheelchair, out sailing the high seas. How cool is that?

Charles Wienbar lives in Northern California and most Saturdays will find him sailing San Francisco Bay with the Bay Area Association of Disabled Sailors (www.baads.org).