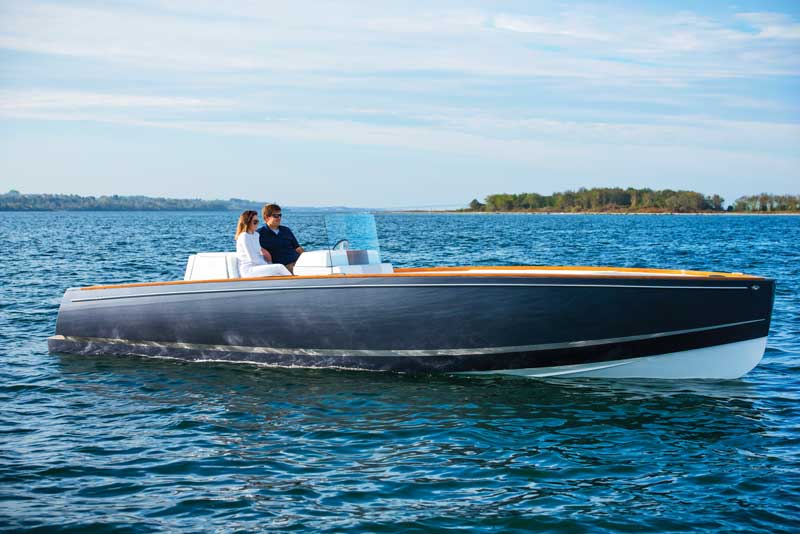 When the Hinckley Company created its prototype picnic boat named Dasher in 1994, the concept of a jet-powered, downeast-styled yacht was utterly new and different. But the design took off, and the launch of the company’s 1000th jet boat in 2016 proved the risk worthwhile.

Hinckley is breaking out of the box again, this time with an all-electric, 28'6" luxury center-console launch that could be considered the Tesla of the ocean. The first model, which has been making the rounds of boat shows, is also, fittingly, called the Dasher.

Electrically powered launches are not new. Some of the earliest showed up at the Chicago World’s Fair at the turn of the last century. These quiet and efficient boats shuttled thousands of sightseers a few miles to and from the exposition, and were such a hit that they put electric launches on the map. The Electric Launch Company produced electric models for many years, becoming famous also for conventionally powered vessels like PT Boats and sub-chasers before going out of business in 1949. The brand has been revitalized in recent years and produces stylish, old-fashioned launches.

What’s different is that Hinckley’s new Dasher model is ultramodern, and incorporates the latest cutting-edge technology in electric storage, recharging, and propulsion in a planing hull.

Given that this is a powerboat with a performance envelope challenged by many unknowns, it’s not surprising that Hinckley chose Michael Peters as the designer. Peters, who is based in Sarasota, Florida, has designed a half-dozen custom builds at Hodgdon Yachts during the past 10 years, along with the prototype Bertram 35' built in 2016 at Lyman-Morse in Thomaston. He also designed the underbodies of Hinckley’s last four powerboat models.

Those of us with an interest in the science of fast boats recognize that Peters has written new chapters in the evolving science of planing hulls, such as the Dasher’s, including a wide array of modern stepped hydroplanes and unlimited catamarans.

One design feature that must have engendered considerable debate is the elimination of any hybrid backup. There is no internal combustion engine available either to recharge the batteries or to provide a limp-home option once the system nears complete discharge.

A fancy touch screen operating system on the console tracks the boat’s range to prevent such a stranding. Dynamic graphic overlays on the GPS map show the driver how far he or she can go before it is time to turn around. The graphic (a ring showing the range) dynamically grows or shrinks depending on the boat’s speed and power consumption. That same touch screen also controls the lights and other accessories such as the stereo. The motor is controlled by a custom-designed joystick or throttle. 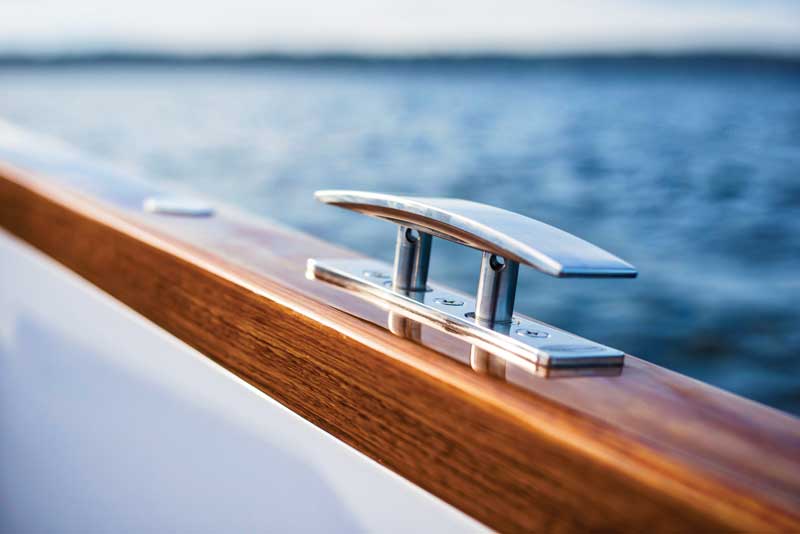 The rails look like teak, but are really handpainted composite, which is much lighter. The deck fittings are lightweight titanium made on a 3D printer. Photo courtesy The Hinckley Company

Maximum range and speed were made possible by making the boat as light as possible. At 6,500 pounds, this is the lightest Hinckley yacht ever built. The hull is infused carbon-epoxy composite. And instead of heavy, varnished teak accents, the Dasher features a hand-painted composite material that looks like real wood but is lighter and requires less maintenance—Hinckley calls it Artisanal Teak. This is an idea I have long suggested. In fact, I faux-painted the fiberglass cabintop of my own sailboat several years ago, and it’s tough to distinguish from real mahogany. Most of the Dasher’s deck hardware is lightweight titanium produced on a 3D printer.

One of the outcomes of a lightweight carbon boat with exceptionally “clean” hydrodynamics is that when the batteries are charged to the max, the powerboat will step out at a livelier pace than any electric launch ever.

The Peters studio considered several alternatives for configuring the drive train, but in the end came up with conventional shafts emerging through dripless couplings. One of the advantages is that maintenance should be simple anywhere in the world. It’s important to note that these Hinckley center consoles can be recharged at any marina that offers shore power, and there are thousands of these. The Dasher is equipped with standard on-board chargers that accept dual 50-amp charging cables, gaining a full charge in under four hours. Its twin 80-hp electric Torqeedo motors are powered by i3 lithium ion batteries made by BMW. 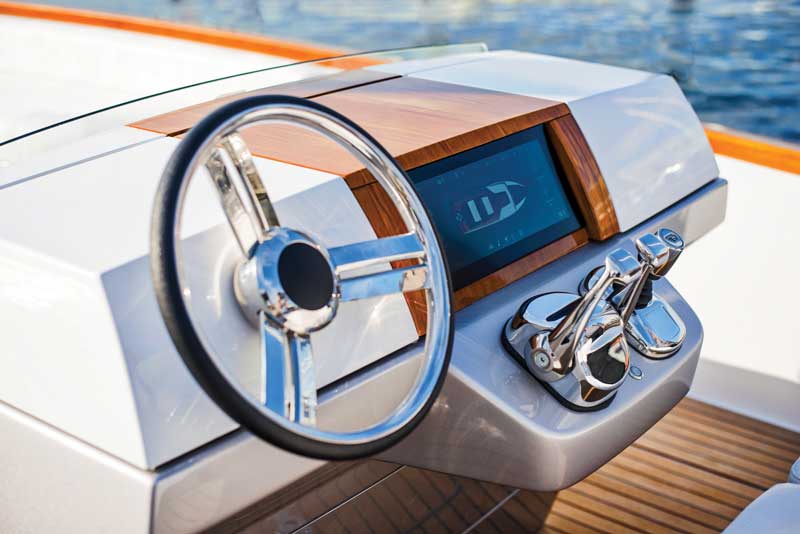 The University of Maine Advanced Structures and Composites Center produced parts of the center console for the prototype Dasher on a sophisticated 3D printer. Hinckley is working on plans for in-house 3D printing. Photo courtesy The Hinckley Company

Peters has always been focused upon the element of weight in his designs. Keeping the weight of a diesel engine, full fuel tanks, and sound deadening out of the equation makes extra room for passengers and increases the short-range shuttling performance in all respects.

The hull is optimized for the load factor and available horsepower and it’s quite a mix of styles. From the side, the Dasher resembles a 1920s Gold Cupper with a marked reverse sheer. The overhead plan view also surprises, with its emphasis upon a breadth of flat cockpit platform. The seating is ultramodern, looking as if it was just relocated from a corporate jet.

For obvious reasons this stunning design has already won several awards, including for being “green.”

Planning for the project began two years ago, when Hinckley convened a group of designers, engineers, entrepreneurs, and naval architects for an innovation summit, according to Scott Bryant, Hinckley’s director of new product development. Both Peters and the CEO of Torqeedo were at that meeting. 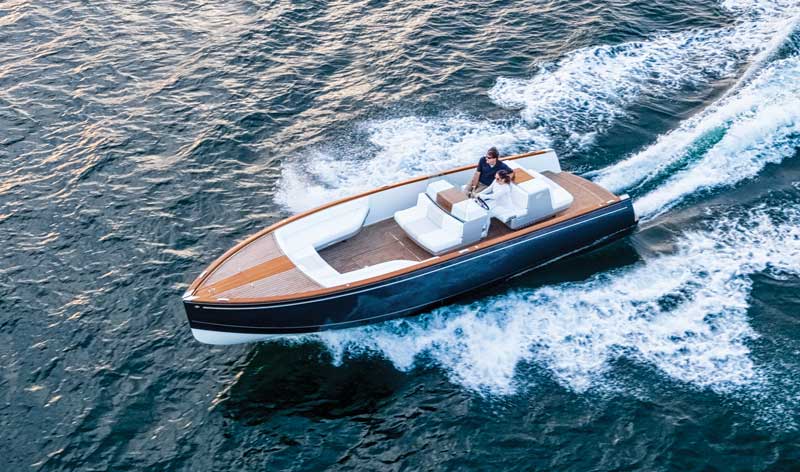 Hinckley estimates the new Dasher can travel 40 miles at a cruising speed of 10-17 mph, and 20-25 miles at top speeds in the 18-27 mph range. Photo courtesy The Hinckley Company

“We talked about electric propulsion becoming more mainstream,” Bryant said. “And we knew we wanted both Mike [Peters] and Torqeedo to be involved. Through and through, Mike understands the way a planing powerboat should perform, and this is a planing boat.”

The idea was to design a powerboat that would give owners the ability to go for harbor cruises and connect with friends and family on the water without the distraction of engine noises and smells. That’s why the driver’s console is in the center, so the owner can sit in the middle with his friends, Bryant said. The windshield is retractable to allow for even more communication. In addition to harbor cruising, the launch also would be perfect as a tender for super-yachts, he noted.

The company is working on a design for a Z-top, which could possibly include solar panels.

The new launches will be built at Hinckley’s plant in Trenton, Maine. The company is taking orders now for summer 2018 delivery.