The exquisite art of sailing a Beetle Cat 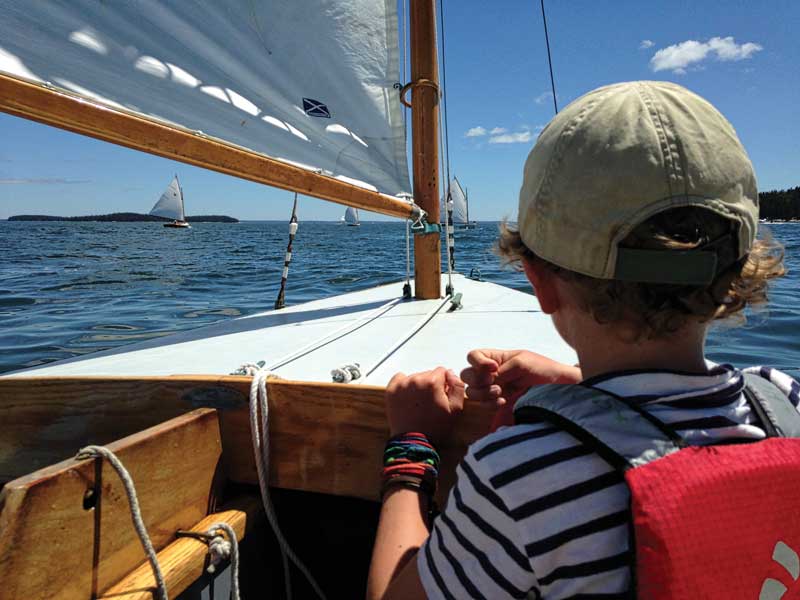 Consider this: my son, age 6, is nestled as close as possible while I crouch at the helm of Sgt. Pepper, a borrowed 40-year-old Beetle Cat with a bright red hull. One of my hands is on the tiller and the other holds him fast against me. It’s our very first time sailing a Beetle Cat. We’re about to start a club race. 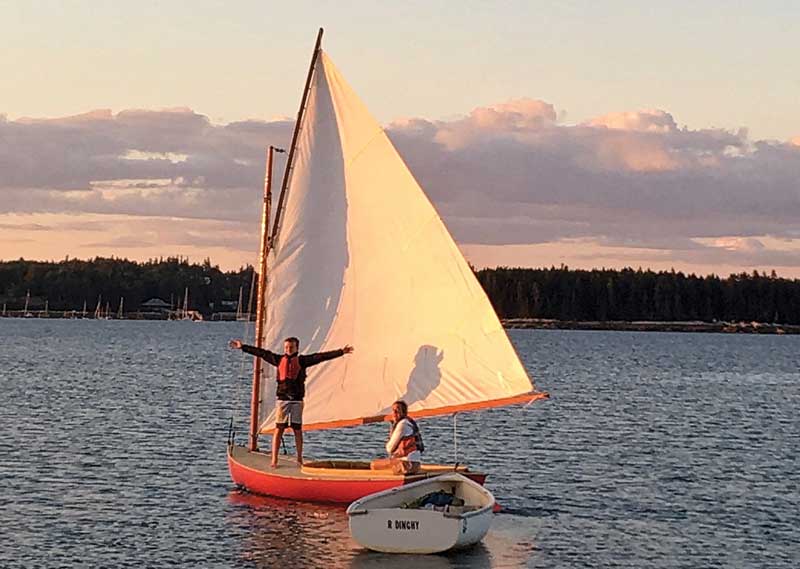 That was five years ago.

I had decided that it was time to try sailing one of these little classic-of-all-classic sailboats. The colorful fleet in our harbor was so alluring in its nimble old-fashionedness. Each Beetle Cat had a wooden hull, big beamy cockpit, gorgeously shaped gaff-rigged sail, thick wooden mast, centerboard—everything beautiful to the eye but utterly unfamiliar to me. How different could it be from sailing Scout, our stable full-keeled Cape Dory 25 sloop? I figured I knew the basics.

It was a typical July sailing afternoon on Eggemoggin Reach, with billowy clouds and a steady southerly breeze. My sweet husband, sensing my apprehension and anxiety, rowed us out, quickly dropped us off, and cheered me on. “It will be no problem, just enjoy it. You’re a sailor!”

Friends in Beetles of their own smiled and shouted encouragement. “You’ll be fine. It’s easy!”

That afternoon was many things, but it wasn’t easy.

Our first challenge was raising the gaff-rigged mainsail. This nuanced maneuver involves hauling on two halyards at the same time, one attached to the throat of the gaff, the other to the peak. The first mate wasn’t much help. Like most six-year-olds, he didn’t do “nuanced.” A nearby Beetle Cat sailor yelled instructions and I eventually got the enormous sail raised.

The jitters set in as we cast off and headed to the start. But Sgt. Pepper was responsive, and managing only one sail felt intuitive. During each ponderous tack, we were careful to duck as the heavy boom swung across the cockpit. From our position sitting on the floorboards, the Beetle Cat seemed nimble, in a leisurely way.

That afternoon’s race was not a typical mild-mannered, round-the-windward-buoy event. The ambitious course had the fleet circumnavigating an island down Eggemoggin Reach, dodging a few other islands and ledges (this is Maine, after all) en route. 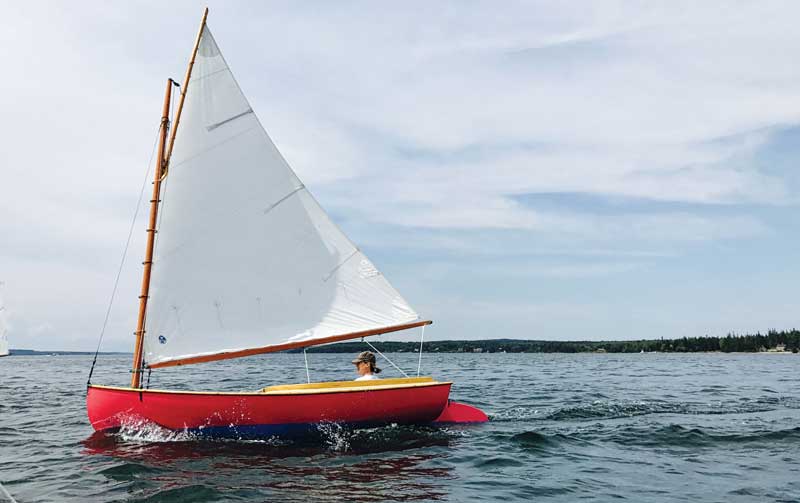 The author, now wise to the ways of Beetle Cat sailing, puts Inconceivable through its paces. Photo by Margaret Sturtevant

I felt the wind pick up as we cleared our protected harbor. Anxiety set in. I considered heading back to the mooring, but wasn’t sure I could maneuver this quick little boat without coaching from another sailor, and they were all out at the start. Pride and determination won over good sense and caution. I wasn’t going to let my first mate see his mother intimidated by wind, weather, wooden boats, gaff rigs, or even granite ledges. No way. This afternoon he was going to witness true sea-womanship.

One of the wonderful aspects of the Beetle Cat design is its closeness to the sea. Sitting on the floorboards you are inches from the water. It’s also one of the less fortunate features, because it means you are always either wet or very close to being so.

We were almost halfway through the race when things took an unwelcome turn. Recovering from a skirmish with a teenage skipper who’d plowed hard into our stern, I jibed too violently. We heeled over radically and took on water. We did not capsize, but the tiller had separated from the rudder and was loose in my hand. As we sloshed around with no steering, tears streamed down my son’s face. “Can you radio the committee boat to come and get us?” he wailed.

Radio? On a Beetle Cat?

I struggled to re-attach the tiller to the rudder, bailed, and calmed myself. We got back on course and rounded the island. At last we were headed downwind toward home. On this point of sail I felt the little boat’s surprisingly mighty weather helm. The tiller trembled with energy in my two-handed grasp. The stubborn little boat seemed to have a mind of its own. I considered beaching in the soft mud at the far end of our harbor instead of trying to make the mooring. But that would have been too embarrassing.

The last few seconds were frantic, with me wriggling onto the foredeck on my belly to grab the mooring stick, leaving the main sheet and sail loose and flapping wildly. I decided my days sailing Beetle Cats were over. Too stressful.

When we returned to shore, friends gave us welcome but untimely advice: The mainsail was probably too far out on our downwind leg and should have been reefed. A secondary version of reefing a gaff-rigged sail, called scandalizing, would have helped too. The technique involves lowering the gaff to reduce sail area from the top down, and is handy in sudden squalls or in the event of an uptick in the wind. We also learned that we should have been sitting farther aft.

Fast-forward four years, to last summer, and the day when my son stood on the float holding his Beetle Bowl prize. He had won it single-handed skippering in another borrowed Beetle Cat—painted fiery pink, and named, appropriately, Inconceivable.

Since my one earlier experience, my son’s intermediate sailing class had been out in Beetle Cats several times a week. I would watch as they effortlessly sailed out into the Reach and back home to their moorings. My first mate was becoming a Beetle expert, and I was jealous. I needed to get back into one of those anachronistic little wooden things. Why? Sea-womanship, right?

On a very calm day, I asked my son to sail Inconceivable with me. He took pleasure in skippering, this time around. I came home relaxed and almost entirely over my fear of the imperious gaff-rigged dinghies. We went together a few more times for short sails. Then my son won the Beetle Cat Bowl—and now it’s my turn to be the first mate.

There’s a lesson in this story: When you set out in a Beetle Cat, you almost always come home a little bit saltier than when you started.

A native Mainer, Basha Burwell art-directs and styles photo shoots all over the US.  She is passionate about the culture of the coast and rows, swims, and sails in water that is almost always cold. She and her family live part-time in Cambridge but feel lucky to call Maine their home. FMI: www.bashabcreative.com