How Paul Rickert’s neighbor became both subject and patron 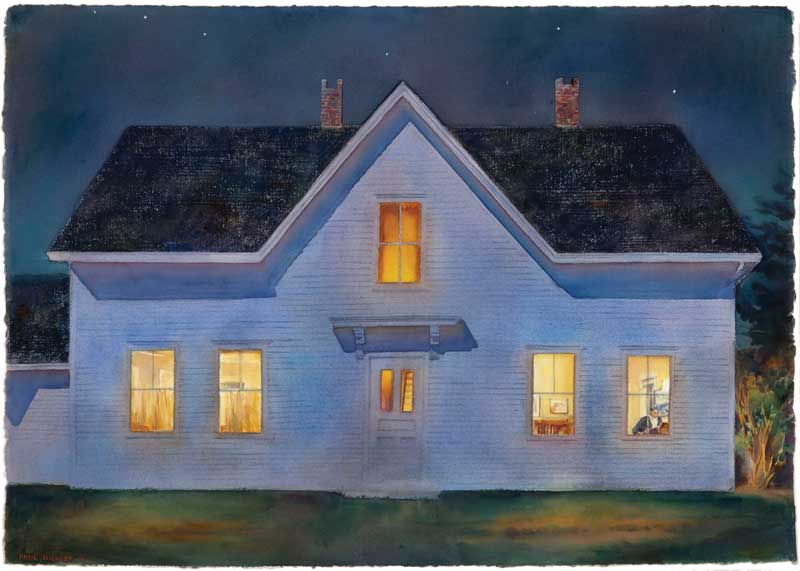 Painter Paul Rickert’s depiction of Susan Myers reading the newspaper in her home in Brooksville (Evening News, 2000, watercolor, 38" x 46") led to a lasting friendship between the painter and his subject. Photo by Ken Woisard

The history of art is full of tales of patronage, from the Medicis to Peggy Guggenheim. Each scenario is different. Some involve commissions, others the accumulation of works of art, still others are defined by personal connections. As a collector, the late Susan Myers fit into the latter category. Finding a painting of her home that included a view of her inside it sparked a close friendship with the artist, distinguished Philadelphia-based painter Paul Rickert.

Their story makes for a compelling chronicle of an artist and his ardent admirer.

It all began on a trip to a gallery in Belfast around 1996, when Myers came across a painting by Rickert that showed her house in Brooksville, Maine. She bought it. But it was the next painting she purchased that sent her collecting into full gear. Reading through an issue of American Art Review, she came across an ad for a show Rickert was having at the Fischbach Gallery in New York City. The painting in the ad was of a house that looked very familiar: once again, it was her own beloved abode in Brooksville, only this time there was a figure in the window, reading the paper, and that person was her.

Pleased and astonished, Myers wrote Rickert an admiring letter, but he mistakenly thought the “Sue” who signed it was someone else, and filed it away without responding. She later saw the painting, Evening News, in person at the Gallery at Caterpillar Hill in Sedgwick, Maine, and bought it. Soon the two, who had figured out that they lived a short distance from each other in Brooksville, became fast friends.

In the years that followed, an annual ritual developed. Rickert would bring three or four paintings to Myers at the beginning of the summer, standing them against the furniture in her Brooksville home. When he alerted her in the fall that he was coming by to pick them up to take back to Philadelphia, she almost always decided to keep them. She also purchased other examples of his work at the Wingspread Gallery in Northeast Harbor.

By the time she died in 2017 she owned around 75 of the artist’s paintings. 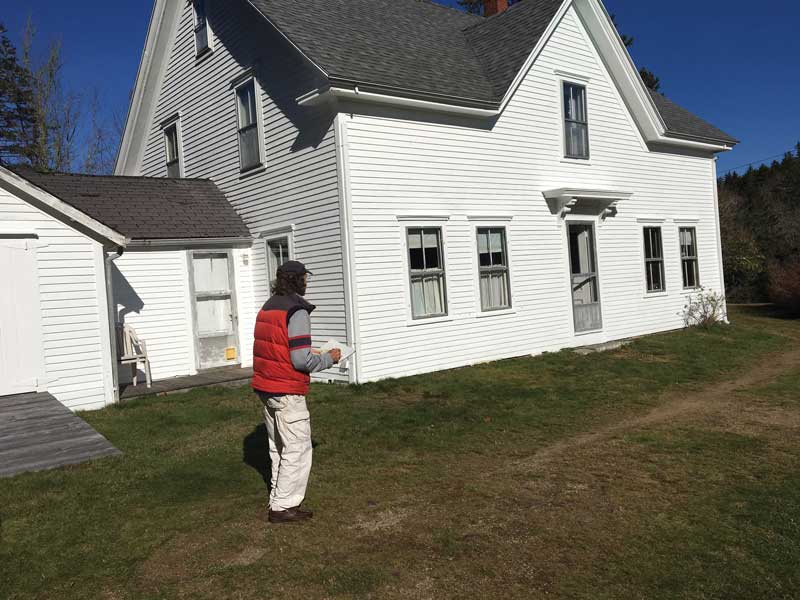 Myers didn’t come to collecting until later in her life, but the inclination toward art started early. Born Susan Abbott in Springfield, Illinois, in 1935, she came from a creative family. Her great-uncle Louis Oscar Griffith (1875-1956) was part of the Brown County Art Colony in south-central Indiana. Her parents, David and Florence Abbott, were landscape architects.

She attended Shimer College in Mount Carroll, Illinois. The school offered a Great Books curriculum that sparked her lifetime inquiry into the life of the mind. She also discovered Maine: on a road trip to the east coast with some of her classmates, she ended up renting a cottage on Gotts Island.

Abbott earned another BA and a teaching certificate, then a master’s degree in guidance and counseling, at the University of Illinois at Urbana-Champaign. There, in the spring of 1959, she met David Myers on a blind date; they married later that year. 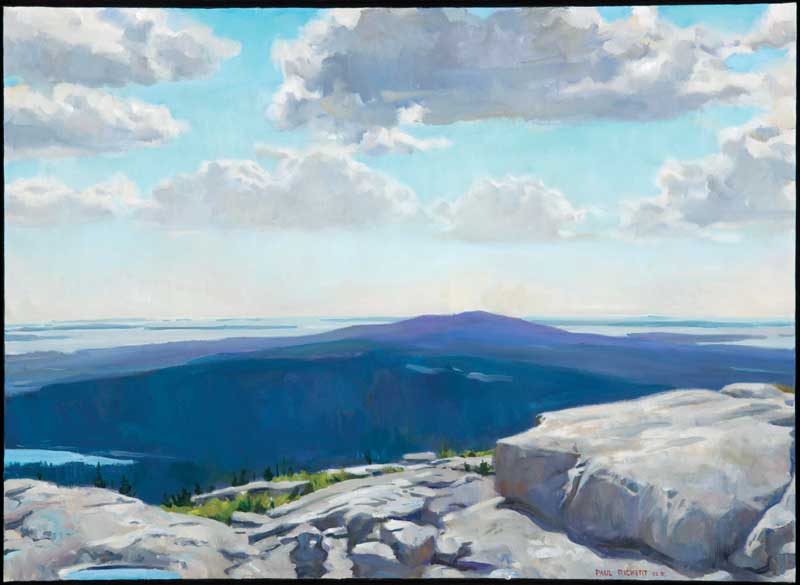 Rickert has painted extensively in Acadia National Park, including this panorama, Atop Sargent, 2001, oil, 22" x 30". Photo by Ken Woisard

When a position came open at the Jackson Laboratory in Bar Harbor in 1964, Sue, as she was known, encouraged her husband to apply; she wanted to return to Maine. He landed the job, and they moved to Mount Desert Island in 1965. David would work at the lab for 17 years and later spend 15 years at the Research Animal Resource Center for Memorial Sloan Kettering and the Cornell Medical College in New York City before returning to the Jackson Lab, eventually retiring as a senior staff scientist.

Sue worked as a special-ed teacher at the elementary schools in Bar Harbor and on Swan’s Island, and was part of an early childhood development program at Eastern Maine Medical Center. Around 1975, the couple moved to Somesville, into a house designed by Robert Patterson (1905-1988) in the early 1950s. The property, which once belonged to Isaac Somes, looks out on Sheep Island and Somes Harbor.

Sue also owned the home in Brooksville, which she had inherited from her father, David Abbott. The two-story Cape, built around 1790, is said to be among the first houses built in Brooksville. Sue would divide her year between Somesville and Brooksville, often heading for the latter in June when Mount Desert Island got busy and loud—she built up a wood pile, sometimes referred to as the Great Wall of Somesville, to dull the sound of passing traffic. 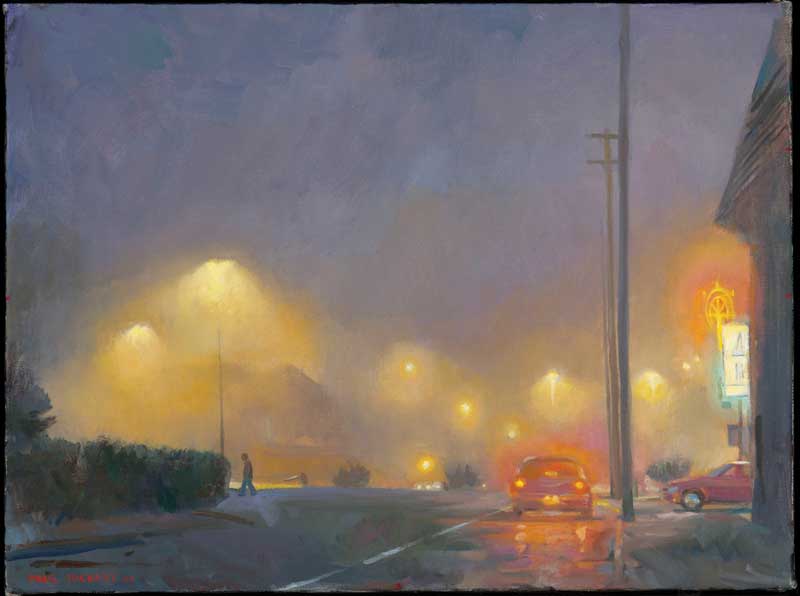 In the 1980s Sue began to immerse herself in art history, studying the creative process and attending art lectures. While she and her husband had purchased a few works of art over the years, she began to collect in earnest after her father died. Rickert’s watercolors and oils of Maine would become her focus.

Like his admirer, Rickert was raised in an artistic milieu. His father, William Henry Rickert, Jr. (1914-2013), was an artist and illustrator. After serving in the Combat Artists Program in Vietnam (he was drafted at age 19), the budding painter attended the Art Center College of Design in Pasadena, California, and studied privately with portraitist Nelson Shanks. He won prizes for his paintings, especially in watercolor, and began showing in New York City.

Rickert first came to Maine after reading Eliot Porter’s Summer Island (1966) about the famed photographer’s life on Great Spruce Head in Penobscot Bay. He became a frequent visitor, painting up and down the coast, with a special passion for Stonington and Acadia. He bought a modest home in Brooksville on a whim in 1973. Exploring the neighborhood, he was drawn to an old Cape he could see from his hillside house. He made sketches and photographed it. And he painted it. 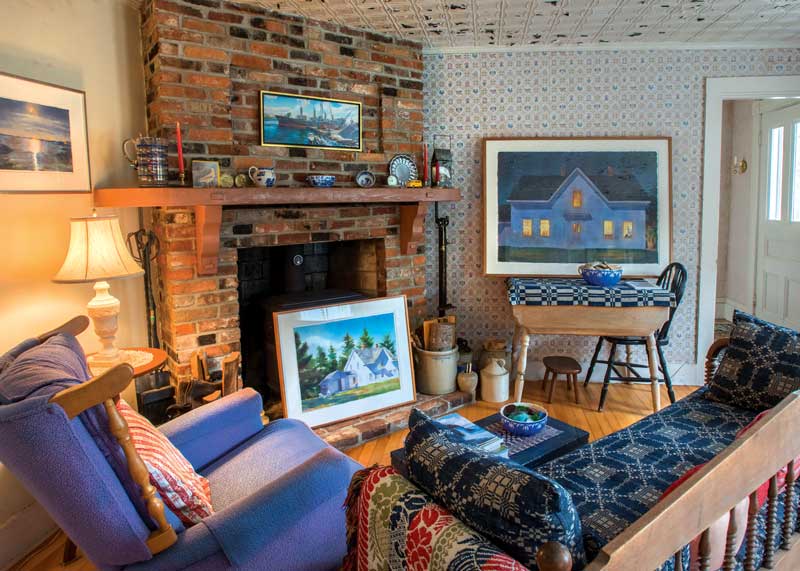 The collector filled her homes in Somesville and Brooksville with Rickert’s paintings. Photo by Ken Woisard

At the time of Sue’s death in May 2017, the houses in Somesville and Brooksville were filled with Rickert’s paintings, nearly every room featuring one or more of his landscapes. She bought a wide range of Maine subjects: coastal panoramas, blueberry barrens, harbor scenes, foggy prospects, sunset and moonlit views. A number of paintings portray Brooksville landmarks: the town office, Condon & Son Garage, Betsy’s Cove, Coleman’s Barber Shop. And a number of them depict her Brooksville house.

Rickert recalled with fondness his many conversations with Sue over the years. They shared poetry and thoughts on art and the world in general. After 9/11 their conversation turned to life and death and the idea of evil. “She was one of those inquiring minds,” Rickert said. 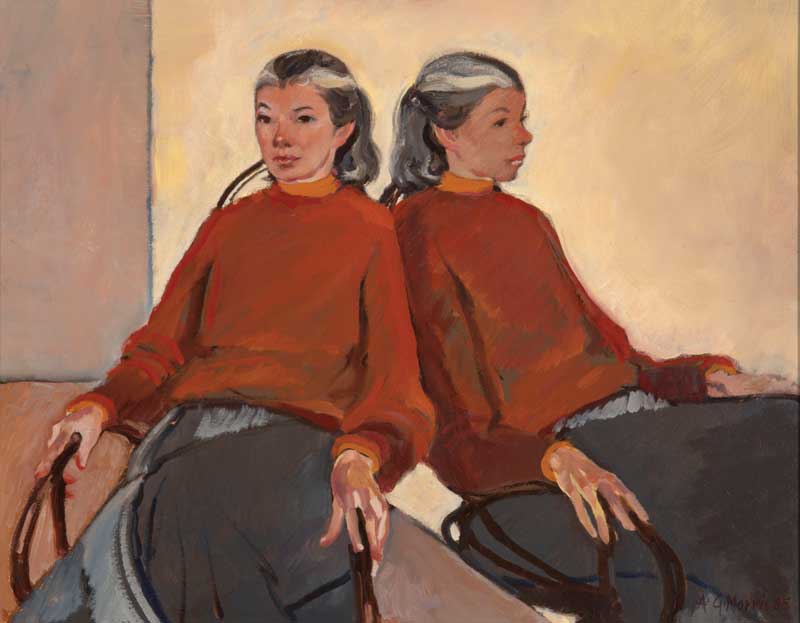 This painting of collector Sue Myers and her reflection in a mirror is by Anne Grant-Morris. Portrait of Susan Myers, oil, 1985, 17½" x 13½". Photo by Ken Woisard

Sue never said explicitly what appealed to her about Rickert’s paintings, although she clearly felt a personal connection to the images, especially the ones that included her house. Her husband noted that she would draw his attention to how the paintings would change depending on how the light hit them at different times of the day. “A painting can be static in a gallery or a museum,” David Myers explained, “but in a home, it has a special dynamic.” He shared his wife’s affection for Rickert’s work, but admits that her collecting “just kind of snuck up on me.”

Sue acquired work by other artists, including watercolors by Bass Harbor painter Ellen Church and individual pieces by Westy Frazier, Wade Hancock, Thistle Brown, and Marianne Hancock, as well as sculptures by Melita Westerlund and Mark Herrington. Other highlights of her collection include paintings by her uncle Oscar; a stunning full-length portrait of her mother by Marie Goth that won a prize at the National Academy in New York City; and a remarkable double portrait of Sue by the British-born painter Anne Grant-Morris.

But Rickert’s paintings rule the rooms, his special sense of place evident on nearly every wall. There, in a window of one of them, sits Sue, reading the paper, unaware she was being painted by a neighbor who would go on to fill her life with art.

Carl Little contributed an essay to the catalogue for the exhibition “Impulse and Discipline: Sixty Years of Painting by Robert S. Neuman 1950-2010” at the Thorne-Sagendorph Art Gallery at Keene State University.

Paul Rickert is represented by the Gallery at Somes Sound in Somesville, gWatson in Stonington, Fischbach Gallery in New York City, and the Chestnut Hill Gallery in Philadelphia.