Sune and Patricia Noreen bought the old Frost’s Shipyard Co. in 1985, renamed it the Jonesport Shipyard, and have been a mainstay of the downeast commercial and recreational boating community ever since.

Known for their friendly, all-in-one service, the Noreens have transformed what was at one time a long-neglected boatyard by revamping infrastructure and adding services through the years to cater to the local fishing fleet and a growing number of pleasure craft.

One of their earliest moves was to buy the region’s first hydraulic trailer—at the time, it was a new-fangled piece of equipment, and it attracted attention from the local boatbuilding community.

“The pickup trucks would line up and they’d all be watching the trailer,” said Sune. “The consensus was, ‘Yes, sir, that’s some trailer.’”

“It wasn’t like any hauling-out they’d done before,” said Patricia. “Before, you’d have to float into a cradle and your tractor would haul the boat up the shore. And they had to ground out to do any work. So, suddenly, they could get hauled out in a snap and go back in as soon as they were ready.”

The trailer allowed the Noreens to start what has become a thriving storage and service business. Today, the yard offers wood and fiberglass repair, restoration, haul and launch service, storage, showers and laundry, moorings, supplies, fuel polishing, and a brokerage. It’s a mainstay for the lobsterboat fleet, and is a popular stop for cruisers enjoying the quiet of the downeast coast. Noreen also builds 15 ½-foot fiberglass peapods modeled after a graceful 90-year-old Jonesport skiff.

The yard is located on the narrow shore road that winds through the tiny village of Jonesport. On a beautiful day in mid-July, when the breeze was sighing upon the sun-dappled harbor, carpenter Jake Rowley was inside the main shop, hammering a plug under the torpedo stern of a 1986 Willis Beal-built lobsterboat. The boat, which belongs to a Port Clyde lobsterman, was in for extensive repairs, long-deferred. They included replacing the deteriorated cabintop and fixing the split keel.

Earlier this year, the yard launched another refurbished Willis Beal boat, named O.M.P., for the same owner: It was one of Beal’s early-style, open-cockpit, tiller-steering launches, also with a torpedo stern. That multi-year restoration involved installing a new engine, new woodwork and paint, and replacing some planks.

“I’m glad he brings them here, because this is what I do,” Sune Noreen said of the boats. “Wood is my specialty.” 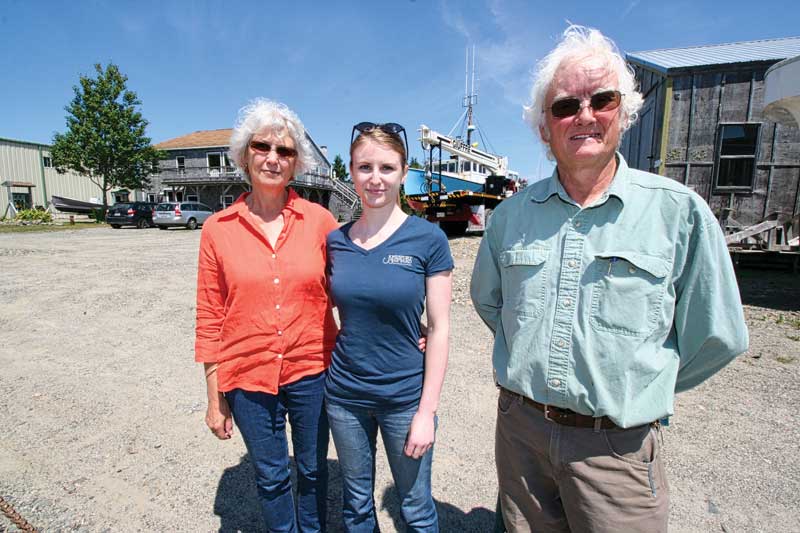 Sune and Patricia Noreen, seen here with their daughter Bragita, bought the old Frost’s Shipyard Co. in 1985, and renamed it the Jonesport Shipyard. Photo by Laurie Schreiber

The Noreens, who met in Alaska, took a circuitous route to Jonesport. Sune was born in Sweden and moved as a child to Alaska, in 1956. His father worked as a carpenter and housebuilder, and eventually took up fishing, too. Patricia was also a child when her family moved to Alaska from Washington State. Her father, a mining engineer and geologist, had been hired by the federal government to explore gold mines there.

Sune fished with his father and brother, before realizing that wasn’t where he wanted to be. “I wanted to be on shore and work on boats,” he said.

The search for somewhere to learn boatbuilding brought him to Maine where a boatbuilding school—the predecessor to the Eastport Boatbuilding School—had started in Lubec. It was the early 1970s. The couple loaded up their car and drove cross-country, arriving in Lubec on a foggy night. 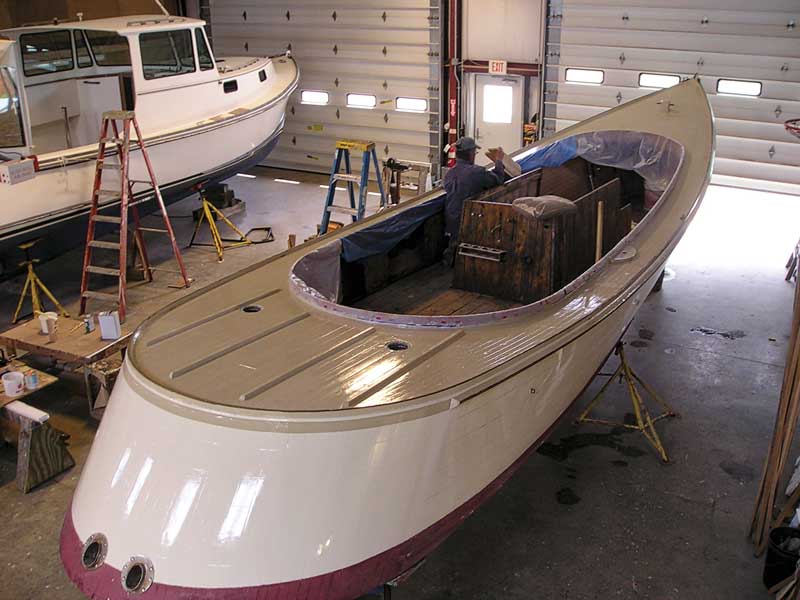 Sune Noreen and his crew completed the multi-year restoration of O.M.P. in June. Built by Willis Beal of Beals Island in the 1980s, it is one of the first torpedo stern boats built in the Moosabec area since 1933. Photo courtesy of Jonesport Shipyard

“We couldn’t see a thing,” recalled Patricia. “We kept following the road and, all of a sudden, we were at customs, on our way into Canada. So we turned around, turned off somewhere, and went to sleep for the night. When we woke up the next morning, we saw lots of seagulls around. It turned out we were right in the middle of the Lubec dump. That was our beginning in Lubec.” 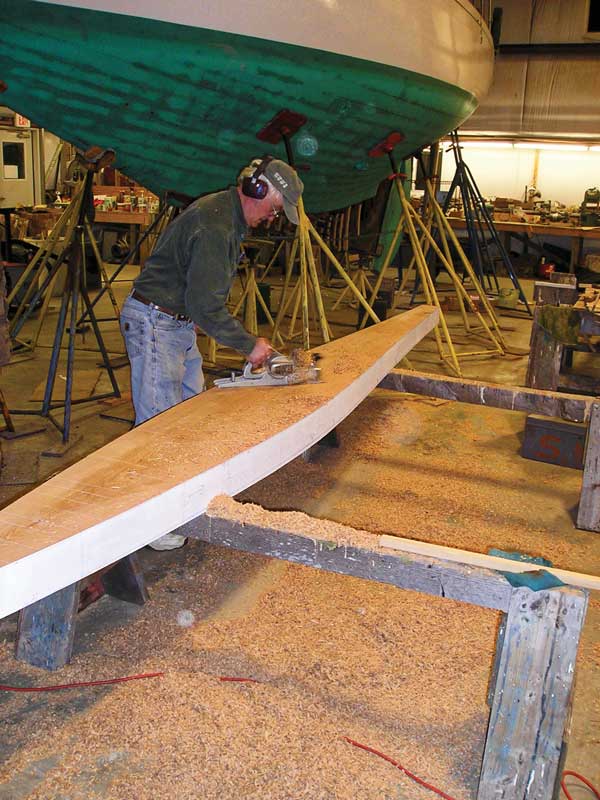 Fabricating a keel for Loosestrife, a Frederick Parker design built by A. Hoody & Son in 1962. Photo courtesy Jonesport Shipyard Sune enrolled in the boatbuilding program, then got a summer job at Southwest Boat, in Southwest Harbor. There he met a fellow worker, Howland Stoddard.

“He kept watching me,” Sune recalled. “Toward mid-August he asked if I would like to work building a schooner. I said, ‘Sure!’ He said, ‘Go talk with Bert Frost. He’s in Jonesport. He’s going to build it for me.’ So I came here.”

Bert Frost was the son of Will Frost, known in the area for the fast rumrunners he built during Prohibition. Bert, who was building a schooner yacht called Dei Gracia, now known as the Rachel B. Jackson, was in his 60s and wanted to pass his skills along to a younger generation. He taught Sune, then 24, planking and sawn-frame construction.

A couple of years later, Frost became too sick to continue work. Eventually, the Noreens returned to Alaska year-round and in Juneau started a boat repair business, the Noreen Shipwright Company.  But they never forgot Maine, and returned 12 years later. Frost’s boatyard was falling into disrepair and was for sale. The owner wanted the property to remain a working waterfront and accepted a low offer from the Noreens. They were soon back in business. 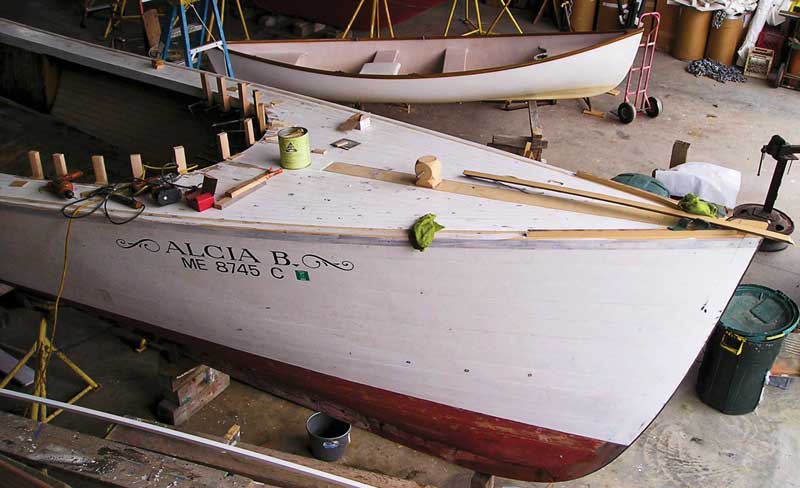 Noreen and his crew are doing a complete rebuild of the 34-foot Alcia B., which was built and launched in the 1980s by Willis Beal of Beals Island. Photo courtesy Jonesport Shipyard

“One of the boat workers came over one day and said, ‘What are you doing?’” Sune recalled. “‘Building a storage area.’ The fellow laughed and said, ‘Do you really think somebody’s going to pay you to store their boat?’ ‘Yeah, I think so.’ And they did.”

The couple built up their workboat clientele and helped establish Jonesport as a yachting destination. Thirty-two years later, they’re the friendly faces everyone knows along this small and lively waterfront. 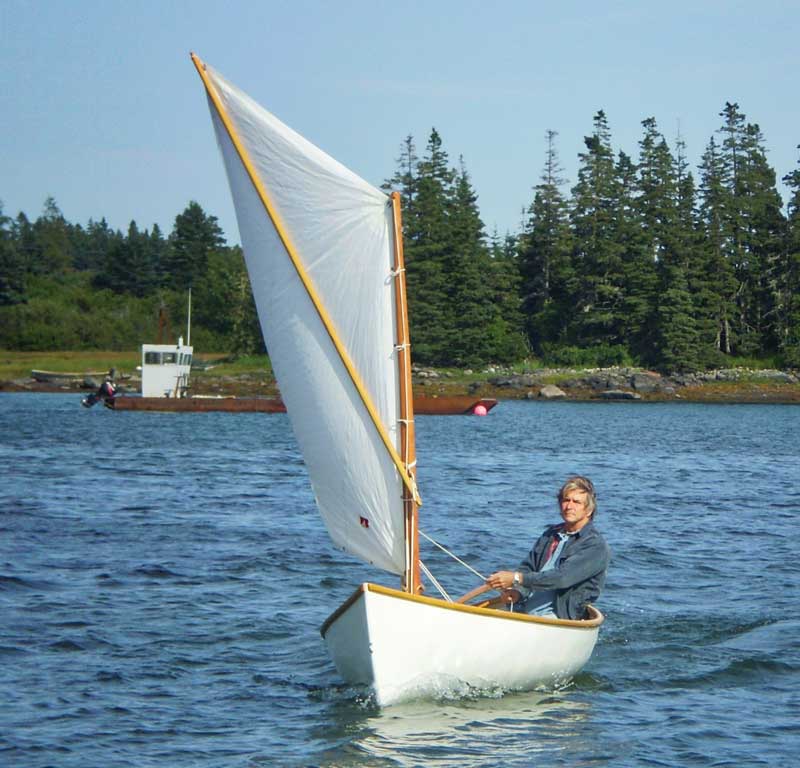 Sune Noreen has built a dozen 15 ½' Jonesport peapods for customers as far away as California and the Bahamas. The lines were taken from a traditional downeast wooden rowing/sailing boat. Photo courtesy Jonesport Shipyard

Now they are looking for their own successor. “We’d like it to go to somebody who will keep doing what we’re doing, or expand on it,” said Sune.

In the meantime, they have plenty of work to do.