“Every leaf speaks bliss to me, fluttering from the autumn tree.”

This is the season of seeds. Not only are the wildflowers all around us going from bud to bloom to seed, but so also are the towering trees. The familiar maple “whirligigs” come twirling down on the breeze in late summer or early fall just before the trees lose their leaves.

By the way, these seeds are edible for anyone who has the patience to shell them out and parboil them. Birch trees are dropping their small seeds, as are evergreens, known as “conifers” or “cone-bearers.” Spruces, firs, and pines bear their cones mostly in their topmost branches. The cones of balsam fir Abies balsamea grow upward from the branches, starting off a deep green decorated with jewels of golden resin then turning brown in early fall when the scales separate. Our spruces—black and red Picea mariana and Picea rubens—bear their cones downward from top branches. These start out green, then turn purple, then brown as the season unfolds. 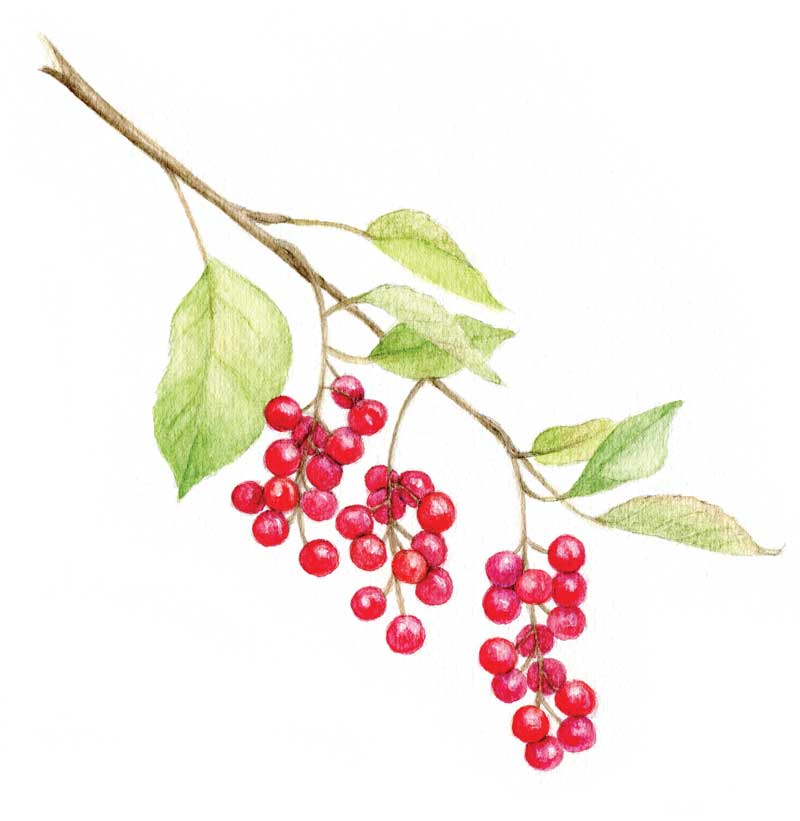 Red squirrels, called “mikhu” by the Passamaquoddy, love the seeds of spruce and fir. If you come across a pile of cone scales on a rock or log, that is where Mikhu has been having a feast. And if you intrude on his territory, he might very well drop a few cones on your head from his treetop just to remind you in whose woods you are wandering. The small pink to brown cones of the Eastern larch Larix laricina or “hackmatack” grow upward from limbs throughout the tree and may hang on for two or three years. As autumn approaches, wild cherries grow red, serviceberries blue, and mountain ash berries a deep orange, all ripe and ready to feed the birds into winter.

In the fields, orange and yellow hawkweed plants reach for the sun, blooming again as they did in the spring. While they look like dandelions they are more closely related to asters, which are also coming into bloom now with fine white or purple petals. Orange hawkweed is sometimes called “Indian paintbrush.”

Filling the bird bath the other day your commentator was quickly greeted by the buzzing of a half-dozen domestic honeybees waiting for a drink. They ringed the bowl at the edge of the water like cattle at a watering hole. Although we have seen them there before, we’ve never seen so many. These are the water-bearers for a nearby hive, coming steadily to carry water back to their kin. With very little rain and little standing fresh water, these bees have found refreshment in our bird bath. They will fill their empty crops with water and return to the hive to pass the water to workers who will drink it and spread it over the brood for cooling on hot days. Bees normally quench their thirst with rainfall or dew, but we have seen very little of either recently. Native bees, of which Maine has over 270 varieties, do not use so much water because they are either solitary or their hives are much smaller. You might try putting out a flat dish of water for the honeybees yourself, and watch them drink.

Atlantic puffins, Fratercula arctica, on Maine islands are dwindling due to warming waters and declining fish stocks in the Gulf of Maine, which is at the southern edge of their range. For several years, there have been reports that Maine puffin populations are under stress. Herring provide the prime food for these iconic birds and herring stocks are low due to overfishing. Puffin populations farther North appear to be safer; Iceland alone has five million breeding pairs.

It was not more than a month ago that sunflowers stood tall and upright in many a garden, waving heart-shaped leaves outstretched like green hands, faces spiraled with ebony seeds and wreathed with yellow, turning to follow the sun through the sky during the day. Now they stand stiffly with heads bowed, their dried leaves rattling in the wind, their seeds pulled out by finches or fallen to the ground. What a rich bounty sunflowers bear each year. From birds to squirrels to mice to deer there are few animals that don’t relish those handsome, oily seeds. Sunflowers (Helianthus spp) are native to North America and are now farmed all over the world, but few of us have ever seen a commercial sunflower farm. Imagine the sight of acres and acres of these giant members of the aster family scanning the sky. Sunflowers are grown both for the oil and for the seeds. Just about every two-legged or four-legged being loves them. The other morning before dawn I saw a pair of skunks browsing on spilled seed under the bird feeders. We get our sunflower seed in 50 pound bags and keep it in a steel trash can with a bungee cord holding the lid to prevent pilfering by raccoons, red squirrels, and bears.

As the sun sinks lower in the sky and the first few frosts occur, living things undergo some big changes. Many creatures simply leave for warmer climes; our migrating birds, our whales and seals, and even our neighbors begin heading South for the coming season. Others fill themselves with food and burrow deep into dirt and duff to stay warm and dream for a time. Most creatures carry these preparations out without thought, without lists, without money, without worry. They simply do what their kind has always done at this season. Theirs is an enviable freedom.

Every now and then your commentator goes alone to our Cobscook Bay field station to do research on young bones, old rocks, older stars, and the underside of clouds, as well as culinary experiments like finding one more way to serve up a can of sardines. With no phone or electricity or human companionship this solitude could well be a sure recipe for loneliness, but it is not. Blue jays and ravens chattered, sea ducks flocked and flapped, chipmunks chirped, asters smiled at the sun, and a huge furry yellow caterpillar with black tufts ambled along the deck happily stopping to taste every fallen leaf its huge black eyes could see.

Believe me, I’ve been far, far lonelier at a high school dance, a ball game, a conference, or a cocktail party. That’s because, as tribal people have known for eons and geneticists are just rediscovering today, all these creatures are my true and real relatives. I was at a family reunion in the woods by the shore. All the crazy cousins were there—not in a hurry, not anxious, not afraid, not lonely—just content to go about their business without ambition or fear, and happy to let me do the same. Did we talk to each other? Of course we did. One dark night long before dawn, I was awakened by the shrill, soaring howls of coyotes very close by and the answering chanting hoots of loons out on the bay in antiphonal response.

Loneliness is one of the great and primal fears of our species because we are likely the most self-conscious of any creature. The song of the human ego is “Me-me-me-me-me-me-me.” When our four-legged and six-legged, finned and feathered and flowered relatives hear our song, they try to get out of the way as we go stomping through the tulips. Our little ego wants to be ruler of the world, and, as the saying goes, it’s awfully lonely at the top. That’s the sad thing about selfishness. The self always wants to stay up on its high horse alone and lonely above the crowd, while the heart, soul and body are always ready to get down, make friends and party with every other cousin creature in the universe, from coyotes to caterpillars. The smallest child knows this and will treat a moth or a mouse as kindly as a man.

If we’re ever feeling lonely, all we need to do is get down off our high horse and go outside where there is a perpetual party going on. If we live, we live surrounded by the family of Creation. If we die, we die with that vast family close by on every side. But whether we live or whether we die, we belong to the family of all life: never forgotten, never friendless, never ignored, never alone, always at home. That’s what the yellow caterpillar told me that day on Cobscook Bay. And I believe it to the bottom of my heart.

From Lao Tzu 6th century BC: “Life is a series of natural and spontaneous changes. Don’t resist them—that only creates sorrow. Let reality be reality. Let things flow naturally forward in whatever way they like.”

And from Yogi Berra: "You can observe a lot by watching."

Rob McCall lives way downeast on Moose Island. This almanack is excerpted from his weekly radio show, which can be heard on WERU FM (89.9 in Blue Hill, 99.9 in Bangor) and streamed live via www.weru.org. Email Rob: awanadjoalmanack@gmail.com.