Just a few from the past three decades

It’s hard to believe that I’ve had the privilege of writing for this magazine for 30 years. Accuse me of prejudice, but I believe that while parts of the boating world muddled along during those decades, the New England area and particularly Maine became a focal point of excellence in terms of yacht design. With the possible exclusion of ultra-high-tech, in the form of carbon foils and flying hulls, Maine’s boatbuilders and boat designers can confidently lay claim to having disrupted the yachting world with groundbreaking work. There are so many examples that it’s difficult to pick just a few; please forgive me if your personal dreamboat didn’t make this list. 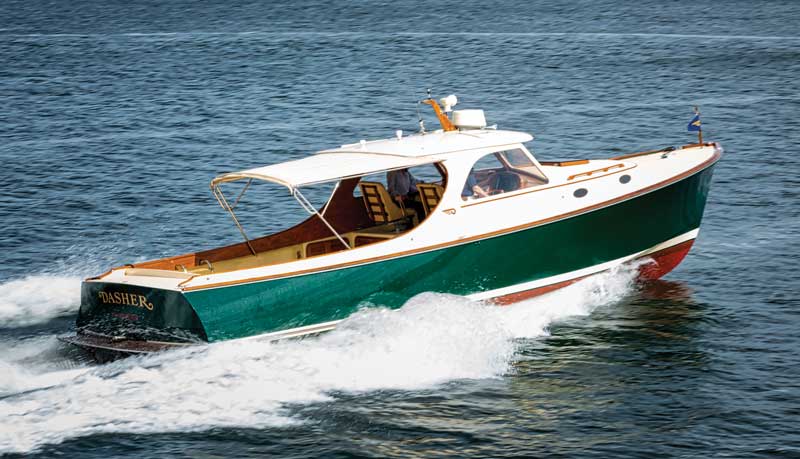 When the 36-foot Hinckley Picnic Boat first emerged in 1994, it was revolutionary. The design showcased the versatility of naval architect Bruce King, who was already known for stylish, large sailing vessels. The hull was only marginally short of outrageous, with impressive flare forward and “tumble-home” aft. King convinced Hinckley to break from tradition with only two facets in the windshield, as opposed to the conventional three to five. He also insisted, at indubitably increased production expense, that the shelter “cap” overhang all-round. Then there was the “jet” drive, which didn’t necessarily make the hull much faster. But it did allow owners to be entirely cavalier about skimming above lobster traps and shallow water. Add the eventual “joy stick,” the brainchild of Shep McKenney, in order to render unprecedented maneuverability, and the world of powerboating was forever changed. In 1991, Hinckley also was the first American boatbuilder to switch from fiberglass to lighter and stronger Kevlar composite for hulls and decks. 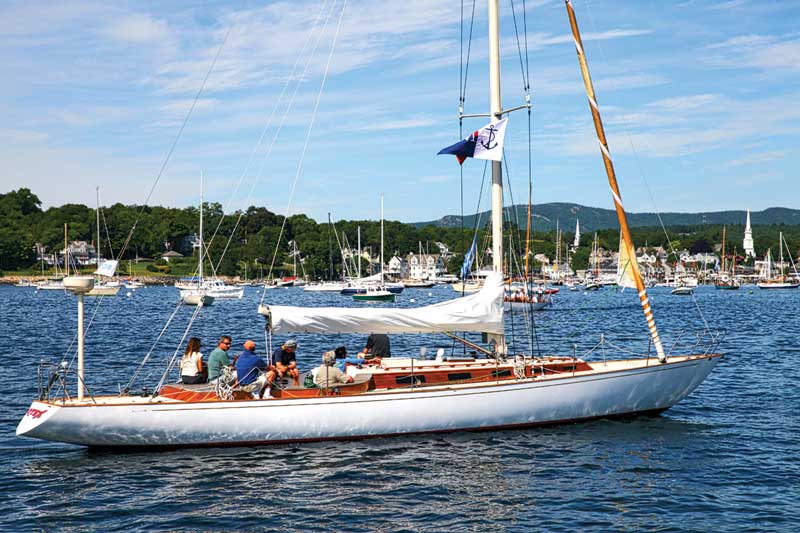 Maine’s Eggemoggin Reach Regatta for classic wooden boats was a hit from its beginning in 1985. Early on, upward of 100 classic wooden sailboats arrived in Penobscot Bay on the first weekend of August to strut their stuff. The need for speed, and desire to win, led many a classic yacht owner to pursue upgrades. It became evident early on that low-freeboard models with separate fin keels and rudders were faster, to the point that a whole new class was established, called “spirit of tradition.”

Steve White, captain of Brooklin Boat Yard, selected an existing Swede 55 design and supercharged her, with svelte rigging, good sails, a foil keel and rudder, and a crackerjack crew. Launched in 1990, Vortex won races right from the start, enticing customers toward Brooklin Boat Yard in search of similar glory. Nowadays Spirit of Tradition wooden sloops race all over the world, and have proven capable of beating even the grand prix racers of fiberglass and carbon-foam. I can’t cite any better example than Vortex.

Doug Zurn and the MJMs

Yacht designer Doug Zurn isn’t commonly thought of as having much of a connection with Maine, but it was here that his career began. Doug worked briefly (as did I) at my twin brother Chuck Paine’s Camden design office. Two chance meetings changed Zurn’s life. Soon after he left us and went out on his own he met singer Billy Joel, who commissioned him to design a powerboat for the waters near his home on Shelter Island, New York. Several of those Shelter Island Runabouts were built under Zurn’s watchful eye, along with molds for production, by Chris White at North End Composites in the Rockland Industrial Park. These boats displayed fanatical sailboat-racer thinking, in that every effort was made to render them as light as possible, the result being that they planed early, level, and fast.

Chance meeting number two had Zurn speeding along Somes Sound in a torpedo-sterned Shelter Island Runabout, when he crossed wakes with Bob Johnstone, of J/Boats fame. Soon afterward Zurn was sweeping the dust off his drawing board one Friday evening when Johnstone phoned to suggest collaborating on fast powerboats. So Johnstone, Mark Lindsay (known for building world champion 505 and Fireball planing dinghies), and Zurn set out to do for powerboating what the Johnstones had done for sail. The result was the MJM line of powerboats. Zurn has designed all the models, and nearly 300 boats have been sold thus far. Early Zurns took a page from downeast-styled powerboats, but they quickly evolved into state-of-the-art examples of disciplined design, known for fuel-efficiency, stability, and comfort. 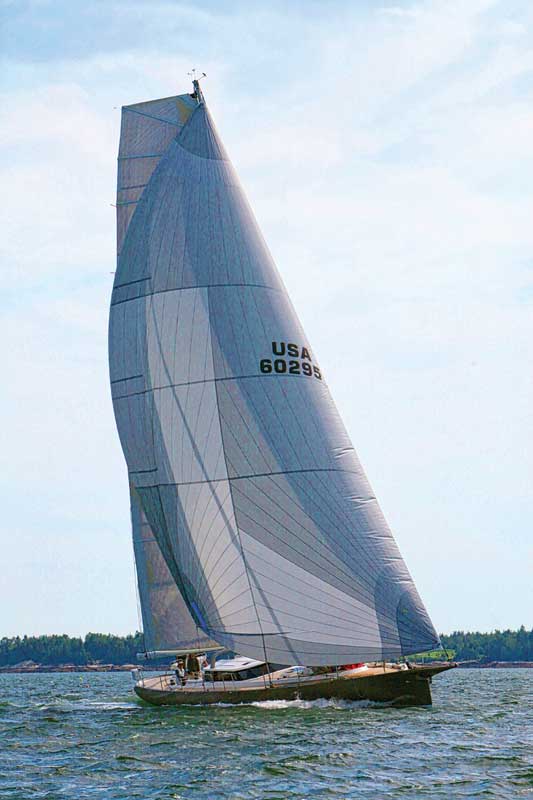 Isobel, a 68' sloop designed by Stephens and Waring and built at Brooklin Boat Yard, was launched in 2011. Photo by Art Paine Stephens-Waring and Isobel

I’ve already mentioned that Steve White’s Brooklin Boat Yard had thrived on Spirit of Tradition upgrades. Steve’s dad Joel White recognized that he could benefit from an in-house yacht design office, and that need was filled by Bob Stephens, with the eventual addition of sidekick Paul Waring. Stephens had a good eye for the elements of sailing tradition and the essences of sailing boat speed. He understudied with Joel, laboring alongside him on details of the first W-Class sloop, the 46. Once on their own, Stephens and Waring handled all the in-house work that arrived from clients seeking new winners for the Eggemoggin Reach Regatta races and other Classic Yacht contests. Their designs are often long and low, keels with bulbs at the bottom, and low-drag rigs.

At some point a customer came along who wanted something radically different, which in anybody’s career can represent the opportunity to either fail or succeed spectacularly. Isobel allowed Stephens and Waring to pull out all the stops. She had a square-topped mainsail, plumb stem, rakish cabin, mostly flush decks, and a silver paint job with metal flake—all the antithesis of everything Maine. Had she lost it would’ve been a fate reminiscent of Icarus. But Isobel blasted around the Eggemoggin racecourse at upward of 10 knots on her first outing.

Sparkman & Stephens designed a gorgeous little sloop in the postwar years, named Stormy. Many years later Tom Morris of Morris Yachts asked S&S to design a modern version. The result, launched in 2004, was the Morris 36, which was marketed specifically as a daysailer, rather than a cruiser. The boat exhibited legendary Morris-level workmanship, and Tom’s son and partner in the business, Cuyler, combined his salesmanship with his sailor-manship to demonstrate how easy she was to maneuver and to sail fast. Not only did the boat sell like hotcakes, but it also helped inspire a new archetype. Other Maine companies produced daysailers and Morris offered a few much larger ones. None of them, in my view, surpasses the lovable looks of the original Morris 36. 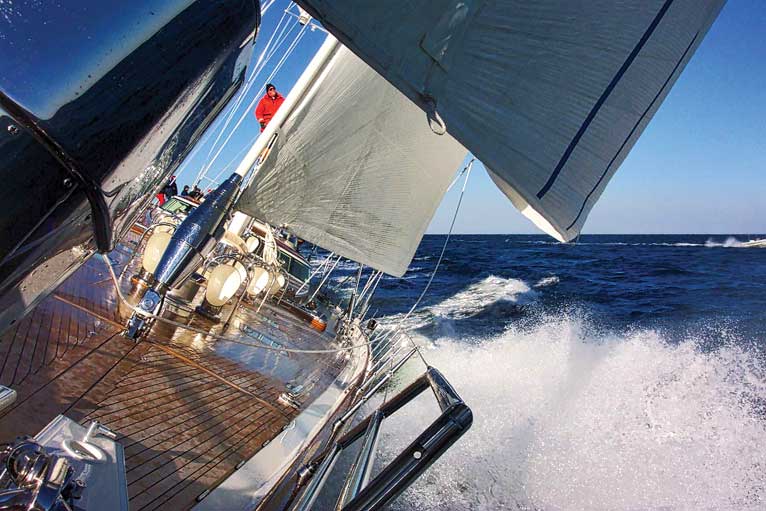 The 154' ketch Scheherazade was the second largest cold-molded vessel ever built when she was launched in 2000. Photo by Art Paine

When Bruce King moved to Maine he had been designing production boats. Once on the East Coast he was inspired by a long tradition of beautiful superyachts. An early effort in Maine was Whitehawk. A larger version of L. Francis Herreshoff’s famous Ticonderoga, the boat was built on a tennis court in Camden and trucked to Rockport for launching.

One great boat led to another, and King stayed busy designing a succession of huge new classics. One of the largest was Scheherazade, a 154' LOA ketch, now sailing under the name Asolare. She was built by Hodgdon Yachts at East Boothbay out of cold-molded wood—the second largest vessel in the world ever built that way. The interior of the boat was paneled in fiddle-grained European sycamore, with metal fixtures in 24-karat rose gold below decks. Scheherazade’s owner wanted to employ a lot of Mainers in order to showcase their workmanship and work ethic, while at the same time providing a permanent boost to Hodgdon’s reputation and infrastructure. I’ve sailed this boat from Maine to Savannah and from there to Bermuda, and I can personally attest that if a gentleman or lady wants to voyage in style and at high speed, it would be silly not to solicit bids from the best boatyards of the Maine coast. 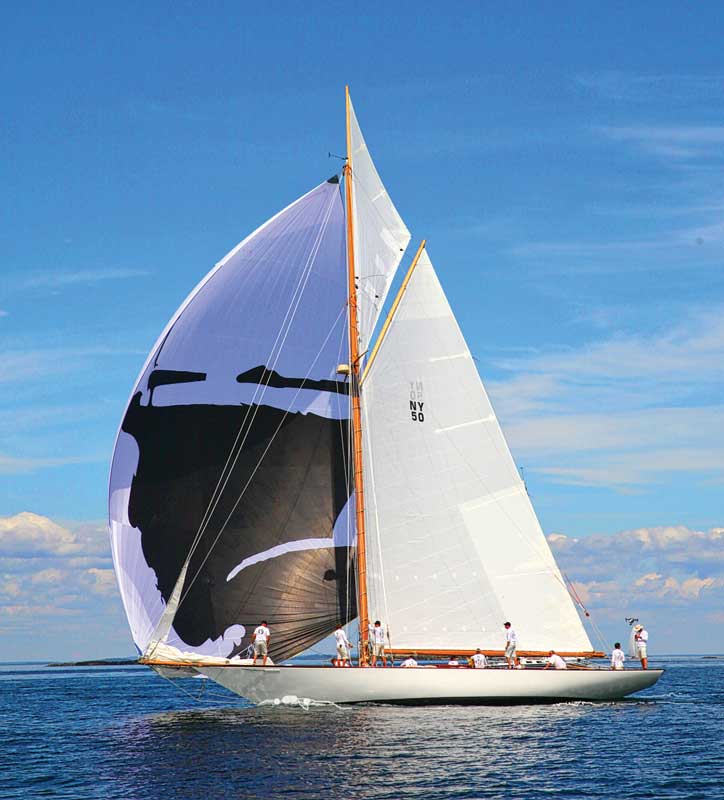 Marilee, a sleek Herreshoff-designed NY40 first launched in 1926, was restored by French and Webb in 2016. Photo by Art Paine Nat Herreshoff, his designs, and re-interpretations

My last inclusion in this short list is not one boat, but the complete oeuvre of the designer Nathanael Herreshoff. This man’s eye and mechanical savvy were so far ahead of their time that his designs have been copied—and sometimes improved by materials and methods he could’ve only dreamed about. The Herreshoff 12½ is so pretty, wholesome, and lovable that 100-year-old boats can still command thousands of dollars.

Builders and designers from Cape Cod to Cranberry Island have “interpreted” Herreshoff’s best boats. Joel White re-designed the 12½ as a centerboarder and called it the Haven, and he similarly reworked the Herreshoff Fish, naming it the Flatfish. Chuck Paine reworked the Fish into the Pisces, a best-selling daysailer, and has created more designs in recent years inspired by Herreshoff.

Herreshoff sailboats get restored at Maine boatyards at considerable expense but it’s always worth it. One good example is Marilee, made re-perfect in 2016 by French and Webb in Belfast, Maine.

Anything drawn by the magic hand of Herreshoff is a lily well worthy of re-gilding. A typical antiquated gaffer out of the mind of the Wizard of Bristol, restored by the likes say of Artisan Boatworks, would best be avoided on a windy beat by any boat lacking hydrofoils. Don’t chance it. Even now a hundred years after its launching, you might well emerge humiliated!

For the past 30 years we’ve been calling my column, “Off the Drawing Board.” That deserves some consideration or perhaps better said, reconsideration. Soon before our first issue hit the presses, a brilliant mathematician and sailor named John Letcher bought a big house in the woods near Southwest Harbor and started a company that revolutionized boat design. Partly because he wanted to design his own boat and found pencils and wooden splines tedious, he figured out how to bend lines quickly and accurately by using computer displays and math. Once he succeeded in producing a good lines plan, he integrated the hydrostatic computations for saltwater immersion of computerized volume, and soon added algorithms that predicted flotation, stability, and even performance.

Letcher marketed all this useful software under the moniker “fairline system” and in so doing threw the whole yacht design world slightly off kilter.

We consider computers essential nowadays in design. It’s likely that no particular boat design, no matter how it was drawn, has been as influential as the product of a man who lived as off the grid as possible while still using an electrical computer.

The eccentricity and the genius of this last example illuminates my belief that there is something special in the air—or in the water—of Maine that inspires beauty, invention, and excellence. How fortunate that this magazine has been extant for 30 years to share in, display, and celebrate every aspect of our specialness.