How much do you really know about these Maine icons? 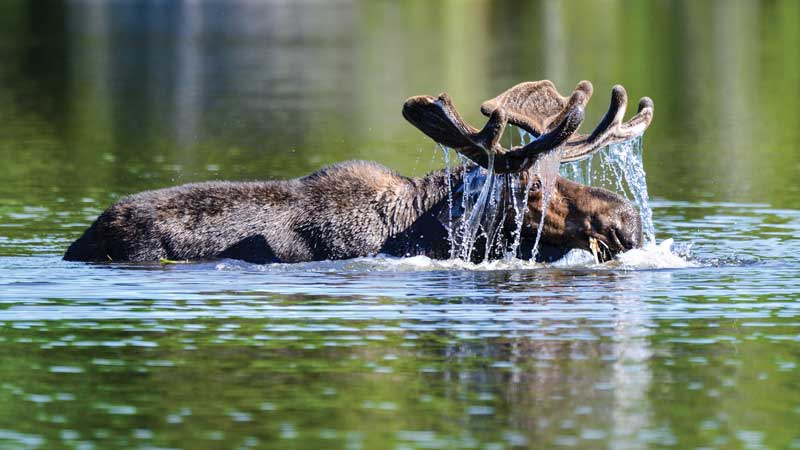 Aided by nasal valves that close underwater, moose can dive to depths of 20 feet. A large bull moose consumes 50 pounds of aquatic plants each day.

Nearly every northern Maine resident has a favorite moose story: a cow moose and her calf licking road salt from an idle snowplow’s headlights, mirrors, and door panels; a lovesick bull moose attempting to mount a Holstein; my neighbor’s dog chasing a young moose beneath a loaded clothesline and then rumbling across a field with a bra dangling from each antler. Tragic stories include Moosehead Lake fishermen watching a moose fall 300 feet from a Mount Kineo cliff and honeymooners seeing a moose killed by a bolt of lightning on a cranberry bog.

My favorite sighting took place in West Shirley Bog, a large wetland several miles south of Moosehead Lake. When I counted ducklings there as a state biologist in the late 1980s, moose sightings outnumbered duck tallies on my data sheets. Two years ago in August, I launched my Old Town canoe at dawn to see if the bog was still “moosey.”

Fifteen minutes later, within a mile of my campsite, a pair of handsome bulls appeared midstream in the glorious morning light. Each time their heads disappeared beneath the water’s surface, I raced ahead. When antlers reappeared, I coasted like a cyclist taking a breather. It’s a successful strategy applied by experienced outdoor guides. Moose do not have great eyesight. They are near-sighted and have a glaring blind spot between their wide-apart eyes. Excellent hearing and acute olfactory glands compensate for visual deficiencies. That morning luck was on my side: a slight headwind carried my odor and sound behind the stern. 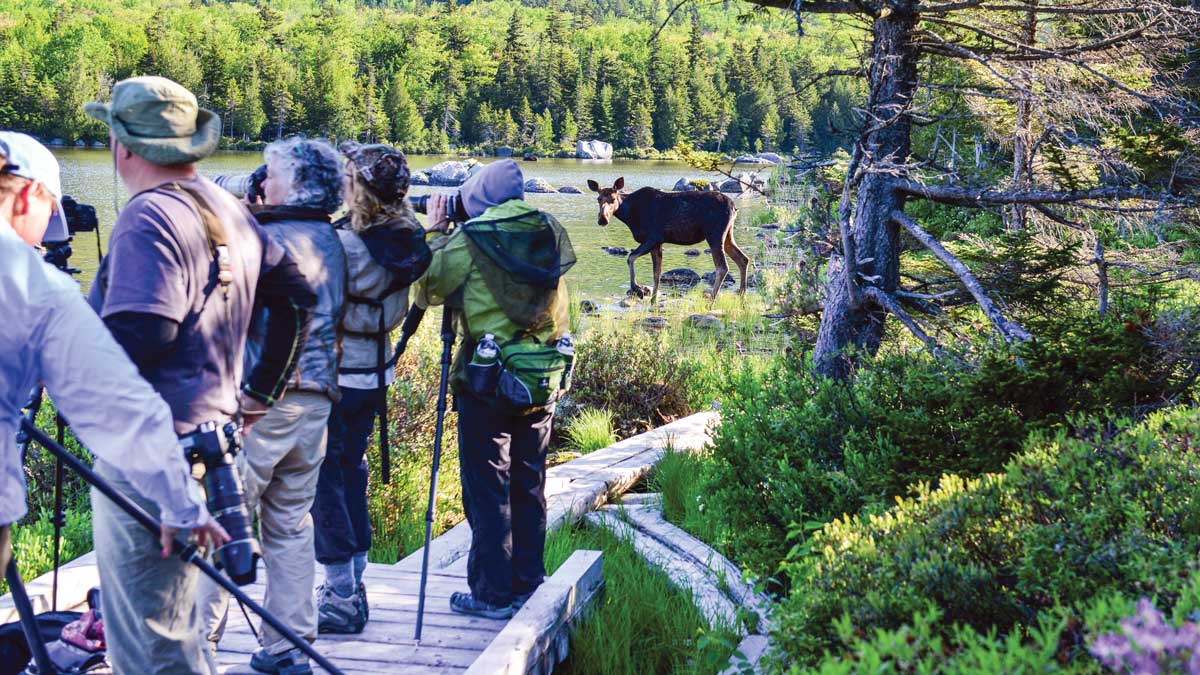 The 800-pound animals, unaware that I was within 20 feet, munched loudly on pondweed, swallowed, and then slipped beneath the surface like a pair of hippopotamuses. I watched them walk on the stream bottom, heads down, slowly picking leafy greens like leisurely diners at a salad bar. And then I erred by not considering the angle of the sun. Spooked by my canoe shadow, the moose surfaced in a mad thrash. Water poured from four-foot-wide palmate antlers as they snorted and clambered up a bank and vanished in the tall marsh grass, leaving me exhilarated and a bit angry with myself for disrupting their breakfast.

Although I’ve seen hundreds of moose during my 40-year career, I’m still mesmerized by these ungainly yet charismatic icons of the Maine woods. With long spindly legs supporting an oversized torso that is connected to a horse-like head, the animals don’t seem well suited for forests or water, yet they thrive in both environments. They can run 35 mph—a respectable speed for Kentucky Derby horses—and can swim 6 mph. My late friend Mark Libby, a Pemaquid Point fisherman and naturalist, told me that while ground fishing near Monhegan, he once watched a young bull moose swim past his boat. The island is 12 miles from Port Clyde, and roughly six miles from Allen Island, where it might have stopped and rested, Mark speculated, during its marathon swim.

“The last I saw of the moose,” he said, “it looked like he was headed to Europe.” Young moose, especially bulls, are often stricken with wanderlust. Like recent college graduates, moose often travel great distances from their birthplace. Independence is a tough love lesson learned at an early age. Yearling calves are rejected by pregnant mothers just prior to birthing in late May. On several occasions I’ve watched pregnant cows chase yearlings—a threat to newborn calves—across forest openings and into bogs.

Moose are well adapted to aquatic life. Nostril valves, which tighten as water pressure increases, allow the animals to remain underwater for up to a minute at depths of 20 feet. Easily digestible pondweed, yellow water lilies, and water shield are high in sodium and other nutrients essential to proper cell functioning. An aquatic diet rich in protein is critically important in summer when moose undergo rapid physical change, including replacement of a winter pelage with a summer one. For a 1,200-pound bull, the micronutrients in the daily consumption of 50 pounds of aquatic plants powers the two-month growth of five-foot-wide bony antlers that can weigh 25 pounds apiece. (At a hunter check station in Greenville in 1989, I placed a tag on a prize bull in the back of a pickup. The moose head and impressive antlers were immediately sold for $15,000 to a buyer representing a Boston law firm.) Unlike humans, moose have a third, translucent eyelid, called a nictitating membrane. These act like goggles underwater and as an eye cleanser in the forest.

Deep snow limits moose mobility but most survive winter’s hardships. Once while snowshoeing atop three feet of powdery snow, I watched a cow moose and her calf walk past. The mother took short steps so her youngster could follow in her tracks. The previous May, the cow and this calf, which weighed 30 lbs. at birth, frequently waded in front of my Shirley Pond home. That winter day the seven-month-old calf weighed 300 lbs.

In the absence of wolves, which were extirpated in Maine by the early 1900s, today’s largest threat to moose comes from two small parasites: brain worms and winter ticks. Brain worms normally reside in a deer’s outer brain tissue, where they rarely cause health issues. But in moose, the noodle-like worms are lethal.  Winter ticks can also be deadly, especially when moose are burdened with 50,000 blood-sucking parasites. Moose with heavy tick loads often die of anemia, hypothermia from hair loss, and weakened immune systems.

As Maine winters become shorter and less severe, deer (and brain worms) and tick populations will grow and expand, placing the state’s estimated moose population of 60,000—the largest in the contiguous United States— at serious risk. In 2013, Maine’s top scientists concluded that moose might not be part of the state’s future fauna. The scientists’ report, Climate Change and Biodiversity in Maine, which ranked climate change’s impact on 442 species, listed moose as highly vulnerable with a potential of extirpation within 50 to 100 years.

There’s no better time than now to venture into northern Maine to see moose while you still can. A few words of wisdom about cell phones, viewing moose, and driving on logging roads in the Maine woods:

Do NOT rely on smartphones for navigation or contact; coverage is spotty at best or nonexistent.

During October’s moose breeding season (called the rut), bulls can be aggressive. For your safety, observe and photograph moose from a safe distance of at least 100 feet.

In all seasons, never get between a cow moose and her calf. A mother moose is the most dangerous animal in the Maine woods. They kill and maim predators by rearing up on their hind legs like a horse and thrusting forward with their sharp, powerful front hooves. If the hair on her upper neck is raised or her ears are laid flat, you’re too close, and she’s primed to attack.

Reaching most Maine moose-watching sites requires driving on privately owned logging roads. Should you meet a log-hauling truck, pull over to the right and allow the truck to pass. Never leave a vehicle unattended in the middle of the road to view a moose. Log trucks often travel at high speeds and assume the right-of-way.

West Shirley Bog (Town of Shirley, ME Atlas and Gazetteer, Map 41 E-1.5). It’s possible to see moose while driving the CCC Road (dirt road) to the bog, but the odds of seeing moose improve by canoeing or kayaking at daybreak, especially July to September. Campsites are available near the boat launch site; hotels and lodges can be found in Shirley and Greenville.

Pine Stream (Township 3 and 4, Range 13 WELS, ME Atlas and Gazetteer, Map 49 C-4.5) is where Henry David Thoreau saw a moose in 1853, which his Penobscot Indian guide shot. Witnessing the killing, Thoreau later wrote, “nature looked sternly upon me on account of the murder of the moose.” You may shoot all the moose you see with a camera. I counted 13 here during one early morning canoe outing. Unimproved campsites can be found near the boat launch site. It’s best to paddle the stream at daybreak in July to September. If you prefer homestyle meals and a bed, book reservations at the nearby Chesuncook Lake House.

Chimney, Elbow, and Kidney Ponds, Baxter State Park (Mt. Katahdin Township, T3 R9 WELS, ME Atlas and Gazetteer, Map 51 D-1) are the most popular moose viewing areas in Maine. Moose hot spots vary daily so check with park rangers when entering the park. And remember, if you arrive late in the morning and moose are hiding in shade, return in early evening. Baxter State Park scenery alone is well worth the visit. If you plan to camp out, you’ll need to make a park reservation months in advance.

Lazy Tom Bog (Township 1 Range 13 WELS, ME Atlas and Gazetteer, Map 41 A-4) is one of the Moosehead Lake region’s premier moose-watching hotspots. This bog is best explored by canoe or kayak. Camping and lodging are available in nearby Kokadjo.

Ciss Stream and Little Ciss Stream between Daggett and Round Ponds (Township 7 Range 14 WELS, ME Atlas and Gazetteer, Map 55 E-2.5) produce some of the largest moose in Maine. This area is a personal favorite because it’s remote and offers ample paddling solitude. Camping is available but I recommend staying at nearby Loon Lodge on Round Pond. The owners are friendly and can offer suggestions on the most current moose-viewing hotspots.

For guided evening moose safaris, call the Moosehead Lake Visitor Center in Greenville. The staff can provide you with names of guides who specialize in family and group tours.

For a unique experience, bush pilot Rodger Currier (Currier’s Flying Service) of Greenville Junction has catered to moose watchers since the early 1980s. It’s a thrill seeing Moosehead Lake and moose from the seat of a Cessna 180 floatplane.

Claybrook Mountain Lodge (Highland Plantation, ME Atlas and Gazetteer, Map 30 D-1.5) has a well-earned reputation of connecting photographers with moose, especially during the moose breeding season in October. The owners are friendly and knowledgeable, and the meals are superb. The lodge is twelve miles from the spectacular Bigelow Preserve and Flagstaff Lake.

Bradford Camps on Munsungan Lake (Township 8 Range 10 WELS, ME Atlas and Gazetteer, Map 56 C-4.5) is one of the oldest sporting lodges in Maine. It’s located in the heart of the north Maine woods on a remote, stunningly beautiful lake. Like Claybrook Mountain Lodge, the owners are friendly and knowledgeable, and the meals are excellent. The owner operates a floatplane if you’re interested in a hawk’s-eye view of the region’s forests and lakes.