Nine years ago, while driving home from a trip to Presque Isle, Belfast artist Linden Frederick commented to his wife, Heather, that he’d noticed that many writers bought his oil paintings because they could look at the rather mysterious and ambiguous dusk or nighttime scenes and be immediately bewitched by the strong story or narrative they felt was hidden in them.

That was the beginning of the concept for Frederick’s latest project, “Night Stories,” a bravura collection of 15 of his newest paintings, paired with 15 gripping short stories by some of the country’s greatest writers. The authors chose their favorite from the 15 paintings, and each wrote a 1,000- to 5,000-word story inspired by it. This is the reverse of the usual process wherein illustrations are made for an existing manuscript.

“Night Stories” is also unique because it is both a book and two art exhibitions. As an exhibition, it had its official opening at the Forum Gallery in New York City, on May 11, with the show running there through June 30. The fifteen 36” x 36” paintings and their accompanying stories will be transferred to Rockland for the next show, to open at the Center for Maine Contemporary Art on August 18. It will be on display there until November 6. An artist’s reception is planned at CMCA for August 25, 5:30 – 8 p.m.

The book, Night Stories: Fifteen Paintings and the Stories They Inspired, published by Glitterati Arts, is available by contacting Forum Gallery or the CMCA show.

Lushly realistic, painted with technical mastery, Frederick’s paintings often show plain, sometimes shabby homes and commercial buildings, often in Maine, either at dusk or night, with a luminous point of light emanating from a single source – perhaps an open window or a street light. There are no people in the scenes. The home or store’s occupants are hinted at but unseen, which starts the imagination churning. Some writers have told Frederick that his works are like stage sets for a play that is taking place in their mind.

The 15 writers were recruited by Frederick’s friend, the Pulitzer-prize winning author, Richard Russo (Empire Falls) of Portland, Maine. All agreed immediately to be involved. For their efforts, each will receive a 5” X 5” study of the work they chose to write about. The assignment was to write a story of between 1,000 and 5,000 words, to go with the painting they’d chosen. The first to turn in her short story was Ann Patchett, author of, among many other works, Bel Canto, and most recently, Commonwealth.

When Patchett was told by Heather Frederick that she was the first to turn in her story, Patchett replied that as a result of her Catholic school girl training, she always tried to be first on every assignment. Patchett’s short story, Constellation, was inspired by Frederick’s painting entitled “Vacant.” The story is about a man whose inability to communicate with his family eventually drives him away from them, she said. “There as such a desolate quality in ‘Vacant,’ a real emptiness, and I imagined that empty space being inside this character.” 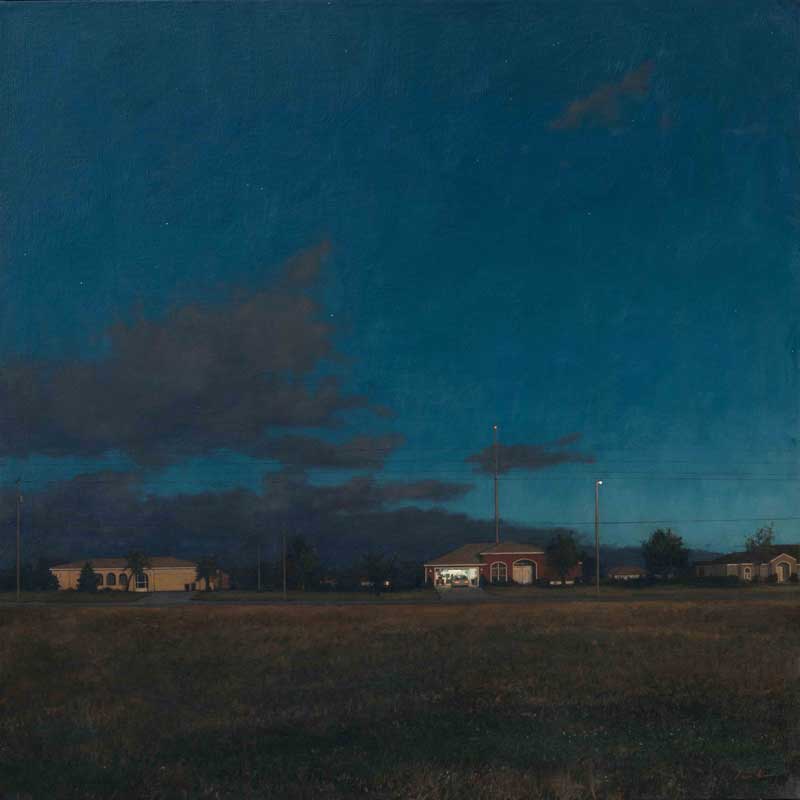 Russo, who has lived in Waterville, Camden, and now Portland, said he and Linden had been friends for several years. “Reason enough to jump on board,” said Russo. “But perhaps more importantly, our work overlaps. He’s a narrative painter (his images always invite stories) and I’m a painterly storyteller. The fact that we grew up a few miles apart doesn’t hurt either. My story, Downstairs is based on a true story in a genre I’ve come to think of as “Gloversville Gothic.” Gloversville, NY, is Russo’s boyhood home and the inspiration for much of his work. “My novels are riddled with them – dark human behaviors that seem to spring naturally from Rust Belt soil,” he said. 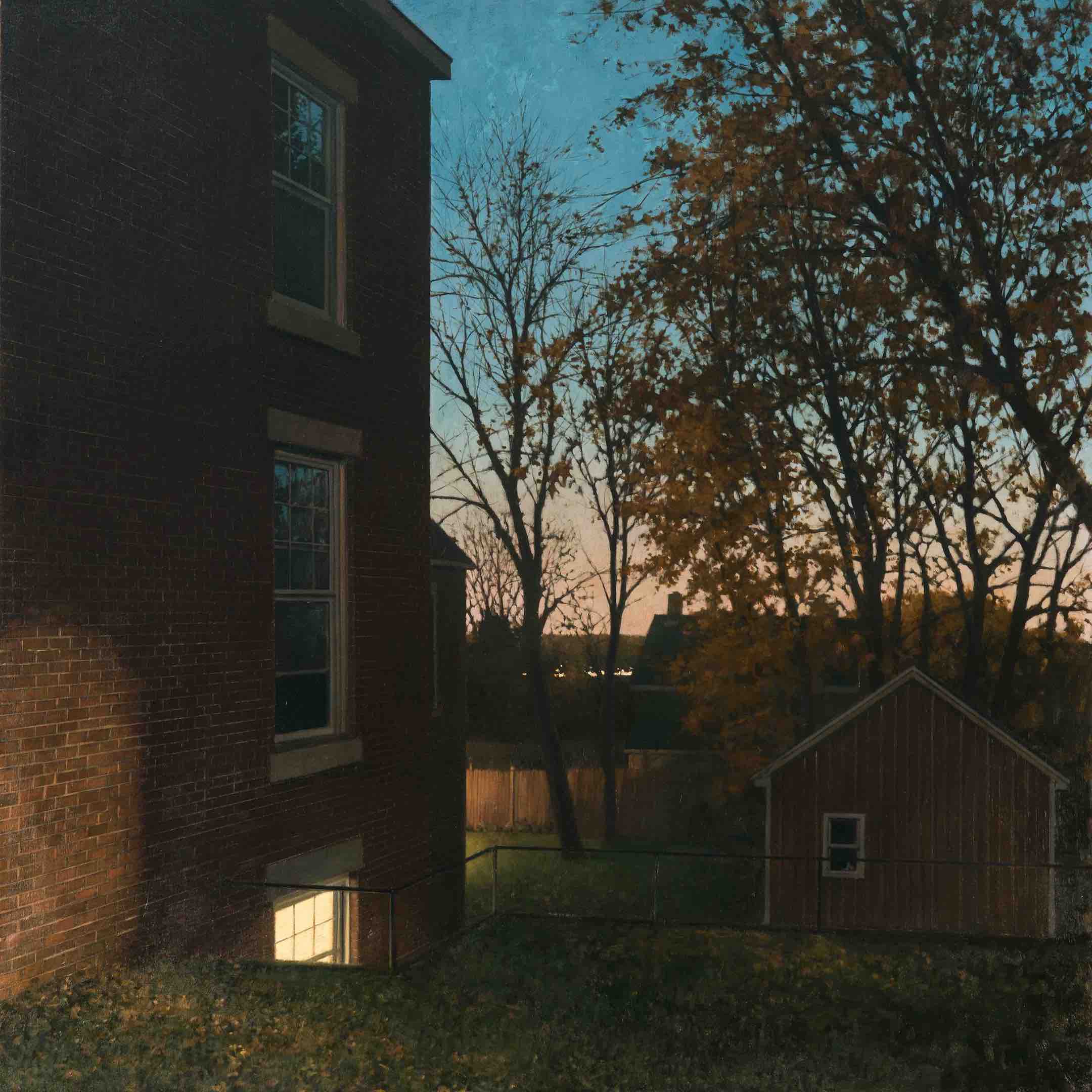 Yarmouth resident and prize-winning author of Euphoria, Lily King based her story, Mansard, on Frederick’s painting of the same name. “Most of the story takes place in a contemporary house in Massachusetts, so you’ll have to wait for that to be explained,” King said. “It’s set in the early sixties. A few housewives have gathered to play bridge, and the host’s estranged and perhaps criminal father has shown up, disrupting the life of one of the other women.” 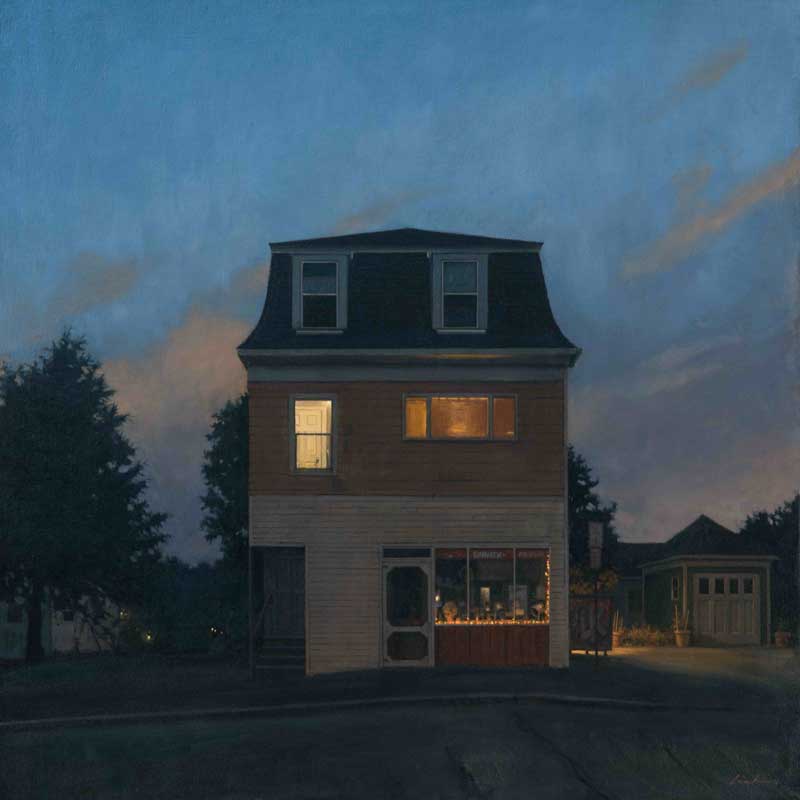 Lilly King’s called her story Mansard after the painting of the same name.

Other top-tier writers with Maine connections, who contributed stories are: Pulitzer Prize-winner Elizabeth Strout (Olive Kitteridge), who was born in Portland and lived in Maine as a child; Anthony Doerr (who graduated from Bowdoin College and is best known for his Pulitzer-prize-winning best-seller, All the Light we Cannot See); Lois Lowry, who lives in Maine and who has twice won the Newberry Award for children’s book-writing  (The Giver, for one), and Tess Gerritsen, a retired medical doctor who lives in Camden and who writes the highly popular Rizzoli and Isles books, upon which the TV series is based.

The list of contributors includes Oscar-winning screenwriters, Ted Talley (Silence of the Lambs) and two-time Oscar nominee, director Lawrence Kasdan (he directed and helped write the screen play for the The Big Chill and directed and adapted the screenplay from Anne Tyler’s novel of the same name for the movie, The Accidental Tourist), Louise Erdrich, Andre Dubus III, Luanne Rice, Dennis Lehane, Joshua Ferris, and Daniel Woodrell.

Frederick, who is now 64, studied art at the Ontario College of Art and in the Academia de Belle Arte, in Florence, Italy. Widely exhibited and collected, he has paintings in the collections of the Portland Museum of Art, and the Farnsworth in Rockland, among others. His gallery representation is Forum Gallery in New York City.

Something of a Renaissance man, he has been playing the cello for 10 years, making cellos for seven years and guitars for 35 years, He is now learning violin-making from famed violin, viola, and cello artisan, Jonathan Cooper, two days a week in Portland, and is finishing up his sixth violin. He has also built two home studios himself, repairs bows for stringed instruments, and he bicycles great distances, when his schedule allows.

He says his greatest joy is the time he spends in “fiddle camp,” time which he calls “sacred.” He has attended camp for seven summers – six in Montville, Maine, and one in Scotland. There, he can play music from dawn to dusk, and talk to, learn from and perform with fellow fiddle enthusiasts.

Asked why he so often paints buildings at dusk or night, Frederick said that he thinks it started when he was a newlywed, over 40 years ago, when he and Heather were remodeling their first home in upstate New York. “Everything was chaotic. The refrigerator was in the living room, and so on. I’d drive home from work at the end of the day, as it got dark, and would pass the peaceful, organized homes belonging to other people, and I’d wonder what was going on inside those homes….how nice it must be to have everything ship-shape and in order.”

What goes on behind the walls of homes and buildings we pass by may be a puzzle to many of us. Linden Frederick and 15 very talented writers have found a rather inspired way to deal with the essential mystery of these everyday scenes.