“I was suddenly sensible of such sweet and beneficent society in nature, in every sight and sound around my house, and infinite and unaccountable friendliness all at once like an atmosphere sustaining me, as made the fancied advantages of human neighborhood insignificant.  Every little pine needle swelled with sympathy and befriended me.” —Henry David Thoreau 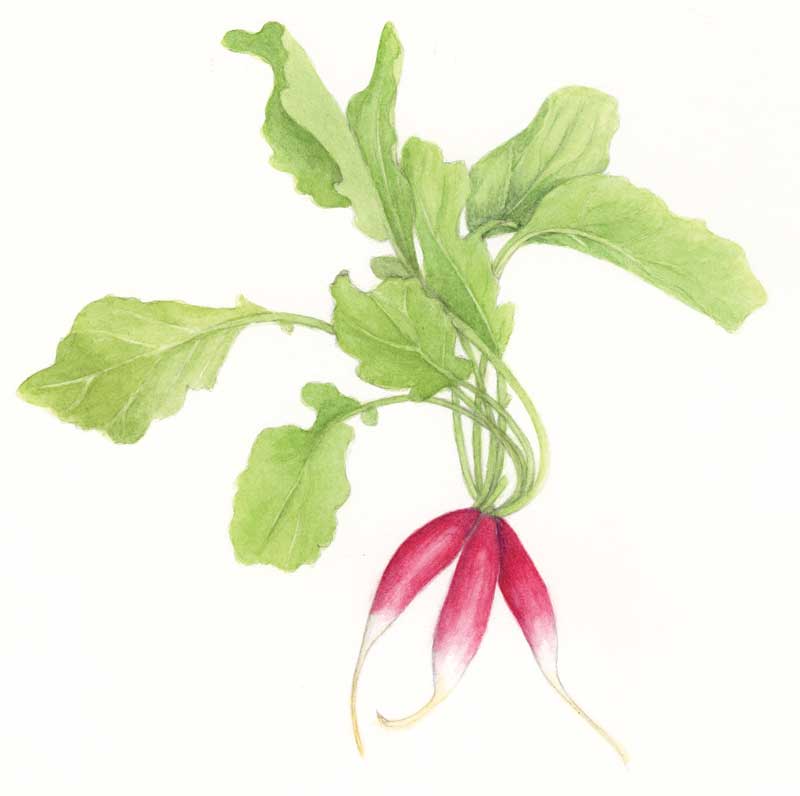 Illustration by Candice Hutchison New growth on spruce and fir is full-sized and hardening off, although it is still a lighter green. A few wild strawberries dot the clearings with red, but they are small and hard due to the dry weather. Bunchberry clusters are small and green. Jack-in-the-pulpit rises shyly along brooks and streams while pale blue flag blossoms curl up and fall away.

Gardens are starting to share their yield now with fresh spinach, lettuce, radishes and other greens. Strawberries are delighting everyone young and old. Maybe you’ll find some fresh peas if you are lucky. The farmer’s market bustles with growers and buyers alike. Support local farmers so they can continue to support you. Meanwhile apples are sizing up in the orchards and blueberries on the barrens; and so many other varieties of berries are plumping up in the fields and forests waiting for the intrepid forager to find them.

Despite the dry weather, mosquitoes and blackflies are still active, joined by deer flies and horse flies that want more than just a tiny drop of blood from you. I am always willing to usher a hornet or a spider or other insect out of the cabin trapped in a jar covered with a postcard from Hawaii, but once they try to take flesh or blood from me or someone I love, I get a little blood-thirsty myself and will swat them good and proper.

The other day at camp we went down to the western shore of Cobscook Bay around high tide—one day after the Fourth of July and there was not a boat of any kind in sight anywhere on the bay. The stunning silence was soon broken by crows mobbing a bald eagle high in a fir tree about a quarter mile up the shore toward the river. The crows hollered and the eagle chattered in its high-pitched voice in comic contrast to its fierce reputation. Soon the calls were answered by another eagle that came sailing over the beach, swirling and looping as though showing off for us. A third eagle joined the first two and it became clear that this was a hunting expedition, the quarry being a flock of eider ducks with their ducklings a couple of hundred yards out in the bay. The eagles have a careful and effective method of hunting ducks. One eagle dives low in front of the watching ducks, which dive at the last moment. A second eagle then swoops in and grabs a duckling the moment it pops back up. This method was successful and one eagle rose with its dripping prey clasped in its fierce talons. All three then disappeared to share their catch in their lofty eyrie.

Watching bald eagles duck hunting under blue skies over the lucid waters of Cobscook Bay is surely a transcendent experience, allowing us to see more clearly our place in the order of things. It is an ecstatic experience, too, allowing us to stand outside of ourselves. These moments provide a powerful vision of the world as it was meant to be, and as it will be again one day, ruled by Nature and Nature’s God, and not by man. 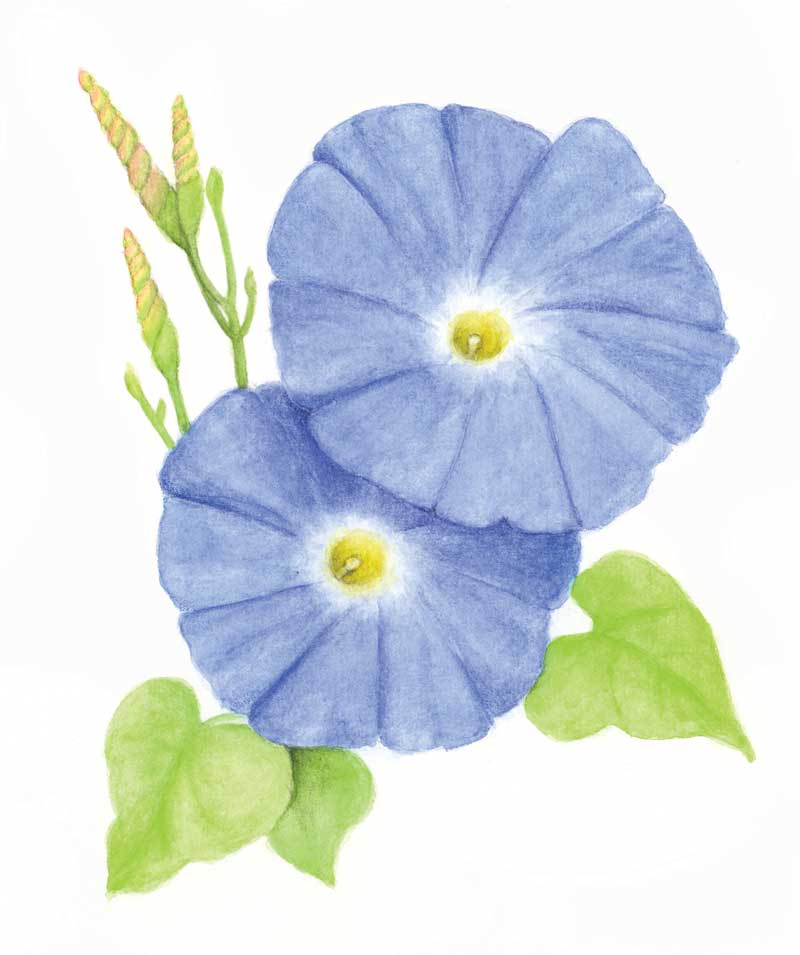 Illustration by Candice Hutchison Summer is at its richest and ripest these days, full of life and pregnant with possibility. While the early summer wildflowers like ox-eye daisy and goat’s beard or meadow salsify go to seed, the late summer flowers like black-eyed Susan, tansy, Queen Anne’s Lace and morning glory are just coming into bloom, turning the wheel of life as they have since time began.

The young of most wild birds and animals are now learning to forage and feed themselves with more or less help from their parents. Some, like skunks and porcupines and most songbirds, will be on their own come Fall. Others, like deer and crows, will stay with the family group another year or more before they strike out on their own.

When I walk down the path through the woods to our camp and drooping fir branches knock off my hat, it’s a sure sign we need rain. The branches of many kinds of trees bend downward when they lack moisture. This is the principle behind the so-called Old Woodsman’s Weather Stick, which is nothing but a peeled twig from a fir tree turned upside down and tacked to the side of the barn. If it points up, the weather is dry. If it points down, it is wet.

Ospreys and terns are diving and feeding in the bays—the ospreys solitary, quiet and stately, the terns numerous and noisy. All seek the herring and mackerel and other small fishes of summer. Mackerel season is also popular with earnest human fishing fans who line the docks and breakwaters to cast a line for the sleek and dazzling fish. Very good for you too—fresh air when you catch them and healthy omega-3 fats when you eat them. What could be better?

Hot weather has also warmed up the waters of the Gulf of Maine to where it’s possible for the hardier among us upright primates to take a dip and even swim a few strokes in the saltwater.  The sensation is cleansing and refreshing as the astringent salt stings in every little cut and scrape and the cold flushes the skin and sets the heart to pounding.

Fruits and seeds are reaching their fullness. Apples are beginning to show some color in their cheeks. Wild cherries are a brilliant red. Blackberries are turning the deepest purple. Mountain ash berries are orange. Service berries are blue. Bunchberries are bright red, and blueberries are… gone, because we ate ’em all up!

By the way, the mountain ash Sorbus Americana is also called Rowan or Rowantree. Its fruit comes in clusters of berries that ripen in October and remain on the tree all winter to provide food for many sorts of birds including grouse, robin, blue jay and cedar waxwing as well as for squirrels and wild mice. In Europe these berries are also used for preserves and distilling. The Rowantree figures in Sami and Norse mythology wherein it was regarded as effective against ill fortune and evil spirits. In Scotland it was often planted by the gate or front door to protect from malevolence. Plenty of reasons to cultivate lovely Rowan in your dooryard.

The twin white-tail fawns that have been walking through our yard for months have gradually lost their white spots and are looking like fine miniatures of their mother now.  The young of many other animals born this season are getting their growth and will soon be moving out to seek territories of their own, just as our young head off to school, out in the world for new adventures away from home.

Back in 1992, your commentator was carrying around a seedpod that sprouted and grew into the Awanadjo Almanack. That seedpod was Thomas Paine’s Age of Reason, the book that got him thrown out of the pantheon of the Founding Fathers. “The Word of God,” wrote Paine, “is the Creation we behold and it is in this word, which no human invention can counterfeit or alter, that God speaks universally to humankind.” There is little record of whether Paine tramped the woods and fields, or sailed or paddled the waters in those stirring times of the birth of our nation; but few have declared this truth more clearly in the two centuries since. Paine had no patience with, and reserved his sharpest attacks for priestly religion, which was—and still is—devoted to the fear of death and the pernicious fiction of individual salvation. Paine’s book is a wild and unforgettable adventure and I highly recommend it to those who love both Nature and Spirit. Since then, many others have followed him by speaking reverently of Nature without invoking the name of any particular deity or savior; though many were deeply spiritual. Think of Emerson, Thoreau, Burroughs, Muir, Aldo Leopold, Rachel Carson, Annie Dillard, Bill McKibben, many of whom, by the way, were not in the least afraid of church.

Since 1992, this Almanack has been engaged in an earnest endeavor to bring science and spirituality, Nature and Nature’s God, together in an amiable, peaceful, and even laughing embrace. For whatever success we have thus far enjoyed in that endeavor, we are indebted to you who have heard or read these words week after week and year after year for the past 25 years.

From Albert Einstein: “Look deep into nature and you will understand everything better.”

From Pope Francis: “We seem to think that we can substitute an irreplaceable and irretrievable beauty with something we have created ourselves.”

Rob McCall lives way downeast on Moose Island. This almanack is excerpted from his weekly radio show, which can be heard on WERU FM (89.9 in Blue Hill, 99.9 in Bangor) and via www.weru.org. Email Rob at awanadjoalmanack@gmail.com.