The mythic trout that always seems to get away

The author fishes a favorite pool for brook trout, in hopes of landing one of a less evasive variety than White Nose Pete. Photo by Trish Romano

Brook trout measured in pounds rather than inches are not uncommon in the Rangeley Lakes Region of western Maine, but there is one fish that stands out above all the rest. He is called White Nose Pete, although some refer to this piscatorial desperado as Pin Cushion Pete, for reasons that will soon become apparent.

My encounter with Pete came one evening in late August. A slight breeze rustled the aspens. The scent of balsam was strong as the sun slipped behind the conifer-studded hills along the western shoreline of Richardson Lake.

Above me, water thundered out of the bottom of Upper Dam, which was built in the 1850s of heavy timber felled from an untamed forest that to this day spreads outward for many miles. The massive structure holds back the waters of Mooselookmeguntic Lake, the largest of the lakes in this region of western Maine, from those of Richardson Lake. This was years before work began to replace the dam with the modern structure that presently meets the requirements of the Federal Energy Regulatory Commission. 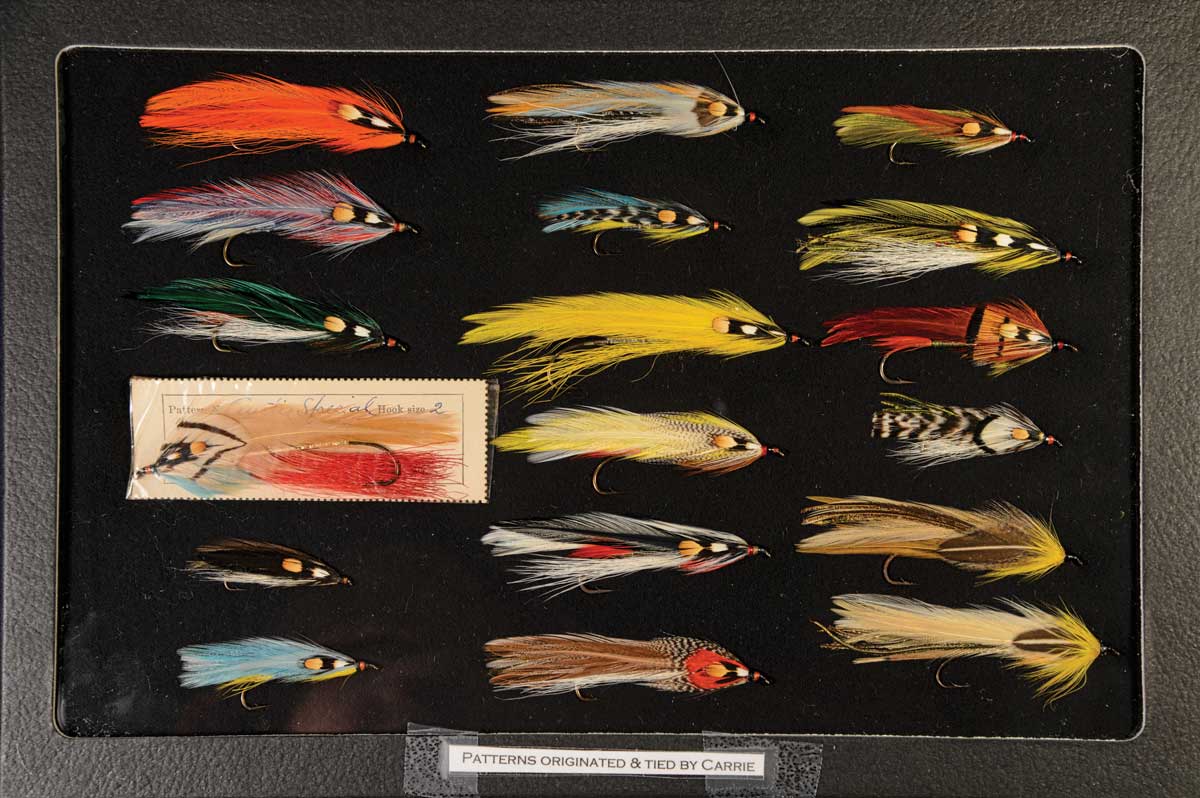 I was casting a streamer called a Gray Ghost with fair success, but my mind had wandered as it often does to the angling legends of this region, which is steeped in sporting tradition. Staring across the water, I followed the neatly trimmed lawn as it sloped upward from the shoreline to the row of cottages, many of which were the original camps built beside Upper Dam. The present owners of these cabins carry on the heritage handed down by regulars of years past. These include the artist, taxidermist, entrepreneur, world-class fly-rod caster, guide, and all-around renaissance man, Herb Welch, as well as Wallace Stevens, who was one of the region’s preeminent guides from the 1920s through the 1940s. (And no, he was not the poet who shared the same name.) 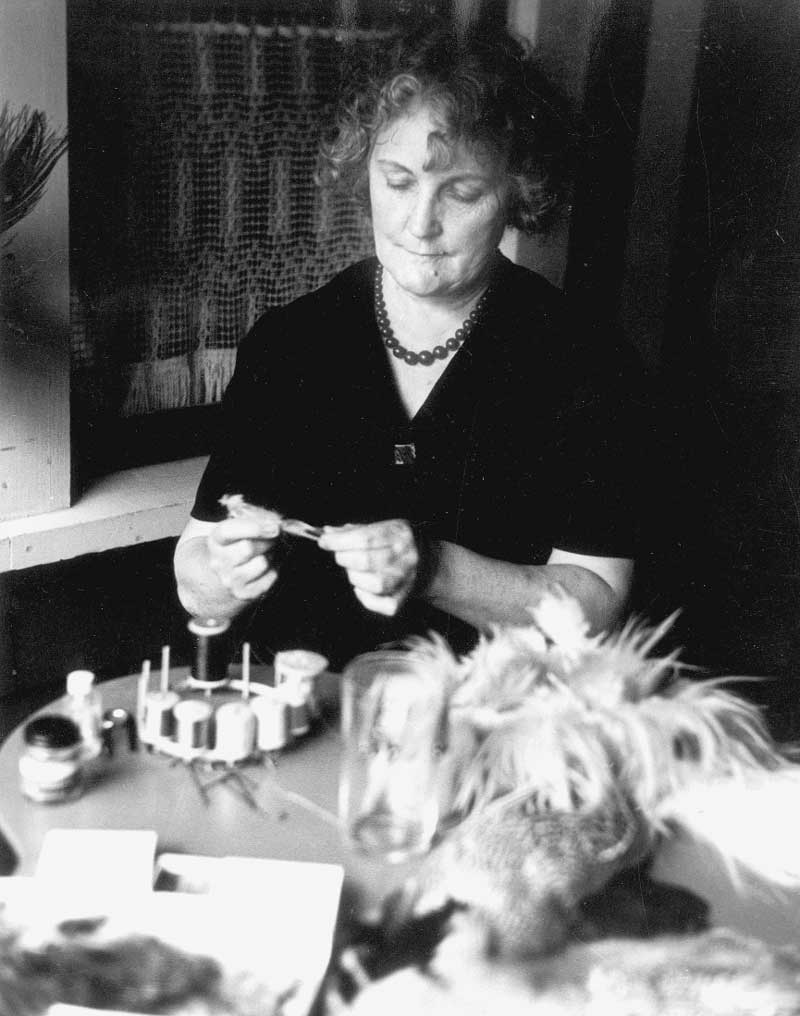 The self-taught Carrie Stevens at work making one of her streamers. She originated more than 150 streamers, including the Gray Ghost. Photo courtesy the Outdoor Sporting Heritage Museum Wallace’s wife, Carrie, was the creator of the pattern I had been casting for the last few hours, plus many other streamers well known to anglers throughout the country. In 1970 a plaque was placed on the far side of the dam honoring this first lady of the streamer. Later in his life, another of Upper Dam’s better known anglers, Col. Joseph D. Bates, Jr., wrote a number of books based upon his experiences casting streamers in these hallowed waters.

On that August afternoon, my attention quickly turned back to the dark water under Upper Dam as a huge brook trout rose to inspect the Gray Ghost that I was working along the shoulder of a submerged boulder. It seemed as though remnants of feathers and fur of nearly every make and model of streamer swung from the fish’s unusually white maw when it grabbed Carrie’s pattern in the corner of its enormous jaw. Swinging its head in the opposite direction, the great trout snapped my heavy leader as if it were yarn. I could have sworn it grinned at me before plunging back into the depths under the dam.

I knew that the pools lying under Upper Dam had been home to enormous brook trout as late as World War II. But by the time I began visiting the region, landlocked salmon had come to dominate the fishery. Even so, from what I was able to determine, this legendary trout known as Pete seemed to survive throughout the years, time and again finding a way to outwit his pursuers. Reports of this extraordinary trout’s exploits began soon after the dam was constructed, continuing through 1923 when another of the Upper Dam notables, Charles Edward Wheeler, memorialized the legend in his poem: The Ode to White Nose Pete. 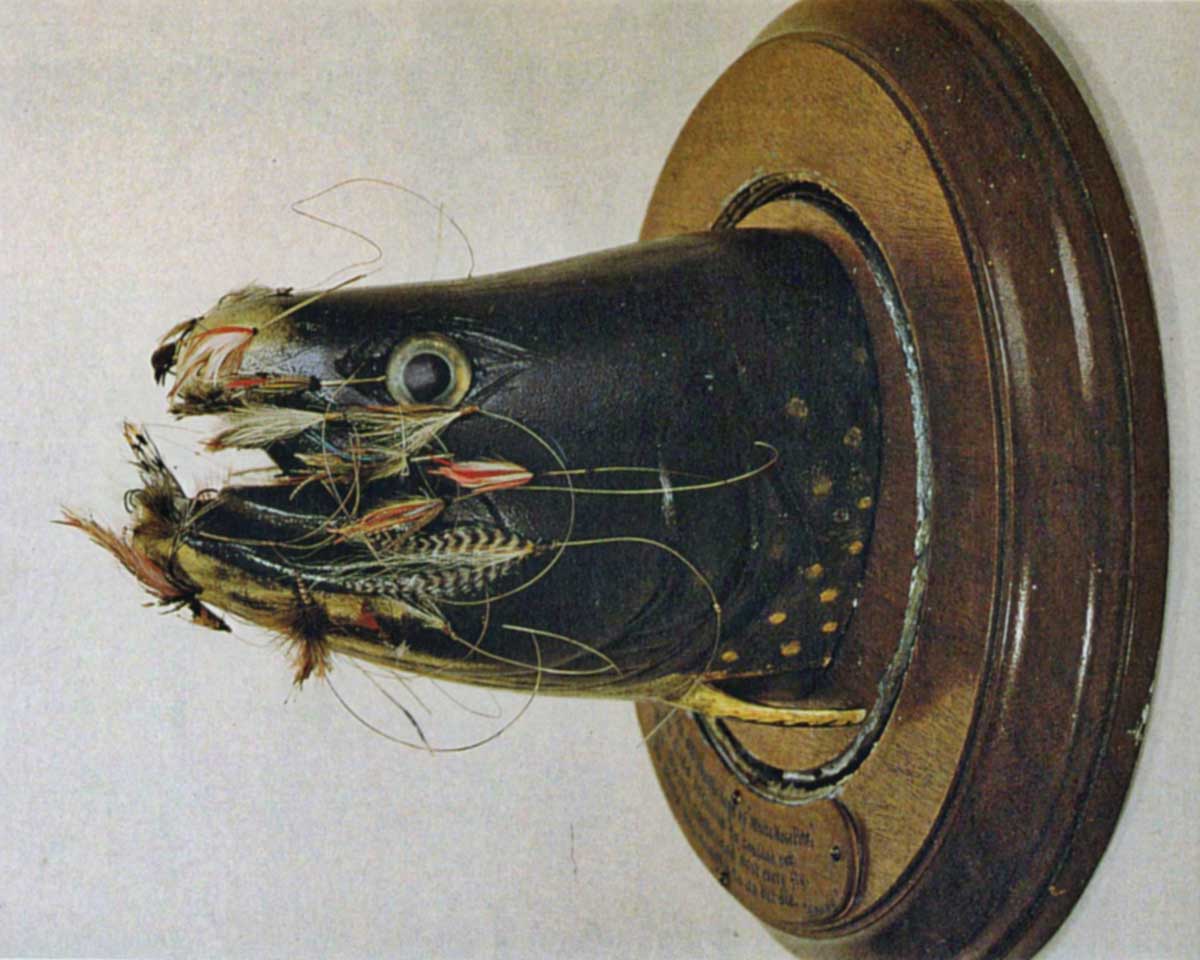 Shang Wheeler, who was known for his duck decoys, carved this model of a trout filled with flies and then claimed it was the infamous White Nose Pete. Image courtesy the Outdoor Sporting Heritage Museum Better known as Shang to his friends, Wheeler was an accomplished angler and long-time friend of Wallace and Carrie Stevens. He also was renowned for duck decoys that he carved for his friends, winning first prize in the amateur category of the International Decoy Makers Contest for 12 consecutive years. It was Shang who encouraged Carrie to tie her first streamer.

By the time Shang wrote his paean to Pete, most anglers agreed that the fish breaking their lines was one of Pete’s descendents, for surely a brook trout could not live for over 100 years. Or could it? There remained a few true believers, one of whom was the aforementioned Colonel Bates. 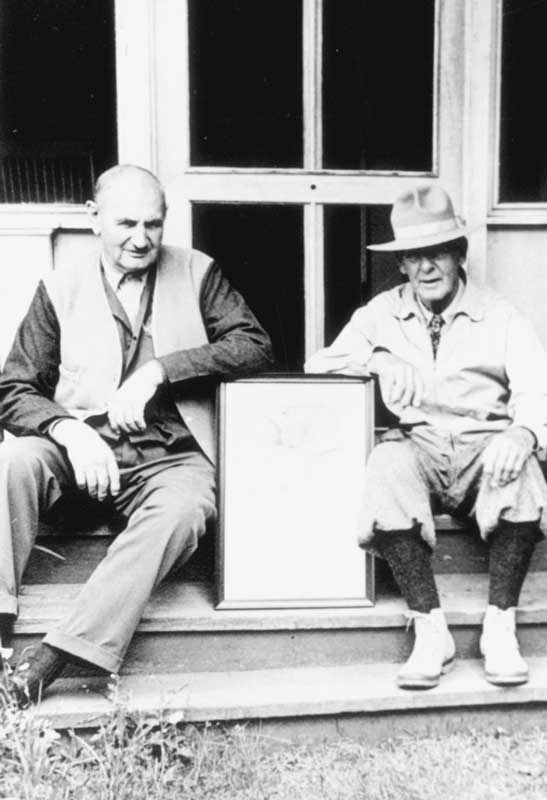 Husband of Carrie Stevens and outdoor guide, Wallace Stephens, right, sits with Wheeler who holds a copy of his The Ode to White Nose Pete. The last verse says it all: “I’ve taken on all comers, and I’ve met some tough ones too. But they’ve all gone ashore without me, and I’m out here READY FOR YOU!” Image courtesy the Outdoor Sporting Heritage Museum As retold in Graydon R. Hilyard’s authoritative book published in 2000, Carrie G. Stevens: Maker of Rangeley Favorite Trout and Salmon Flies, the colonel (only a captain at the time) fought the wily brook trout on a September afternoon until his line went slack, Pete once again emerging victorious. Afterward, while stationed in the Pacific, Bates wrote to Wallace Stevens, inquiring as to whether the fish remained at large. Writing back, Wallace enclosed a photograph of the venerable trout’s head mounted under glass. But in another letter, Wheeler implied that the mount was a fake carved from wood, and that before leaving for that season he’d seen Pete finning contentedly below the dam.

For years the mystery persisted, with sightings of Pete reported from time to time while the wooden mount disappeared from public view. The mount re-emerged in 2010 and now hangs in the Rangeley Outdoor Sporting Heritage Museum, with the following words inscribed beneath:

Here’s all that is left of White Nose Pete,

His mouth contained most every fly.

So there was naught to do but die.

Wheeler was known for his sense of humor. He mounted this light-hearted carving of a salmon with fur—aptly named Salmo Polaris—after a late-season blizzard in May 1945. Photo by Trish Romano

If you’re in the Rangeley Lakes Region on one of those summer evenings when the lupines are in bloom and there is a breeze in the air, take a drive down the logging road. Listen to the aspens whisper their secrets as you walk past the gate. Hear the mighty rush of water as you approach the newly constructed modern dam. Take a moment to stare down into one of the many deep pools below. Blink and you may miss that enormous brook trout with the white nose, the one that appears to be smiling from the swirling current. Look harder and you may spot my Gray Ghost streamer among so many others jutting out of its jaw, for I have it on good authority, at least as reliable as Shang Wheeler, that ole Pete continues to haunt those dark waters below Upper Dam.

Robert J. Romano, Jr. is the author of the Rangeley Region series of novels. The tenth anniversary edition of his book of essays, Shadows in the Stream, was released last summer. Information about Bob and his books can be found at his website: forgottentrout.com. 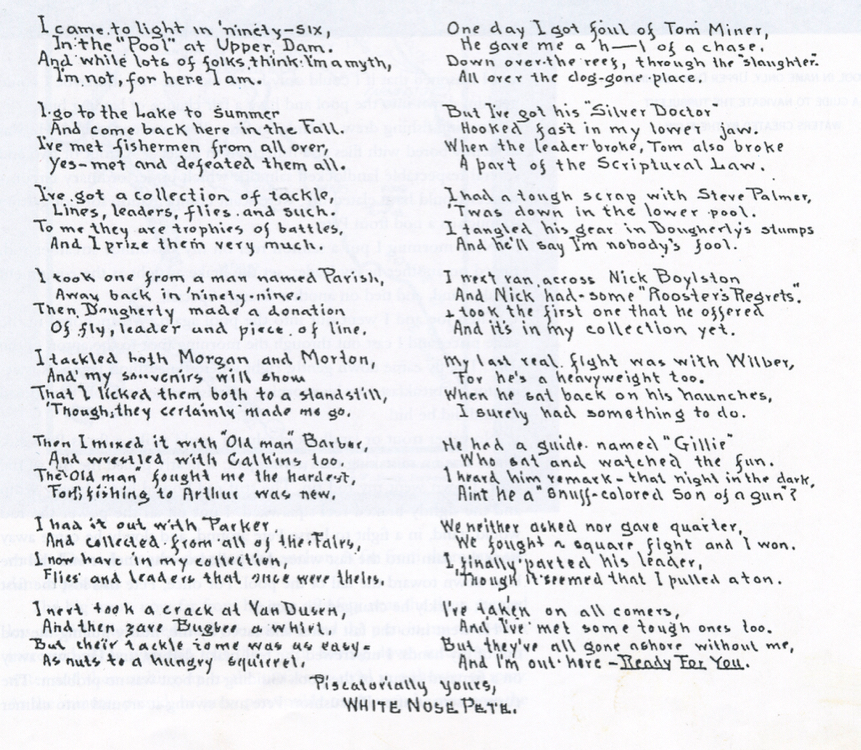