Grandeur on the Lake 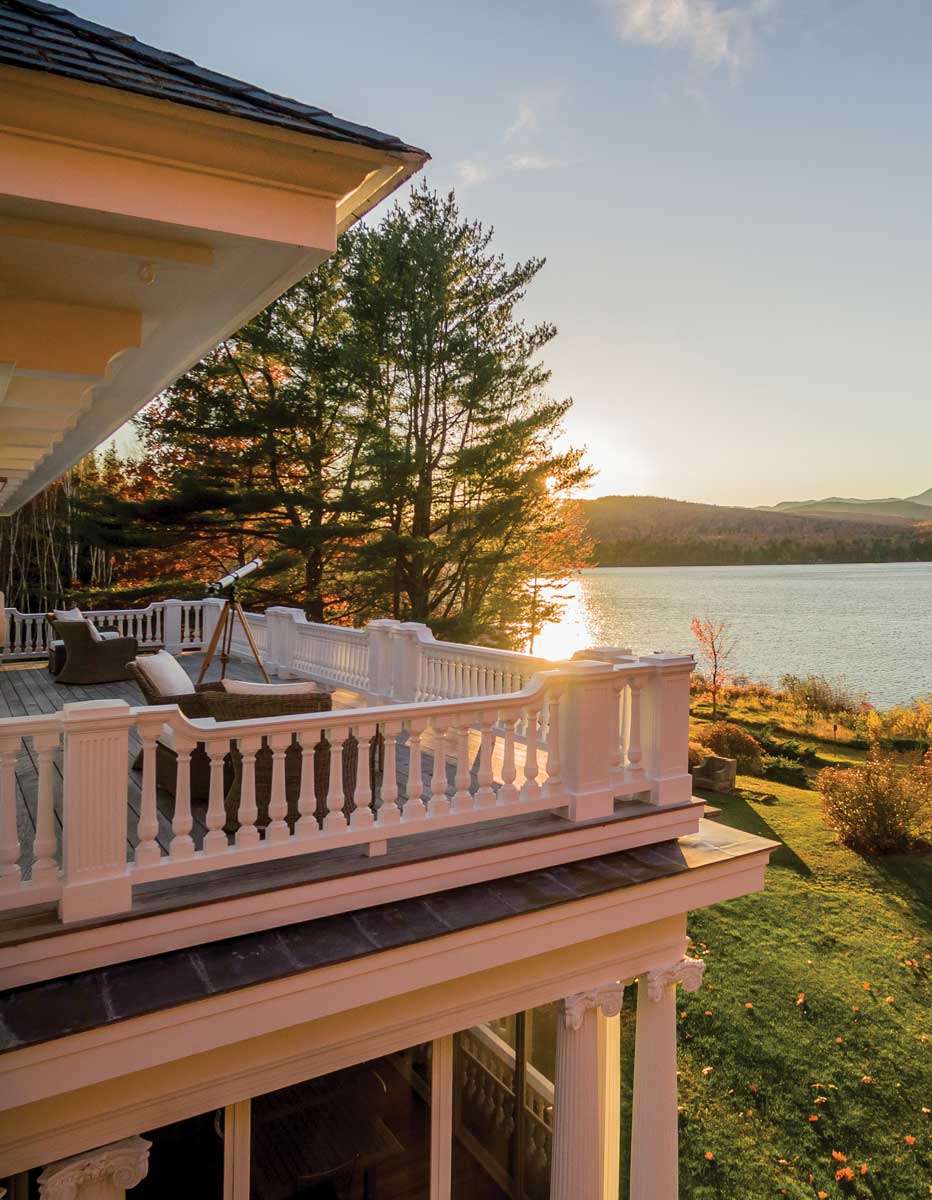 The deck above the entry porch is the ideal place to take in the view and to watch the sun set behind the White Mountains. The deck’s new railing was modeled after the house’s existing architectural elements. Nothing about this house is what you would expect. On a lake whose vacation homes are unassuming summer camps, this house is grand, architecturally distinct, and painted white.

Lakeside summer camps tend toward ramshackle construction, but the walls of this house are 10 inches thick. The roof is slate, the foundation consists of economy-car-sized granite blocks, and Corinthian columns grace both the exterior and the interior.

Ever since it was built in 1908, the stately Garcelon House on the north end of Kezar Lake has attracted attention.

“When we took a boat out on the lake, we always pointed to it,” said the homeowner. “For years, we had a cottage a little way down the shore, and we would talk about how unusual it was to see a big white structure like this facing the lake. It looked like an important house that belonged in a wealthy suburb.”

Charles Augustus Garcelon, the original owner of the house, was a Mainer born and bred. His ancestors helped found the city of  Lewiston, Androscoggin County, and Bates College; they started the Lewiston Falls Journal, and as farmers were reputed to have the finest horses, the best orchards, and the biggest cabbages. 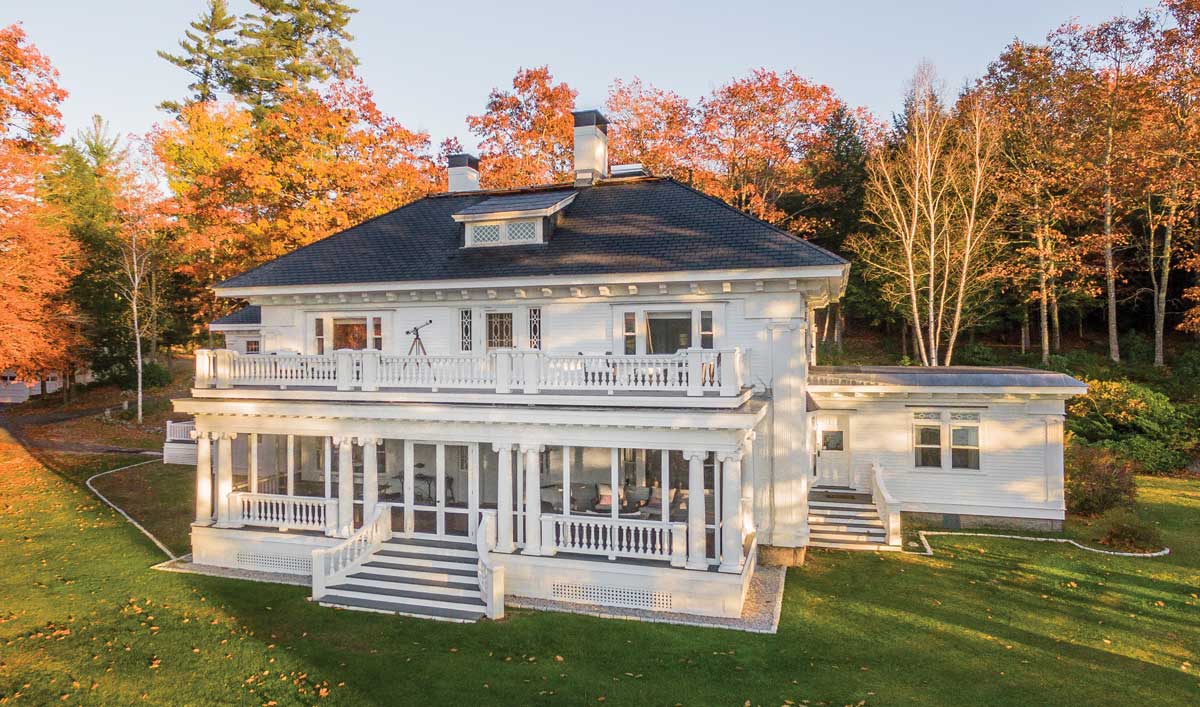 With its neoclassical styling, a slate roof and a white exterior, the Garcelon House has considerable presence on the hillside overlooking Kezar Lake.

Garcelon, who was 18 when the Civil War started in 1861, distinguished himself in the war, and upon its end, found a position with the newly formed Pullman Car Company in East St. Louis, Missouri. He began work as a conductor, but soon climbed the corporate ladder. In 1889, he became the general manager of the company, which at the time was one of the largest industrial corporations in the world. When he retired in 1906, it was with the plan to build a mansion for his family back home on Kezar Lake. He called it “Gammahok,” after the words of a grandchild who could not say “Grandma’s House.”

Blame Robert Todd Lincoln for the house’s grandeur. The son of the sixteenth president was the CEO of the Pullman Company and worked with Charles Garcelon every day. In 1905, Lincoln built a Georgian Revival vacation home for his family in Manchester, Vermont. Called “Hildene,” it has much in common with the house Garcelon built three years later, including neo-classical styling and superb materials and workmanship. Although no paper trail has been found to prove it, contemporary historians believe that the same European craftsmen who built Hildene moved to Maine to build the Garcelon House when they were done in Vermont.

The house had several owners after it passed out of the Garcelon family in the 1960s, and by the time the current owners bought it in 2012, it had deteriorated. They could have torn it down and built something else on the spectacular hilltop location. But they did not.

“My husband felt strongly that we should save the house as an important part of local history,” the homeowner said. “I was happy in our little cottage down the lake, but he won me over. And, it appealed to us to have a place where we could entertain.”

When they took possession, paint was peeling inside and out. The new owners hired Lovell painter Allen Dotson. He knew right away the house needed more than new paint. “I can help,” he said, “but you need a lot more than what I can do.”

Dotson led them to Mark Conforte, a Lovell builder. He, in turn, suggested that skilled architectural help was in order, and connected the couple with Paul Attardo of Attardo Pondelis Architecture in Yarmouth. Attardo oversaw a renovation that reconfigured the kitchen, found space on the first floor for a full bath, enclosed the front porch, and installed en suite bathrooms for all the second-story bedrooms. All of this was done without breaking through any exterior walls; the house’s footprint is the same as it always has been.

The 9,000-square-foot house orients toward the lake with a front porch supported by a series of Corinthian columns. The front steps widen as they descend and the handrails curve outward in a graceful, welcoming embrace. This motif is repeated inside, where the broad staircase terminates in the living room with similar curving rails. When Conforte built a new stairway for the side door, he was careful to match that curve.

“It was quite a job,” he said. “Straight is easy; a curve requires careful work.” 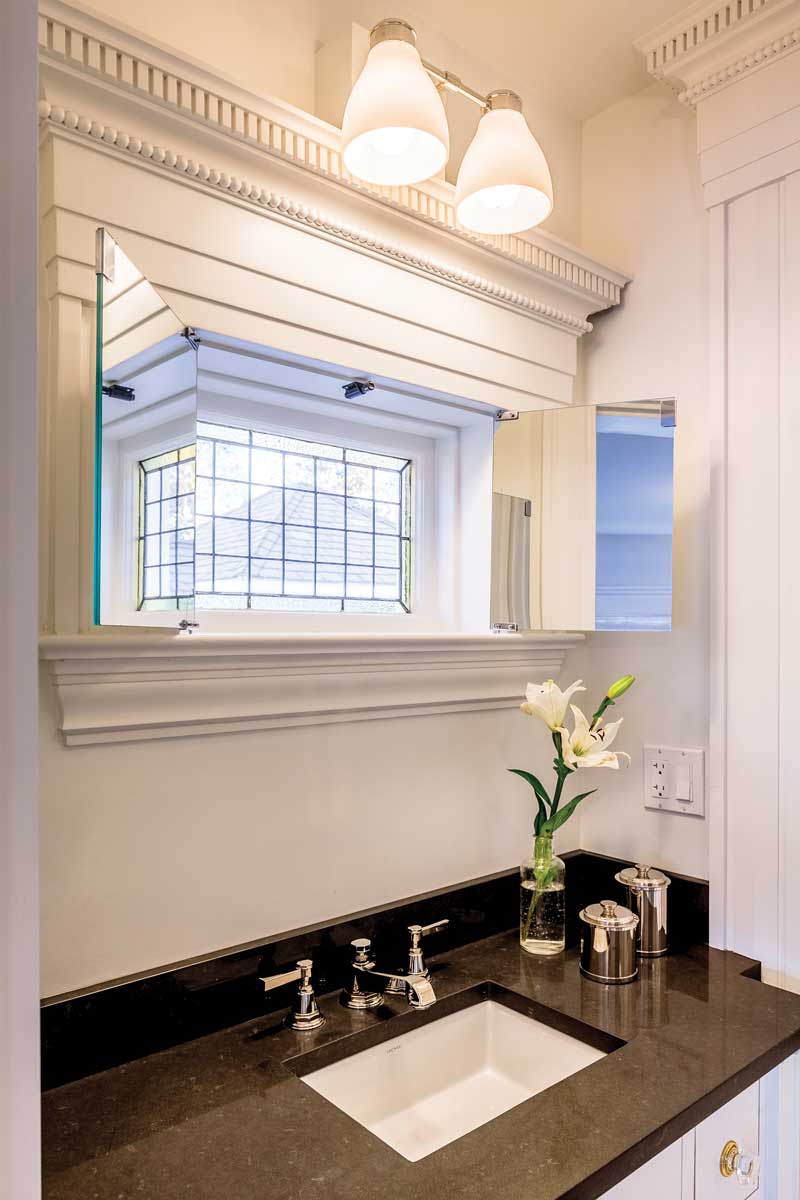 The dilemma was how to keep an existing window in a powder room but also add a mirror. The solution was a mirror that swivels aside when not in use to reveal the view. He and Attardo put a great deal of care into the new kitchen. This became possible when they removed a narrow servant’s staircase. Now the large kitchen stretches across the back of the house and connects directly with the living rooms; it had previously been a landlocked, difficult-to-reach space.

The kitchen boasts superb new appliances, a large central island, an informal dining area and a pantry with the largest, deepest stainless steel sink the owners could find. Conforte built new cabinetry that matches the 1908 originals. He re-used original elements whenever possible, and even cleaned and installed a toilet that dates to the house’s origin, complete with wall tank and pull chain. The old claw-footed bathtub now has pride of place in the master bathroom.

“Taking out that back staircase also gave us the room to install bathrooms upstairs,” Attardo pointed out. “The master bedroom had its own bathroom, but the other three bedrooms upstairs shared one bath.” He and Conforte also installed a guest suite on the first floor, bringing the number of bedrooms to five.

Conforte took his design cues from existing elements as he replaced rotting wood, built new pocket doors, put a new deck and railing on the second-floor  porch, and otherwise updated what needed repairing and replacing. A north-facing section of the slate roof required repair; Victor Wright of Waterboro’s Heritage Roofing carefully matched the original Munson slate with pieces from his own collection so that the roof looks seamless.

Of all the work, the painter who started the process did the most.

“It took Allen Dotson two-and-a-half years to take down all the old peeling paint and apply new paint,” the homeowner said. “He told me that it was the crowning achievement of his career.”

All of the old paint was stripped off down to the original wood, inside and out. The complexity of the trim, combined with repairs to cracked and decaying pieces, called for slow, patient work.

The large rooms are furnished with unassuming, comfortable furniture that is right for a lakeside vacation home, but also suits the house’s architectural distinction.

“We never did any conscious interior design. We have let the house be decorated as it goes,” the homeowner said.

She and her family use the house for year-round getaways, and now entertain the way she and her husband had always wanted to.

“We hosted a dinner for the historical society and seated 60 people,” she said with a smile. “For Thanksgiving, we had 50, for a family reunion, 75.”

Charles Garcelon would be proud.