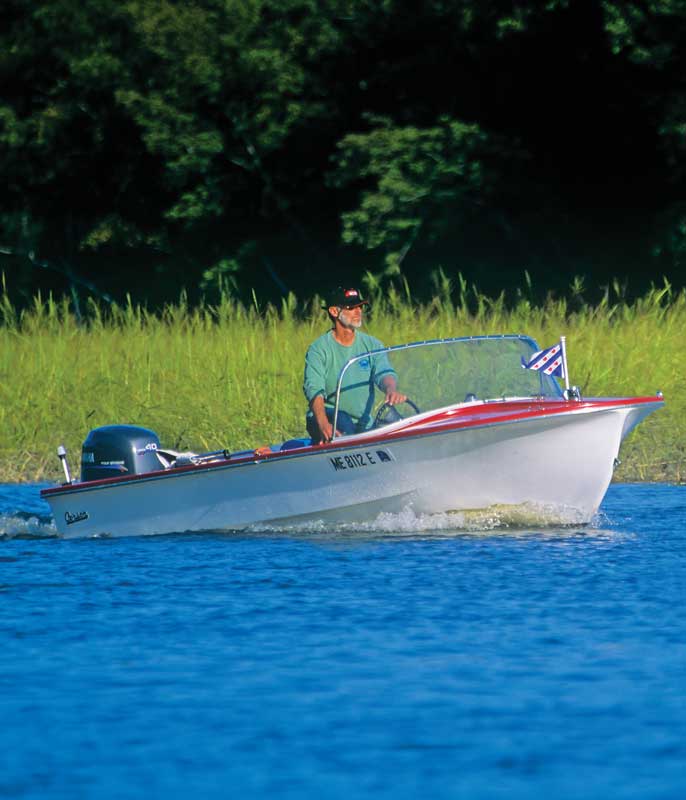 The author restored this Corson runabout and has taken it all over Maine. It dates to 1958 when the Corson Boat Company was building its brand name. Photo by Joe Devenney Hang around just about any Maine boat ramp and the odds are good a Corson runabout will show up sooner or later. Like lobsters, potatoes, and blueberries, they are a boat with as much “Maine-ness” as maple syrup and whoopie pies. Even today, long after the Corson brothers—Gerry, Linwood, Clayton, and Anson—of Madison, Maine, ceased production of their boats, they are prized for their practicality, durability, classic good looks, and affordability.

“I can’t even begin to guess how many we sold,” said Howie Kirkpatrick Jr., who was a teenager in the 1960s when Corsons were in the early days of production. His father, Howie Senior, was an early Corson dealer at BFC Marine on the Kennebec River in Bath, Maine. He was among the few who saw the potential of this newfangled “fiberglass” hull the Corson brothers were touting. “I do know they went out (of the showroom) about as fast as they came in,” Howie Junior recalled. “Especially after we got that picture of Anson on the iceberg.” 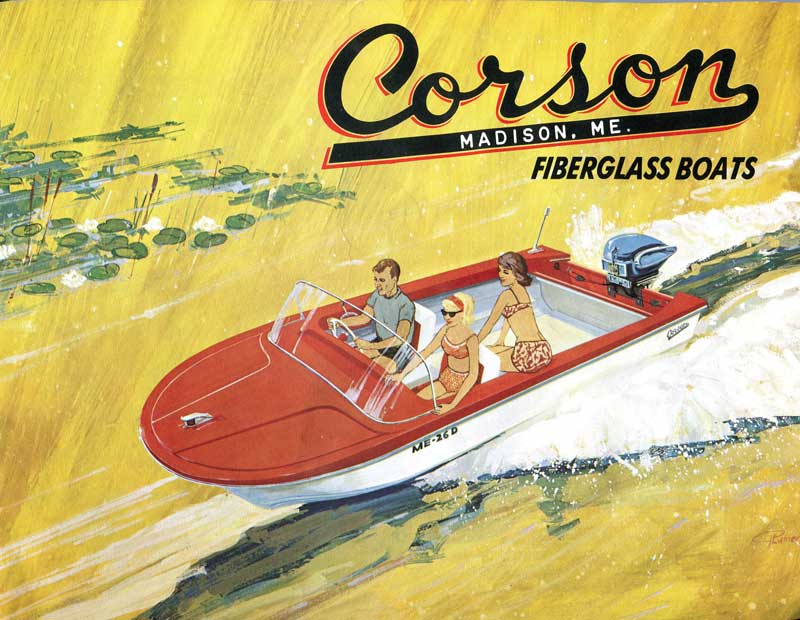 An early brochure for Corson. They sure don’t make then like this anymore! Catalog courtesy Lincoln Davis Iceberg? Well, that’s only a slight exaggeration of the toughness and family-fun attitude that was built into the early Corson runabouts, which ranged in size from 14 to 19 feet. The iceberg story (which we’ll get to later) was just one of the many mostly inadvertent marketing tales to come out of Madison, where the outboards were built by the truckload in a barn not much bigger than today’s average two-car garage.

“Yeah, it was pretty tight in there,” recalled Greg Corson, who as a teenager in the 1970s worked for his father, Gerry, and his three uncles, Linwood, Clayton, and Anson. Even in the barn’s limited work space, the Corson brothers eventually turned out an estimated 350 boats per year, many of which had to be tailored to the preferences of individual buyers. Exact records of how many Corsons were built between 1955 and the mid-1990s no longer exist. Most educated guesses put the total around 10,000. And most of those boats should be around for a long time to come, Greg said, because “we built them to last. We didn’t cut corners and each hull was laid up by hand.”

It was the durability of the new “space age” materials that persuaded Anson to phase out building wooden boats in the 1950s and switch to fiberglass. 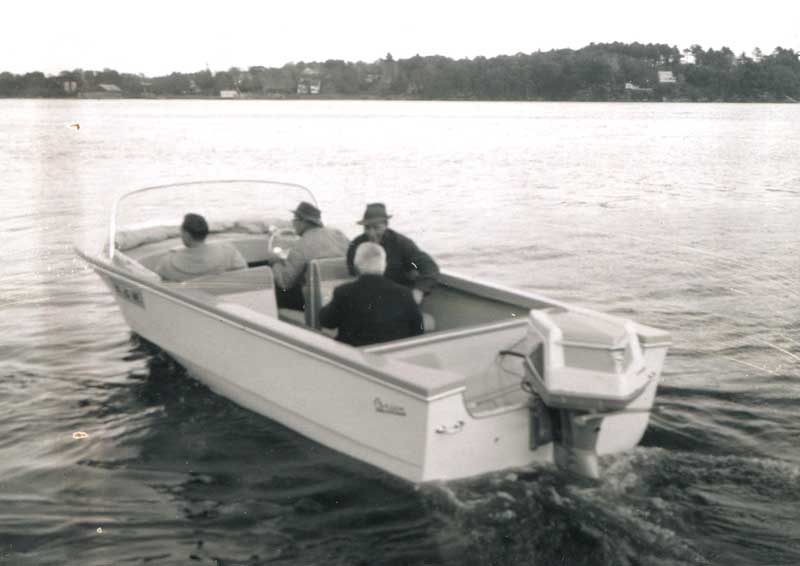 Anson Corson began his boatbuilding career in 1937 at the Skowhegan Boat Company, a few miles down the road from his home in Madison. There, he learned to build mostly cedar-on-oak “lake boats,” which were primarily canvas-covered flat-bottomed runabouts designed largely for the calm waters of Maine’s inland ponds, rivers, and lakes. Those design concepts stuck with Anson when he started his own boatbuilding firm in Madison in 1946. That was shortly after Skowhegan Boat went out of business after a devastating fire.

Initially, Anson continued to build in wood and for the wholesale market, becoming successful enough in the next three years to add his three brothers and his father, Freeman, to the boatbuilding team. Wives kept the books and ran the office while sawdust flew in the diminutive barn at 9 Houghton Street.

Soon enough, orders for boats were coming from all over New England and operations temporarily moved closer to the dealerships, to Sebago Lake Village at the south end of Sebago Lake. There, the wooden boats were sold by a local entrepreneur under the name Sebago Boat Company; the boats were sold under some other retail names elsewhere around New England. 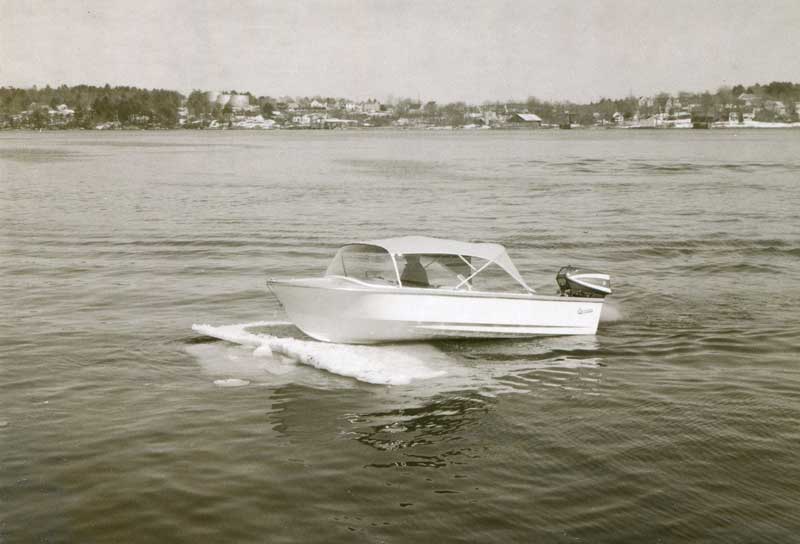 Anson Corson drove one of his boats right up on an ice floe in late spring on the Kennebec River to demonstrate fiberglass’s legendary durability, circa 1960. The legend of “Anson on the iceberg” was born. Photo courtesy BFC Marine

But Anson wanted his own brand and a special niche in the boatbuilding world. So in 1955, he left Sebago Boat and returned to Madison to set up the Corson Boat Company in the barn on Houghton Street, along with younger brother Gerry, who had just returned from Korea after a stint in the U.S. Marines. Together, they started experimenting with fiberglass hulls. The new fiberglass boat designs were mostly based on those old “lake boat” designs.

“It was all very new then,” Gerry recalled decades later. “We had a lot to learn.”

Other builders at the time were also experimenting with, and then switching to, fiberglass. Making fiberglass in those days required mixing petroleum-based chemicals that reacted exothermically as they hardened. “Exothermic” means the chemicals produced heat—sometimes a lot of heat. “It was not unusual to see smoke on one end of the boat while you were finishing the other end,” Gerry explained in an interview in 1999, seven years before he died. As a result, some early hulls never made it to the finishing room and remained a “learning experience.”

In any case, early boatbuilders using fiberglass could produce a hull in much less time than it took to produce a wooden hull. Fiberglass boats could therefore be priced very competitively.

At boat shows, builders in fiberglass often would invite potential customers to take a sledgehammer to a cured portion of fiberglass cloth mat that had been reinforced with those exothermic polyester resins. Unable to make a dent in the new hull material, the stunt participants created word-of-mouth advertising for fiberglass that spread rapidly and enthusiastically. The end of wooden production boats became only a matter of time.

Back in Madison, the Corson’s trademark high-sided, flat-bottomed designs just added to the new boats’ allure. “They were cheap power hulls,” said Lincoln Davis, a Maine-based outboard mechanic whose experience has spanned the decades of the popularity of Corson runabouts. “Cheap power” meant you could use a fairly low-horsepower outboard to move the flat-bottomed Corson boat very fast; as is the case today, the lower the horsepower, the cheaper the outboard.

“Those high sides made people feel safe, too,” Davis said. Boating in those days was considered a family affair, with Dad at the helm of this rocket-like contraption.

Anson’s instinct to give his early designs lots of reserve buoyancy—with the trademark high sides and big, broad bow section—appealed to novices and experienced boaters alike. Within four years of the founding of Corson Boat Company in 1955, Anson and his brothers completed the transition from wooden boats to fiberglass-only and never looked back.

Contributing to the Corson success story in subsequent years was Anson’s annual spring pilgrimage to various Corson dealerships around Maine and elsewhere in New England. As was the case at Kirkpatrick’s dealership on the Kennebec River, Anson often brought along the latest iteration of one of the five or six Corson designs available that year. And of course, he always insisted on demonstrating the boat.

“It must have been early in the spring that year, when the ice was still going out of the river,” Kirkpatrick recalled. After a few quick turns over the Kennebec’s frigid waters near Bath, Anson decided to drive the little runabout right up on a particularly large ice floe. Photos were taken and the early 1960s story of “Anson on the iceberg” was born, adding to the legends about the durability of Corson boats.

Chemists finally got the process of fiberglassing resins under better control in the1960s. The smoking hulls disappeared and the Corsons could concentrate more on making refinements to their boats. New models were introduced, cushioned seats replaced wooden benches, outboard options multiplied, and an inboard-outboard model was even introduced. The 350 boats they produced each year were generally sold before they were even shipped. 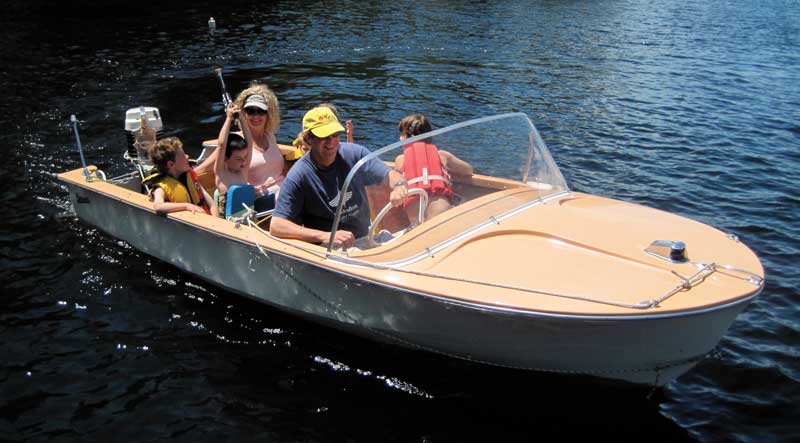 Well-built and well-designed, Corsons remain a common sight on Maine waterways today, even though the company ceased production in the 1990s. This one was built in 1963. Photo by Polly Saltonstall 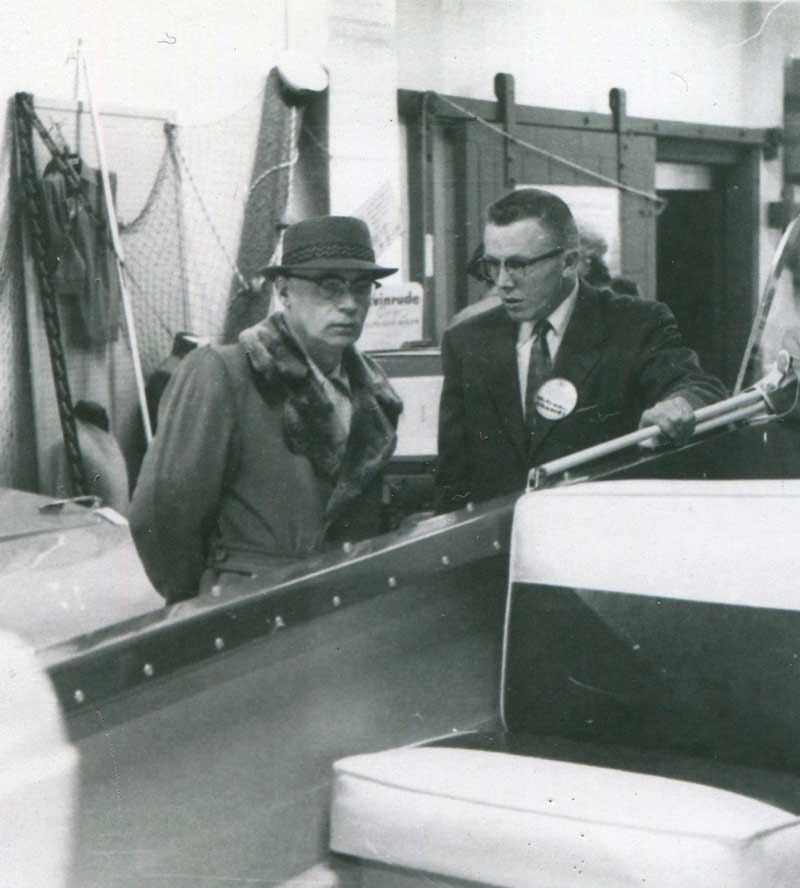 Anson Corson discusses a new offering: cushioned seats. Early Corsons featured wooden bench seats. Photo courtesy BFC Marine Unfortunately, the same traits that made the Corson boats so desirable were also part of the reason the brand eventually faded out. The durability meant a boat would last for decades without needing replacement. So creating the brand loyalty seen by owners of a Ford or Chevy wasn’t really possible. Additionally, those “cheap power” flat-bottomed designs tended to pound loudly and bone-jarringly when winds kicked up a chop on a bay or a larger lake. A V-shaped bottom could handle choppy waters with much less fuss, but required more horsepower. And Corson Boat Company only had one such design, which was rolled out late in the company’s history.

Also, a business that relies on family to keep costs low and products competitive can’t replace workers very easily. The 1970s were doubly challenging when brother Linwood died and the Arab oil embargo forced the price of fiberglass resins to nearly quadruple in the space of a few years. By the 1980s, production was still profitable, but the death of Anson in 1980, followed by Clayton in 1988, took a toll. Gerry carried on until the mid-1990s when production fell to only a shadow of the brand’s best years. Attempts in the late-1990s to sell the business failed and, after Gerry’s death, his son Greg took over the modest and steadily dwindling inventory of parts, plus the property. 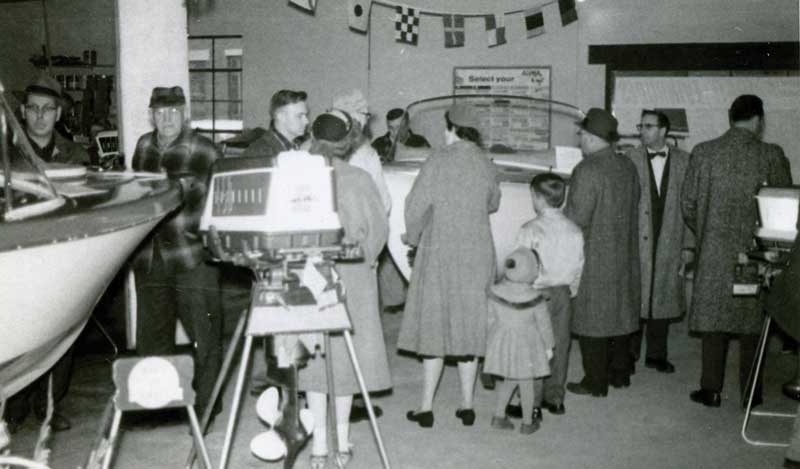 A boat show in the early 1960s was often a local affair, usually produced by a local boat and motor dealership, such as this one held at BFC Marine in Bath, Maine. Photo courtesy BFC Marine

Today Greg still hears from diehard customers who call every once in a while, looking for a replacement part here and there. “There’s not much left of it,” mused Greg, who moved on to the auto sales and body repair business, and is now nearing retirement himself. “Maybe they’ll become collector’s items. I don’t know. There are so many of them still around. We really did build them to last.”

Ken Textor has been working on and writing about boats since 1976. He resurrected a 15-foot Corson runabout in 1999 and his family has been using it around Bath and Boothbay area every summer since.