And a trip down the Big Muddy 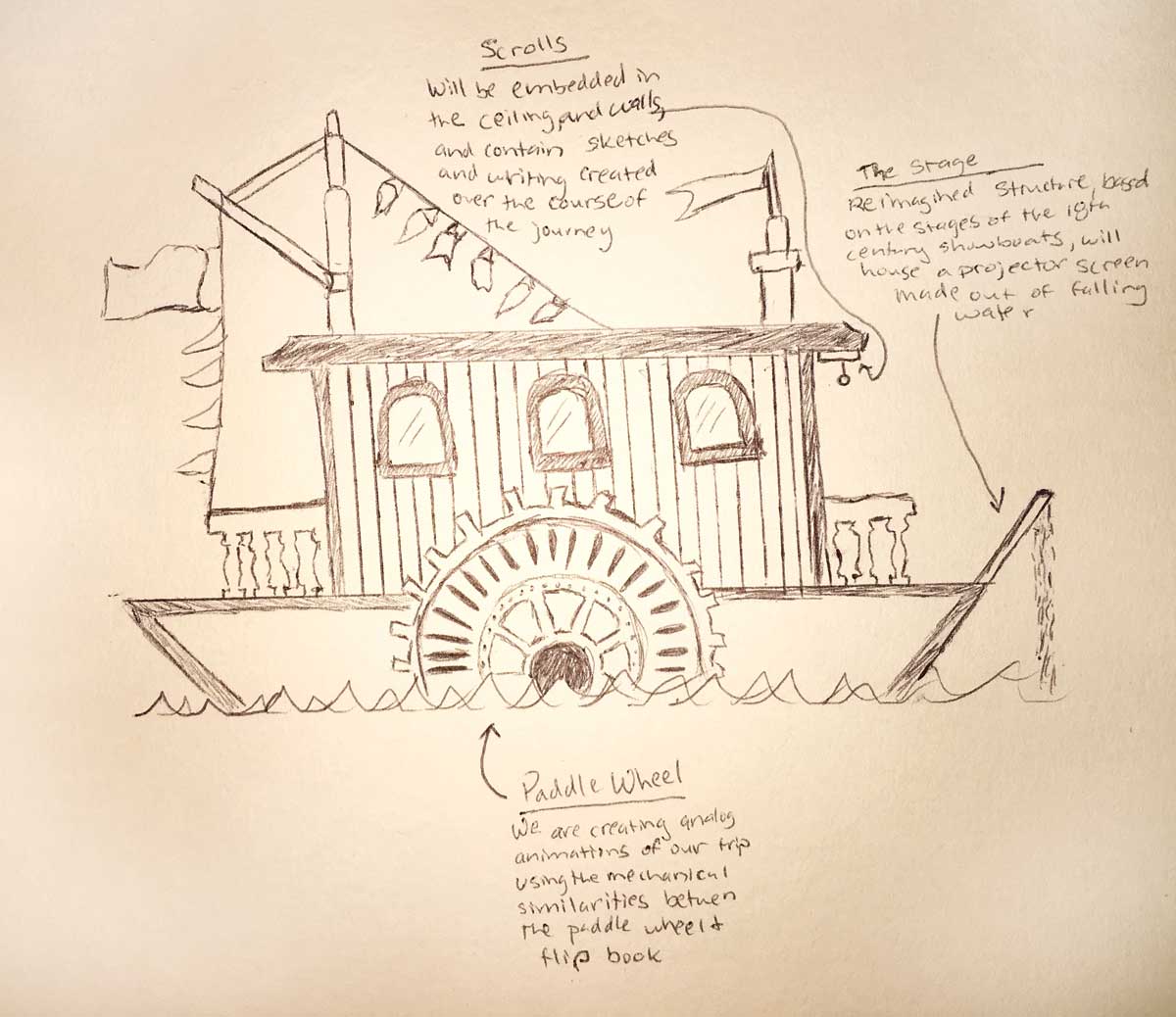 A concept drawing of Michi Zeebee, which was designed to become a multi-media portrait of the river. Illustration by Morgan Rogers

Last summer we began to build a riverboat. This summer we plan to take it down the length of the Mississippi River, from Minnesota to New Orleans, as part of a floating art project.

The boat is a cross between a showboat, with colonial-era details and a working water wheel, and a “shanty” boat, those make-do water-borne homes found in eddies and crooks along the river, as well as in harbors along the coast.

We consider our boat to be a floating sculpture, and have named her Michi Zeebee—the Native American name for the river that later morphed into the word Mississippi through years of French mispronunciation. Michi Zeebee will begin her journey as a bare-bones watercraft, just the essential basics of her original design. As she travels down the river (powered by a 25-hp outboard, and aided by a hand-held pole and the force of the river currents) we will add elements that reflect the people, situations, and environment. By the time we cruise into New Orleans, the boat will have been transformed into a multi-media sculpture-portrait-narrative of the river.

The original design is a modified version of the Glen-L Water Lodge that dates to the 1960s. We changed the layout of the cabin, but not before talking to Gail Witt, whose father Glen Witt drafted the plans. She told us we’d have to “add an elephant to it” to sink it, so we took some artistic license. 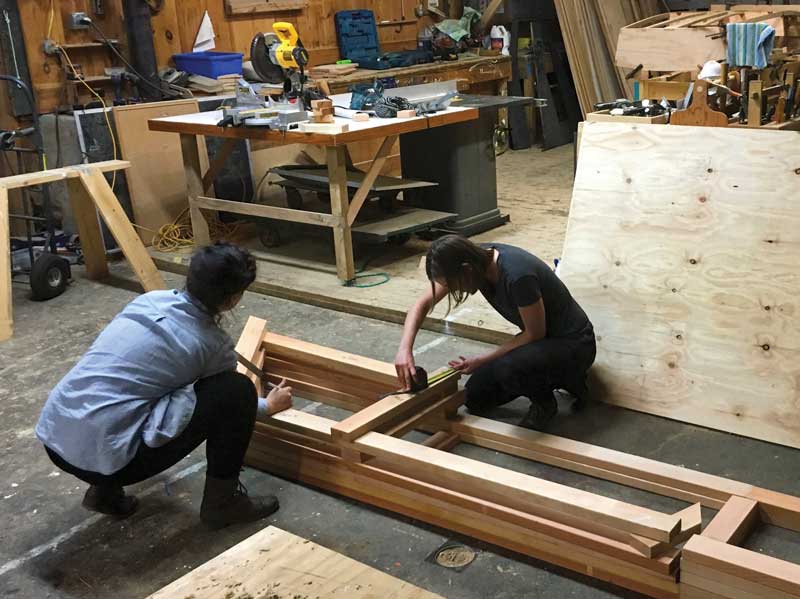 Emily Du Houx and Morgan Rogers laying out pieces of the hull at The Apprenticeshop in Maine. Photo by Estella Geisler We built the hull on the lawn of the Apprenticeshop in Rockland, Maine, one of the country’s oldest boatbuilding schools. It was our first time building a boat. Emily, who is a sculptor, had some building experience, mostly in metal and plaster. Morgan’s background was mostly in 2D arts. Even so, the notes with the boat plans promised that anyone could build it; so we rolled up our sleeves and slowly began putting boards together (much to the amusement of the builders at the Apprenticeshop, we’re sure) until we had something that was actually square, true, and floatable.

Despite our lack of plywood knowledge, amateur fiberglass techniques, and our backyard plans bought off the Internet, the fine woodworkers at the Apprenticeshop welcomed us warmly, offered advice (boatbuilders seem to love to give advice), and became an important part of the whole experience. Emily even stayed on at the shop as an apprentice.

We built the cabin space this spring and focused on finishing the ceiling and walls. Plans call for a July 3 launch. Michi Zeebee’s exterior walls will be carved into patterns inspired from the flora and fauna that live on the banks of the Mississippi. The pattern will start out as a carved bevel, but as we travel the river and collect items along the way—shells, rocks, plastic bottles, and the like—we will fill the carved recesses, inlaying and coloring them with the detritus of the river.

The interior will have arched ceiling beams inspired by old showboat interiors. The rest of the space will be relatively sparse, as is the case with many shanty boats. Drop-down mechanisms will house rolls of blank paper, which will eventually be filled with notes and drawings from our adventures on the river.

On deck, in place of a traditional showboat’s stage, we are rigging up a mechanism to create a screen from water pumped from the river. We intend to project sonar scans of the river bottom onto this water screen, bringing the rarely seen and volatile river bed to the surface for viewers on the banks.

Along with these artistic elements, we plan to collaborate with community members and artists at events to include: a talk at the National Mississippi River Museum and Aquarium in Dubuque, in collaboration with the Iowa Museum of Contemporary Art; the production of a single-day publication on stories of the river, to be distributed in St. Louis; a water-based performance event with Urban Arts in Memphis; and a finale event in New Orleans, involving music and a gallery show.

Money for the project was raised through crowd-funding and a grant from the Rhode Island School of Design. Our journey will be chronicled online at carrierpigeonstudio.com and the public is invited to join us in New Orleans at the end of the summer.

Emily du Houx teaches at the Rhode Island School for Design (RISD) and is an avid boater. Morgan Rogers is a communications specialist and journalist with a passion for storytelling, environmental policy, and program development.