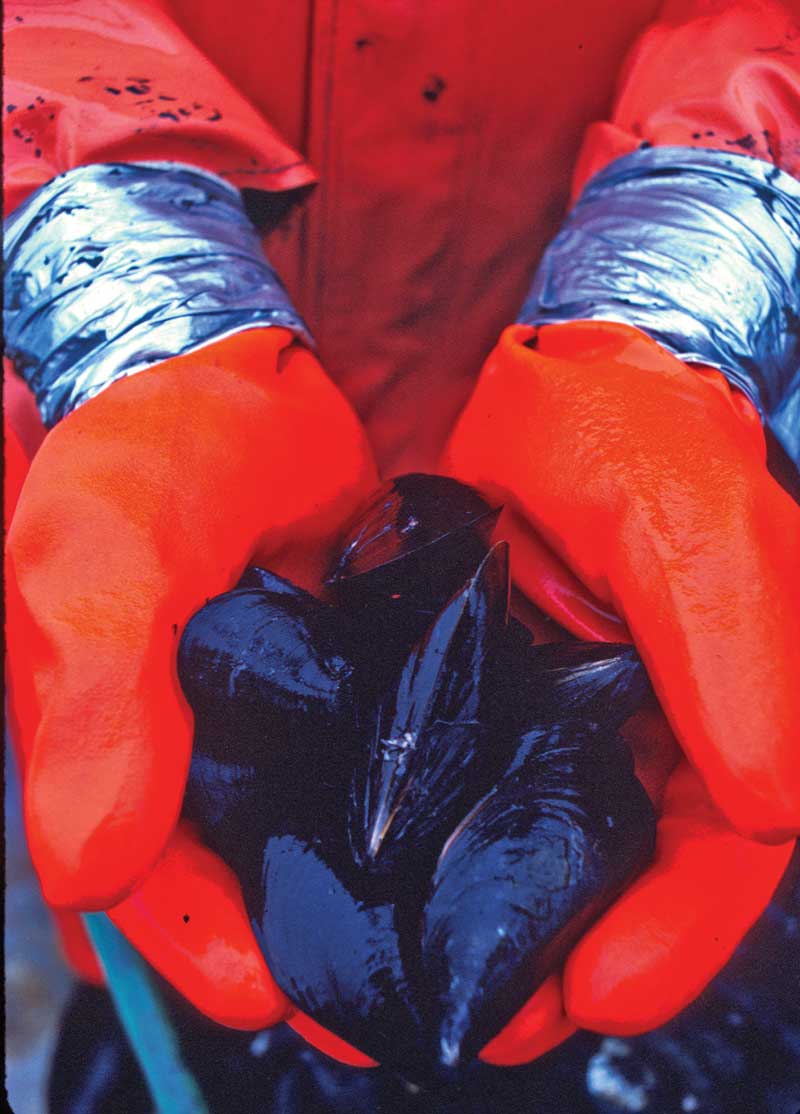 Secrets of the old-time mussel fishermen: Tape your gloves to your raingear to stay dry. Photos by Joe Upton

Maquoit Bay, a January afternoon in 1987: “Time to go,” my fishing partner Mike Mesko said, looking over his shoulder.

I followed his glance. The six- or seven-acre piece of ice that had been trapped against Williams and Sister islands with the ebb was moving back toward us with the southwest breeze. If we stayed much longer, it would pin us against the shore ice, and we’d be stuck. It was getting dark anyway and we’d already dragged up a full load of mussels—280 bushels (around 17,000 pounds)—pushing our 37-footer low in the water.

Only the faintest light remained in the sky by the time we made the narrow mouth of the Harraseeket River. Once inside the river, I had to steer out of the channel, almost onto the mud flats, to avoid a huge piece of hard freshwater ice being carried down river by the current. A few moments later I saw the lights of another mussel dragger, who’d been a few minutes behind us, going back and forth by the river mouth. The radio spoke in a twangy downeast drawl: “JeSUS... the frigging ice’s got the river right blocked off.”

The piece of ice had pushed farther down river and totally plugged the narrow entrance between Pound of Tea Island and Stockbridge Point.

After the boats rammed as far into Maquoit Bay as possible, the tidal current took the broken pieces away. In an afternoon, Upton and crew cleared perhaps four acres, enough to get back to the real business at hand: fishing.

Another voice came over the radio: “You might as well just relax and have a wee nip... you’re not going anywhere until the tide turns.”

“You got that right, buddy,” came the reply. Then we saw the lights of John Coffin’s South Freeport dock. Our truck was backing up to the hoist. Another day on the Casco Bay mussel grounds was almost over.

While dragging mussels in the middle of winter wasn’t easy, those Casco Bay mussels got us out of a tight spot. Mike and I ran a mussel aquaculture operation out on Vinalhaven. We ran out of wild mussels before our farmed mussels were ready to harvest, so when we heard that some good ones were getting dragged up in Casco Bay, we chartered a plane to have a look. We arrived too late to see where the guys were actually fishing, but I could see some loaded boats leaving the area south of the entrance to the Harraseeket River. That was good enough for me. 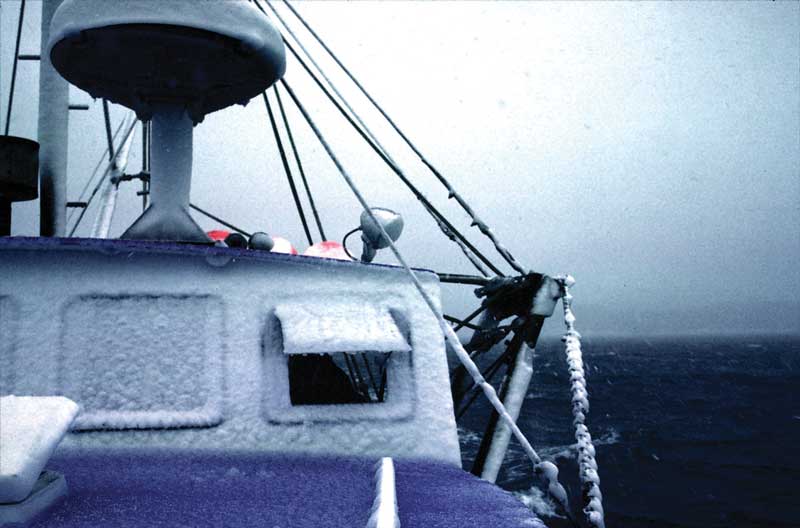 Winter fishing is a cold endeavor and brings additional challenges.

We got there two days later, and made our first tow in the intertidal zone, where we’d been accustomed to fishing back in Vinalhaven. Our drag came up half full of sunburnt and barnacle-covered mussels—nothing that our market, Great Eastern Mussels, would ever buy.

So we moved over a bit and tried again with the same result. Not good. Our trucker was on his way; the tide was going. Hmmm. So I tried again, this time fifty yards out, in slightly deeper water, just subtidal. We towed for the usual three minutes like we would on Vinalhaven, and when I tried to hoist the drag off the bottom, it wouldn’t move. Bummer. Figuring it must be full of mud and eelgrass. I sped up the engine to get a little more hydraulic oomph, and a moment later the drag broke water. We just gaped at the sight: it was full right to the throat and brimming over with the blackest, shiniest, most perfect mussels that’d we’d ever seen.

That was the beginning of what we called the Casco Bay Bonanza—day after day of steady, big, load-your-boat, put-the-name-in-the-water fishing. The amazing part was that we could fish the same narrow path with our 4-foot-wide drag day after day, and each time the drag would come up full, full, full, of those gorgeous mussels—rarely a barnacle, or a tuft of eelgrass, just those perfect mussels. Casco Bay Creamers we called them. The next day, when we’d got our first full bag on the exact same drag, we’d ask ourselves: “Did someone come out last night and dump a couple of loads of those perfect mussels back on the tow?”

In time we understood that the ecosystem of those wide shallow bays was perfect for mussels. What was essentially an underwater field of eelgrass was a great substrate for mussel larvae that attached to the eelgrass. As they grew, they collapsed the eelgrass to create a carpet of mussels a foot thick on the bottom. 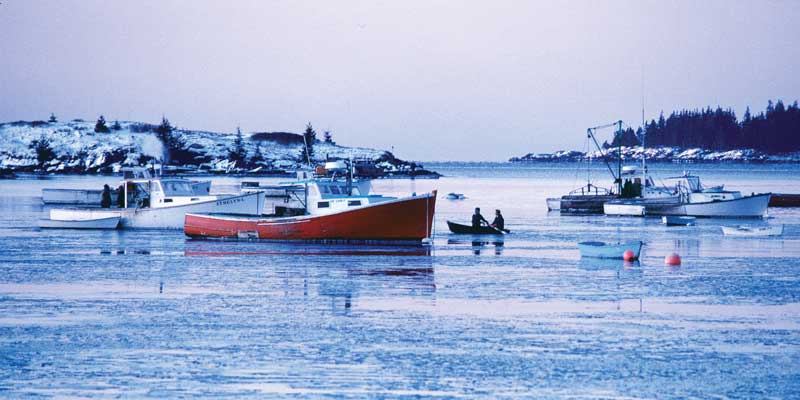 Sometimes the ice was so thick you could barely row through it to get to the boat.

We spent almost two winters fishing off Flying Point. As fisheries go, it was mellow—there were four other boats. We’d tie up and unload at John Coffin’s wharf. His lobster shack was closed, but he’d always have the coffee pot on for us in the morning. There was a hoist there for unloading. Plus we had a lot of market (we only fished when our market could take our mussels). Sometimes if we were fishing late and starting early the next day, we’d stay at the Freeport Inn, and eat at the bar in the Muddy Rudder Restaurant. This was before cell phones; Great Eastern would just call the Muddy Rudder Bar and ask for us, and we’d get our market orders for the next day.

In January and February, ice was a problem. I remember the first time it came off really cold and the bay froze. It had snowed, too. We were fishing Maquoit Bay then. We got to the edge of the ice and just stopped. A white sheet, snow over ice, extended back to the head of the bay a mile away. We proceeded gingerly; the ice was brittle, and the pieces that our bow broke up skittered away over unbroken ice as we passed.

Usually we could get through the ice okay, until, during a particularly nasty January with endless bitter winds and cold, Maquoit Bay froze solid. The Coast Guard’s ice-breaking tug down in Portland was too busy keeping Casco Bay ferry lanes open to spare a day for us mussel fishermen.

We decided we had to try and break through on our own. We hadn’t made a nickel for weeks and the wolf was at the door. So on a bitter afternoon with the wind blowing hard from the northwest, we went out—us and the crew on Bazooka, another tough, glass-hulled Repco 37 like ours. We decided we’d go in parallel, 30 to 40 feet apart and see how far we got. After a good quarter mile, the ice finally stopped us. Since the tide was ebbing, we waited for the current to carry the broken pieces away from the 50-foot-wide lane we had created. Then we ran at it again, full speed, this time traveling as close to the ice as we could, letting our wake break more ice, and then letting the current take that ice out as well. In an hour or two, we’d cleared enough to go fishing again. 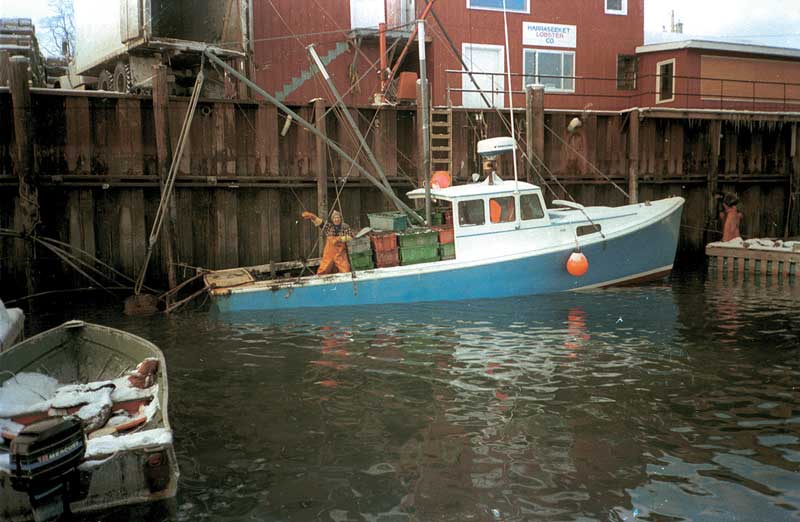 An extra-big load meant a stop at “Beaners” on the way home to pick up something for the gals.

You readers probably think that fishing in the ice this way was a hard berth. In reality, fishing Casco Bay those winters in the 1980s was some of the most memorable, even fun, fishing ever. First, there were plenty of mussels and just a handful of boats fishing them. Second, to a fisherman, plugging your boat—putting on a very big load—is simply thrilling. Third, it was fast paced; we’d typically only tow our drag a minute, two at the most. Mike and I had a well-choreographed dance to handle the towing and hoisting lines with the lobster-pot hauler that we used for a winch. Sure, it was cold, but we had a thermos or two of coffee, and usually duct-taped our gloves to the sleeves of our raingear so our hands stayed warm and dry enough.

Eskimo tribesmen I’d met back in my Bering Sea king crab fishing days told me that the Native tribes of far western and northern Alaska have many different words for the snow and the ice. When we fished in the ice in Casco Bay, its texture and feel varied depending on the temperature, the wind, the tide, even the amount of cloud cover, and I understood then why the Eskimos needed all those words.

Then there was this: We always drove right past “Beaners” in Freeport on the way home. So maybe once a week, on days when the mussels were really coming good, we’d make a couple of extra tows at the end, putting the name painted on the stern under water (that’s an extra big load). Then we’d stop at L.L. Bean on the way home to pick up something fun for the gals.

Joe Upton fished in Maine and Alaska for 25 years. His 1986 book Amaretto was republished in 2015 as Herring Nights: Remembering a Lost Fishery, by Tilbury House. He lives in Bainbridge Island, WA, and on Vinalhaven.