Salmon have a friend downeast 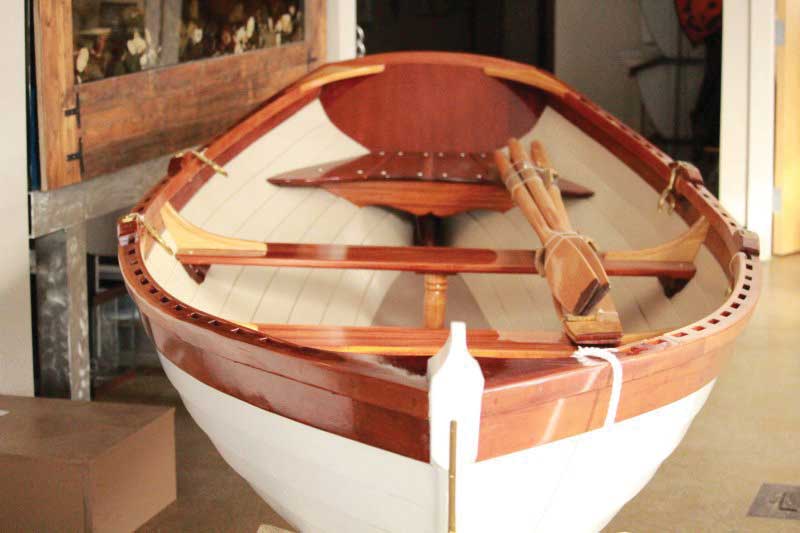 Courtesy Alan Kane I have been receiving your magazine for years, and consider it a true asset to Maine. You cover issues and things dear to many, and have a great track record.

I also have been involved with the Downeast Salmon Federation for years, and think their achievements and goals would be of great interest to your readers. Our role takes us way beyond the issues of Atlantic Salmon, and are very relevant to life on the coast of Maine. Catherine Schmitt has written some great articles relating to our rivers and various anadromous species.

The boat pictured here was donated to us by a former DSF board member. Built in Corea, in Bob Matey’s shop, it is a showpiece that blesses the entrance to our research hatchery facility in East Machias. In that same facility we have a state-of-the-art salmon hatchery gathering recognition not just here but worldwide. We have numerous projects relating to our rivers and streams, including a land trust. We are a big player in conservation issues downeast, an area that I’d like to see highlighted a bit more in your magazine. It’s a bit out of the way, but worth the effort and trip.

Thanks for the terrific story on charting the Maine coast. I so enjoyed reading it. You did a great job giving a feel for the changes in the ways NOAA and its predecessors have mapped the coastal waters and bottom. I like that the latest mapper found there wasn’t actually a shipwreck in Rockland Harbor and now the area can be used for commerce!

Thanks for doing such a great job explaining this important work.

Fond memories of a family boat

I am writing in reference to the 2012 summer issue of Maine Boats, Homes & Harbors (#120), in which the following article appeared: “Requiem for a Schooner: Slow as cold molasses with idiosyncrasies galore, yet five generations gained mountains of memories that will never be erased” by Alessandro Vitelli.

I’m interested in acquiring a copy as a memory of the author, my late uncle, who passed away in early 2015. The subject of the article, the Alden schooner Niliraga, is also a much-cherished childhood memory for me.

I’ve been hunting around for photos and news of Niliraga for a few days now, and from what I’ve learned it seems she may well have been laid to rest. But I know my uncle and the family all had a very soft spot for her. Indeed, one of my own earliest childhood memories is of almost falling overboard over the transom while trying to pull the tender alongside (I was 6 at the time, I think). I believe my grandfather caught me by the ankle as I went over.

If any of your readers know about Niliraga’s whereabouts or fate, I would be most grateful.

What a great November/December issue with some of my most favorite people
in your pages—the Van Campens and Ashley Bryan! And, of course, Jock Williams!

Your feature about re-mapping the coastline (Jan/Feb 2017) reminded me of a classic Maine joke: A survey crew goes up to an old farmhouse in a remote corner of Maine, and the team leader raps on the door. When the owner comes out, he’s every bit as rugged and weather-beaten as the house itself. The chief surveyor says, “Sir, we’re from the Department of the Interior, and we’re checking the borders around here. A lot of them go back to colonial times, so we need to compare them against the GPS coordinates. Would you mind if we went out on your property with our equipment and had a look?”

“No problem,” says the old boy, “you men go right ahead.”

The next morning, the survey crew is back at the farmhouse, and the leader again raps on the door. When the old man answers, the chief surveyor says, “Sir, we’ve completed our work, and we’ve discovered something that you ought to know. It turns out that you actually live in New Hampshire!”

The old farmer took this on board and thought about it for a moment. And then he said, “You mean… no more Maine winters?!”

Four points about the last issue

1. Jib (the cover dog) is just so darned cute. I sail with dogs and it is great to see them get their place.

2.  Re: Webfoot, looks to me that the topsides are dark green.

3.  Re: Shanty Cat, I have never heard of displacement measured in inches.

4.  Great coverage on the Gulf of Maine Research Institute.

The little bird that could

Ron Joseph’s article on the transoceanic migration of blackpoll warblers is absolutely fascinating (Nov/Dec 2016). Congratulations for publishing such a fine ornithological piece. Birds are such important components of our Maine coast environment that I am delighted to see the magazine running such articles. Keep it up!