Shifting weather and ocean patterns along the coast 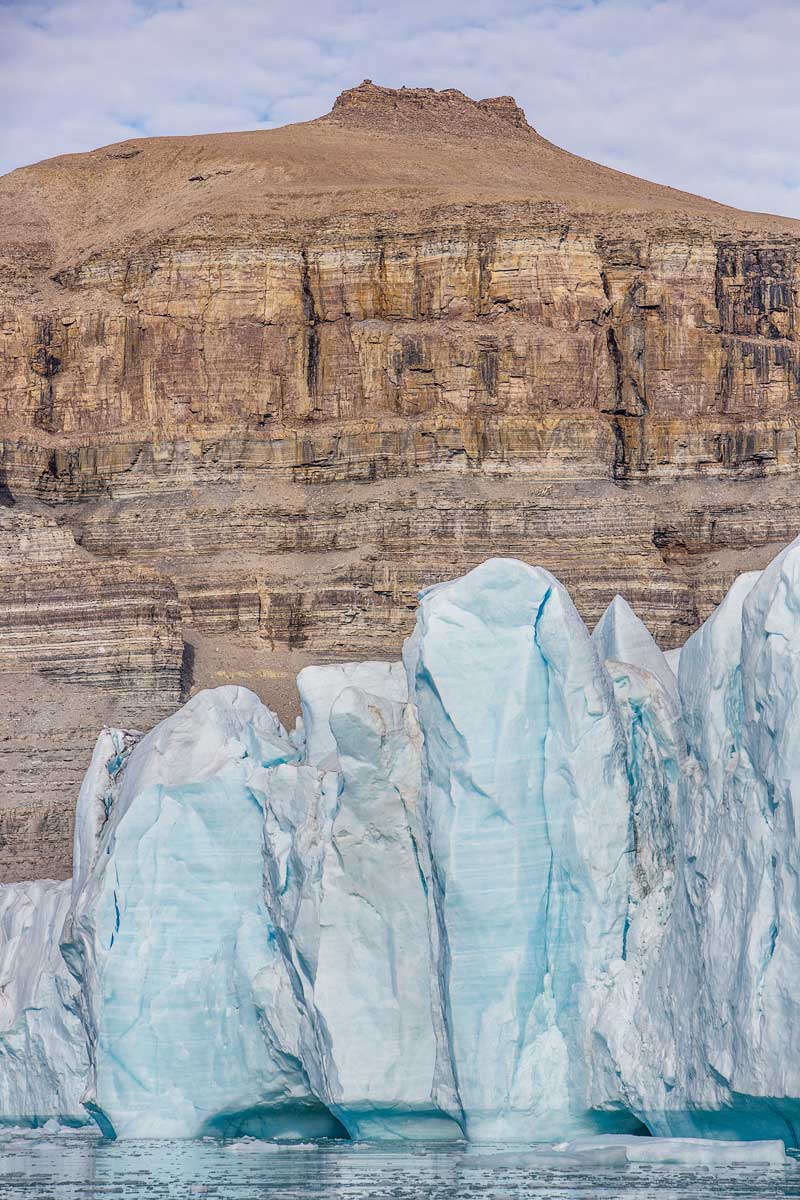 Rockport-based photographer Peter Ralston traveled to the Arctic and the Northwest Passage last summer and returned with haunting images of a landscape in flux. Shown here is a glacier face in Croker Bay off Devon Island, Nunavut. Last November, in the final official weeks of autumn, a blast of frigid air from the Arctic swept across Maine and the northern United States. The cold, which was likened to a Siberian express freight train, brought below-zero temperatures before winter had officially arrived.

The polar vortex is a counterclockwise flow that usually keeps cold air over the Arctic. When it weakens, waves of cold air spill south into Maine. It is a chilling reminder of Maine’s many connections to the great white north, connections that are being magnified and altered now in ways we can see—and feel.

The scientific studies and resulting headlines about these connections are overwhelming. When the Arctic Council met in Portland, Maine, last October, much of the discussion surrounding the meeting—the international group’s first in the United States outside of Alaska—emphasized taking advantage of the thawing Northwest Passage. This echoed ideas of exploration and competition from more than a century before, when Bowdoin College alumni Robert Peary and Donald MacMillan searched for the North Pole in Maine-built sailing vessels. In the future, instead of being the “end of the line,” Maine could instead be a “gateway,” located in a prime position to profit from new shipping routes.

At the same meeting, scientists gave presentations about rapid climate changes that are affecting thousands of people who live above the Arctic Circle. These changes—warming air and sea temperatures, melting sea ice, melting glaciers, and less snow to reflect the sun—also influence the coast of Maine. 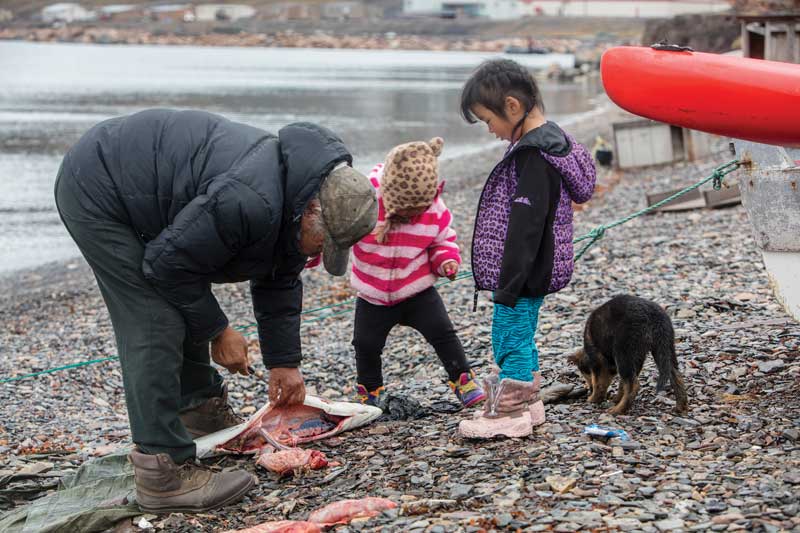 A grandfather cleans arctic char and Atlantic salmon at the village of Arctic Bay, northern Baffin Island, Nunavut. Fishermen are seeing more salmon, a symptom of the changing environment.

The polar vortex is an atmospheric connection; there are others beneath the ocean’s surface. The Labrador Current originates in the Arctic and, along with other currents, rivers, wind, and tide, impacts the oceanography of the continental shelf and the Gulf of Maine. The cold water of the Labrador Current sinks as it moves south, contributing to what is known as the Atlantic Meridional Overturning Circulation (AMOC), a sort of vacuum that sucks warm, salty water from the tropics—the Gulf Stream—up north and around the globe.

In place since the end of the last Ice Age, this ocean current system (sometimes called the “ocean conveyor belt”) has been relatively stable over the last 15,000 years. It affects our climate and every aspect of our ocean’s ecology, including a food web that supports some 500 fish species in the continental shelf ecosystem of the northeastern U.S.

These tight linkages mean that any changes in the Labrador Current impact the food web in the North Atlantic, as was illustrated during a climate-related event in the late-20th century. In 1988-1989, the year NASA scientist James Hansen told Congress that humans were responsible for an increase in global temperatures and writer Bill McKibben was making final edits to The End of Nature, Maine fishermen hauled in 12 million pounds of cod, a catch not seen in decades. More than 2,500 salmon returned to the Penobscot River, and anglers lined the banks. The endangered North Atlantic right whale continued a gradual recovery.

High above the Arctic, warming temperatures created conditions for accelerated ice melt. Meltwater has to go somewhere, and a large mass of it slid through the Canadian Archipelago into the Northwest Atlantic. Meltwater is warmer and less salty than the surrounding ocean water, and therefore less dense, so it tends to stay at the surface. This floating layer of Arctic water soaked up sunlight, allowing phytoplankton, the microscopic plant bits at the base of the ocean food web, to flourish. This growth had a ripple effect throughout the Atlantic. 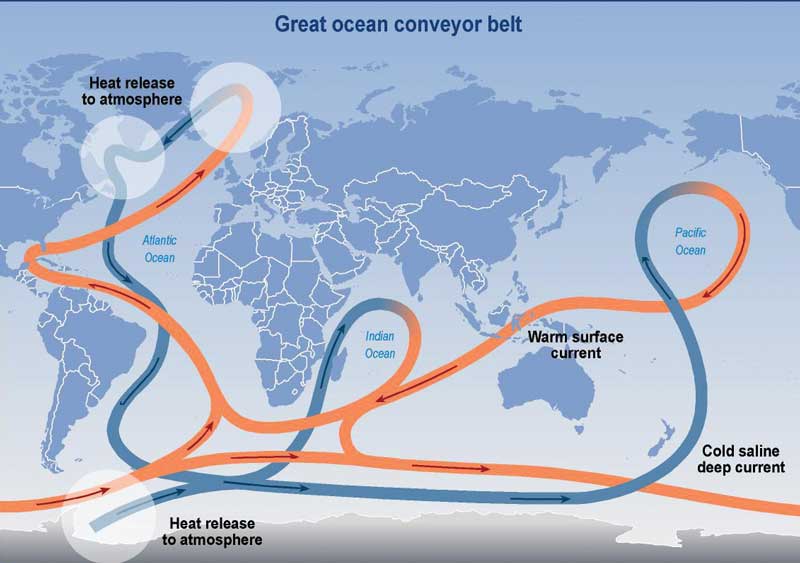 The Gulf of Maine is physically connected to the rest of the globe via the Great Ocean Conveyor Belt that transports heat around the world and affects our climate. Cold, sinking water flows south from the Arctic into the North Atlantic, where it meets the warm Gulf Stream current. Warming temperatures and melting in the Arctic has changed this circulatory pattern and affected the marine food web. Source: Intergovernmental Panel On Climate Change

As Andy Pershing, of the Gulf of Maine Research Institute, reported with fellow investigator Charles Greene in 2007, the phytoplankton supported populations of different, smaller zooplankton that were less nutritious than Calanus finmarchicus, the copepod that usually dominates our ocean.

Calanus finmarchicus are tiny, fat, red crustaceans eaten by Northern right whales and myriad small, silvery fishes, including capelin. These fish in turn are prey for larger fish like salmon and cod, and for birds and other marine mammals. With C. finmarchicus scarce, fish instead had to eat the smaller, less fatty zooplankton, which meant that they, in turn, provided less energy for predators. The decline of C. finmarchicus  in the 1990s resulted in reduced populations of Atlantic salmon, fewer right whale calves being born, and a decline in the survival of young cod in the Gulf of Maine, said Pershing. However, herring and haddock flourished during this period.

This alternative regime continued until the early 2000s, reflecting inherent oscillations in the climate system that can affect patterns of temperature, salinity, and food web for decades.

Although the fatty copepods came back and right whales recovered slightly, salmon and cod in many places did not.

Meltwater from both sea ice and shrinking glaciers and runoff from Arctic rivers swollen with increased rainfall have altered the ocean’s circulatory system. The long-term warming trend, and the rapid warming of the last 12 years, is likely related to the slowing of the AMOC, according to Pershing.

“Notably for our region, it tends to shift the Gulf Stream north and weakens the Labrador Current, making the waters off of New England warmer,” he said. “This creates a chain of events that starts with melting in Greenland and the Arctic, leads to warming in the Gulf of Maine, and results in northward shifts in fish and lobster and declines in subpolar species like cod and shrimp.”

NOAA scientists have documented such shifts in many species, including alewife, American shad, yellowtail flounder, black sea bass, red hake, butterfish, and saury. The population center of some species has already moved as far as 30 miles north.

While some, like Atlantic herring, are expanding their range, fish already at their southern limit, such as capelin and Atlantic cod, are contracting in range. Cod, haddock, and halibut are moving to deeper water where it’s colder. UMaine researcher Rick Wahle is currently trying to figure out if lobsters have also moved to greater depths.

Maine hasn’t had a shrimp fishery, which targets the sub-polar species Pandalus borealis, since 2013. Meanwhile, Greenlanders recently had their first commercial fishing season for mackerel. The mackerel have attracted bluefin tuna farther north than previously reported.

Scientists with Canada’s Department of Fisheries and Oceans have confirmed the presence of Atlantic salmon in rivers off Baffin Island, north of the Arctic Circle. For hundreds of thousands of years, sea ice blocked the movement of species between the Pacific and Atlantic sides of the globe, but no more. Pink salmon are expanding their range; Arctic and Pacific plankton have been found in the North Atlantic. Open water has created migration pathways for Pacific seabirds such as tufted puffins and ancient murrelets to visit Maine. I like to think that salmon, cod, and lobster are moving into new territory. That is, they can adapt as long as conditions do not change too quickly. 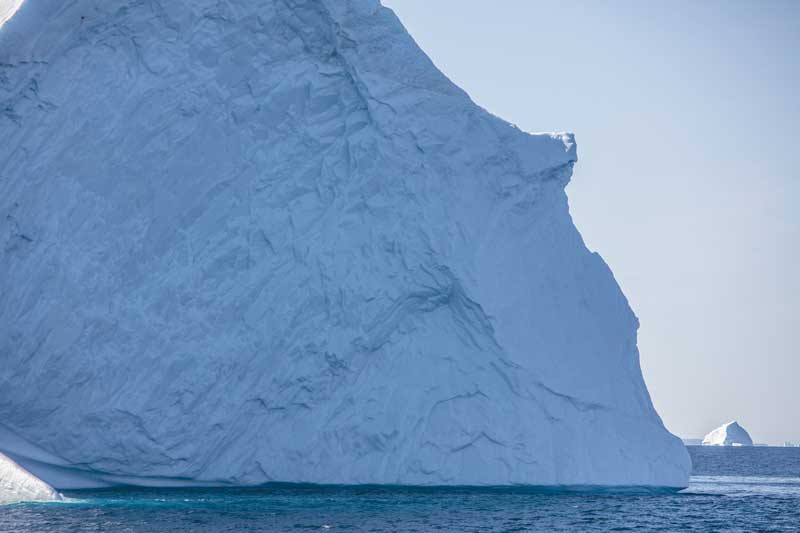 These Disko Bay icebergs were calved by the Jacobshavn Glacier, near the town of Ilulissat on the west coast of Greenland. The fastest moving glacier in the world, it is featured in the film Chasing Ice.

The Arctic is melting. With only a thin skin of ice remaining, or no ice at all in many areas, sunlight on the surface of the Arctic Ocean fuels the growth of phytoplankton. Winds blowing across the water mix layers of water and nutrients that once stayed separate under the ice, increasing the annual production of algae 47 percent in the last 20 years, according to a recent analysis by researchers at the Scripps Institute for Oceanography at the University of California San Diego. More phytoplankton and earlier blooms attract zooplankton and their predators. Meanwhile, algal productivity has declined in the Gulf of Maine, partly due to increased precipitation and freshwater flows. Is the whole food web shifting north, or only parts of it? Do we know how fast these changes will happen in the future?

The research is ongoing, and many Maine scientists are involved. But even scientists are struggling to keep up with the changes, such as the luffing of the polar vortex and its eastward movement over Eurasia.

The change in atmospheric circulation is impacting Maine’s climate, according to Maine State Climatologist Sean Birkel. As the air over the Arctic warms, there is less of a temperature difference between the North Pole and the equator. This temperature difference, or gradient, is what generates the polar vortex and the westerly winds that drive our weather.

With weaker westerly winds, blocking patterns are more likely to develop, causing heat or cold waves that can persist for days. “A blocking pattern causes heat and moisture to build up in one place, and cold and dryness in another; in between is a steep gradient. When a blocking pattern eventually breaks down, the steep gradient that developed fuels a powerful storm front that can deliver extreme rain or snowfall,” said Birkel. He noted that changes in atmospheric circulation also contribute to warmer winters with fewer below-zero days, more frequent rain, and a shorter snow season.

The lives of Arctic explorers Peary and MacMillan were bound and defined by ice. They dreamed of the brief summer period when navigation through floes was possible, and they could try again to find a way through the Northwest Passage. The Arctic, with its vast areas of thin ice and open water, and Maine, with its changing seascape, are becoming vastly different places that these historic navigators might no longer recognize.

What will stay the same is Maine’s close connection to the Arctic through today’s mariners, scientists, and artists who are documenting the changing winds and currents that define the character of our coast.

Catherine Schmitt is Communications Director for the Maine Sea Grant College Program at the University of Maine. She is the author of The President’s Salmon: Restoring the King of Fish and Its Home Waters.