A trip to former cruising grounds puts it all in perspective

Living and boating in Newburyport, Massachusetts, in the 1990s meant we were well acquainted with the reversing current of the Merrimack River and the difficulty of transiting its notoriously dangerous mouth. That we survived was the result of an occasionally painful and often embarrassing learning curve. The upside was that we became more competent and venturous and thought nothing of tackling the sea and weather for cruising to Maine, even in our tiny first boat, in which we ventured as far as Kennebunk- port and Portland for weekend stays. 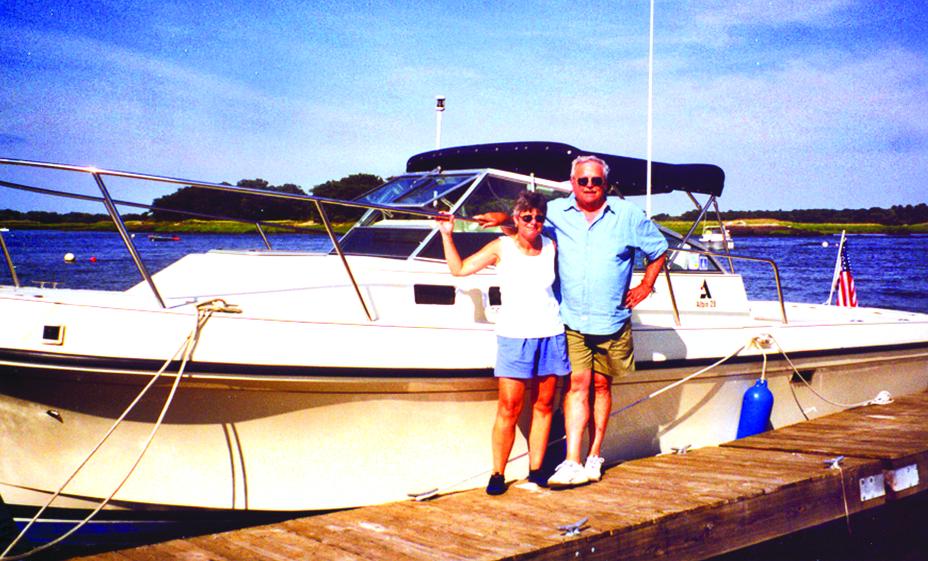 David Yetman and his wife, Pat, use their Albin 28 for day trips, as well as extended cruises along the coast. Photo courtesy David Yetman

Curmudgeon was a 22-foot walk-around with inboard/outboard propulsion and a cabin that was just big enough to accommodate a modest V-berth, a portable toilet, and a primitive alcohol stove. Sleeping on board involved moving the toilet to the helm area (which thankfully was enclosed) and putting all of our gear out in a pile in the cockpit so it could be covered with a tarp.  Food storage was a cooler. Our dining table was the engine cover. We were roughing it, and enjoying ourselves immensely.

After a few years of making do, we threw off our training wheels and bought a much larger boat, an Albin 28, also to be named Curmudgeon. We justified the purchase by how much easier, safer, and wide-ranging our Maine trips would be. It worked. We found ourselves heading downeast at every opportunity. The attraction was so strong that we finally realized that we should just admit our addiction and move to Maine.

The Boothbay area had always been a prime destination, but the marinas there had seemed discouragingly full and the waiting lists for mooring permits were long. Undaunted, we made it our target and hoped for the best. Families who contemplate relocating make finding good schools a priority. Real boaters find a place for the boat, then go house hunting. My first call was to what was then known as the Boothbay Region Boatyard on Southport Island, which forms the western shore of Boothbay Harbor. I asked the dockmaster about the chances of getting a mooring. “None,” he said. I was in the process of hanging up when he added, “…but we have a slip available.”

The check was in the mail.

We used our new slip for three weeks that year and traipsed the real estate trail on rainy days, finally deciding on a fixer-upper on Hodgdon Island, just across the bridge from mainland Boothbay. That we and the moving van departed Massachusetts to make our way to Maine on a miserable wet snowy December day only solidified our friends’ opinions on the subject of our sanity. The next spring we brought Curmudgeon up to its new dock and began our new adventure.

Newcomers to Maine are faced with the reality that no matter how integrated into the community they may become, they will always be “folks from away.” We accepted that and dove in, each in our own way. My wife, Pat, everyone’s nurse and serial volunteer, had no trouble filling her calendar with off-season responsibilities. Off-season was the defining parameter because of my threat to cruise singlehanded if she got booked up in summer.

We have never regretted our late-in-life move. Even after 12 years, we are still experiencing OMG moments on our cruises, finding new vistas in our backcountry travels, and discovering new ways to enjoy our surroundings. Whether relaxing on the deck of a favorite restaurant or sucking up the sunset from a mooring in Pulpit Harbor, we still marvel at our good fortune to be here. 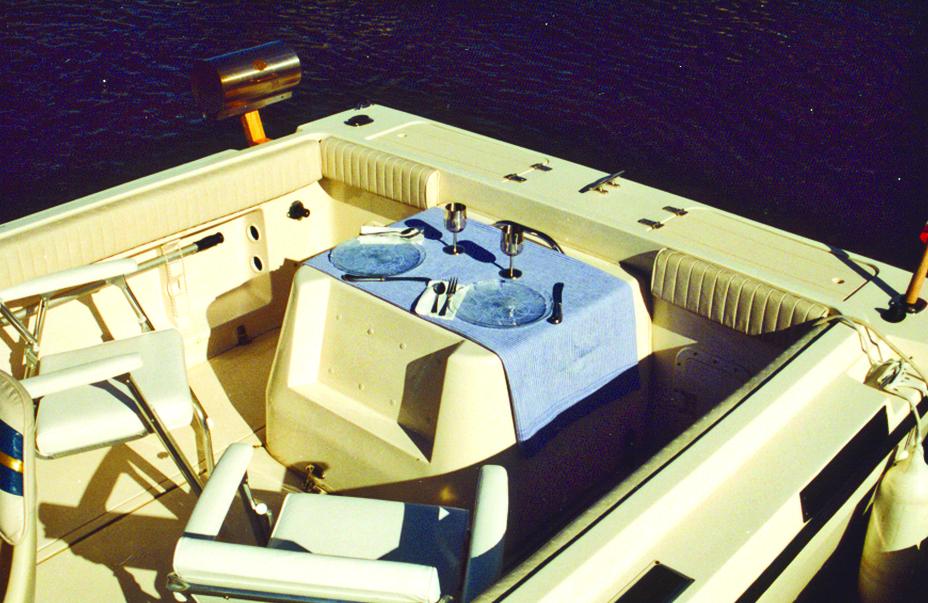 The table is set for dining in the “rough.” Photo courtesy David Yetman

A few years ago, we began talking about a voyage back to our former cruising grounds to visit some of the places like the Isles of Shoals, Rockport, Boston, and Cape Cod that we used to enjoy. We blocked off 10 days in July, and began making marina reservations and setting up times to meet friends and relatives on the boat or ashore.

The trip began auspiciously as we harbor-hopped down the coast toward our eventual destination at Provincetown. The weather was calm, and cool at night, although it got muggier as the days progressed. We spent two very warm days at the Jubilee Yacht Club in Beverly, Massachusetts. Pat’s extended family is concentrated on the North Shore, so there was no shortage of socializing while we were in port, but we began to infer from the NOAA broadcasts that there was about to be a big change in the weather.

By the end of the second day it became clear that a dash for home and safer surroundings would be in order. We woke up the next morning to stiff winds and a resounding chop. After a quick breakfast, we headed east. Rounding the tip of Cape Ann, we were pounded by the wind and six-to-eight foot waves, which made it difficult to maintain the 15- or 16-knot speed I hoped for. We made it to the shelter of Gosport Harbor at the Isle of Shoals in time for a late lunch. Then as I approached a mooring, I discovered that I had no control of the engine and was stuck in reverse. Luckily, I was able to get close enough to pick up a mooring. While Pat prepared sandwiches, I reattached the shift cable, which had come loose from the gear housing.

We called ahead to our next stop at Signal Point Marina at South Portland to ask them to wait for us as we needed fuel, a pump-out, and a berth for the night and were running late. We spent a rough night on the dock thinking about our next leg. Pat wanted to hunker down and wait out the weather. I countered that the weather was going to continue to deteriorate and I wasn’t looking forward to rainy marina life and take-out meals for a week or 10 days.

We set out the next morning on a route that would put us in the lee of as many of Casco Bay’s islands as possible before making a dash across exposed waters on the approach to Cape Small. The eight-foot seas remained with us until we turned into Sheepscot Bay, at which time the wind and an outgoing tide conspired to cause vicious 10-foot rollers. In their troughs, we had no vision of what was around us and had to rely on an erratic compass reading and a few seconds of visibility when at the peaks to try to navigate. After what seemed an eternity, we finally made it to calmer waters and were greatly relieved to see our marina.

Thinking about it later, we decided that it would have been nice to be able to complete the round trip, especially across Stellwagen Bank to Provincetown and see the whales there, but most of what we did see had a been-there-done-that feeling to it. And as nice as it was, there was no comparison to what we enjoy here at home in Maine. Yes, the locals can dispute the “home” part, but the cliché remains true—you can’t go back.

It was silly even to try.

David S. Yetman is a retired engineer who has written four books and more than 200 articles on boating themes.