“The moon is full, the autumn nights grow longer, in the north forests startled crows cry out. Still high overhead, the star river stretches, the Dipper’s handle set to southwest… Man’s life is not as the grass and trees, still the season’s changes can stir the heart.” —Wei Ying Wu, 737-792 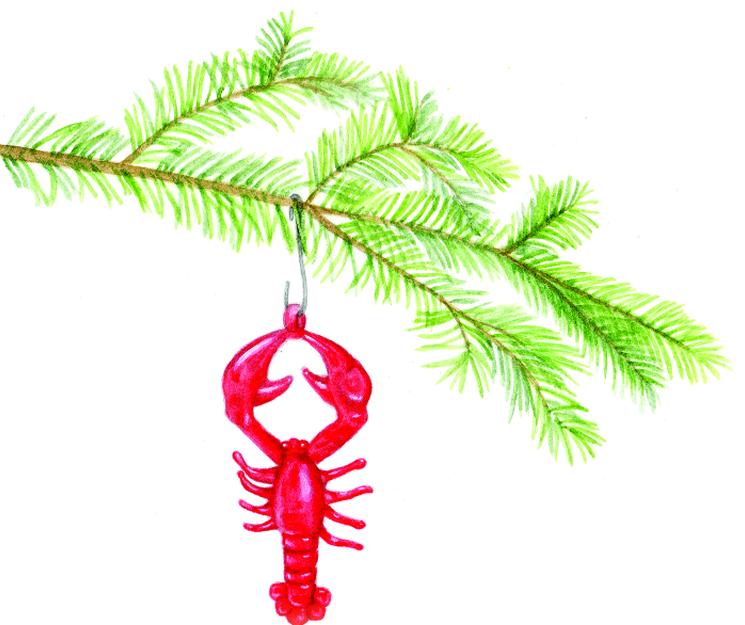 Even though it is November, there is green grass, and the population is happy thanks to warm days and only a few soft frosts. On a walk by the water we found blooming dandelion, yellow hawkweed, butter and eggs, fall aster, yarrow, Queen Anne’s lace, clover, vetch, and daisy cheering all of us late bloomers. Our forsythia out front is showing a number of shy yellow blossoms too. A few years ago at this time the midcoast got socked with high winds and about a foot of wet snow that caused heavy damage to trees and put the power out for days for many residents.

Early November is tipping season when hardy woodsmen and woodswomen head out to the vast stands of balsam fir to collect the tips of the tree branches for wreath-making. Balsam fir is loved for its dark green and fragrant needles, soft to the touch, and for its handsome conical shape and symmetry; it is the classic Christmas tree. The tips are tied into single bundles or around a pole that can be carried by two. As light and fluffy as they might seem, when bundled together, the tips can be quite heavy. Maine wreaths—handmade in factories in Hancock and Washington counties or in homes and small shops wherever the balsam grows—are sent around the country and around the world during the holiday season. There is nothing like the sight and smell of a balsam wreath arriving at your house. Some say that frosty cold nights are needed to set the needles in place or else the wreaths will start shedding too soon.

If you are out in the shady woods, be sure to look for the elusive witch-hazel Hamamelis virginiana in bloom, with tiny yellowish flowers like crinkled forsythia blossoms. The witch hazel blooms late and stays in flower after its leaves are fallen. Its medicinal uses are many.

Harbor seals are finding their way south where they will spend the winter around Long Island and the
Jersey Shore. Females are pregnant now but will not give birth until they return in the spring. Our whales—humpbacks, finbacks, minkes, and right whales—including pregnant females, also migrate to warmer waters, traveling as far as Georgia and Florida. 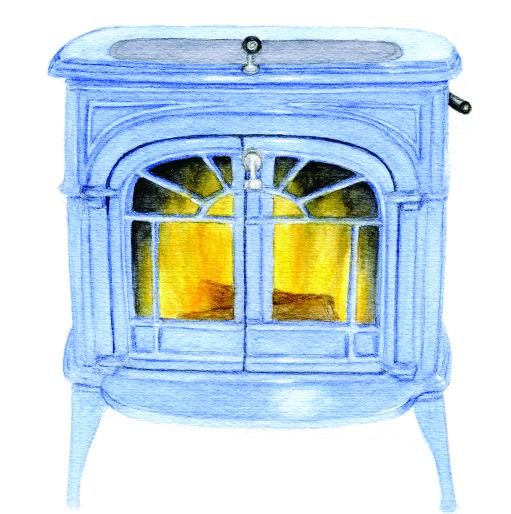 Illustration by Candice Hutchison Mainers know how to prepare for winter, inside and out. Outside, the woodpile is under cover, the storm windows are in place, maybe banking is packed around the foundation to keep the cold winds out, and if the lord of the manor is retired with time on his hands there may even be little markers set along the driveway for the plowman, and little shelters built over the shrubs to protect them from snow and ice. The snow shovel rests just outside the door. Inside, there is weather-stripping around windows and doors, there is insulation wherever we can stuff it, there are woodstoves and furnaces, quilts on the bed, and plenty of warm clothing in the closet.

That takes care of the house, but the heart, too, needs to be prepared for winter. We may see less of friends and more of family during the cold months. We may feel cooped up and need to remember to get out. We may be aware that some of our neighbors need help. While we give thanks, we can also give help by supporting our local food pantry, thrift shop, soup kitchen, or wood-bank. There are holiday gift programs for children in most of our towns. Like splitting wood, helping warms twice: the one who gives and the one who receives.

Things are getting darker where your commentator lives, on the east side of Moose Island at 44 degrees, 55 minutes, and 14 seconds north latitude, just short of halfway to the North Pole. At this time of year in eastern Maine, the length of the day is about nine hours and five minutes. In days of yore, winter-bound folks would sew, knit, mend harnesses, sharpen tools, talk to each other, write and read. Reading and writing were probably the favorite indoor occupations in winter. Think of Sequoyah laboring on his Cherokee alphabet, or Abraham Lincoln studying by the fire, or Thoreau in his chilly cabin reading by candlelight, or Laura Ingalls Wilder writing by her oil lamp in the Big Woods.

Books are a small window into an imaginary world and require more of the reader’s imagination, which must supply both sounds and sights. Regular exercise of the imagination encourages fantasy, inspiration and invention, thinking outside the box, even visions of a new and better world. And “Where there is no vision,” as reads the ancient Book of Proverbs, “the people perish.” If vision is born in quiet and darkness, what happens when the noise never stops and the lights never go out?

That bright red berry you see tucked into window boxes among the green fir boughs or growing in wet places alongside the road is winterberry (Ilex verticillata), also known as Canada holly or fever bush. It is native to New England and the Maritimes and is related to the familiar English holly, though winterberry has smooth leaves that it loses in the fall. Winterberry provides a much-needed food supply to many species of birds during the cold. I have seen flocks of robins feeding jubilantly on winterberry—maybe even getting a little tipsy—during the cold, dark months when there is little else to eat; the quiet hillside is filled with their joyful chirping.

Since Christmas marks a time when the weary world was touched by the holy, there are any number of ancient stories about how animals miraculously gain the power of speech on Christmas Eve, like the tale of “The Friendly Beasts,” in which the stable animals gathered around the manger, each bearing a gift for the child. I have a fairly good imagination, but I can’t recall the animals on Christmas Eve ever saying anything I could quite understand. Unless that beautiful red-crested cardinal which came and pecked on the window that special night was saying, “Hey, how about refilling those bird feeders?!”

Inside, we gather around the lighted tree with its bright ornaments hanging among the branches. Here is one scratched on birch bark years ago by the elderly father of a dear friend that reads, “Love is the greatest gift we can give each other.” Over here is another one just like it. Maybe he forgot that we already had one, or more likely he was so overflowing with love that he wanted to say it again and again. Here is a heart made of beeswax by someone who was part of our wider family circle for a time but sadly drifted away. Here is one made of beads, a tiny quahog shell, a feather and colored string, made by another who was once part of the family and still is, but now far away. Here is a caroling angel I snipped out of aluminum flashing when the children were young and we had little money. Here is a yellow snowman (hmmmm… yellow snow?) made by one of the grandkids who is now a mature teenager and would probably be embarrassed that we still have it. Here is an ornament we received last year, and here is one we have hung every year for almost half a century. Our fragrant, wild-cut tree is trimmed with decorations from far and wide and long ago, family and friends, the living and the dead, and all just passing through.

As memories of three score and ten Christmases pass through the heart, it’s no wonder that the throat gets a little tight and the eyes well with tears at the sparkling sight and sweet smell of that Tree of Life by the window.

A tiny weather-bent fir tree grows in a crack of the rock near the summit of the mountain, reflected in an ancient puddle nearby. Its trunk is gently curved. Its branches and needles are stunted. Who knows how many years it has drawn such sparse nourishment from the stingy rock. Yet there it stands, year after year, through winter, spring, summer and fall, through Solstice, Chanukah, Christmas, Kwanzaa, Ramadan, the evergreen embodiment of life, through all hardship, waiting for the light.

“People are like stained-glass windows. They sparkle and shine when the sun is out, but when darkness sets in, their true beauty is revealed only if there is a light from within.”

Rob McCall lives way downeast on Moose Island. This almanack is excerpted from his weekly radio show, which can be heard on WERU FM (89.9 in Blue Hill, 99.9 in Bangor) and streamed live via www.weru.org. Email Rob at awanadjoalmanack@gmail.com.