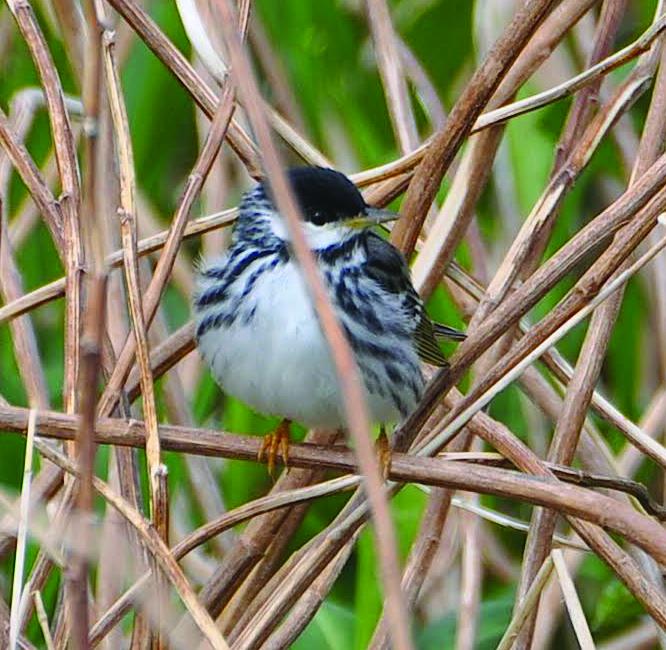 Photo courtesy Dr. Rebecca Holberton Captain Walt Gebert was piloting a cargo ship 50 miles west of Bermuda in September 2010 when the seasoned sailor witnessed a spectacle seen by very few. During a tropical storm, hundreds of exhausted songbirds, including chickadee-sized blackpoll warblers, landed on his ship’s deck and railings.

It was a migrant “fallout”—a biological phenomenon whereby hundreds of migrating birds fall from the sky in search of protective cover. Unlike the inland migration patterns of most land birds, blackpoll warblers fly high above the open ocean as they travel nonstop from Maine to Venezuela. This 80- to 90-hour transoceanic flight is one of the most remarkable journeys undertaken in the animal kingdom. But as Gebert learned, storms and hurricanes can force the birds to make emergency landings.

At the time of Gebert’s sighting, Dr. Rebecca Holberton, a researcher at the University of Maine, was monitoring the hurricane and the blackpoll’s migration on Clemson University’s radar ornithology web site. She had a vested interest in the blackpolls’ flight. Several birds on Gebert’s ship might have been ones that she had handled and studied a few days earlier on a coastal Maine island. 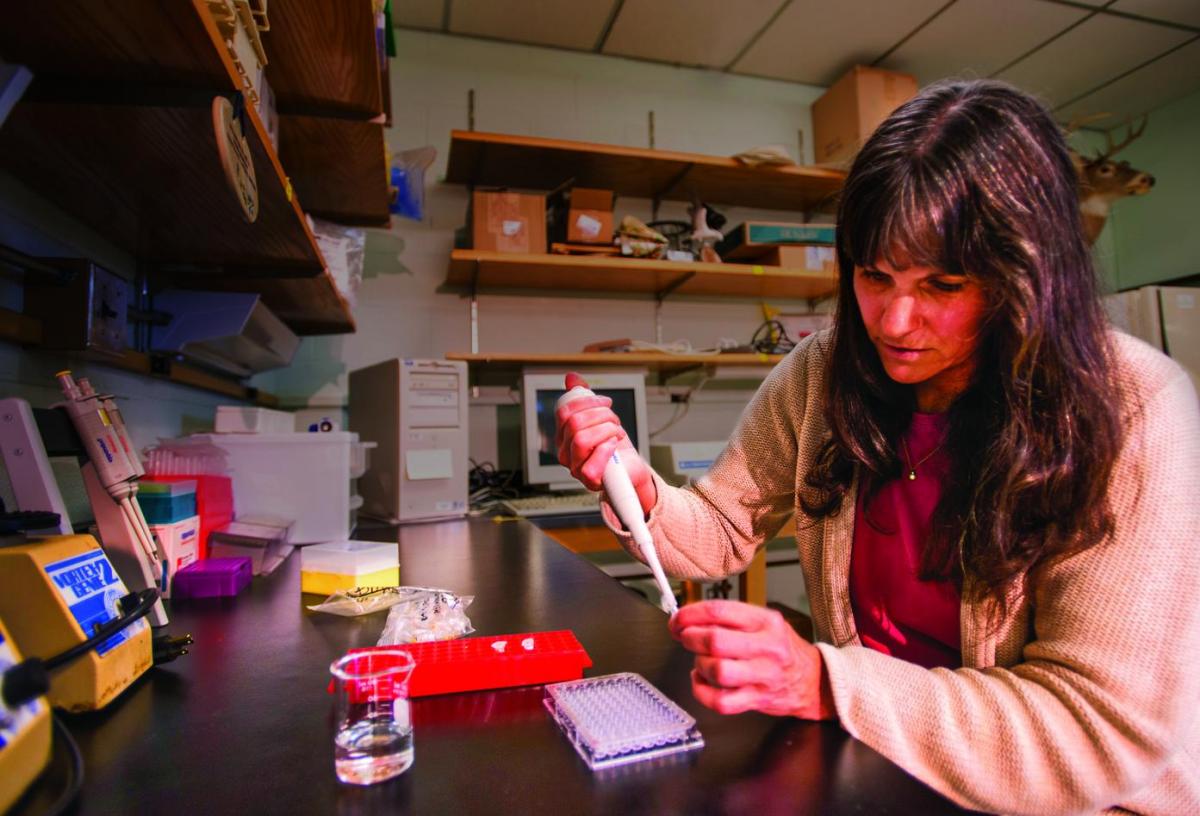 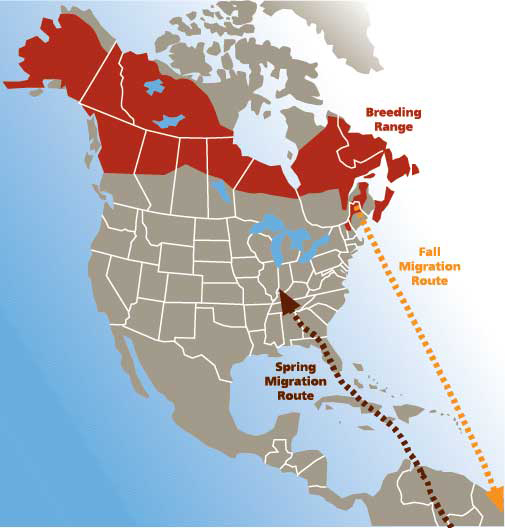 Migration routes and summer breeding range of the blackpoll warbler. Illustration courtesy University of Maine One of the country’s leading avian physiologists, Holberton has spent a career unraveling the mystery of the blackpoll’s autumn migration—one that spans 2,000 miles at a height of 12,000 feet.

Her research has yielded significant clues to understanding the blackpoll’s astonishing migration. “From mid-September until mid-October, blackpolls double their number of oxygen-rich red blood cells. It’s a strategy that enables them to efficiently metabolize fats at 12,000 feet where oxygen is limited,” said Holberton.

Bird watchers have long suspected that blackpolls fly nonstop each fall from Maine to South America because individuals are conspicuously absent in bird banding stations along the Atlantic Flyway, she explained.

Several years ago, she and colleague Chris Rimmer of the Vermont Center for Eco-Studies set out to better understand the blackpoll’s migration. Rimmer captured 38 blackpolls in mist-nets in the Canadian Maritimes and fitted each bird with a tiny device called a geo-locator. Microchips in the geo-locators, which were attached to the birds’ backs, recorded the warblers’ eight-month flight patterns. In the fall, these warblers migrated south over the Atlantic Ocean, spent the winter in the tropics, and returned in May to their New England breeding grounds. “A 2,000 mile nonstop flight requires an enormous amount of fuel,” said Rimmer. “Blackpolls have the energetic wherewithal to accomplish the feat.” 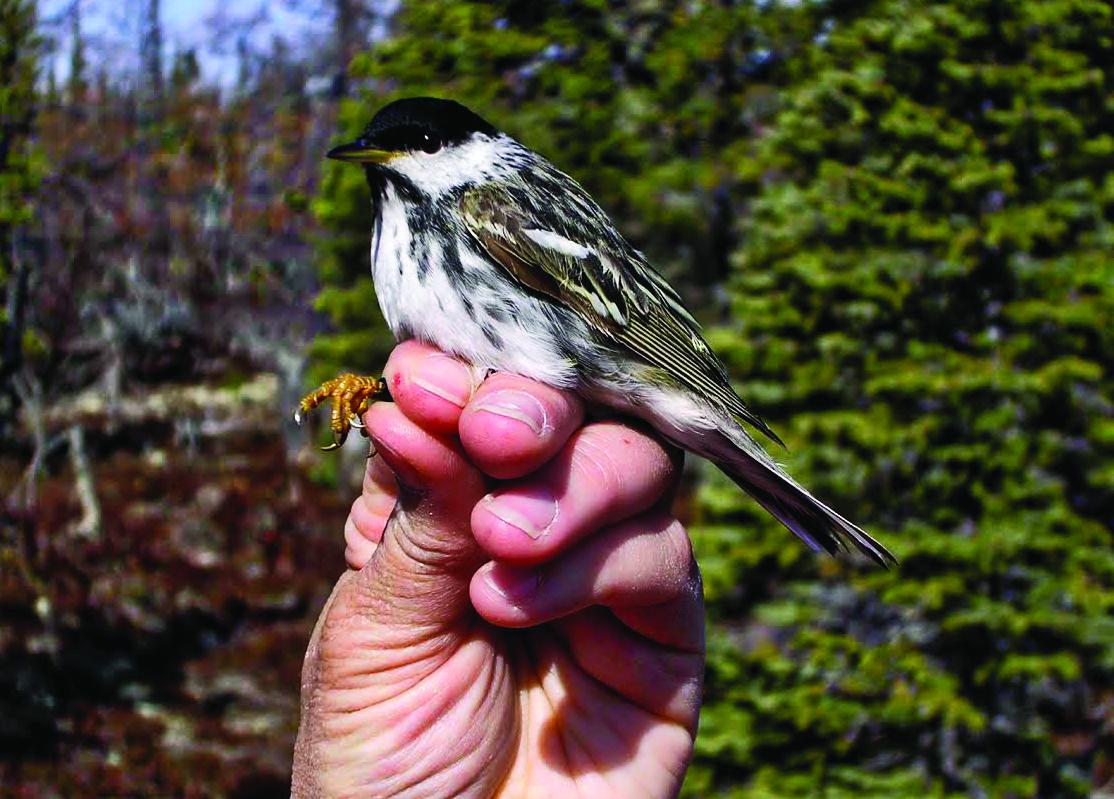 Blackpoll warblers are extraordinary long-distance migrants. The chickadee-size birds depart the Maine coast in late September and fly nonstop over the Atlantic Ocean to South America. The feat is accomplished in 80 to 90 hours. Photo courtesy Dr. Rebecca Holberton Each September, Holberton and her students collect blood samples from blackpolls captured in mist-nets at migrant staging areas along Maine’s coast. This research has yielded a second significant discovery. “Blackpolls use steroids,” Holberton said with a laugh. “Steroids help the birds bulk up prior to their long-distance flight.”

However, unlike artificial steroids used by cheating athletes, the blackpoll’s steroid is secreted by its own adrenal gland. Known as corticosterone, the hormonal steroid triggers liver enzymes that convert food, primarily insects, into body fat. It enables blackpolls to double, and sometimes triple, their body weight in 72 hours. Blackpolls typically weigh 12 grams, approximately the equivalent of two nickels. Then in September, “the birds feed like hogs and sheath themselves from head to tail in thick layers of subcutaneous fat,” Holberton explained. “I’ve handled fall blackpolls that weighed 32 grams.”

Her microscope has also revealed another migration secret: in the fall blackpoll warblers ramp up production of hemoglobin. Most animals suffer altitude sickness from prolonged exercise at elevations of 12,000 feet. The birds studied by Holberton appear to avoid this malady by carrying extra hemoglobin and oxygen-rich red blood cells in their blood stream. This evolutionary adaptation allows blackpolls to maintain a high metabolism during their long flight two miles above earth.

Like anxious Boston marathon runners making final preparations for the long-distance event, blackpolls are jittery for days leading up to autumn’s grueling flight from the Maine coast. Their “starting gun” is a cold front moving west to east on the heels of a low front moving offshore. September and October cold fronts deliver strong, northwesterly winds that blackpolls ride a southeasterly direction for 36 hours until they reach Bermuda. At that point, intercepting northeasterly trade winds turn them southwest toward South America. After touching down in Venezuela, many blackpolls will winter there. Others feed and rest for several days before winging their way south to winter in the Amazon Basin of Brazil. 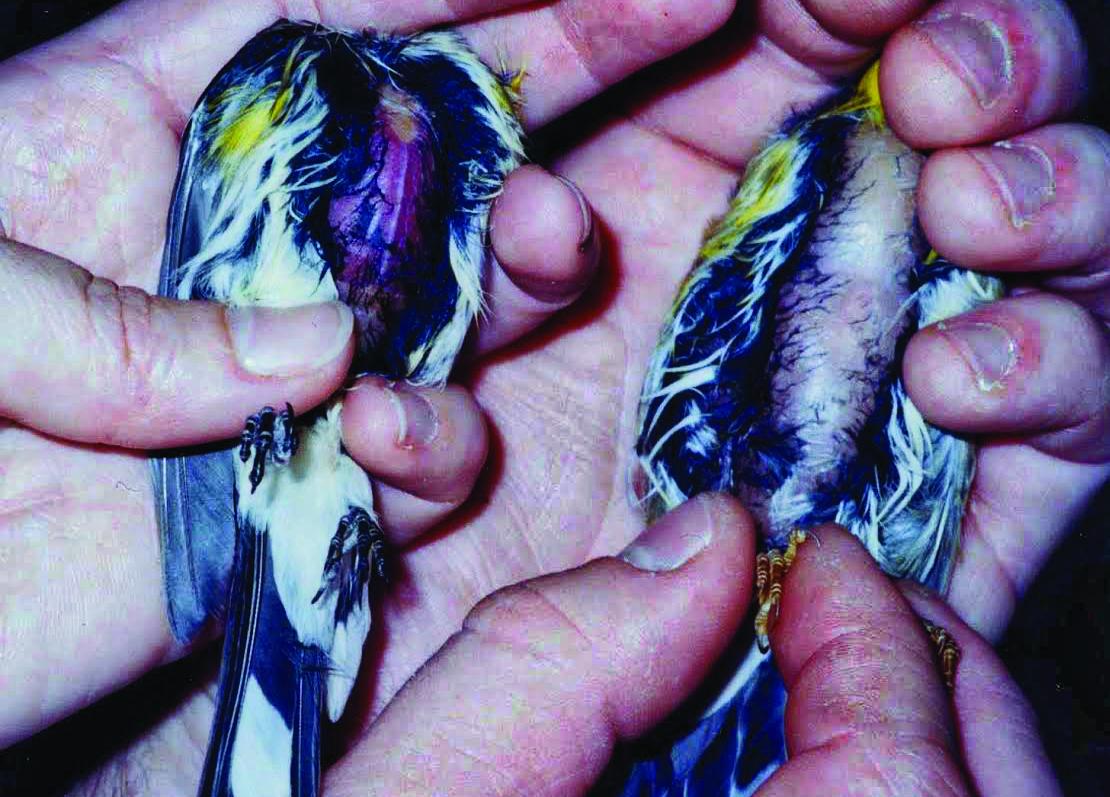 The bird on the left is a short-distance migrant that stops daily to rest and feed. It carries little fat. The “butterball” long-distance migrant bird on the right is a blackpoll warbler sheathed in fat—an adaptation to fuel the 2,000-mile nonstop flight. Photo courtesy Dr. Rebecca Holberton

“When fall migrant blackpolls have adequate fat reserves, they’re airborne. Once they commit to flying, they’re stuck,” said Holberton. “There’s no turning back. Their transoceanic flight is a giant leap of faith.” Since the early 1990s, an alarming number of blackpolls has not survived the journey. Once one of our most common warblers, blackpoll populations have undergone a 70- to 90-percent decline in the past 10 to 15 years, according to Holberton.

Climate change is increasing the frequency and duration of hurricanes in September and October when the birds migrate out over the open ocean. This, combined with deforestation in the winter breeding grounds, is seriously impacting blackpolls.

For the lucky ones who make landfall in South America, their three-day journey will have averaged 650 miles per day at speeds of 25 to 30 mph.  “A colleague analyzed the bird’s energy efficiency and concluded that what they’re able to achieve is equivalent to an automobile averaging 750 miles per gallon,” said Holberton. “They’re truly amazing animals.”

Of Maine’s 212 breeding bird species, two seabirds are also renowned for traveling great distances. Arctic terns depart Maine’s uninhabited coastal islands in August, fly across the Atlantic and then south along the west coast of Africa before wintering in Antarctica—an average annual round trip of 55,000 miles. Manx shearwaters, a pelagic species that nests on Maine’s Matinicus Rock, spend Thanksgiving to Easter cruising the oceans off the coasts of southern Brazil and Argentina, more than 7,000 miles from Maine. However, unlike seabirds that can land on saltwater to rest, blackpolls are land birds that inhabit boreal forests. In some years, most blackpolls succeed in reaching Venezuela without stopping. Of those who can’t complete the flight, many die in the ocean, and a small percentage seek temporary safety on ships like Gebert’s.

“For my sailing crew, it’s gratifying to know that our ship provides a little refuge for a little bird,” he said.

Freelance writer Ron Joseph is a retired Maine wildlife biologist. His articles have appeared in this publication, Down East Magazine, and various Maine newspapers.