If you (un)build it, the fish will return

Between the head of tide above Bangor to where it widens into the bay at Searsport, the Penobscot River shifts from a flowing freshwater waterway banked by cedar and pine to a brackish, wave-lapped marsh with a rocky shoreline. In this estuary, salt concentrations fluctuate as the winds and tides push sea water and sediments back and forth.

The estuary and the river that feeds it have taken on a new character recently, and have become an international example of watershed restoration. 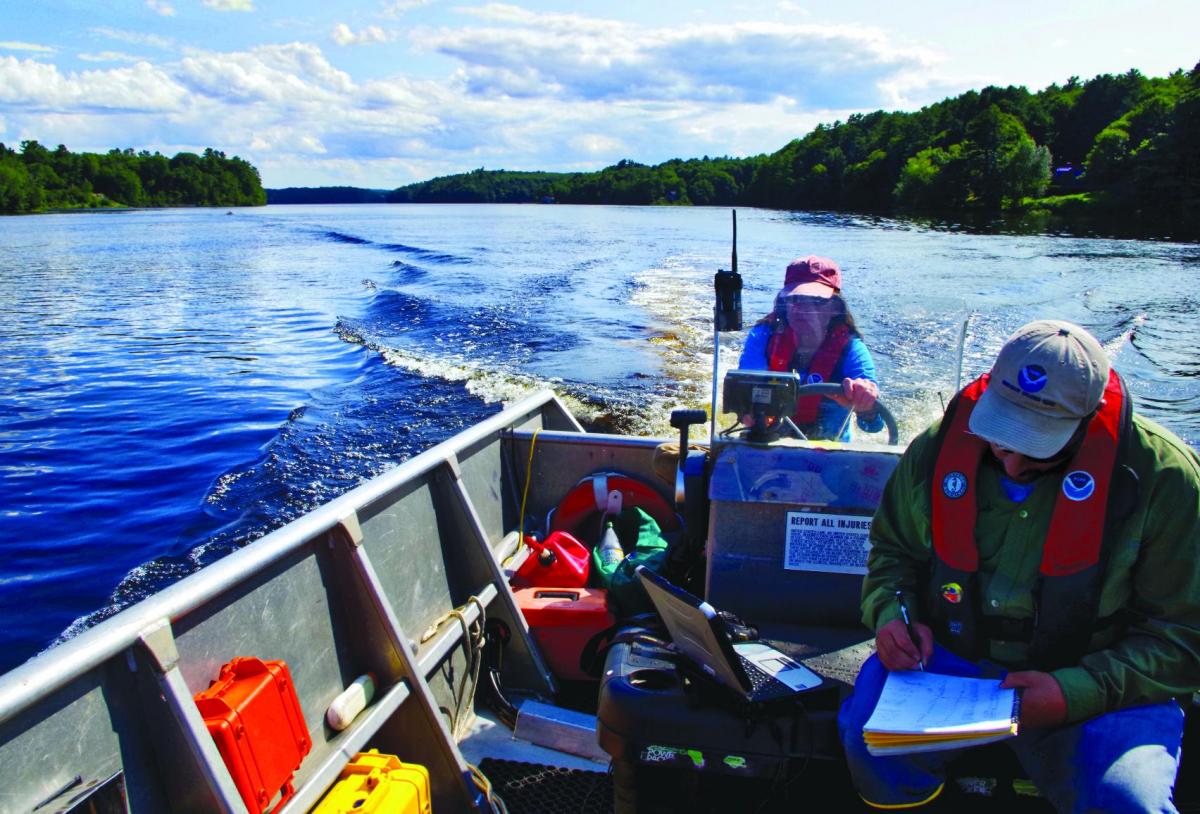 Despite two centuries of intensive timber harvesting and pulp and paper manufacturing, and the construction of hundreds of dams related to those industries, the Penobscot has fared better than most New England rivers over the years, which helps explain why the river has received so much attention. Though still recovering from years of abuse, the Penobscot has potential. Compared to other waterways of a similar size, the Penobscot has fewer dams, better water quality, and—most important to fish biologists—it is one of the few New England rivers that still hosts all 12 species of native sea-run or migratory fish, including the largest remaining run of Atlantic salmon in America.

The Great Works Dam was removed in 2012 and the Veazie Dam in 2013. In the summer of 2016, engineers completed a bypass channel around the Howland Dam on the Piscataquis River, a major tributary.

With improved access to thousands of miles of habitat, the big question was whether the fish populations would rebound. Now, the initial post-dam-removal results are coming in. Overall, scientists are documenting a massive increase in populations of river herring. Significant numbers of sea lamprey and sturgeon also have been found in the river. In addition, the studies have resulted in a few surprises, including new previously unexpected information about the lifecyles of certain river fish species.

Now a full-fledged research scientist, she is ready to build on the knowledge of those who came before.

Based on her studies of fish in the Penobscot estuary she, her research partners, and students are finding that what have been considered “facts” are not necessarily fundamental truths. “Students are finding that their assumptions, based on previous research and observations, are in need of updating as newer techniques allow a more detailed look at fish behavior,” said Wilson.

Wilson studies alewives and blueback herring, small members of the herring family that live in the ocean and breed in fresh water. Interest in Maine river herring has been high because of their commercial importance to the lobster bait fishery and declines in abundance that prompted consideration for Endangered Species Act listing.

Alewives are easy to move around and “stock”—adult alewives returning to spawn can be placed in a new pond in May, and their young will imprint on their new home as they grow throughout the summer. Along with improvements in fish passage (ladders, unrestricted bridges and culverts, etc.), stocking occurred at Chemo, Pushaw, and Davis ponds, Mattamiscontis Lake, and six additional ponds in the Penobscot tributary.

After migrating upriver—alewives in April and May to lakes and bluebacks in May and June to rivers—the fish (collectively known as river herring) mate, lay eggs, and then either die or go back to the ocean according to widely accepted textbooks.

But the recent research has found a more nuanced reality. 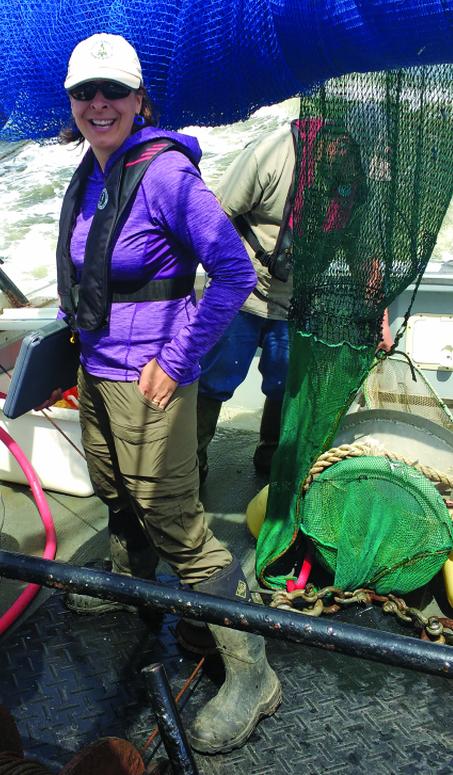 Karen Wilson, fisheries biologist and faculty member at the University of Southern Maine, studies alewives and blueback herring, aboard a research vessel in the Penobscot. Photo by Matthew Duff In the case of river herring, it appeared that juveniles might stay closer to shore, or move back and forth between salt and fresh waters. Intrigued, Wilson secured funding from Maine Sea Grant to study the early lives of alewives and blueback herring in the Penobscot, its estuary, and the bay.

In one study, student Molly Payne Wynne focused on blueback herring, analyzing otoliths (ear bones), which record minute changes in chemistry from fresh water to salt water. The results showed that adult fish returning to the same tributary had similar patterns in freshwater and marine habitat use, but each tributary differed from the next, with fish from some tributaries heading directly to the ocean, and those from other streams spending more time in fresh water or even the estuary.

Payne Wynne graduated and went on to coordinate science and monitoring for the Penobscot River Restoration Trust. She now works with The Nature Conservancy in Maine. Graduate student Greg LaBonte continued the work on river herring otoliths, and found that growth rates of fish were similar in the different environments. As a place for young fish to eat and get bigger, the estuary appeared to be equal to the bay. Larger fish tended to go farther into the bay, but some came back into the estuary.

Meanwhile, biologists from the National Marine Fisheries Service (NMFS) have been monitoring the Penobscot estuary fish community. Helped by Islesboro fisherman Josh Conover and his boat, the 38-foot Odd Ball, NMFS scientist Justin Stevens trawls for fish from Hampden to Stockton Springs, every month from May to October. He uses echo sounders, devices similar to recreational depth finders, to estimate fish density. The more recent underwater surveys reveal a lot more fish biomass overall, including more fish in more places compared to when the survey began in 2012.

“We were surprised to see juvenile river herring in the estuary every time we looked,” said Stevens.

Why are juveniles spending so much time in the estuary? The answer appears to be simple: food.

Amy Webb, another graduate student working with Karen Wilson, analyzed the diets of hundreds of river herring in the estuary, and found they were eating copepods, mysid shrimp, and barnacle larvae. Many fish were coming in from the bay to feed in the estuary. “In just a few years, we have observed a noticeable decline in zooplankton abundance that we think is most likely due to river herring predation,” said Rachel Lasley-Rasher, of the University of Maine’s Darling Marine Center, who is also working with Wilson and the NOAA team on the estuary survey.

“No one thought they [the herring] were hanging out in the estuary,” said Wilson. “The estuary is a significant feeding area for these fish. They are staying there longer than people thought, moving back and forth, yet we don’t always think of the estuary as critical habitat.”

The numbers of river herring in the Penobscot have gone from a few thousand fish to more than one million in just two years.

Everyone who studies the Penobscot River has seen changes since the dam removals. While alewives have been helped through stocking efforts, other fish have appeared on their own.

The NOAA survey detected rainbow smelt, and dense schools of juvenile Atlantic herring in the lower estuary during the summer. Where impoundments have reverted to free-flowing current, river fishes like blueback herring, eel, and sea lamprey have replaced slackwater fishes like golden shiner and smallmouth bass.

Researchers found more than 1,000 shortnose and Atlantic sturgeon living in the Penobscot, and witnessed them move up into the restored river reaches after dam removal. In the summer of 2016, three sturgeon showed up in the elevator at the Milford Dam, now the first major barrier to fish migrating upstream from the sea.

The population of American shad, once assumed to be a “remnant” of a few hundred fish, is much larger. In 2016, more than 7,000 adult shad returned to the Penobscot, and juveniles are routinely captured in the estuary.

There are faint signs that groundfish—monkfish, silver hake, and cod—are eating river herring as they migrate in and out of the Penobscot.

Wilson has witnessed the change first-hand. She grew up in Old Town and spent summers on Isle au Haut, sailing around Penobscot Bay. She remembers when Atlantic herring were still running, and white-sided dolphins and whales swam into the bay, and even that was nothing compared to how things must have been 100 to 200 years ago. Now, she sees hints of life coming back.

“As you go up the estuary now, there’s osprey, seals, harbor porpoise as far as Winterport. There’s a lot of activity, and we’d expect that to grow over time. It’s really kind of bringing back that base of the food web that’s been gone for so long,” Wilson said.

People, too, are benefiting from the expanded food web. Lobstermen prize alewives and blueback herring for fresh bait when lobster fishing intensifies in spring. Fishermen who want to harvest cod and haddock near Penobscot Bay are waiting, watching to see if more groundfish are attracted to the new populations of prey.

The rapid return of multiple species of fish to the Penobscot after dam removal confirms that if you (un)build it, the fish will come. It’s almost as if the fish were all there, waiting, knowing they were about to get a chance to move upstream. As the results from pre- and post-dam removal studies pile up, scientists and resource managers are turning their focus to the remaining barriers. Thousands of misplaced and undersized culverts and hundreds of small dams continue to clog the arteries of the Penobscot watershed. The race is on to install “stream smart” road crossings, build fishways, construct rock-ramps at dams, and remove aging infrastructure in order to give fish the best possible route to survival. In addition to helping fish, these actions also improve water quality and reduce storm damage and flooding.

Beneath the surface, the Penobscot has undergone a somewhat sudden transformation. The river is full of fish, schools of them moving upstream and down in all seasons of the year. And these fish are behaving in ways scientists would not have predicted. The full implications have yet to reveal themselves. When they do, scientists like Karen Wilson and Justin Stevens, and their students, will
be there, ready to document nature’s capacity for surprise.

Catherine Schmitt is Communications Director for the Maine Sea Grant College Program at the University of Maine. She is the author of The President’s Salmon: Restoring the King of Fish and Its Home Waters, published in 2015 by Down East Books.

While other fish species in the Penobscot are on the rebound, the story is not so clear for the river’s most famous fish, the Atlantic salmon. The species remains critically endangered. In 2015, only about 730 salmon returned to the Penobscot River; fewer than that in 2016. Remaining dams on the river continue to harm and kill salmon, especially on the downstream migration.

For salmon populations here at the southern edge of their range, “a lot depends on the marine environment, and unfortunately, salmon face some pretty big challenges in the ocean right now,” said Rory Saunders, a biologist with NOAA’s National Marine Fisheries Service. Those challenges include changes in ocean circulation, salinity, and temperature that are altering the entire food web of the North Atlantic, likely affecting salmon as well as cod and Atlantic puffins.

NOAA and the U.S. Fish and Wildlife Service share responsibility for endangered species; NOAA monitors salmon in the estuary, bay, and ocean, while the USFWS maintains the genetic heritage of Penobscot salmon at the Craig Brook National Fish Hatchery. The work is focused on preventing extinction because it’s much harder to bring back an extinct population than to preserve an existing one.

Those watching the return of fish to the Penobscot remain hopeful for salmon, too. They have all but disappeared and come back before, demonstrating their resilience, and the presence of other sea-run species indicates that the river is hospitable. Future work to improve water quality and connect natural stream channels will further restore the ecosystem. The future for salmon remains uncertain, but the welcome mat is out.  —Catherine Schmitt