Chowder with a view

We so enjoyed David Satter’s letter “Maine Memories” from your Sept/Oct 2016 issue. I was also fortunate to grow up summering in Maine (York Beach) in a cottage owned by our family for 75 years. His description of driving there was very similar to our experience.

In the early years, our car had no air conditioning. My parents in the front seat would suffer through an hour and a half of “Are we almost there?” and the squabbling of three girls in the back seat. Occasionally the “long arm of the law” would reach back and make a clean sweep. If that didn’t work, there was the next directive: “Sit on your hands.”

We now live in Portsmouth, NH, a stone’s throw from the restaurant that David remembers on Hunking Street. It has been in business for 51 years, and is called Geno’s Chowder & Sandwich Shop. Although Evelyn, whom he remembers as the old lady with the “cool” language, no longer runs the business, her daughter Francesca continues turning out homemade chowder, lobster rolls, and homemade blueberry pie among many other choices. So David, on your next trip downeast, stop in and see Francesca—sitting on that deck overlooking the Back Channel can’t be beat!

We look forward to each and every issue of Maine Boats, Homes & Harbors.

You might be interested in knowing more about the Cape Cruiser on your July/August 2016 cover. During 2007 and 2008, some employees at C-Dory boats somehow, perhaps surreptitiously, began building boats that they called “Cape Cruisers” using the tools and the shop owned by the company that owned the C-Dory brand. They were later sued for non-compete, copyright infringement and other charges, losing in court. Today those molds are owned by NW Marine Industries in Bellingham, WA, and are being built as the C-Dory Venture series.

The C-Dory brand suffered through tough times and multiple owners during the last recession and then survived a devastating factory fire not long ago. It would be great for them to get credit where credit is due, so I want your readers to know that the boat pictured on your cover is available today as a C-Dory.

In full disclosure, I own a 2009
C-Dory Tomcat in which I have cruised extensively from Canada to Florida. It’s a great boat and reflects many of the same attributes that Joe Upton pointed out in his excellent article.

Thank you for your great article on the 24 Ostkust (Off The Drawing Board, Sept/Oct 2016). It brought back memories of a boat my father and I restored in the mid 1970s. In fact all the lines were exactly the same except the rudder was positioned at the aft end of the keel.

The portholes, the side coatings and the mast configuration were all exactly the same including the curve as the coamings reach for the aft deck. We had to rebuild the stem and cabin top and replace the garboards. I then sailed this boat all over Vineyard and Nantucket Sound. We had no history on the boat, but anecdotally knew it as a 1959 Coquette Sloop built in Holland. Now that I see the design you write about, it brings some clarity to this beloved vessel and certainly brought back some great memories.

It was sold on Cape Cod when I moved to Florida and wisely chose not to maintain it in the Florida waters.

Thanks for the good memories of a father-son project!

Art Paine’s wonderful article (great cover photo too!) on the Ostkust class of sloops is a valuable addition to the written record of important and lovely boats. Like Art, I have admired the Ostkust since childhood and in recent years have looked closely at the ones I see occasionally in Eggemoggin Reach. The aesthetics of these boats both in hull form and on deck is magnificent. In addition to being inspired by folkboats, designer Al Mason may have drawn inspiration from Herreshoff’s great 12½ and Fish class designs. If I wanted the next size up from our beloved Fish class Perch, I might well choose an Ostkust.

Such a pretty yacht 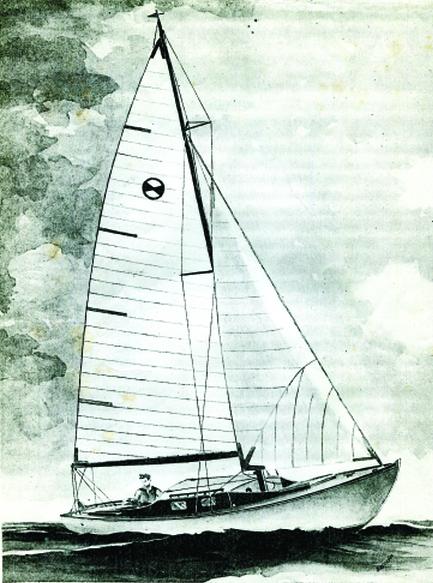 I was amazed to see a photo of my first sailing boat, the Ostkust, featured in your magazine, which is always so enjoyable to read.

I lived in Australia in 1978 when I bought my Ostkust, which had been built by Andrew McMahan in Sydney. I was sailing in the harbor there when a fellow yachter called out, “Hey, pretty yacht. I have a picture somewhere I must give you.” To my amazement, when I met him at the Middle Harbor Yacht Club, he gave me the magazine Rudder dated 1948. How does anyone remember the contents of a magazine 30 years later? Sure enough, the Ostkust was featured.

I still have this copy of Rudder and enclose the picture of the Ostkust. What might please you equally is the editorial in that issue. It’s an excellent editorial (see page 12). I printed and framed it. Regarding the brief 10 volumes mentioned, even though Australian wives are wonderful (sorry USA), I have had no success in bringing the plan to fruition. Perhaps the fault was mine. I could not afford the waterfront home.

Tips for the ideal yachtsman include putting the wife to work

Editorial by Boris Lauer-Leonardi, reprinted from the July 1948 issue of Rudder Magazine

Since it is only natural for man to strive for the ideal existence, let us see what that would mean for a yachtsman, just how should things be arranged so that he could be happy and content and feel that he has reached a higher rung of his chosen avocation.

First of all his house should be located on the shore of the waters he sails. A large, well-equipped workshop should comprise the main floor and a marine railway should lead right into it so that his boat can be hauled in for the winter where he can work on her at leisure with all the conveniences near and protected from the elements. Of course a top grade marine hardware store should be within walking distance, as should his yacht club.

Our yachtsman should have a very well paid job, requiring his presence only four days a week during the winter. During the summer he should not be required to work at all. After all, there is a limit to what a man can do and no man can enjoy his boat and work and do both full justice.

Our yachtsman’s wife should so arrange her household duties that she is free when he needs a helping hand. He of necessity must devote much of his time and energy to thinking and planning, therefore she should perfect herself in all the light and pleasant tasks, such as scraping, sanding, splicing wire and rope, painting, varnishing, etc. This type of activity is no harder than dusting parlor furniture, it is enjoyable, and carries with it the reward that she will retain her looks and girlish figure indefinitely. (This is scientifically proven.)

In general our yachtsman should have an understanding family that shields him from life’s minor programs, which means all those unrelated to boats and boating.

Further, he should know some retired seaman who would act as ship keeper just for the fun of it (and it sure is fun) because, after all, varnish has to be rubbed down and decks swabbed, lines cleared and coiled and so on. This sterling character would of course occasionally toss in some cash for general upkeep just so it isn’t all a one-way proposition.

The picture we paint here is rather restrained as we want to keep it within the realm of possibilities. What we could suggest if we pulled all stops staggers the imagination. Anyway, it’s enough to show what to shoot for and if one of our readers achieves the modest goal here outlined, we trust he will favor us with a brief ten-volume description of how it was done.