The 24-foot Ostkust is an ideal small cruising boat 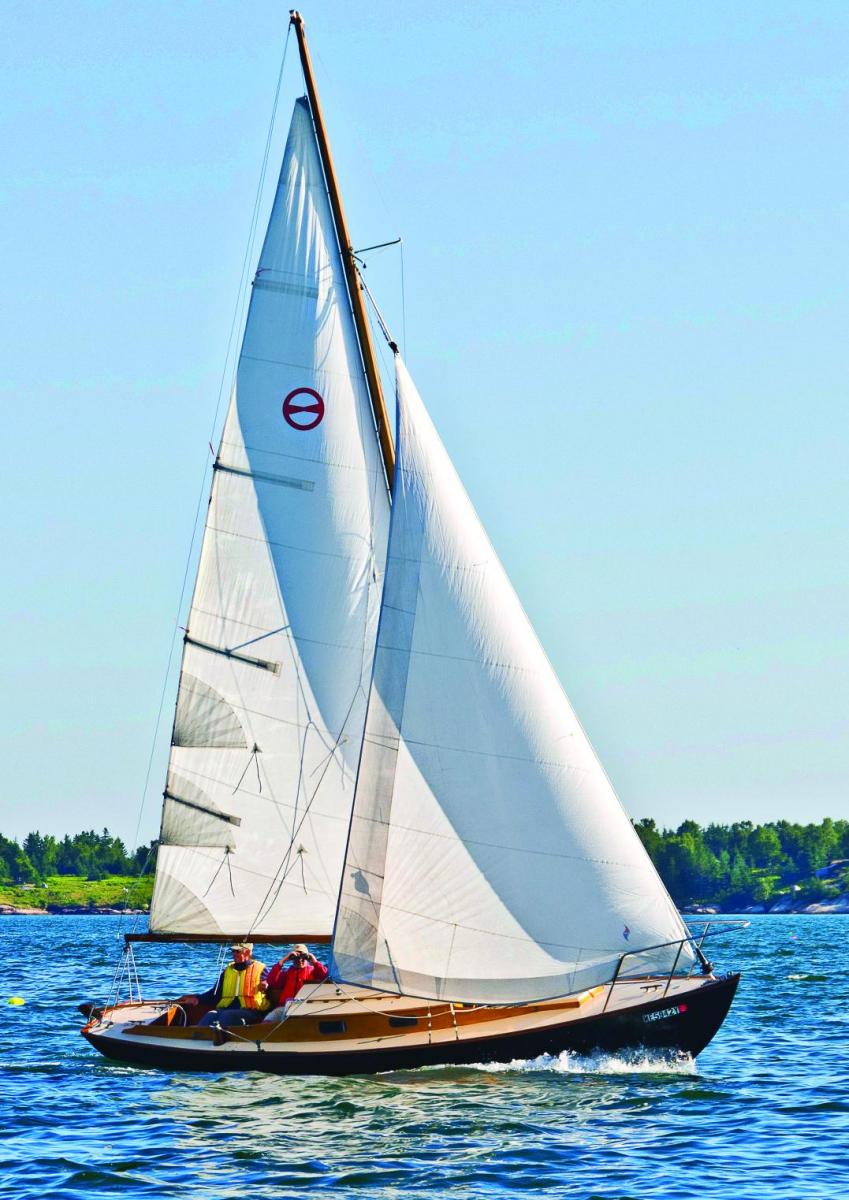 The plans for the Ostkust, which first appeared in Rudder Magazine, called for a 24' long sloop, with a 7' beam and a keel with a draft of 3.58'. The design became quite popular as a small, fast cruiser. Photo by Benjamin Mendlowitz During my 25-year association with this magazine, there has never been a time when the coast of Maine, or greater New England, has failed to offer up designs and designers of interest. I have been encouraged to write about both sailboats and powerboats, and to tackle a wide range of plans. In addition to granting exposure to dream yachts for the “one percenters,” I also tried to describe good boats that people of average means can afford.

Through all this time, I have occasionally regretted an editorial bias toward new designs, because I have a personal desire to include designers who’ve retired, or sailed “over the bar.” A surprising number of splendid old blueprints are accessible for those who want to build a new boat from tried and true lines. These include wooden boats that qualify to compete in classic yacht regattas—a huge plus for me.

Many older designs are actually prettier and better suited for cruising a rockbound coast than some of their modern counterparts. Consider designs by John Alden, Al Mason, Francis Kinney, Olin Stephens, Phillip L. Rhodes, Joel White, Osmond Beal, Ray Hunt, Bobby Rich, or Sim Davis (where to stop?). While you might contemplate updating a keel in the direction of hydrodynamic modernity, and switching from gasoline propulsion to diesel, the fact remains that dozens of Maine boatbuilders stand willing and able to build a new one-off yacht from sharp old lines in a variety of methods and materials that can turn traditional designs into top-notch performers. 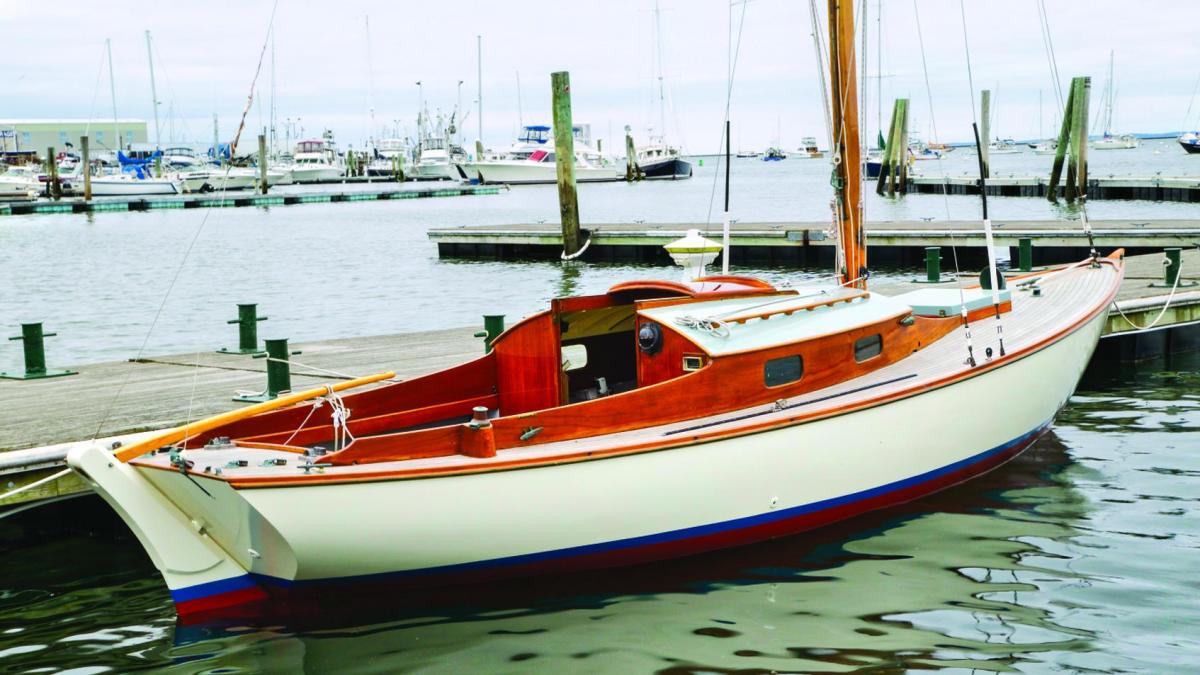 The Ostkust has a roomy, comfortable cockpit and a rudder hung on a slanted transom. In a unique feature, the cabin sides extend past the cabin, and around the mast, coming back together to form the sides of the forward hatch. Photo by Michael O’Neil 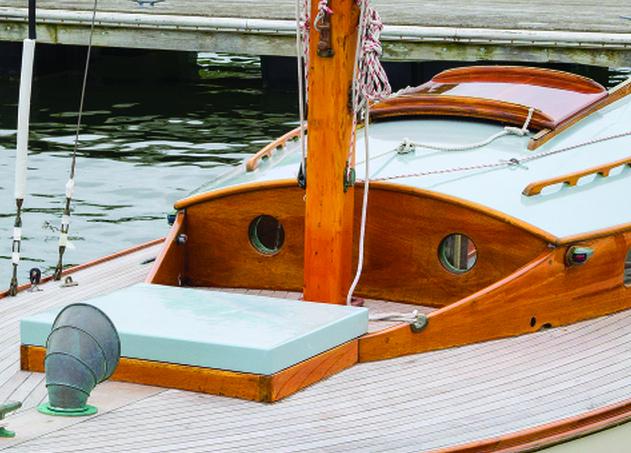 Photo by Michael O’Neil One of those oldies but goodies is the first boat I ever loved. It was a beautiful Ostkust, owned by Ernie Swanson of East Greenwich, Rhode Island, where I first learned to sail. This man and his small boat, just over 24 feet long, thoroughly dominated cruising boat races on Narragansett Bay. This was my introduction to the concept of a sailing hotshot and a hot boat. Ernie’s boat was well built, the planking lined off perfectly with the seams showing through shiny Woolsey paint just enough to authenticate that she was wooden. The topsides were a pretty and practical dark oyster grey with gleaming mahogany trim. I have never forgotten her looks, although I’ll admit her name escapes me.

The Ostkust class was designed by Al Mason during his off hours while he was still working as head draftsman for Sparkman & Stephens. Ostkust is Swedish for east coast. The name was chosen to remind clients of Scandinavian attributes at a time (1944) when some of our popular actresses and models were tall, blonde, and spoke with a fetching foreign accent. The Ostkust design intentionally evoked svelte beauty, plus the tradition of Swedish folkboats. Mason added his stamp to a longstanding tradition in design, attempting to slightly improve upon previous, proven excellence.

Folkboats were fast little lapstrake sloops that sported a Bermudian rig; the almost perfect two-person pocket cruisers. Although the general type proliferated throughout the Baltic nations, nearly all were designed and built in Sweden, where boatbuilders were expert at working with hard, straight-grained coniferous woods similar to our southern pine. The small, easily tacked jib and triangular mainsail made for quick raising and lowering of sails, especially once metal sail track and slides became common features. This suited the Swedish love for hopping between islands.

Scandinavian and Northern European boatbuilders from Viking times onward have preferred to construct their vessels lapstrake. Their planking woods were quite resinous and didn’t swell or shrink much, making them unsuitable for smooth carvel planking, which tends to require open seams and caulking. Another reason may be that a lapstrake vessel, built with overlaps of wood pinched tightly together with closely spaced rivets, might be less likely to spring a leak following an unexpected encounter with a rock—it might flex, but not leak—or at least not leak much.

In an effort to accommodate American tastes, Mason designed the Ostkust to be smooth planked. A boat with a smooth bottom might go a tiny bit faster, having less friction from rivet heads and less wetted surface. I have no data on the science of this, but in addition to my early observation of Ostkust domination in Greenwich Bay, I have raced against a different one in the Eggemoggin Reach Regatta. It also was very fast.

Mason’s Ostkust is a little wider for its length than its European inspiration. As a happy result the cockpit is a bit roomier. A great design is the sum of its parts. The bow is lovely, the sheer may be the best I’ve ever seen. The rig is lofty but practical, with a permanent backstay. And I know of few other designs with both a transom-hung rudder and such a marked rake to the transom—to me it looks terrific. Being able to easily ship the rudder seems wholly practical for a gunkholer.

In a simple cabin sloop, a major point of the design revolves around the shape and proportion of the deck plan. Here Mason revealed his genius. The cockpit coamings were spot-on in terms of height, inward cant, and the perfect “ogee” termination upon the afterdeck. The actual cabin’s length was proportioned at the quintessential dimension to evoke the head of a puppy, although with two eyes rather than one on each side. Then we proceed forward to the piece de resistance: the cabin sides continue ahead, dipping down to protect the base of the mast, then coming together to form the sides for a foredeck hatch. I have never before or since seen a design that handled the combination of coamings, cabin sides, and forehatch in this way. The word “exquisite” comes to mind.

A fixed keel and transom-hung rudder are easy to design for stocky boats with a huge sail area, such as Bristol Channel cutters. However, with a smaller and more manageable sail area, it’s important to keep wetted surface moderate. This can be done in part by slanting the rudderpost, although that makes the rudder itself less effective and often means carrying the tiller pretty far to windward. Mason was way ahead on all this. First he drew a huge rudder—never a mistake in my opinion—then he moved the front of his keel unusually far aft, thereby reducing wetted area. You can get lee helm that way, but the Ostkust proved well balanced. This is one factor that accounts for its speed.

The 24-foot Ostkust accommodates a cozy cabin with berths for two, a basic galley, and, occasionally something more than a cedar bucket for a head—there’s more than enough room.

Mason’s Ostkust came off the drawing board in 1944. My fond hope is that somebody falls for it, and orders up a sturdy, leak-proof, modern-day replica of this ideal little boat. Even better,
I hope this starts a trend.