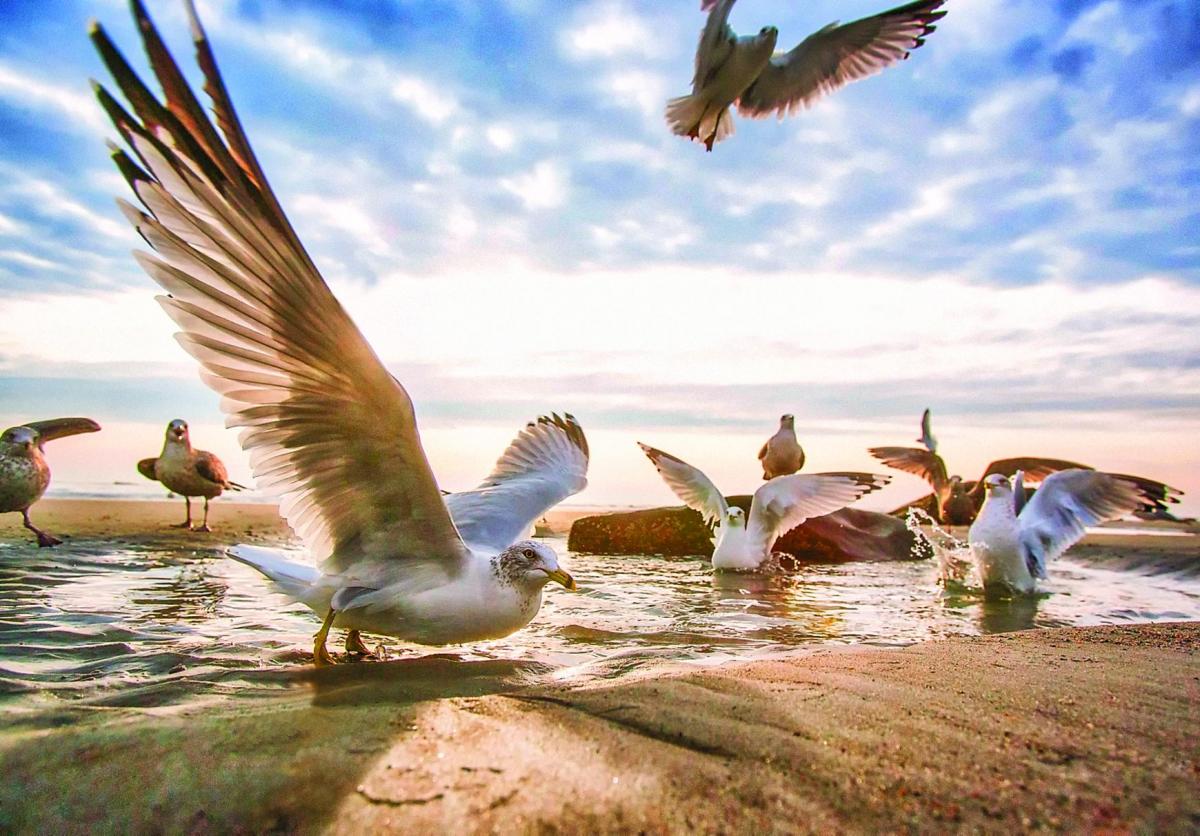 Immortality is a squirrelly concept, usually reserved for the likes of poets, theologians, and radio talk-show hosts. For some reason, sailors also like to yack about philosophical imponderables, and Jake was nothing if not the consummate sailor as well as dockside metaphysician. So I think of him often when I contemplate seagulls.

It was Jake’s burden in life—one of many—to teach me the rudiments of sailing, navigation, and life on the water. Thirty years my senior, he had his work cut out for him. At 25, I was completely ignorant of all things nautical. As it turned out, my lessons went well, and evolved into more than mastering tacking and gybing, parallel rules and compasses.

Even now, two years after Jake passed away at the age of 93, I am reminded of those extra-navigational lessons, especially when I have time to ponder a gang of seagulls. As Joe Devenney has captured so deftly in the photograph here, nine seagulls at a tide pool on Wells Beach can convey a lot about the watery world.

Each gull here is in some state of doing what seagulls do so well: being a lord of the briny deep. That is how Jake appeared to me as those first mistake-filled sailing lessons progressed. These gulls are engaged in everything from quiet observation to male dominance cues, and in all facets of flight from takeoff to soaring. All that and more was also required of Jake as he tried to instill sailing fundamentals into my denser-than-normal gray matter.

The male dominance question is a bit tricky—with gulls as it was with Jake and me. The half-spread wings of a grounded gull are a sign of a male asserting his territorial authority. In the photo, it appears as through one male gull may be challenging another.

I rarely challenged Jake’s authority, but when I did we both endured the consequences—sometimes near-fatal, sometimes just generally soggy. But I learned from those mistakes, just as these nine gulls will eventually learn who is the top bird on this beach.

In due time, I went off on my own, working and living in the nautical world for many years and miles. Inevitably, I stumbled on the old Celtic legend that suggests the soul of a dead sailor takes up temporary residence in a seagull.

These days, when I happen on a band of gulls, I smile and look carefully to see which one might be filling my old-time teacher’s role. For me, there always will be more to gulls than at first meets the eye.

Ken Textor and Joe Devenney collaborated on The Hidden Coast of Maine: Isles of Shoals to West Quoddy Head, published in 2014.