Is there such a thing as an honest cheater?

My sister Sally laid down her queens on the checkered oilcloth, next to her row of jacks. A kerosene lamp on the table cast a shadow over the cards. “I’m getting a beer, you want one?” she said as she got up.

“I’ll split one with ya.” I put down my cards and rocked back on the legs of my chair, looking around the kitchen, and waiting for her to return. 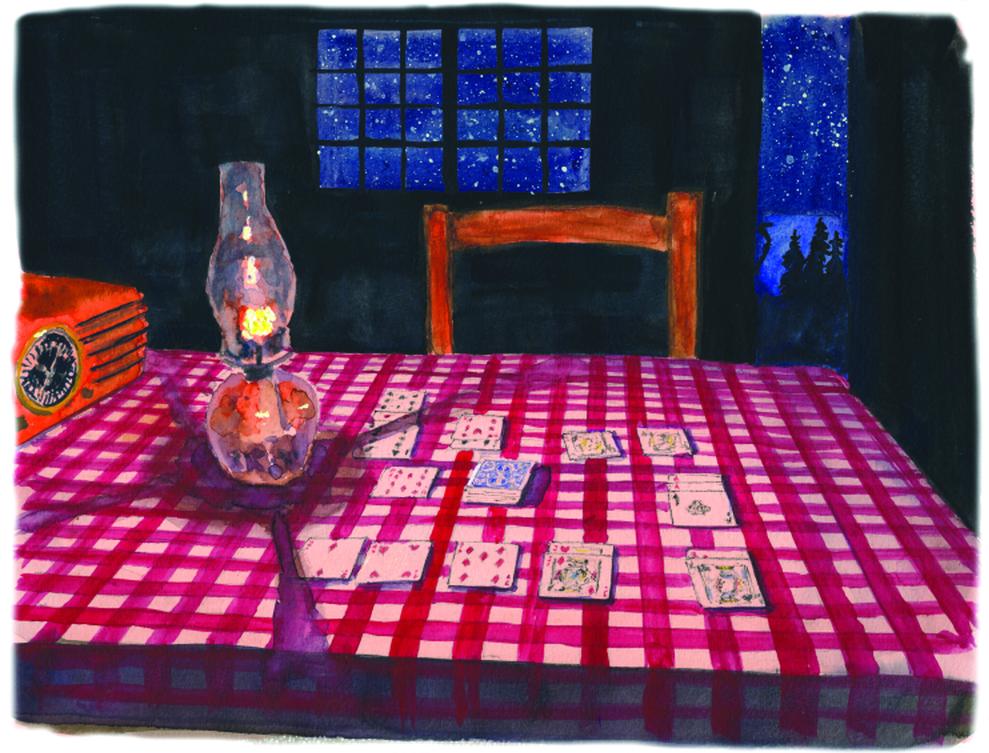 Our Grammy’s camp was one of the oldest on the island. My father said it had been floated over from another island years before I was born. The only two cupboards in the kitchen were a faded orange-yellow. They hung over a black sink. Two water pails sat on a shelf beside it, with a tin dipper on a nail above one. A wide brown rocker with a horsehair seat large enough to hold two children, if they could get along, took up a whole corner. On the edge of the kitchen table was an old radio. I remembered coming inside once when Grammy was listening to Don McNeill’s Breakfast Club variety show, her long freckled arms rolling out pastry for one of her raspberry pies. I could taste that pie. It was sweet enough to make your teeth ache.

I heard Sally open the wooden cupboard under the porch where the damp ground kept it cool. She came back and set a can of Bud in front of me, flipped open the top, and poured half into a glass for herself.

Instead of sitting down, she said, “I think I’ll go pee while I’m up.”

The August night was hot, even for the island. My sister and I were both grass widows for the summer—me because of the Vietnam War and she because of an impending divorce. We were staying on Pleasant Island. Between us, we had five children, all of them under eight years old, tucked into two double bunks. I got up and looked at the tangle of skinny limbs, all so jumbled together you couldn’t tell where one child’s arm or leg left off and another one’s began. The oldest, a boy, was alone in the top bunk where he had crawled to get away from the crowd. I tucked a dangling foot back under the covers and smiled at a sticky marshmallow mustache on the youngest.

When I returned to the kitchen table, Sally still wasn’t back, so I sat and looked at the deck of cards, hoping I’d get lucky soon. She’d won almost every night since we’d begun playing. That’s what I was thinking when I reached over and quickly fanned through the deck, pulling out all the remaining wild cards and rearranging them to my advantage. I could hardly keep from laughing as my sister came in, asked about the kids, then sat down and looked at me with eyebrows raised.

“What are you smiling about? Whose turn is it anyway?”

Actually my plan depended on whose turn it was. If we didn’t take the cards as I had arranged, I wouldn’t get the right ones.

“It’s your turn, of course. But let’s make this a little more interesting. Why don’t we play for something?”

A light flickered in her brown eyes and the hint of a smile played on her lips. “What’d you have in mind?”

“The loser has to take all the kids tomorrow, and the winner gets a day off.”

A long look. I could see she was considering it with her usual self-confidence. She hardly ever lost at canasta or checkers. I hardly ever won. She’d always been older and smarter.

But she wasn’t cunning.

The game started again. We talked on and off with lowered voices about the handsome young lobsterman on the next island. We thought he looked just like the actor Robert Goulet. He strutted around every day with no shirt on, showing off his tan physique as he lifted and piled up his wooden traps onto his wharf. I knew he was aware of us watching him from our beach, eyes wandering up from our magazines as we sat on a blanket, pretending to watch the kids in the water. He might not have known we had binoculars, though, when we watched him from our porch.

I took a long sip of my beer and drew a wild card. She looked disappointed that I’d gotten lucky. When her turn came, she drew nothing. My turn came again and I drew another wild card. She bit her lip. The third time it happened, she couldn’t suppress a yell and slammed down her cards. I could see the steam rising from her. I told her, “Drink your beer, don’t take it so hard.”

We finished our can of beer about the time I won.

“I want another beer and I want another game,” she said, as she pushed back her hair, stood up, and stomped out through the door.

“Okay,” I said. This time I won it almost fair and square. She walked back in before I could arrange more than one or two cards.

But, well... she was my sister, and my conscience was bothering me, so I finally told her the bet was off and that I had cheated.

She never did believe me, though. I don’t think she thought I was that clever.