The weird and wonderful jellyfish 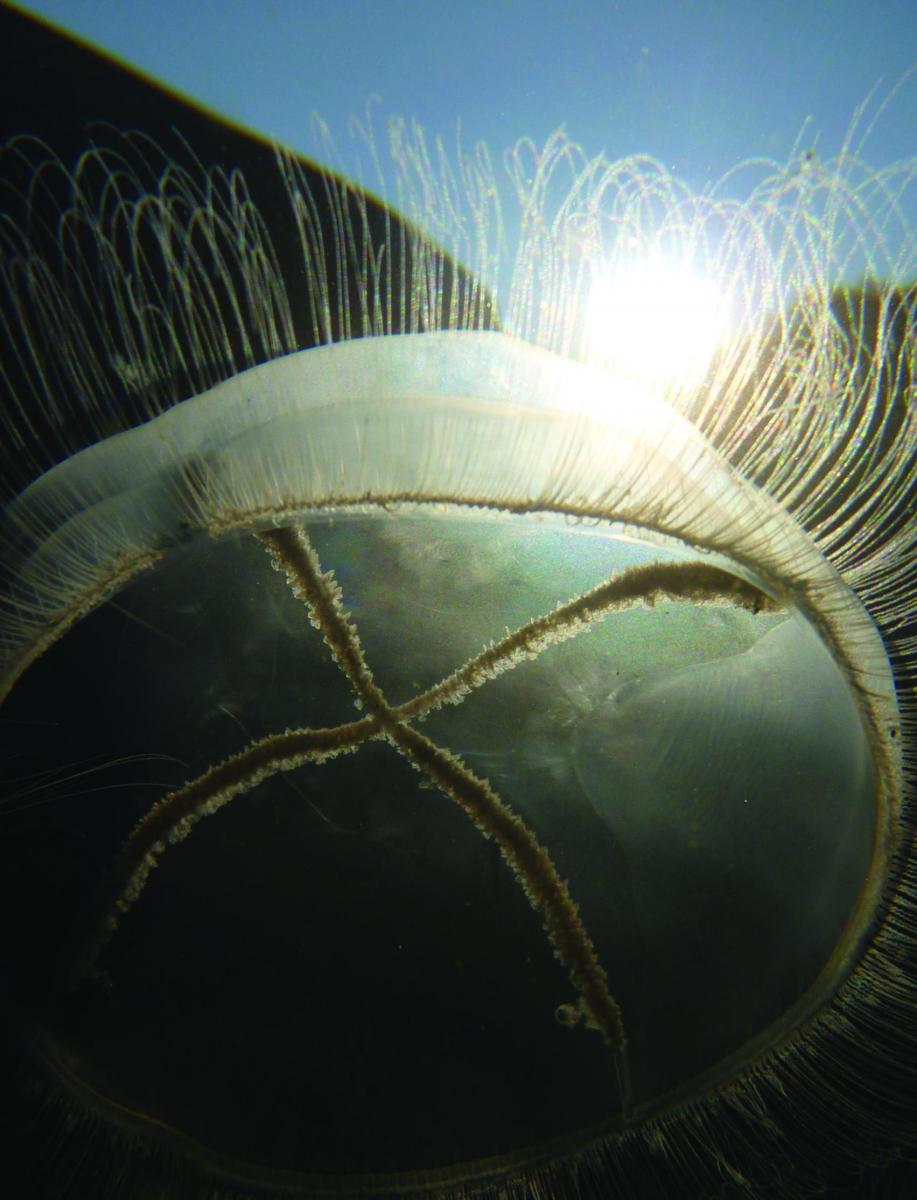 Zoe Weil, president of the Institute for Humane Education, photographs jellyfish such as this whitecross from her paddleboard. She holds her waterproof camera underwater and clicks away.

The two-masted schooner was sailing downeast, five miles off Great Wass Island, when its crew hauled a four-foot frame with a long trailing net up out of the water and onto the deck. Despite nearly an hour under tow, the net yielded a mere tablespoon of living matter. It was August 1912, and oceanographer Dr. Henry Bigelow had been towing nets all night, and for many days prior, to take stock of the sea life in the Gulf of Maine. Day after day, each tow had brought with it a rich abundance of animals. But here, at what he labeled Station 33, he was surprised to find only tiny Staurophora—a whitecross jellyfish.

For the next hundred miles, as he surveyed the waters of the gulf from Grand Manan Island down to Penobscot Bay, the pattern was the same—the oceanographer found a steady stream of jellyfish, and little else. He was mystified. “This was quite the contrary to what we expected, as the northeastern corner of the gulf and the Bay of Fundy have always been credited with a rich pelagic life,” he later wrote. “Our nets did not yield a single young fish along this whole stretch of coast.”

Only when he neared Monhegan Island, at Station 40, did his nets once again fill with abundance. Within the many volumes that Bigelow penned on the Gulf of Maine, his encounter with whitecross jellyfish is slightly more than a footnote. Since that time, that trend has continued—there has been surprisingly little documentation or research on jellyfish and other gelatinous animals in the Gulf of Maine. 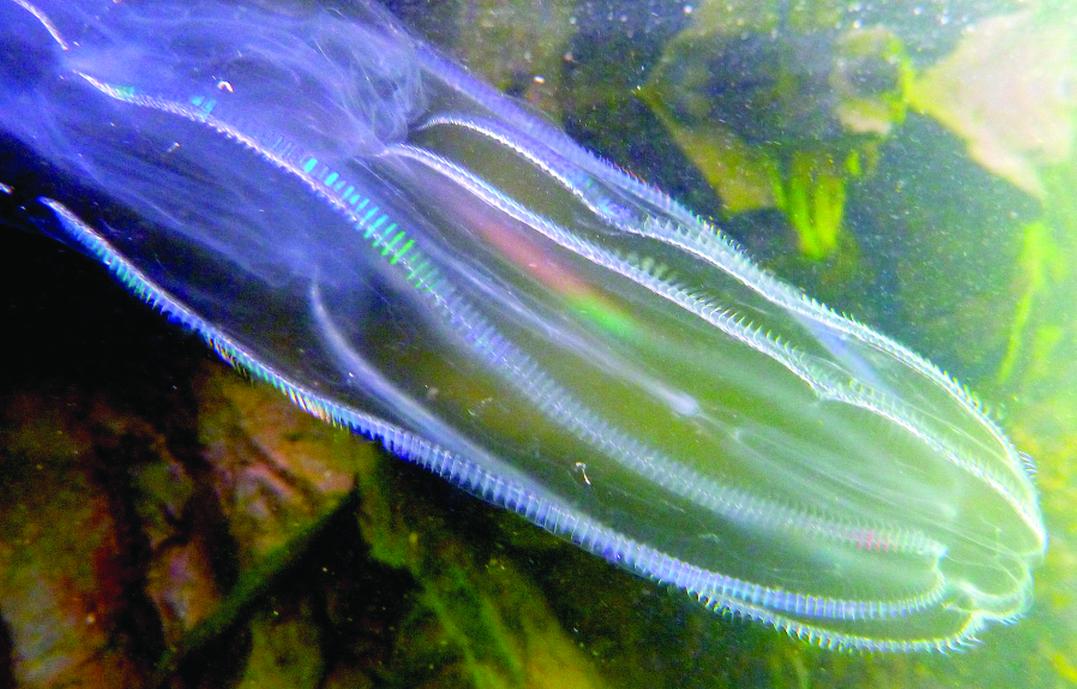 Comb jellies, such as this one found swimming off Lubec, can grow up to six inches long. Rows of cilia (tiny moveable hairs) divide the body into sections and help it move slowly through the water. The moving cilia refract light into a rainbow of colors. 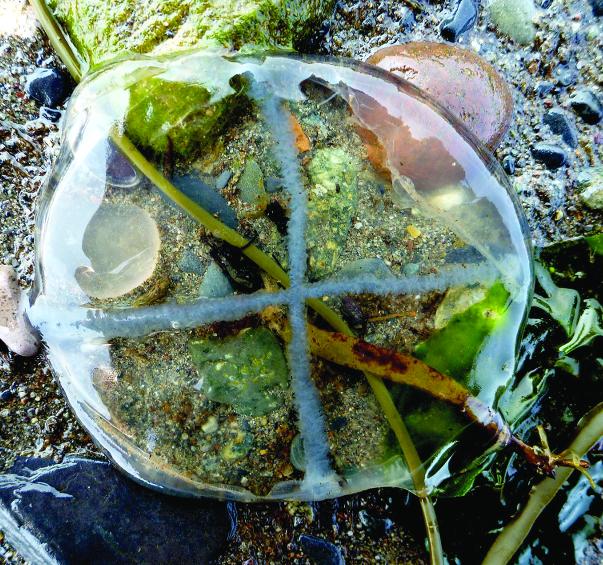 Unlike the lion’s mane which has a painful sting, whitecross and moon jellies do not generally inflict pain. That has changed in recent years as jellyfish sightings have made headlines up and down the coast.

A century after Dr. Bigelow’s encounter, almost to the day, I had a similar experience to his. I was on a lobsterboat off Grand Manan Island in the summer of 2012, pulling nets with a group of Bowdoin College students. Each haul came up dense with the comb jelly Pleurobrachia. The following spring, in Harpswell Sound, it was the same. Our nets brought up nothing but Beroe, another comb jelly.

While oceanographers like myself were scratching our heads, the sea jellies must have been busy. The next summer, 2014, brought with it a massive outbreak of moon jellyfish stretching from Casco Bay to the midcoast. Millions of jellyfish filled the sea, catching the attention of beachgoers and boaters across the state. I deployed a citizen-reporting network to track these events, and in 2015, received hundreds of reports, including a notable outbreak of millions of whitecross jellyfish downeast, quite close to the location of Bigelow’s observations 103 years earlier.

Intuition tells us that such outbreaks are a sign of an unhealthy ocean. While there is no single cause for jellyfish blooms, they are often associated with warming waters, low oxygen, overfishing, or heavy coastal development. Massive outbreaks of jellyfish can cause problems beyond the annoyance of beachgoers. In Japan, for example, large populations of jellyfish have been known to clog fishing nets and diminish the catch. In the Black Sea, an invasive comb jelly contributed to the collapse of other fisheries. In the United Kingdom, jellyfish have wiped out farmed fish on a staggering scale. And in Sweden and elsewhere, they have clogged the cooling intakes of nuclear power plants, causing shutdowns.

There were reports of swarms of both moon and whitecross jellyfish last summer in downeast Maine and also in Canada, where they clogged fishing weirs in the Bay of Fundy. This photo was taken in Charlottetown, Prince Edward Island, on July 4. “They were very close to the boardwalk pylons and boats, and more kept arriving in the 15 minutes or so that we stood and watched,” said Jacky McGowan, who took the photo. 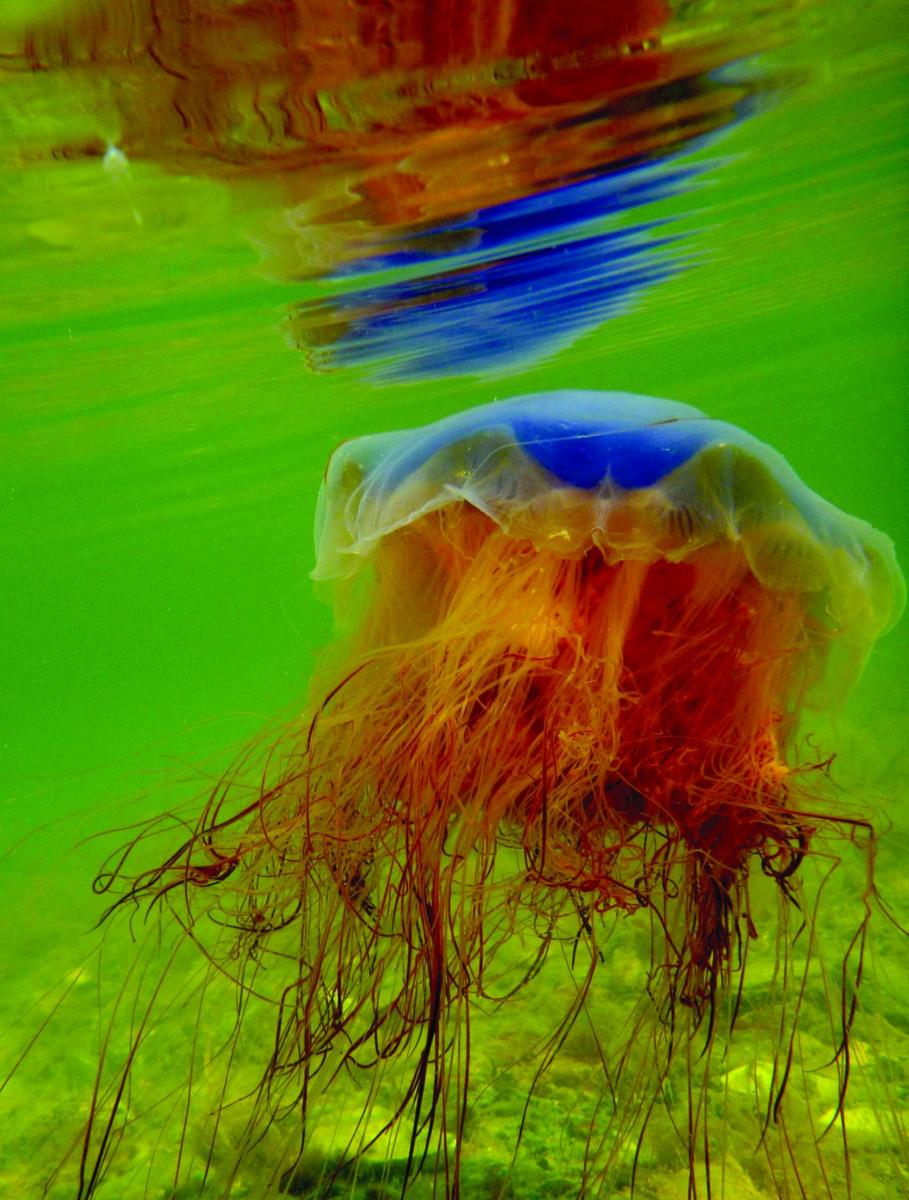 Zoe Weil of Surry photographed this lion’s mane jellyfish in Patten Bay last July. She said she saw more lion’s manes last summer than she had in the past 18 years. For all of these reasons, it’s common to think of sea jellies as a nuisance and to overlook the absolutely fascinating world they create.

If space aliens ever decide to visit Earth (if they haven’t already), I doubt they will be stranger than our own gelatinous plankton. Take doliolids for example: they live fused together in large colonies where individuals share their very blood with each other. As the colonies die, the doliolids’ gonads detach and swim away, setting off on a quest for mates. From these free-swimming and -mating gonads, new colonies are born. Other sea jellies form colonies longer than a blue whale, making them the longest animals known to science. The most well-known colonial sea jelly is probably the Portuguese man-of-war, but there are hundreds of other species. One example, Hippopodius, can become completely invisible and then reappear in solid white or flashing colors.

Sharing a completely different lineage are the myxozoans, tiny descendents of jellyfish that have evolved to live parasitically inside fish and other animals. Some attack the brains of salmon and trout, causing whirling disease, where the fish are doomed to swim in endless spirals. Other myxozoans have escaped the ocean, and live alongside us on land, parasitizing small mammals.

This chart shows Dr. Bigelow’s 1912 sightings of whitecross jellyfish (shaded areas) compared with citizen sightings during the summer of 2015 (yellow circles). The base chart is the one used by Bigelow. Image courtesy Dr. Nicolas Record/Bigelow Laboratory for Ocean Sciences The classic tentacled jellyfish are known as medusae. The philosopher Aristotle struggled to classify them. He decided that they must be something between plant and animal, for they grow plantlike from the sea floor (or from floats, docks, or even fish), rooted fast and sprouting branches as they grow upward and outward. Instead of bearing fruit, like the plants familiar to Aristotle, they produce ephyra—miniature versions of the adult jellyfish—that break free of the tips of the branches and swim away. 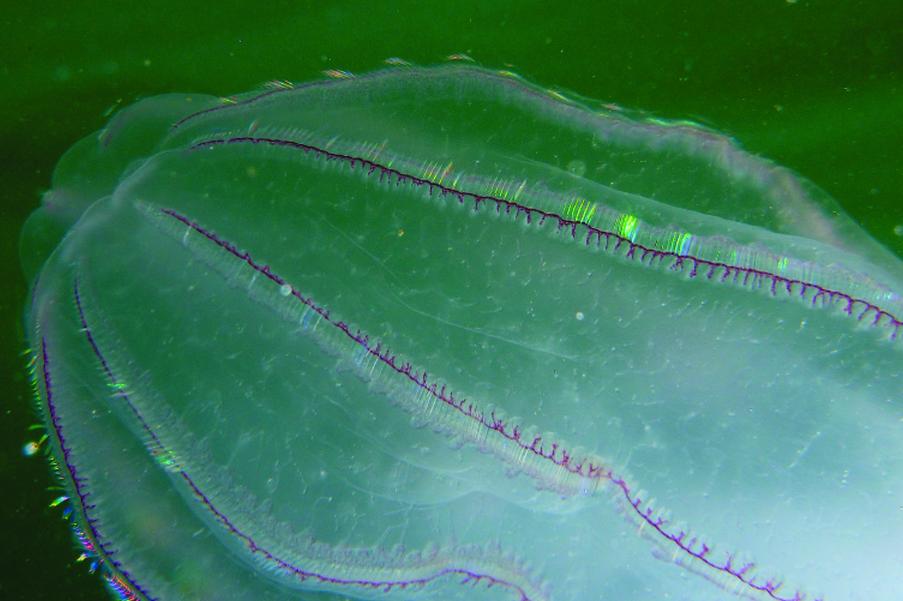 This close-up of a comb jelly shows its eight sections and rows of cilia that resemble combs, hence its name. Combs have tentacles but do not sting. Of all the medusae, though, perhaps the most intriguing is another non-native, Turritopsis, the “immortal jellyfish.” If there were ever a creature to stretch our minds beyond the confines of life as we know it, it is this one. This jellyfish can reverse the aging process and revert to immaturity as often as it needs, hypothetically living indefinitely. New research is showing that there may be other species, including the moon jelly,  that can age in reverse as well.

These creatures are in so many ways alien to us, and perhaps that’s why we often view their arrival as a bad omen. Yet they are also fascinating and beautiful—just look up images of the Darth Vader jellyfish, the fried egg jellyfish, or the blue button jellyfish. And many of them are valued as a delicious edible treat, as new “jellyfisheries” pop up around the world. Beyond their beauty and nutrition, they serve important functions in the sea. Because of the one characteristic they all share—a gelatinous body—they can survive in low-oxygen ocean “dead zones,” where other animals perish. Some of them can also speed up the draw-down of carbon from the atmosphere. As the ocean buckles under the increasing burden placed on it by our civilization, perhaps the sea jelly has an important role to play. As Bigelow once wrote, “Nothing in the sea falls haphazard.”

Disclosure: The author shares a distant ancestor with modern-day jellyfish.

Have you seen a jellyfish on the beach or at sea?

Email reports of jellyfish sightings to: jellyfish@bigelow.org.
Include the date, time, location, and a description or photo.
View a  map of 2015 sightings at:
https://www.bigelow.org/research/srs/nick-record