Discovering the places you can go in a fast boat 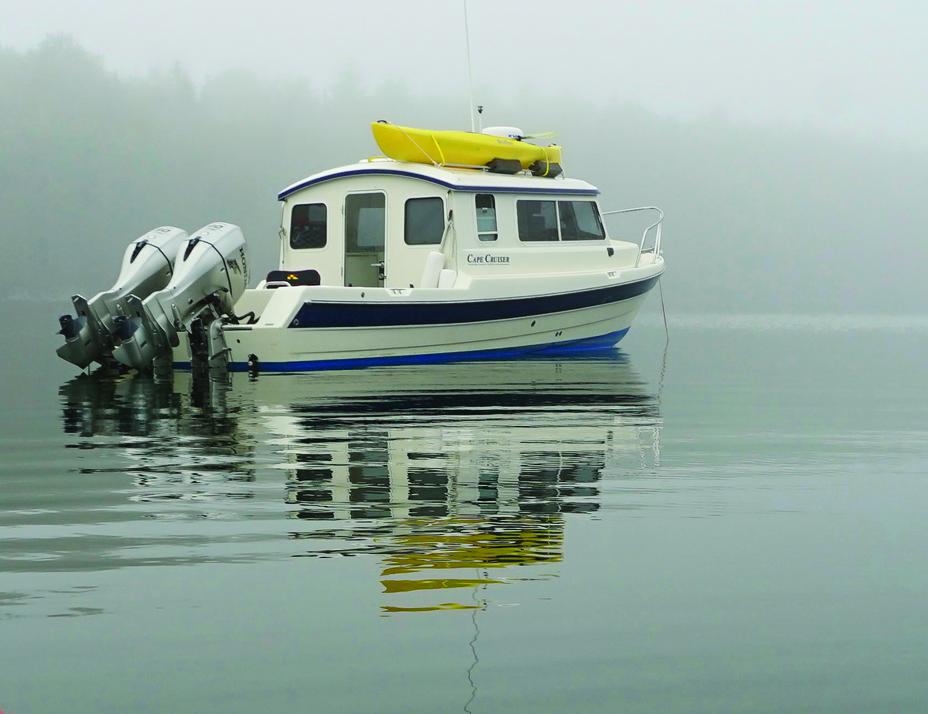 The new boat has been perfect for overnight adventures. Here, she is moored in Pulpit Harbor. Photographs by Joe Upton

For a while I had a cabin in Alaska, 750 miles from my houseboat in Seattle. Most years I went back and forth by boat at least once, sometimes twice. One fall when the weather was bad, it took almost a month: three days on the hook waiting for good weather for every one day of traveling. My wife and I had a big sailboat that went 8 knots on a breezy day. We sailed all the way from Seattle to Puerto Vallarta at 8 knots.

Then finally last year, we sold the sailboat. We were ready for a powerboat so we could expand our radius of exploration from our little place on Old Harbor on Vinalhaven Island in Maine. We weren’t sure what we wanted, but I knew it needed to be substantially faster than 10 knots and something that we could kayak from.

I saw this sweet little 25' pocket cruiser in Rockport that got me thinking about the possibilities: two Yamaha 50s, maybe a 15-knot cruising speed, head, stove, sink, table by the window. Then for the same money I found this puppy called a Cape Cruiser 26, in Florida. Built in 2008 and kept inside, two Honda 90s with 50 hours on them—a total creampuff. Maybe. But it was in Florida.

I couldn’t get there to check it out for a month. Would the seller hold it?

Here’s how it went. First, I made some plane reservations and e-mailed them to the Florida guy so he knew I was serious. Then came a note: “Hey, Joe, there’s guys showing up here with cash. How serious are you?” So I sent him a grand to hold it. No paperwork, no contract.

I told a friend. “Are you stupid?” he exclaimed. Maybe I was.

In May I finally flew to Tampa, and followed Google Maps two hours on the highway, then off onto side roads, then dirt roads. Trees knit together over my car. I felt like I was in a Stephen King book and began to think it was all a hoax, that I’d been had—the kind of Craigslist scam you get warned about. 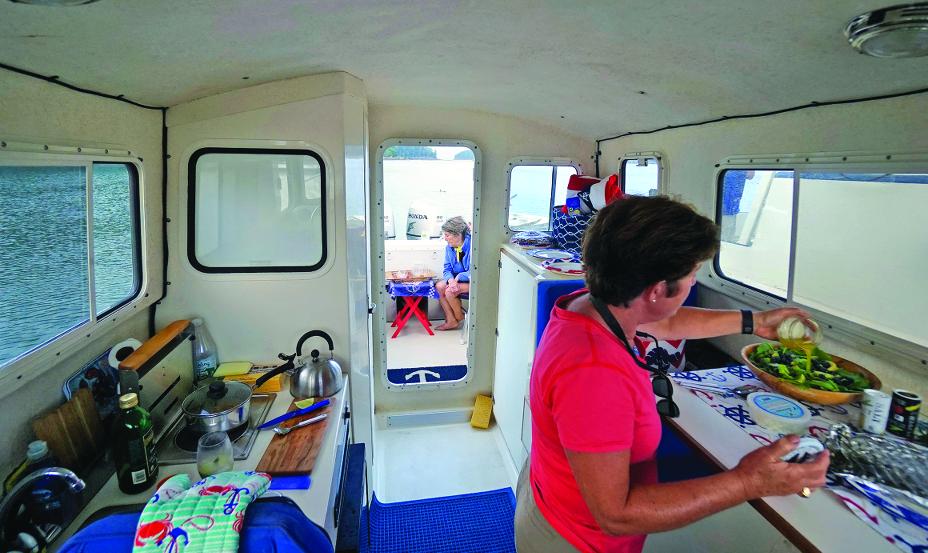 Mary Lou Upton makes a salad in the Cape Cruiser’s small galley area during a cruise to Merchants Row. Then I came to the address: a little marina on the Homosassa River, Spanish moss hanging from the trees. And the Cape Cruiser? It was spotless with owner’s manuals taped to the never-used fridge and in the toilet bowl of the never-used head, plus it had a nice big screen plotter. We launched the cruiser, and off we went, me thinking I would be happy if it would do 18 knots at 4,000 RPM. But wow: 24 knots at 4K; then at the top end, almost 38 knots with the Hondas just purring.

Done deal: yahoo! The seller brought down a cool six-pack of Coors with the paperwork.

We arranged to get the new boat trailered to Maine, then headed over to a riverside pub: all you could eat local boiled shrimp for $15, schooners for $4. Good thing there was a motel next door.

Journey’s End in Rockland, Maine, painted the bottom. My wife, Mary Lou, and I took the ferry over from Vinalhaven to pick the boat up. She found four folding chairs for the cockpit at Hamilton Marine and we lugged them down to the marina where we found our boat already in the slings.

Two friends joined us for the launch. The little cabin was so cozy with the four of us. Toasts all around, and across the shining bay and through the islands we went. We tied the boat up at our float on a perfect, still, high-tide evening: pinch me, pinch me!

I ordered up a nice little Furuno radar. Then just by chance, Mary Lou found the sweetest kayaks up in Northport: 42-pound 11-foot Old Town Herons—perfect for older paddlers (our 70-pound 14-foot Old Town Nantuckets were too long and heavy to lift up to the roof of the boat). The next challenge was getting from the kayaks into the boat. I tried it via the swim step: awkward, but doable. 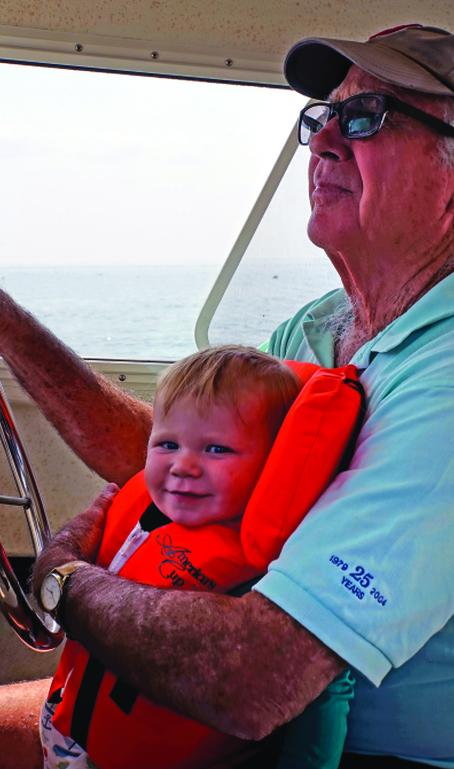 “Happiness is helping Grandpa steer,” said Upton, pictured here at the helm with his grandchild. Then I saw the nice solid grab handles on the back of the cabin and thought, just maybe, a piece of line tied to the handle will work. This time I came alongside, grabbed the line, and could just step from the kayak carefully into the cockpit: piece of cake!

So began a wonderful series of overnight trips, taking advantage of the two comfortable bunks forward. Over to North Haven for dinner at Nebo Lodge, then to Perry Creek to drop the hook in the thinnest foggy light. Merchants Row, McGlathery, Greens, St. Helena, Big George… all those sweet places that had seemed so far away before. Drop the hook, launch the kayaks, explore, then drinks and dinner in the cockpit, with the islands glowing like watercolors in the fog: wow, wow, wow.

Once we took our daughter, son-in-law, grandson, their big cream-colored golden retriever, and another couple with two young children over to our favorite beach in the White Islands in Hurricane Sound. We towed the Whaler, thinking all would want to hit the beach. But no, the little kids were having so much fun on the V-berth, and their parents so much fun sitting in the sun in the cockpit with glasses of wine, that only the dog wanted to go ashore.

And this: coming back from Stonington, our little grandson fussing, not happy anywhere. Then Mary Lou put him on my lap with his hand on the steering wheel. Suddenly he was content, but not as much as I.

Only one little issue to report, not even a glitch, just an observation. We were buzzing down the coast, between Monhegan and Seguin islands, clipping along at a nice comfortable 20 knots in a thin fog, with at least a half-mile visibility. Then my wife looked at the GPS and said “Twenty? What’s wrong with thirty?” She pushed the throttles forward, eager to get around the corner at Cape Small, and up into the New Meadows River to see our little toddler grandson.

I remember those 10-knot days in big fishboats. Autopilot on, walking up from the galley to the pilothouse with a fresh coffee, time to look at the chart spread out on the chart table, put your feet up and watch the passing land and seascape. It isn’t quite like that at 20 knots, or, God forbid, 30; you come up on things pretty fast.

Maybe someday, as we get older, slower will be good again, and perhaps we can even have room for bunks for the grandkids.

Joe Upton owned and operated fishing boats in Maine and Alaska for 25 years. He wrote Amaretto (International Marine Publishing, 1986), which was republished in 2015 as Herring Nights: Remembering a Lost Fishery, by Tilbury House. He lives in Bainbridge Island, Washington, and on Vinalhaven Island.