On a brisk June day last summer, biologist Keenan Yakola gently lifted a defiant Arctic tern from her ground nest on Seal Island, 21 miles east of Rockland. The incubating hen wore a numbered metal leg bracelet, indicating that she had been banded in a previous year. Yakola, who works for the National Audubon’s Rockland, Maine-based Project Puffin, wrote down the band number, then released the bird. 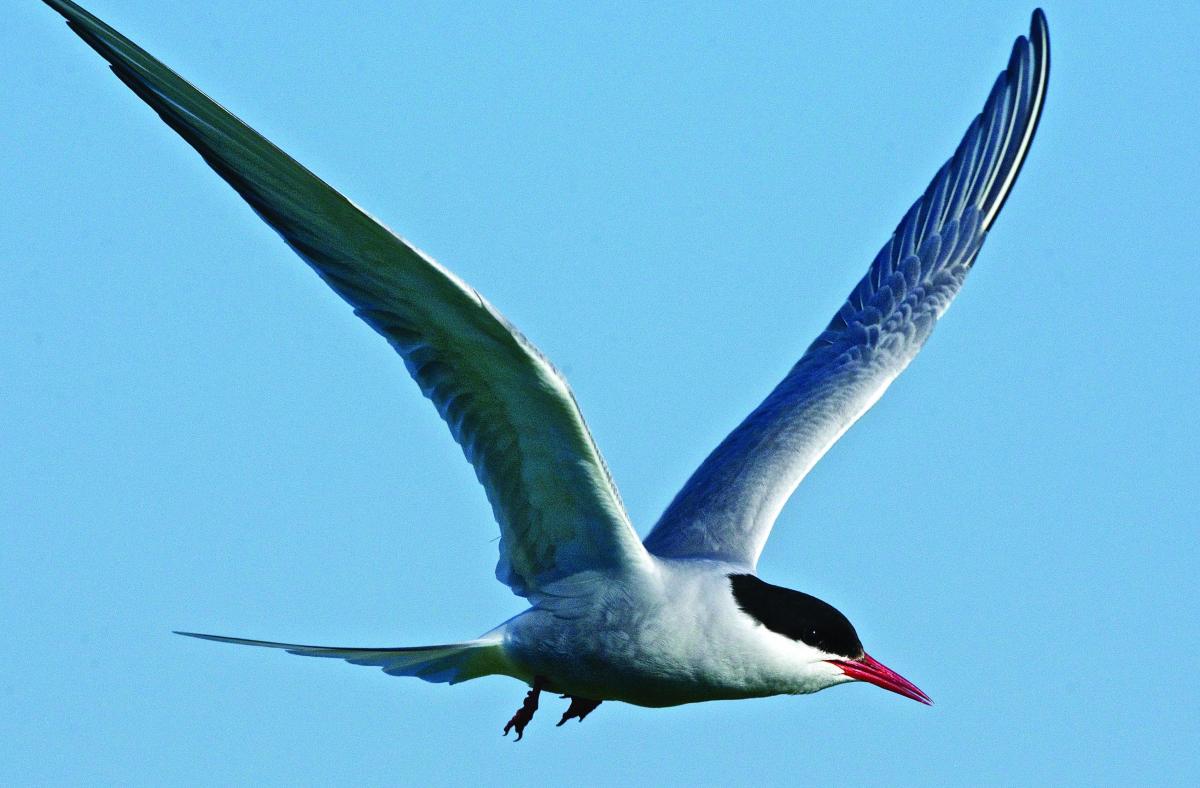 The Gulf of Maine’s Arctic terns forage at sea near whales. They dive to capture Atlantic herring and other small fish forced to the surface by the large marine mammals. The terns nesting on Maine’s coastal islands travel an average of 55,250 miles each year back and forth between the Gulf of Maine and Antarctica. 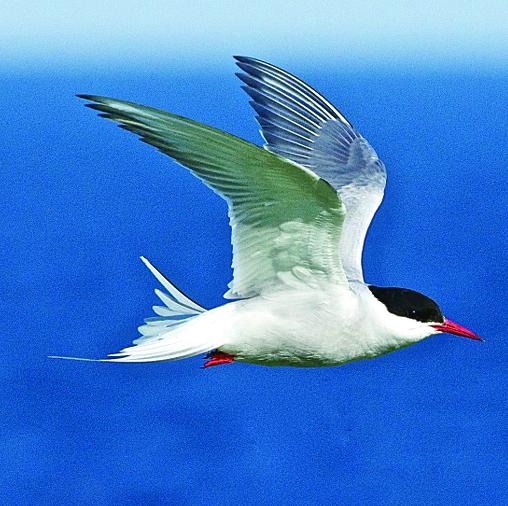 It turned out that this tern had been banded as a nestling 29 years earlier on Matinicus Rock. Finding her again after so many years sent international seabird biologists scurrying to answer a mathematical question: How many miles has one of the world’s oldest terns flown in her lifetime?

Prior to 2012, answering the question would have been impossible. However, thanks to the geolocator, a relatively new animal tracking device, it’s now possible to map bird migrations and calculate flight miles. Geolocators record latitude and longitude as well as ambient light levels. By measuring the differences, researchers can pinpoint a bird’s global position by date.

In 2010, geolocators were attached to 30 Arctic terns, including several from Seal Island, a 65-acre seabird-inhabited island protected by the Maine Coastal Islands National Wildlife Refuge. In 2012, when Project Puffin and the U.S. Fish and Wildlife Service biologists recaptured the terns and analyzed the data, they were astonished by a treasure trove of information that revealed the terns’ migration routes.

Terns are graceful, colorful, four-ounce seabirds built to fly effortlessly from their Arctic and sub-Arctic nesting regions in Europe and North America to wintering grounds on Antarctica’s ice shelves. Before the geolocators, scientists had only a fragmented picture of a tern’s convoluted migratory pathway from Maine to the far reaches of the southern hemisphere.

Learning more now is especially important, said Brian Benedict, a seabird specialist with the U.S. Fish and Wildlife Service, since Maine’s Arctic tern population has declined 40 percent since 2004. “We handle the minimum number of terns because it’s stressful for them,” said Benedict, “but data from tracking studies helps us do a better job of protecting their populations.” 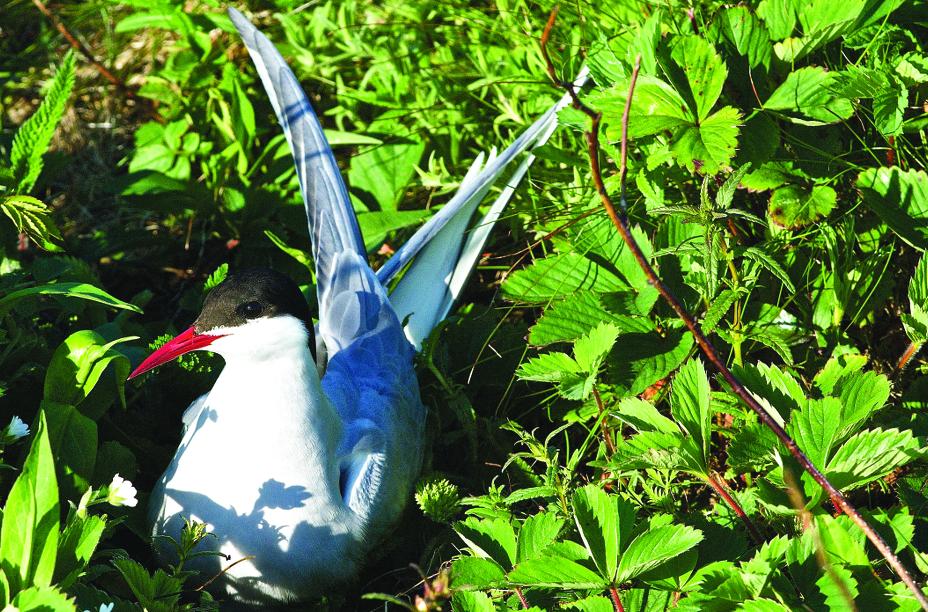 An artic tern in its nest on Seal Island. Biological information gleaned from the geolocators included a few contradictions to conventional wisdom. For example, in August, when most birds begin flying south, the tagged terns first migrated northeast to Nova Scotia. From there, they flew east across the Atlantic Ocean to Europe, and then south along the west coast of Africa before continuing to the Indian and Southern oceans. The geolocators also identified three important marine regions where the terns rest and feed: the mid-Atlantic between Nova Scotia and Spain; southern Argentina; and a wintering area in the Weddell Sea, east of the Antarctic Peninsula.

Several of the terns tagged in Maine flew along the west coast of Africa, and then re-crossed the Atlantic to reach the east coast of South America before proceeding to the southern tip of Argentina. Seabird biologists calculate that during fall migration, Arctic terns travel an average of 27,168 miles, taking an average of 92 days to reach their wintering ground—a feat accomplished by flying an average of 295 miles each day.

Others flew slightly different routes, but all 30 marked birds ended up in Antarctica to spend the “winter” (technically summer in the southern hemisphere). The Maine birds stayed an average of 152 days on the windy continent’s ice shelves alongside penguins, bathing in near 24-hour sunlight in the food-rich waters of the Southern Ocean’s Weddell Sea. During May, the birds made a beeline for their Maine coastal island homes by flying nearly 14,000 miles in 29 days, an average of 472 miles per day.

Dr. Stephen Kress, National Audubon’s director of Project Puffin, oversees seabird restoration efforts on Seal Island. The island, once used as a Naval bombing target, was transferred to the U.S. Fish and Wildlife Service in 1972.

“The tracking study points to the importance of protecting the terns’ entire world range,” said Kress, “including the sensitive feeding areas at sea. The study demonstrates that the Arctic tern belongs to both hemispheres and individual birds require secure passage through four continents. Their flyway is the full Atlantic Ocean.”

Kress has determined that an Arctic tern’s year-long trip from Seal Island to Africa, Antarctica, and back to Maine covers 55,250 miles—the longest known annual migration of any animal on the planet. Based on these numbers, that 29-year-old Seal Island tern has flown approximately 1.6 million miles in her lifetime.

“Each bird has its own story,” said Kress. “Terns nest within inches of each other but they may migrate a thousand miles apart.” The oldest known Maine Arctic tern lived to be 34. So this “senior citizen” from Seal Island, still alive and well, is likely to rack up many more frequent flyer miles before she’s done.

Ron Joseph is a retired Maine wildlife biologist. He lives in Waterville.