SADIE has many names: “Sad-Eye Sadie” and “Stubborn Sadie” among them, but her favorite is “Sternman Sadie.” A young English setter, she helps Capt. Tony Pellegrini with his lobstering. He has a noncommercial lobster license and fishes from Great Wass Island in Beals, Maine, usually from his 16-foot skiff, but sometimes from his Loon twin kayak.

“This September I was heading out in the kayak when three-month old Sadie started howling from the beach. She insisted on ‘helping’ me haul,” he said. “We hauled the entire string of traps and Sadie made sure the lobsters were A-OK.”

Sadie lives in Holden, Maine, with Captain Tony (in real life he is an attorney with Rudman Winchell in Bangor) and Doctor Mumma (trauma surgeon Joan Pellegrini). Sadie has learned “come,” “sit,” and “heel” pretty well, but she still gets a bit confused between “port” and “starboard.” Next summer Tony hopes to have her haul the traps, while he relaxes. One can dream, right? 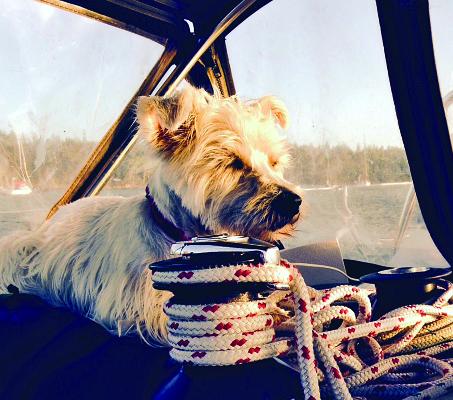 OTIS, a two-year-old West Highland white terrier mix, loves boats, particularly those built by the Hinckley Company. His fine taste and affinity for the classic craft aren’t too surprising since his owner, Bob Pooler, is brokerage manager for Hinckley in Southwest Harbor, Maine. Otis loves to cruise the saltwater coast between Mt. Desert Island and Camden.

The boat-savvy canine isn’t just a Hinckley man, however. He is happy to be seen on other craft, and is shown here relaxing under the dodger on a Tartan 372. He also enjoys freshwater adventures from the deck of a Bayliner 185 on Beech Hill Pond in his namesake town of Otis, where the Poolers have a camp.

The Pull of an Island