Going To the Spring 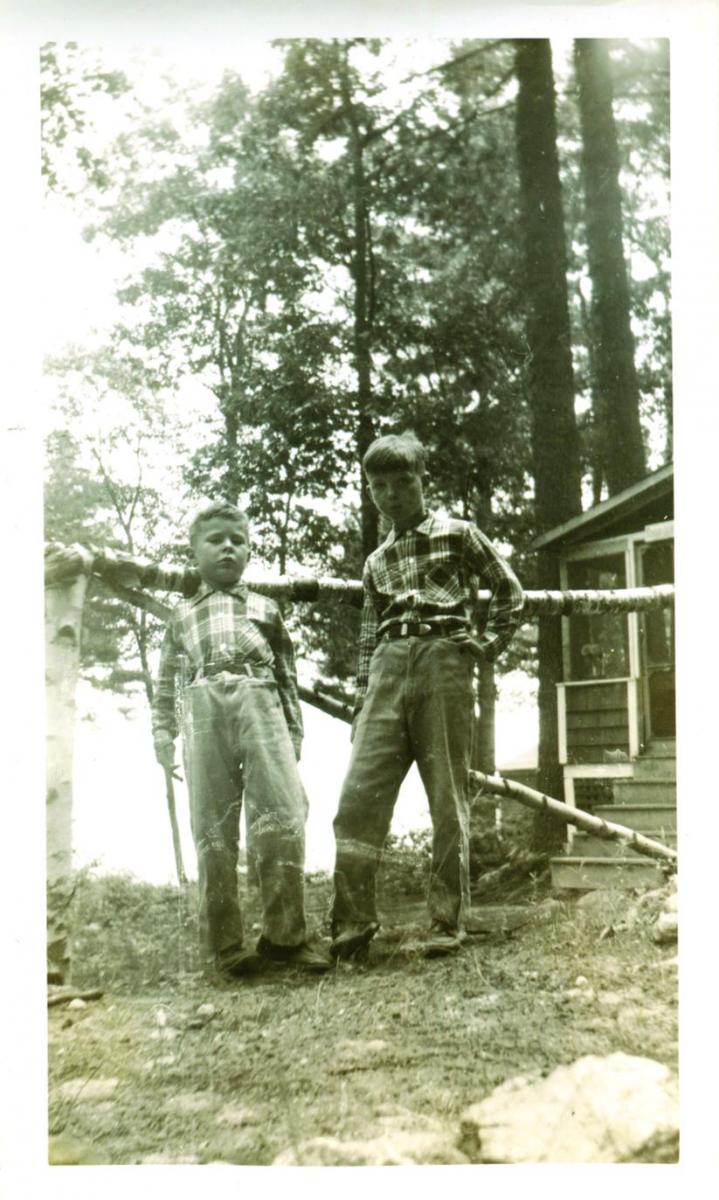 The author and his older brother, Ted, during a childhood vacation at Jordan’s Camps in Fryeburg. Photo courtesy David E. Morine During the 1950s, my family went to Jordan’s Camps in Fryeburg, Maine, for two weeks every summer. The camps consisted of eight rustic little green cottages nestled along the shore of Lovewell Pond. They were owned and operated by the Reverend Jack Jordan. With his thick accent, quiet reserve, and obvious love of hunting and fishing, Reverend Jordan was, as my father once noted, “more Mainer than minister,” and none of his guests would argue with that. Whenever we saw the Reverend he was dressed in a white T-shirt, khaki pants, and black high-top sneakers, and was painting boats, fixing screens, picking up the trash, and doing all of the other things it took to keep the camps running. Ayuh.

Going to Jordan’s wasn’t like going to some high-end resort. The Reverend only charged $15 a week, and at that price families were expected to pull their own weight. That meant my older brother Ted and I had chores to do, only these chores were nothing like the ones we had at home. At home we had to take out the garbage, sweep the cellar stairs, and mow the lawn. At Jordan’s we were expected to get wood for the old Franklin stove, ice for the icebox, and water from the spring for drinking.

Getting the wood was easy. The woodshed was right in the middle of camp, and at the start of each summer the Reverend would fill it with a truckload of scraps from a dowel factory in Brownfield. We’d walk in, Ted would hold out his arms, and I’d stack them up with dowels. Then I’d pick up as many as I could and follow him back to Little Beaver, our camp. Getting the ice was a little harder. We’d go into the icehouse behind the shed where the Reverend stored the boats, scrape the sawdust off a block, and use the big metal tongs to slide it into the wheelbarrow. Sliding it into the barrow wasn’t that easy, but once we’d managed to get it to Little Beaver, Dad would lift the block into the box. 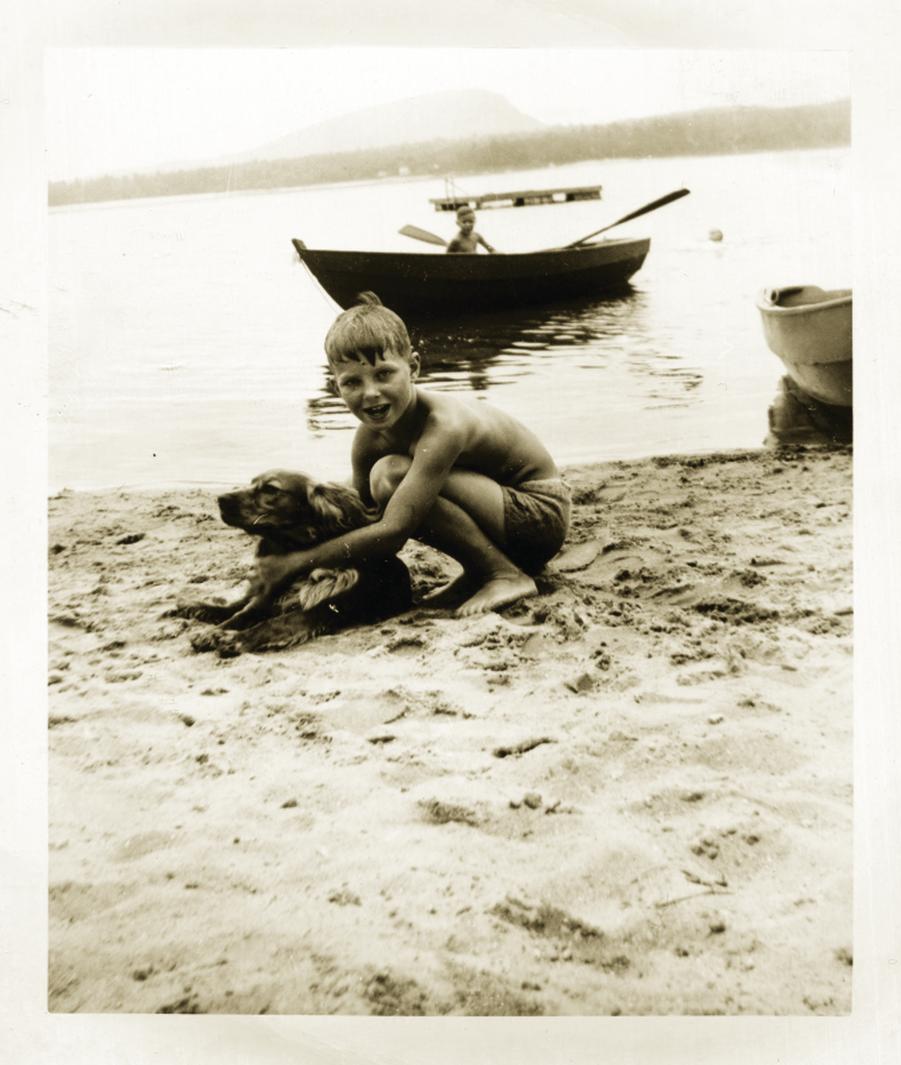 The camps had a nice sandy beach and boats that renters could use. Photo courtesy David E. Morine Getting the water was the toughest because it presented three challenges. The first was carrying the kerosene bottles that the Reverend, an early recycler, provided for going to the spring. Back in the 1950s there was no EPA, so nobody saw anything strange about putting drinking water in a used kerosene bottle, but that was not the problem. The trouble was that the spring was a long third of a mile back in the woods and the way you held a jug was by slipping your index finger through the glass loop at the neck of the bottle. Empty, that was okay, but when the bottle was full with a gallon of water, your finger felt like it was being pulled out of its socket.

The second challenge was that the spring was located at the bottom of a dark, deep, damp hemlock gully that was a breeding ground for deerflies, horseflies, and hordes of mosquitoes, all of whom loved to feast on kids from Jordan’s. When we got to the top of the gully, Ted would say to me, “Okay, Davey, you fill the jugs while I swat the mosquitoes.”

Everyone knew filling the jugs was a lot harder than swatting the mosquitoes, but little kids don’t argue with their big brothers so I never questioned Ted’s instructions. We’d sprint down the path and while Ted flipped back the wooden cover to the spring, I’d unscrew the caps to the four jugs. Then Ted would start swatting and I’d start filling. The water was so clear that at first I’d think the spring was empty, but that misperception would be clarified when a stinging cold shot up my arm. The water must have come from a deep aquifer because it was always freezing.

The kerosene bottles had a neck no more than an inch wide and given the air in the bottles, they’d bob around on the surface unless I forced them down. Glog, glog, glog: bubbles would start trickling to the surface as I felt my hand going numb. Meanwhile, mosquitoes would be swarming around my head, in my hair, over my eyes, up my nose, behind my ears, and covering my bare arms.

Once a bottle was half-filled, it would stay under by itself. Glug, glug, glug. I’d grit my teeth and hold on. One jug, two jugs, three. At last, all four would be filled. I’d jump up, my numb hands flailing around my head trying to clear the biting, buzzing cloud. While I fumbled with the caps, Ted closed the cover. Then we’d each grab two jugs and start up the path.

Now we met our third and final challenge.

With a jug in each hand, we were defenseless. Deerflies and horseflies attacked our heads while swarms of mosquitoes coated our necks and arms. Once out of the gully, we could outrun the mosquitoes, but the deerflies and horseflies wouldn’t give up. Every hundred yards or so we’d have to stop to give our fingers a rest and fight the flies off. It wasn’t until we were back on the screen porch sipping a glass of ice-cold spring water that our chores were done.

Recently while driving through Fryeburg, I was hit with a fit of nostalgia and pulled into Jordan’s Camps. In the early 1970s, the Reverend sold the camps to some of his long-time renters and I was pleased to see that they’d kept them pretty much the way they were, with one exception. All the camps now had their own wells and when I went to look for the spring, I couldn’t find it. The path had grown over and the gully was someplace hidden in the woods. Good, I thought to myself. Going to the spring was the one thing about Jordan’s Camps I’d never miss.

David E. Morine is an author and conservationist. This essay was excerpted from his latest book, Vacationland: A Half Century Summering In Maine, published by Down East Books in 2015.