A celebration of American canoe design

A good boat, well balanced, will appear to find its own way down a river. The scout in the bow picks the route ahead, communicates to the person in the stern with a word or two, and together the pair execute a few well-placed strokes that make the canoe appear to steer itself. 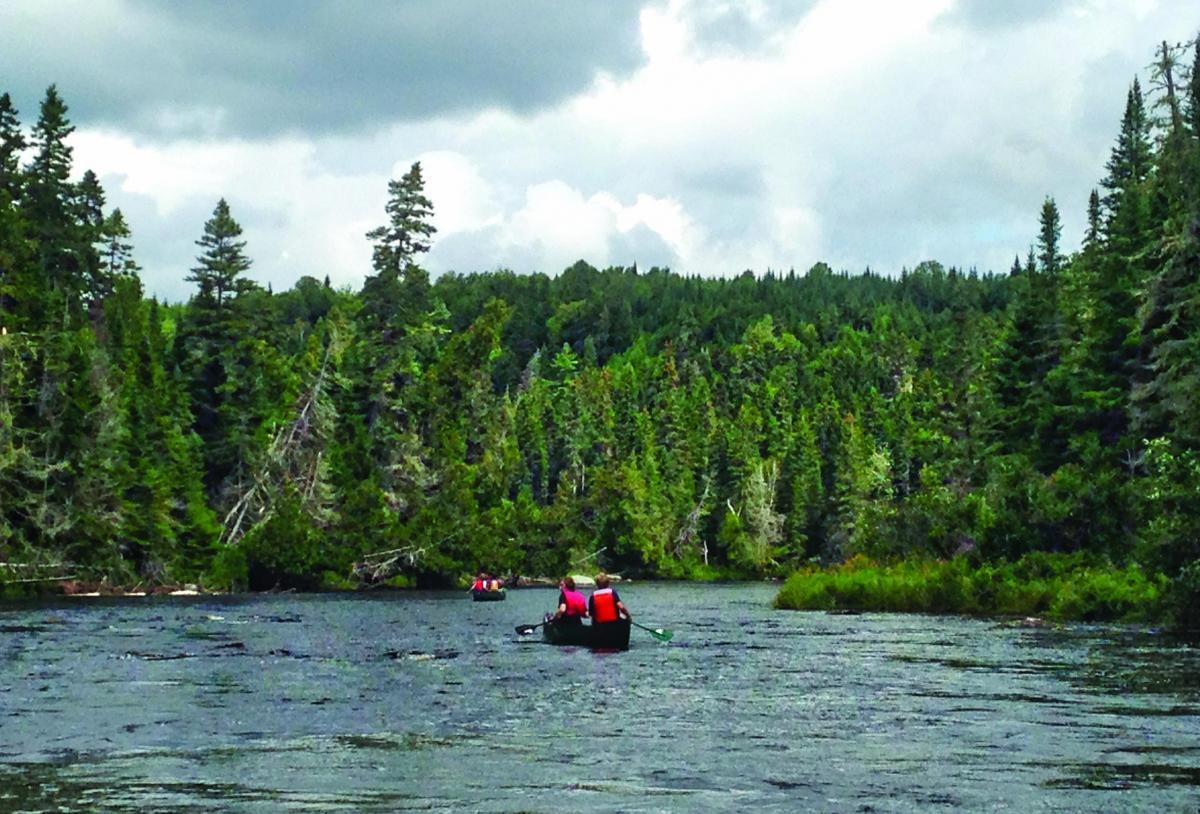 Writer John McPhee described canoeing as “a rite of oneness with certain terrain.” A family trip down the Allagash was all that and more for this author’s family.

The goals are to keep the vessel moving through the water without grinding against rocks, always moving slightly faster than the current or slightly slower, to maintain steerage; and to keep the vessel parallel with the current for maximum control. The boat can glide through a curve, between a pair of partially submerged rocks, or nimbly dance through a set of rapids. A pair of skilled paddlers navigating rapids can make it look easy. Some paddlers wriggle through turns in a Zen-like performance that makes their boat look as alive as they are, thinking and moving in a synchronous dance. What cannot be seen outwardly is the subtle movement of shoulders and hips—the artful precision-placement of a paddle in the current to draw, cross-draw, brace, or pry—that makes it all work, and that flows naturally from the design of the boat itself. 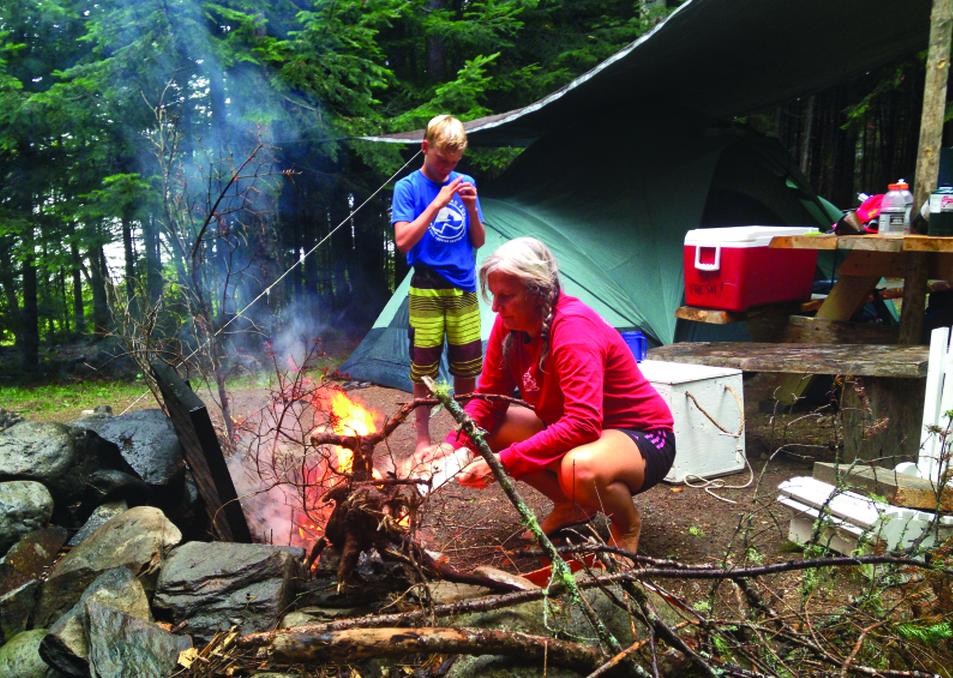 Evenings are spent in front of a roaring fire at well-appointed campsites that dot the river. A good boat, well balanced, containing a pair of inexperienced teenagers, on the other hand, invariably will find itself cross-wise to the current, causing a flurry of panic-induced jerks and leans, quickly leading to the upstream gunwale being submerged just long enough for the boat to fill with water and roll. The teenagers flop out of the boat and into the river as their paddles and shoes head downstream without them. If they’re lucky, the water is warm and relatively shallow. Their parents and friends help them maneuver their swamped boat to the bank and gather up their river-borne yard sale.

This was us last summer. We had just put in below Churchill Dam on the Allagash River. My wife, Leah, and I with three of our children and two of their friends were on a five-day excursion down the river, on what may be one of the world’s most iconic adventures. Over the past 20 years, we have paddled many of New England’s waterways. The routine is always the same. We load our van with food, cooking gear and sundry tools, tent and sleeping bags in rubberized dry bags. Canoe lashed to the roof, off we go, to the Sheepscot, Passagassawakeag, or St. George rivers in April just after ice-out, or in May as the fiddleheads appear; to the Saco in early summer before the appearance of crowds of foul-mouthed, beer-guzzling, floating-toy cretins; or down the Upper Connecticut in October when the campsites are empty.

Until now we’d never paddled the Allagash. Like most things really worth doing, it’s not easy to arrange—it involves long drives on terrible, unmarked roads. But paddling by canoe down the Allagash River in northern Maine, from Churchill Dam northward to the town of Allagash, where it meets the St. John River, is well worth the five-day investment. Like taking a raft down the Colorado or walking the Camino del Norte in northern Spain, it’s an inspiring odyssey. While paddling a canoe down the Allagash you’re paying homage to the indigenous people who first lived here and their boats, whose design literally emerged from the trees around the river many thousands of years ago on a stretch of wilderness waterway that is largely unchanged since the end of the last Ice Age. It is not hyperbole to describe this journey as the perfect union of human ingenuity and one of nature’s finest marvels.

Had Plato been a canoeing enthusiast, he might have described this journey as a celebration of phusis, which can mean alternately “nature,” as in, “the origin of something,” or containing “originating power.” In Plato’s meditation on designing a utopian city, he describes essential virtues that spring from nature, and embody its power, using the term kata phusis meaning literally “according to nature.” Applying this concept to boat design, he might have envisioned a vessel whose shape, materials, and use literally sprang from the surrounding trees. This boat’s power, its kata phusis, derives from its local sources (bark, sap, roots), expertly combined by skilled craftspeople to create a perfect vessel for navigating local rivers in harmony with the flow of the water.

That morning on the Allagash, we were unable to tap our boats’ kata phusis, at least not at first. We clumsily fished the teenagers and their gear out of the water, and, chastened, continued through the rapids toward Bissonette Bridge where we had stashed our camping gear. While a canoe is tricky to handle for a novice, any strong child can get the hang of it in a few hours. All of us, even our teenagers, soon developed the necessary rhythm and were expertly dodging “lunkers,” a term one of us coined for the many hidden rocks that swirled the river’s currents. In my boat, my 12-year-old son Oakley was seated in the bow. He would shout “lunker!” and then claw at the water to nose the boat to one side, away from the rock and into clean water. It was a joy to watch these boys (and one girl) quickly gain confidence and skill, picking their way through the rocks, swooshing through tight little waterfalls, and spinning their boats effortlessly among the swirling eddies. When we reached the bridge at noon, we felt exhilarated by our accomplishment. 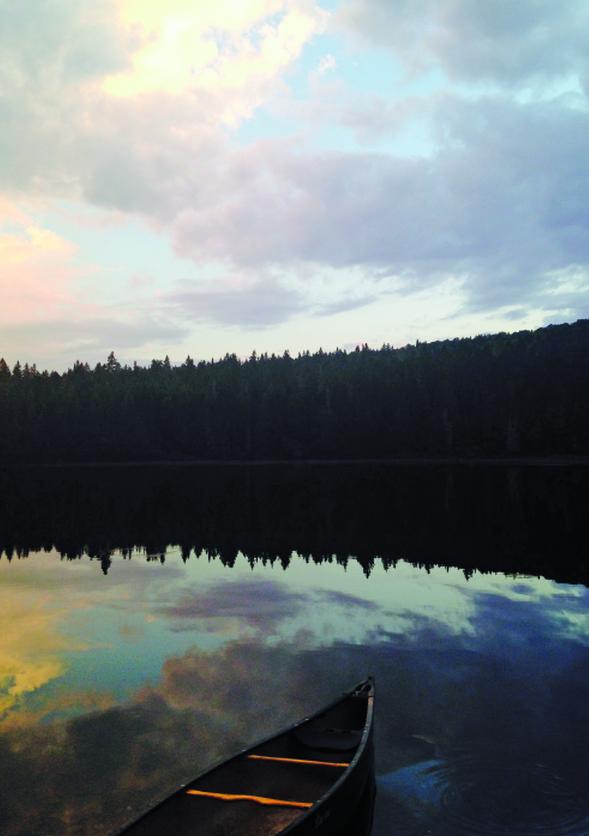 Sunset at Rips campsite. Writer John McPhee did this same trip in advance of writing his classic book, The Survival of the Bark Canoe, in which he shadowed master canoe-builder Henri Vaillencourt from his shop in New Hampshire. McPhee described a passing of knowledge from the Maine tribes of pre-Columbian contact in a direct line to modern historians and a small handful of amateur boatbuilders. By the 1950s, most of the native craftsmen were gone. Today, the kata phusis of native canoe construction and design genius likely resides in the minds and hands of Wellington, Maine, builder Steve Cayard (see page 52), and 52-year-old Passamaquoddy Indian David Moses Bridges, and the many people they have instructed to build boats. A recent documentary, Rhythms of the Heart, by filmmaker Thom Wiley, is a soaring tribute to Bridges and his craft.

For our purposes, we were paddling a variety of 16- and 17-foot Old Town canoes built of Royalex that we rented from Norm L’Italien in the town of St. Francis; he also shuttled us to the put-in. Light and strong, the designs of these boats harken straight from the ancient drawknives of the Wabanaki and Malecite Indians, too.

At one point, when we met up with another group of paddlers at a portage around Allagash Falls, I noticed one of their boats looked like a birchbark canoe. When I looked closer, though, I saw it was a modern version built of Kevlar. Still, it resembled the many boats that appear in photos in the back of McPhee’s book, all built of spruce and birchbark. McPhee: “In a Malecite canoe—the bark ones, anyway—beauty and function each came through at very high levels, and in balance.” You could say the same of these assorted boats gathered on the banks of the Allagash, provided the modern materials don’t offend your aesthetics.

My friend Kirk Niese has paddled the Allagash nine times aboard an Old Town Tripper (a veritable river-freighter) and a Penobscot 16. He is also a canoe racer and modifies his boats for racing by pulling out the center thwart, cutting off a few inches. Then, sucking in the gunwales, he reattaches the now-smaller thwart to decrease the beam-to-length ratio and therefore increase the boat’s downstream speed. But this comes at an expense in overall handling since a proper canoe design really can’t be messed with.

“A canoe’s width needs to be roughly 16 percent of its length,” Kirk told me. “By trimming the beam below this ratio, it’s faster, but it’s tippier. Once I was racing like this on the Upper Marsh Stream. At one point we approached a set of rapids, and I panicked and didn’t brace. We were shooting down the river like a rocket, barely in control, so we ended up rolling and wrapping the hell out of the boat on a rock.” Race over. His favorite river boat is a Penobscot 18, a design that Old Town has discontinued. Kirk describes it wistfully as “a cruise missile that blends capacity with speed.”

Our Allagash trip unfolded with a blissful rhythm. There’s a carefree, casual aspect to canoeing that is unlike other forms of wilderness tripping. Whether your boat is Royalex or birchbark, you don’t have to worry excessively about weight. McPhee writes: “A canoe trip has become simply a rite of oneness with certain terrain, a diversion of the field, an act performed not because it is necessary but because there is value in the act itself; and what you take along depends on what you can afford…and on how you see yourself in the setting.”

We stopped each afternoon at one of the many well-appointed campsites that dot the river at regular intervals—with the river virtually to ourselves. We strung a tarp between the trees to keep off the dew and the occasional rain shower, set up the tent, and built a roaring campfire at sunset as the kids goofed off in the water or the surrounding woods. Each morning we shoved off and glided effortlessly along in the current. With the exception of the few small lakes in this section of the river, the Allagash current keeps you moving such that, at least when there’s no headwind, you can mosey along at an easy pace.

In a good boat, well balanced, it really is easy just to grab your gear, load the boat with an eye toward trim, and head off down the river—teenagers and all.

Twain Braden is a maritime and admiralty attorney based in Portland, Maine.