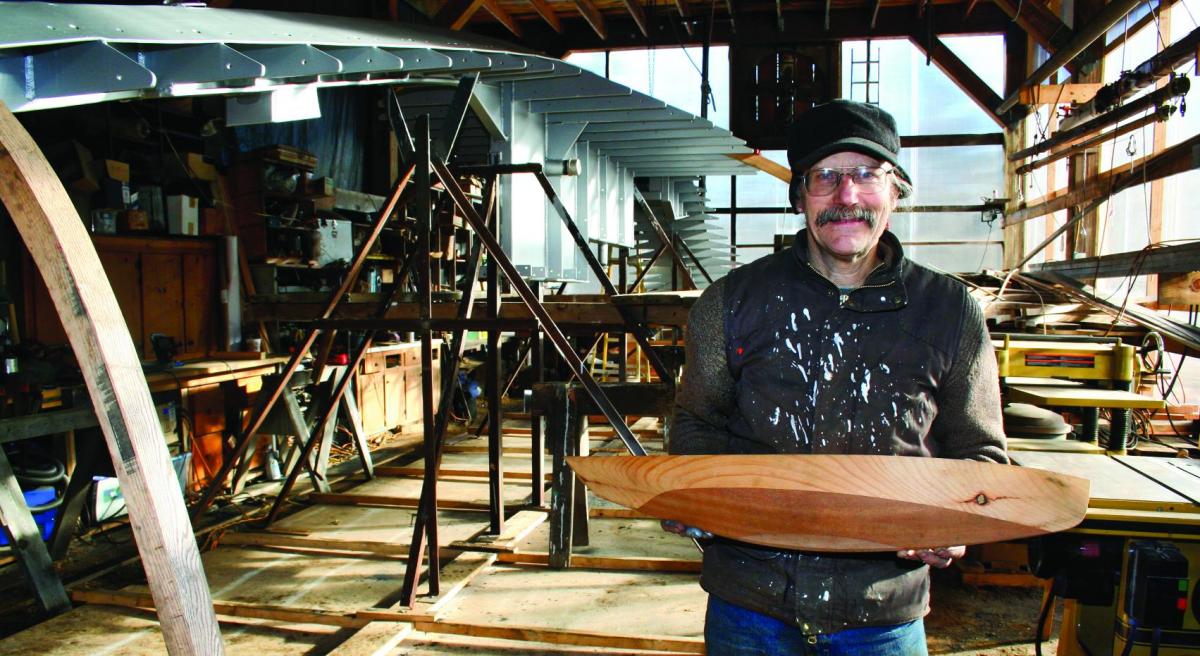 Boothbay boatbuilder David Stimson holds a model of his steel-backboned wooden schooner. The actual boat is shown under construction behind him.

On River Road in Boothbay, David Stimson and his sons, Abraham and Nathaniel, are building a 43-foot-long shallow-draft centerboard wooden schooner fitted with a steel backbone.

“Excuse the mess,” Stimson said as I entered his barn-like shop. The cavernous building looks industrious rather than messy—the dirt floor covered with sawdust and stacks of live-edge oak and white pine in back.

For 40 years, Stimson has specialized in the restoration and repair of classic boats, as well as the design and construction of small wooden craft—skiffs, rowing boats, catboats, a war canoe, a motorized dory, schooners, and some nifty, lug-rigged 15-foot daysailers that he built for Pine Island Camp and calls Bezumarangs, inspired by Bezuma, one of the summer camp’s “sacred animals.” He also builds and repairs violins.

“You’d be surprised how many boatbuilders get into violin-making, especially as they get older, when planks are not as light as they used to be,” said Stimson, who keeps warm in a wool earflap hat and paint-splashed vest, and has a nice smile and quiet demeanor. 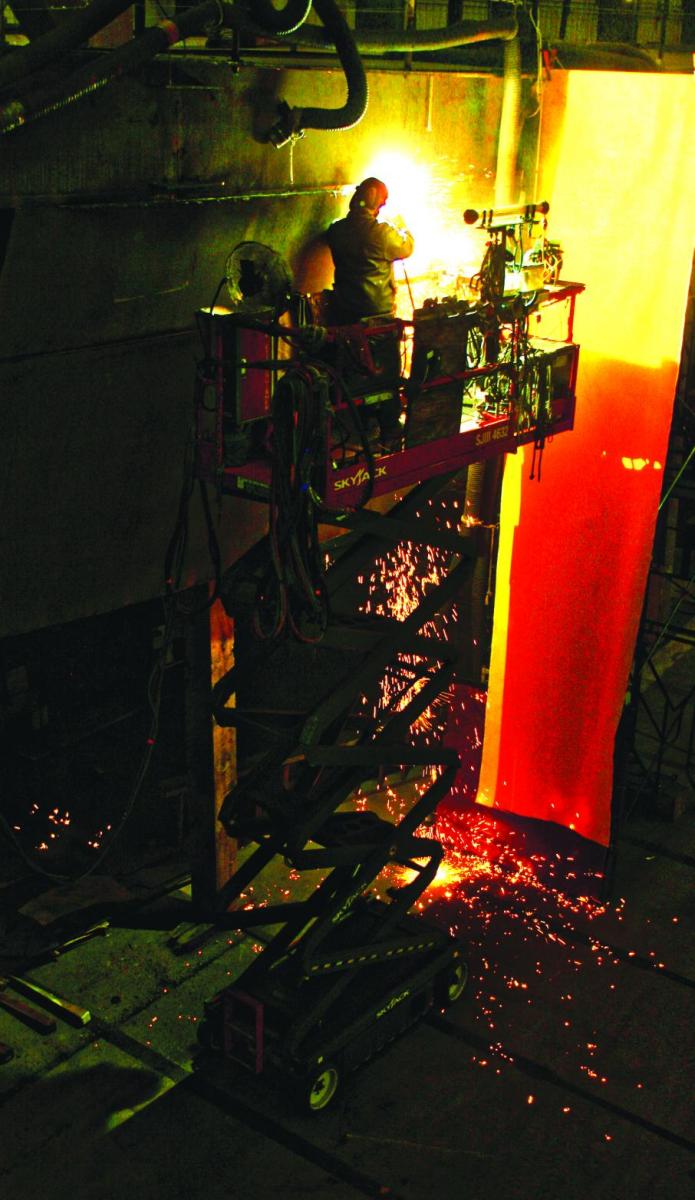 At Washburn & Doughty in East Boothbay, sparks fly as a welder joins together steel plates in the making of a 100-foot tugboat. Tools collected over many years include a set of planes based on a century-old design. Strings of tobacco hang to dry from the rafters—Stimson grows his own for pipe-smoking. The feel of this shop is semi-traditionalist; not exactly back-to-the-land, but tucked into the woods where, harking back to days of yore, Stimson harvests and mills his own lumber and builds along classic lines.

It seems fitting to find this quiet business off a rural peninsula road that eventually winds its way to the ocean. Stimson’s operation evokes traditions rooted in the past, while also looking toward the future. The same can be said of other boatbuilders in the Boothbay region, where the variety and concentration of activity is astonishing for such a small, fairly remote collection of villages.

On this peninsula, flanked by the Damariscotta and Sheepscot rivers, boatbuilding’s roots go back to a time of large fishing fleets and busy coastal trade. Today, the industry has expanded to include construction of pleasure boats. In all, the many boatbuilding operations in the region, both large and small, combine to employ scores of people, and attract a clientele that ranges from local to global.

Builders run the gamut from one- or two-person shops such as Matt Sledge’s Samoset Boat Works and Stimson’s shop, to semi-industrial plants such as those encountered closer to the water below a narrow network of lanes in East Boothbay. There, Hodgdon Yachts goes back 200 years—the sixth generation of the Hodgdon family now works at the yard. On the day I visited last winter, specialists in carbon fiber, Kevlar, and Nomex honeycomb core were testing, fairing, and fitting various elements for an advanced-composite yacht under construction.

Next door at Washburn & Doughty, the buzz of TIG torches and plasma cutters reverberates through a 43,000-square-foot factory, and sparks fly as welders on scissor-lifts join together huge plates of steel in the making of hundred-foot tugboats. 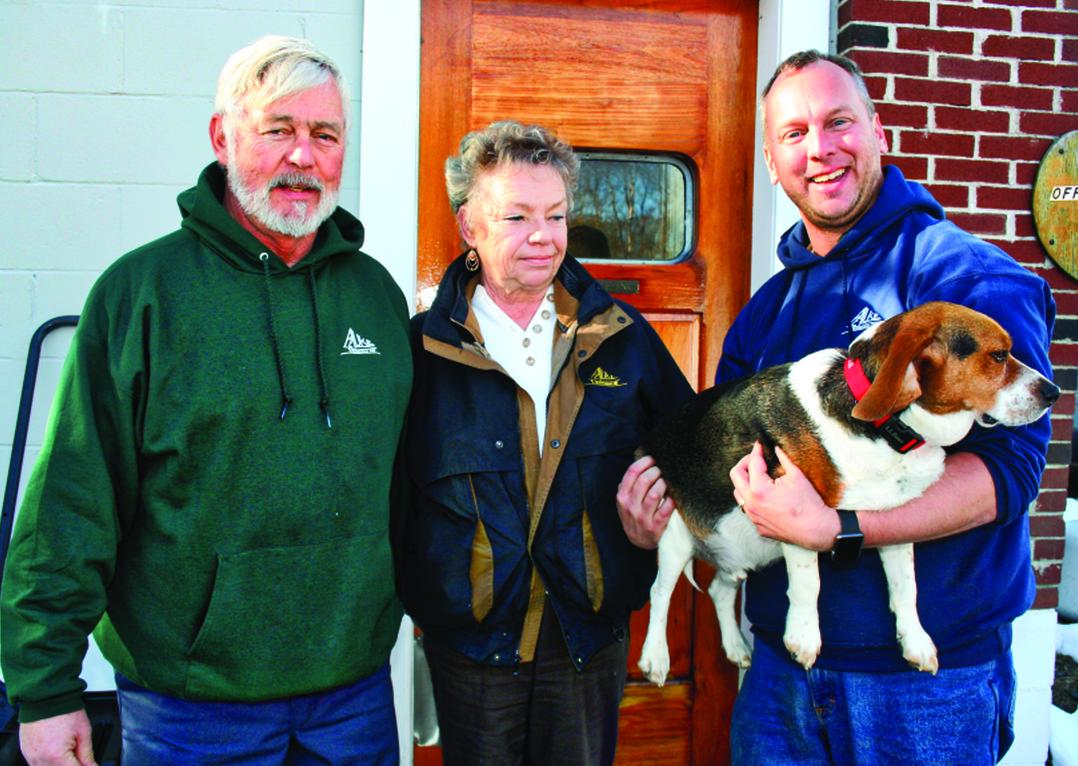 From left, Frank and Nora Luke, second-generation owners of the Paul E. Luke shop in East Boothbay, and their son, Andrew, who is taking the yard into the future with help from Cosmo, the boatyard dog. A farther jaunt down a steep driveway that ends in the appropriately named Lukes Gulch leads to Paul E. Luke, Inc., a third-generation company. Here, in a jumble of buildings that hints at nearly 80 years of history, a vintage Hinckley 49 sailboat is in for layout and systems updates, while a roster of other boats waits its turn for routine winter maintenance.

Return to the west and find the Boothbay Harbor Shipyard, home for the next three years of the Ernestina-Morrissey, a 156-foot-long fishing schooner built in 1894 in Essex, Massachusetts. Later employed as an Arctic expedition boat and then as a Cape Verde packet, the Ernestina, which is one of the nation’s most historically significant ships, is undergoing a $6 million, multi-year restoration.

From traditional to modern, these new builds and restorations are just a few of the boatbuilding projects in the Boothbay region.

By the waterfront, Boothbay Harbor is a popular tourist destination. A spaghetti-network of lanes and vintage homes speaks of history, while the downtown is lined with trendy restaurants and shops. Southport sits on the west side of the harbor. To the east and separated by a promontory are Linekin Bay and the town of East Boothbay. These small towns have a quieter, residential feel. North of Boothbay Harbor is the separate municipality of Boothbay.

In the 18th and 19th centuries, fishing and shipbuilding were two of the area’s lead industries, eventually joined by tourism and industrial enterprises such as seafood canning, according to Barbara Rumsey, a local historian with the Boothbay Region Historical Society. Boatbuilders came and went. At the heart of the Boothbay Harbor shoreline, mid-19th-century Townsend Marine Railway became the Atlantic Coast Company, then Sample’s Shipyard. Today it is the Boothbay Harbor Shipyard. In East Boothbay, Adams Shipyard became Goudy & Stevens, then Hodgdon Yachts. Washburn & Doughty, which specializes in building tugboats, is at a site formerly occupied, at different times, by the Rice Brothers and Edward Gamage. Two other Gamages started an eponymous boatyard that’s still thriving across the river from East Boothbay in South Bristol.

Jimmy Jones knows about changes. His grandfather started a shop in East Boothbay. His father and uncle took over, followed by Jones, who closed down and went to work at Sample’s. Not long ago, Mike Mayne, owner at the time of Edgecomb Boat Works, a restoration shop a few miles inland, bought the Jones property. He now operates under the name Little Island Boat Yard LLC, resurrecting the yard to continue its legacy in wooden boat work and service work for local lobstermen.

Jones himself now works at Hodgdon; when I visited he was chiseling a rabbet in the forward section of a 1955 Abeking & Rasmussen in for a major refit. I met him while touring the company with fifth- and sixth-generation owners Tim Hodgdon and his daughter, Audrey.

“I was tired of running a business,” Jones said of his decision to sell. “I was able to walk away, so I did.”

While Jones worked on a traditional plank-on-frame restoration, others at Hodgdon were working with the latest composite materials. The yard produces superyachts, from a 124-foot sloop equipped with a custom pipe organ and functioning fireplace to the sleek hundred-foot super-maxi Comanche, built from carbon fiber pre-impregnated with resin, then “baked” in the biggest marine oven in the United States. The Hodgdon crew built the “oven” inside a huge shed onsite. Tim Hodgdon introduced me to composite technician Sarah Boston, who tapped with a bulbed rod on a carbon fiber part, listening for bonding imperfections. Elsewhere, Chip Haggett, a joiner who “grew up in the shavings,” was inspecting a teak tabletop he crafted for a 65-foot modern classic under construction at the shipyard. 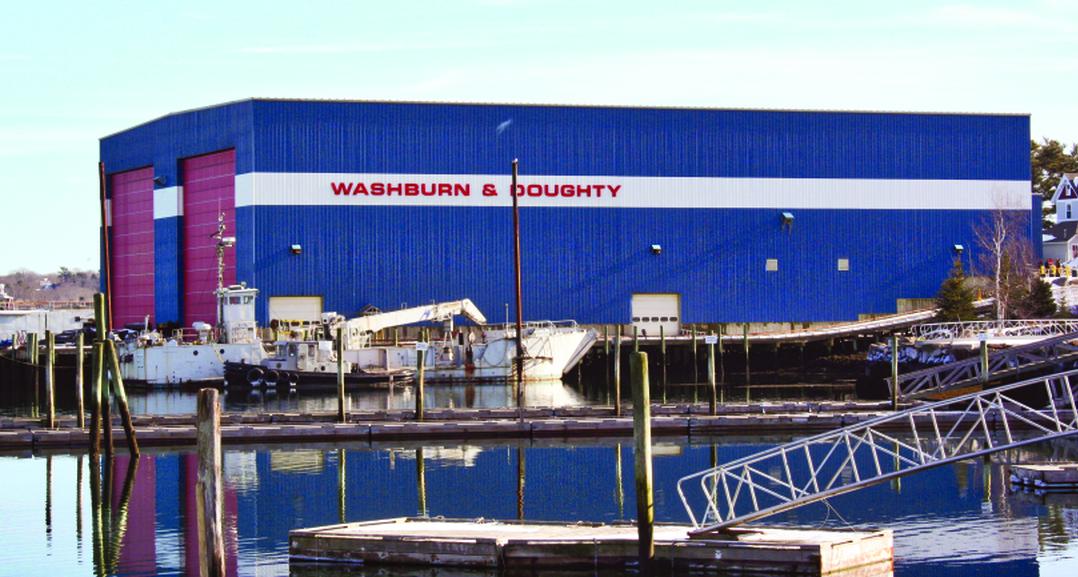 The Washburn & Doughty plant, viewed from Ocean Point Marina, overlooks the Damariscotta River. Next door, Washburn & Doughty has a whole different scene going on. Matt Maddox, vice president of finance and son-in-law of co-founder Bruce Doughty, equipped both of us with hardhats and took me onto the floor. A nearly hundred-foot tug, to be outfitted with two 3,000-horsepower engines, loomed overhead. A big plate of steel was being cut on a computer-controlled plasma burn table; tractors and come-alongs hauled the plates into place. The incessant noise of heavy machinery forced us to shout to be heard. Maddox noted that the company works hard to provide steady work throughout the year, avoiding the boom-and-bust cycle that plagues other sectors of the industry.

“A lot of our people have been shipbuilding their whole lives, and they take a lot of pride in putting out a great boat,” he said. “It’s nice being part of a boatbuilding heritage, especially in a small community.”

Nearly 80 years of heritage are alive and well at the Luke family’s shop, which no longer builds boats but still offers storage, service, repairs, and refits. On first glance, it’s hard to tell that this hodgepodge of buildings is a boatyard, especially because there’s no sign. Then I noticed a tubby pooch leashed near a door that seemed to speak “office.” Inside, second-generation owners Frank and Nora Luke, and their son Andrew, were catching up on paperwork. Frank recalled the old days.

“They built a lot of boats on a handshake,” he said. “You can’t do that now. The fellows were just back from World War II, and there wasn’t anything they couldn’t do or wouldn’t try, and it was fun.”

Frank father’s Paul worked for the Rice Brothers, Gamage, and Frank Sample at different times in his career. Paul and his wife Verna started the Luke yard in 1939. It was known for wood and aluminum construction, and developed a well-equipped machine and metal shop, producing everything from small-boat cleats to grinders for America’s Cup boats, plus galley stoves, and automatic feathering propellers. In the 1980s, the Lukes fabricated the cherry for Claes Oldenburg’s oversized sculpture “Spoonbridge and Cherry,” at the Minneapolis Sculpture Garden.

Oldenburg “knew he wanted to make this enormous sculpture, and he knew it would be aluminum,” Andrew said. “He asked himself, ‘Who knows how to work aluminum?’ Boatbuilders do.”

Andrew guided me through a warren of walkways, doors, and ells, past half a century’s worth of machinery and scrap materials blanketed with dust.

“My grandfather never threw anything away, because he was of that generation where you save everything,” he said.

Nowadays, the Lukes have upgraded their storage and service yard. Frank and Nora are stepping back, but they remain invaluable.

“My mother is good with names, my father is good with boats. Between the two of them, it’s perfection,” said Andrew. He then summoned an observation true of the entire community: “That sense of history at their fingertips is profound.” 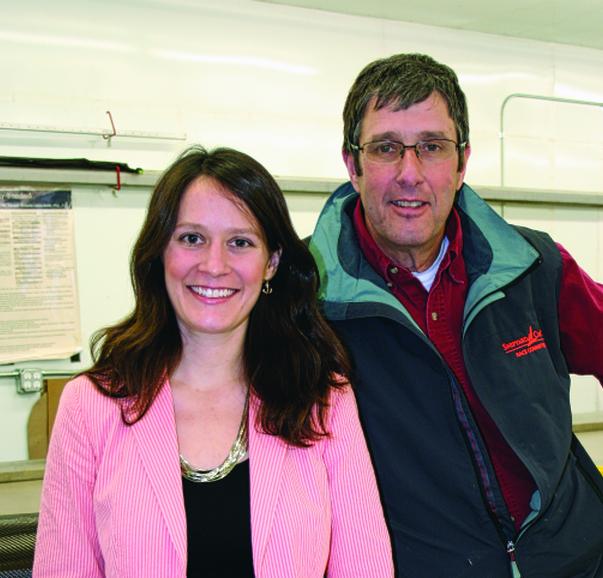 Audrey and Tim Hodgdon The Hodgdon family has been building boats since 1816 when Caleb Hodgdon launched a 42-foot pinky schooner in East Boothbay—making the family the nation’s oldest in the boat business. Tim Hodgdon, the company’s fifth-generation owner, and his daughter Audrey are planning festivities to celebrate the yard’s bicentennial this summer.

“It’s an important legacy and I’m proud of it,” said Tim Hodgdon, who started working at the yard during school vacations in 1971. He officially joined the business in 1979, when construction involved traditional wooden plank-on-frame and the workforce was four or five people. Audrey joined the company last year. “In this business, you need to embrace technology. We’ve done that,” Tim said. 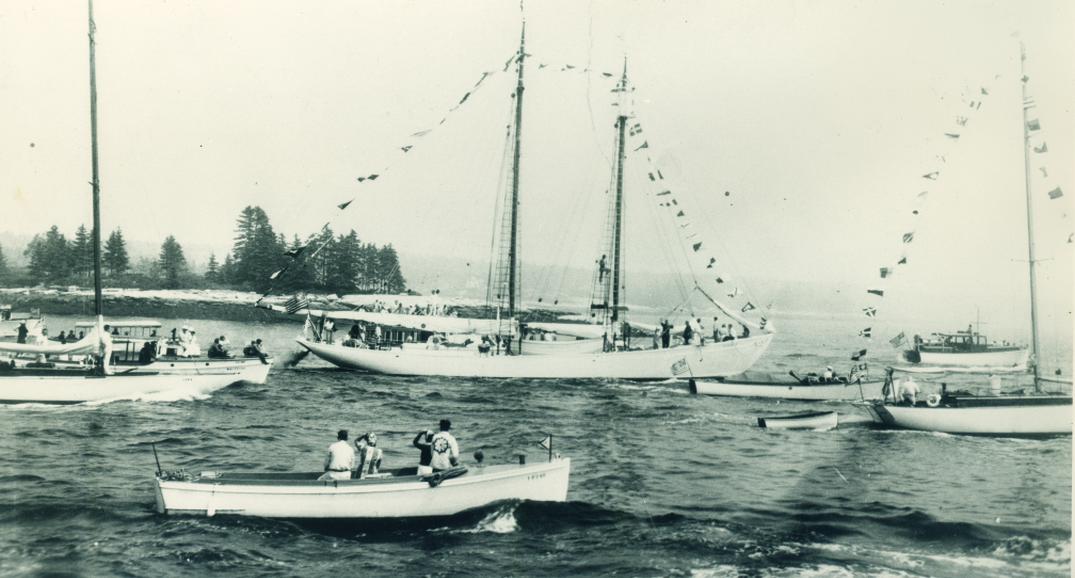 The 1921 launch of the schooner Bowdoin was cause for a celebration. Courtesy Hodgdon Yachts

In the early years, the Hodgdons built fishing boats and schooners, such as the William Hand Jr.-designed Bowdoin, (shown here on launching day in 1921). The business has grown and become more sophisticated, using the latest materials and technologies and expanding to serve clients all over the world. A recent project was the high-tech, high-speed ocean racer Comanche. The company’s divisions include a sales office in Monaco. —LS

For more information on the birthday celebrations, contact Audrey at 207-633-4194 or info@hodgdonyachts.com.

Laurie Schreiber has written for newspapers and magazines on the coast of Maine for more than 20 years. Her new book, Boatbuilding on Mount Desert Island, was published in April 2016 by Arcadia Publishing.