Letters to the Editor 139 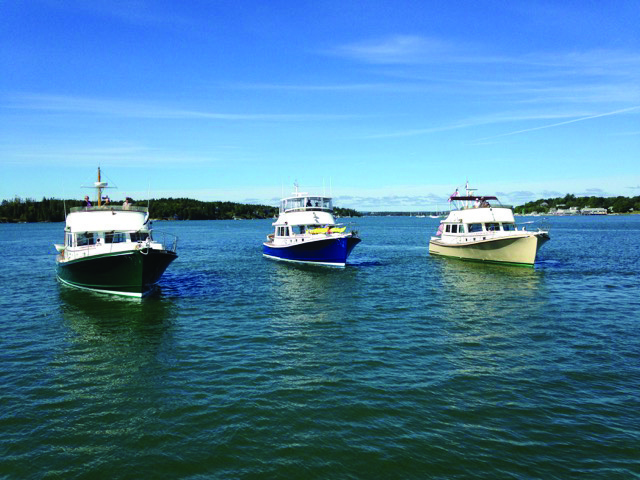 I write to tell you of a unique and rather unusual coming together of three boats last summer in the Fox Island Thorofare. In 1988 I rescued a Jarvis Newman 46 in Bar Harbor after it made a crash landing under the helm of the previous owner. She had been taken as a bare hull 10 years earlier from Southwest Harbor to Maryland to become one of three beautiful lobsteryachts built by Frank Hardy.

I had lost track many years ago of the other two vessels, and was pleasantly surprised about five years ago to find #2 happily swinging on a mooring in Buck’s Harbor. Last summer a friend, who was enamored with our Hardy boat, tracked down #3 only to find that she was for sale. He made the purchase. While our two boats were cruising this summer on the Castine Yacht Club Cruise, by a simple quirk of fate, we came across the third Hardy boat from Buck’s Harbor coming through the Fox Island Thorofare. The three hulls were reunited after more than 30 years at sea. A photo taken that day shows the boats, left to right: Roaring Bull, Searsport; Persistence, Castine; and Frolic, Castine (my boat).

I guess eventually everyone comes home to Maine.

In the mid-1970s I singlehanded my 22' sloop from Scituate, Massachusetts, to Bar Harbor, Maine. Pulled by the lure of Matinicus, I sailed the “outside” route of the Isles of Shoals, York, Wood Island, Seguin, and Monhegan to Matinicus. After a few days at Matinicus I sailed to Lunt’s Harbor, then to Northeast, Somes, and Southwest Harbors before reaching Bar Harbor. It was a thrill to get a photo of the Harvey Gamage exiting Western Way!

The return trip from Bar Harbor took me to Bass Harbor and through Casco Passage to Naskeag Harbor, challenged by 50' visibility, and on to many harbors along the mainland coast. The adventure is still vivid today, 40 years later.

MBH&H is like a vessel that brings me back to the Maine coast and the people and places (and fog) that are real and down to earth. The challenges, beauty, and sense of accomplishing something come through the pages.

I still feel the lure of Matinicus. Perhaps I will sail there again! An article about Matinicus is the first thing I look for when the magazine arrives.

Your current issue is terrific.

Flipping through the January/February edition, I was stopped short by the full-page aerial photo of Matinicus/Ten Pound/Criehaven. What an arresting shot! And its accompanying piece honoring Kevin Waters and his Penobscot Island Air crew was perfect. No one deserves it more.

The visual indexing in the Table of Contents was the perfect introduction. And the Awanadjo Almanack, with the chipmunk carrying a seasonally appropriate football….okay, okay, some will say it’s a nut. Nuts to them.

Foggy was fascinating, though I hate finding myself caught up in the dreams of gazillionaires. Comes with the territory, I guess, given the skills of Maine’s boatbuilders. But maybe you could add more about life-in-the-workboat lane.

Anyhow, a great issue from a magazine that keeps growing. Congrats!

“If you can’t say something nice, don’t say anything at all....”

I want to congratulate you on a really terrific edition (MBH&H January/February)—especially the great piece you wrote on Grampus. I was particularly pleased to see that your publisher considered it to be one of the most intriguing vessels in the magazine. Indeed, it is publicity like this that helps Bigelow Laboratory for Ocean Sciences consistently meet our admittedly ambitious philanthropic goals.

In addition to our unrestricted donations last year, we also raised $7 million in donations to fully fund and endow a new 15,000 square foot student and visiting scientist residence.

For me there is just no better place to spend a summer than on the coast of Maine. If one goes far enough up U.S. Route 1, there is found a stretch of pristine coastline not crowded with people even at the height of summer travel season. Just 100 miles south at Bar Harbor and Mt. Desert, the roads, hotels, and restaurants are wall-to-wall bodies and autos.

Those of us lucky enough to have found this secret place lovingly refer to it as, “the frontier.” It’s a challenge just to get here, and when you finally make it, services are scarce but hospitality and beauty are abundant!

My wife who recently succumbed to pancreatic cancer got to spend her last few months alive in what to us was “near heaven.” This is in memory of my wife: Sandra Lynn Rosser, 1949-2015.