“We are one of the only air-taxi services of this kind in the Lower 48. I don’t know of any others that provide the range of services that we do,” said Penobscot Island Air President and Chief Pilot Kevin Waters, with pride. 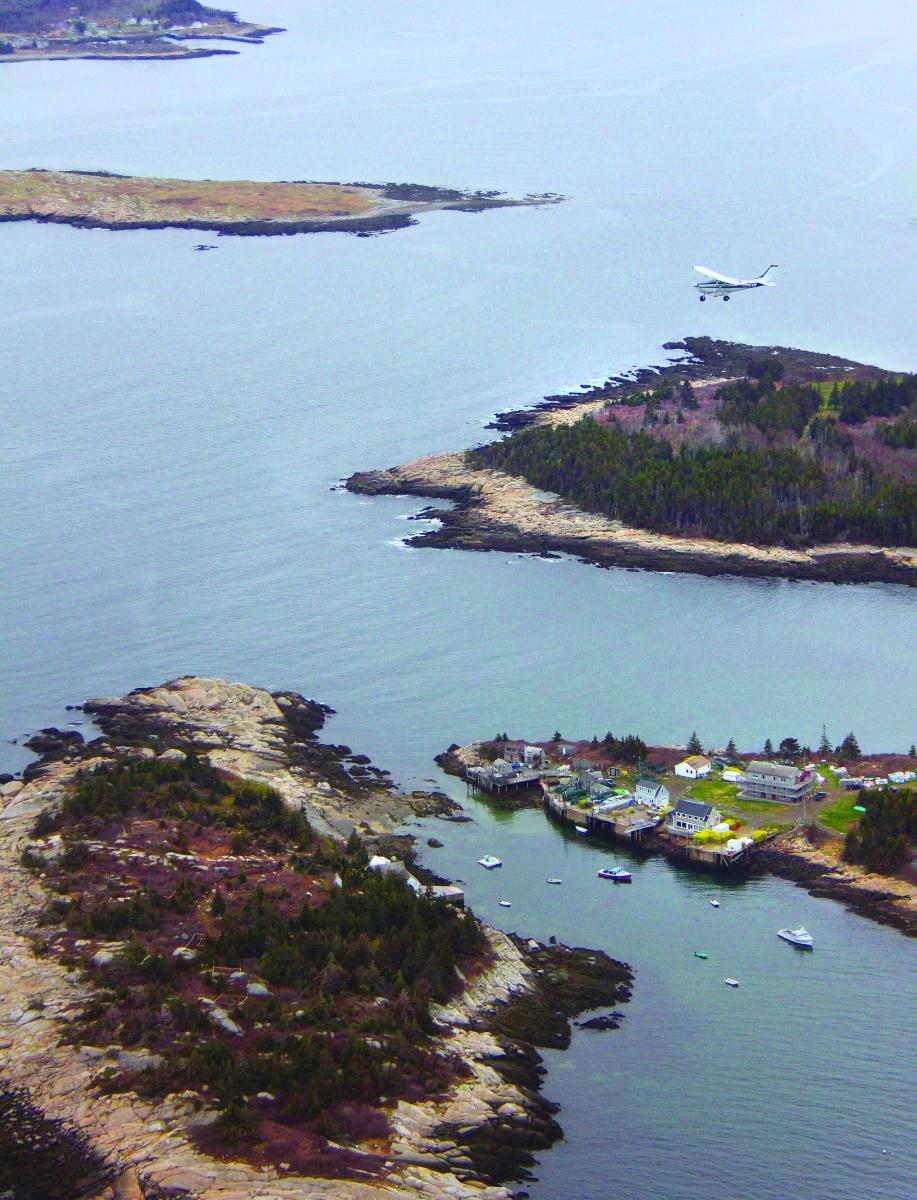 Penobscot Island Air’s Cessna 206 flies over Matinicus, with Ten Pound Island and Criehaven in the distance. Waters has a right to be proud. His company has what could be an overwhelming task: The summer team of 14 pilots and seven staff (this drops significantly during the winter months) serve the watered edges of the easternmost U.S. state, including nine island towns whose year-round populations range from less than 50 to nearly 1,500. The company’s flyers are essentially bush pilots, taking off and landing five Cessnas mostly on grass and turf, less often on paved airstrips. They have a collective 275 years of experience and 100,000 flight hours.

Similar to Alaska where single-engine planes and their cargos are lifelines to remote areas, Penobscot Island Air reduces the economic and personal risks faced by islanders. Their service helps islanders maintain their treasured independence and allows them to live in these stunningly beautiful yet less accessible places.

Penobscot Island Air delivers mail to four islands and groceries to five, flies in law enforcement as needed, and provides medevac service in a complement to LifeFlight of Maine’s medical helicopters. In 2014, PIA delivered 380,000 pieces of mail and 580,000 items of freight, numbers that increased by 15% for mail and 20% for freight during 2015. While Penobscot Island Air’s top priorities are postal, commercial, safety, and health, the company ramps up piloting resources in the summer to help vacationers eke out every moment of precious island time. While no babies have been born in the air yet, Senior Pilot Ted Westlake said PIA has flown two women in labor off islands in separate incidents. 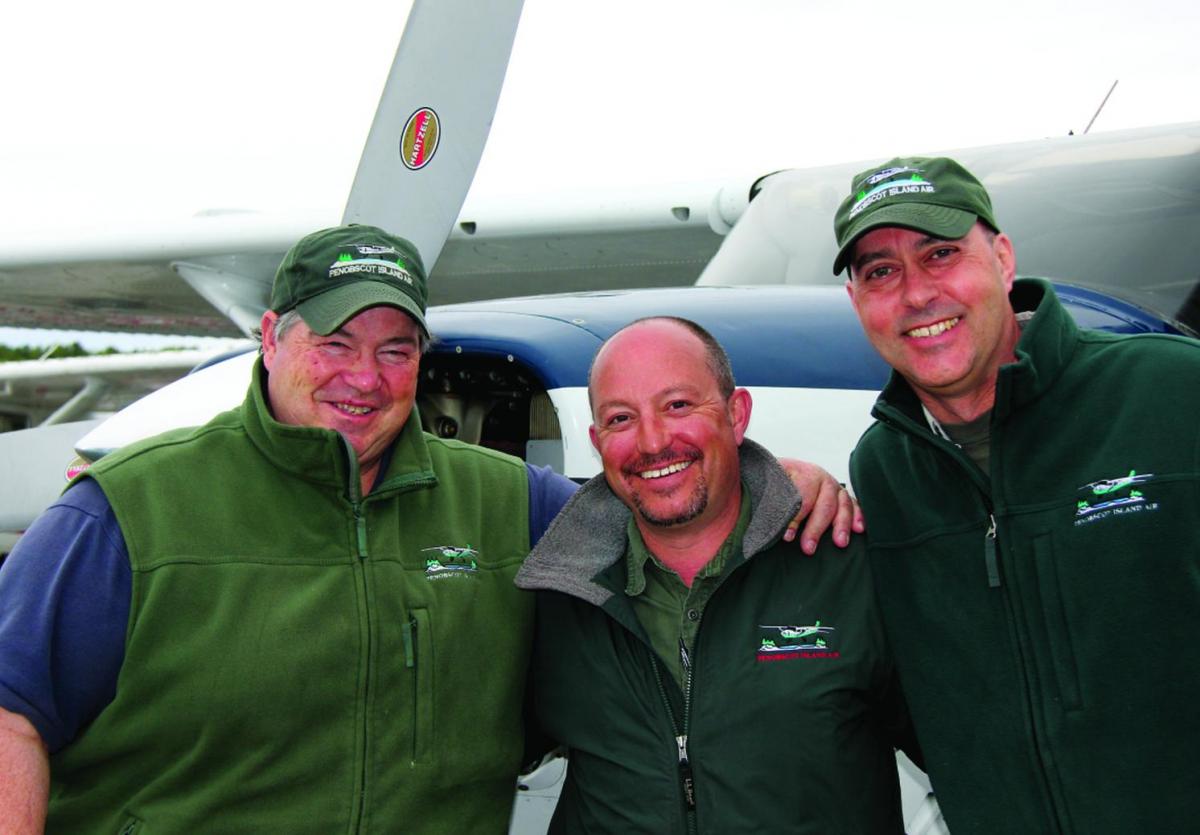 Founder, owner, chief pilot, and president Kevin Waters (left) with pilots George Alexander “Bud” Haines (middle) and Michael Wade McFalls (right) at PIA headquarters at Owls Head. Rescue operations include the non-human kind as well. Criehaven residents discovered an abandoned seal pup along the shore a few years back. After quickly obtaining the required permits, these concerned citizens engaged PIA as the most expeditious resource for transporting “Milk Dud” to the University of New England’s Marine Animal Rehabilitation Center, from where he was later successfully released.

The planes are sometimes grounded by storms or heavy fog—a favorite phrase among Maine coast flyers is “It’s so foggy out there, even the birds are walking.” Sometimes, though, the planes provide a lifeline when other means fail. 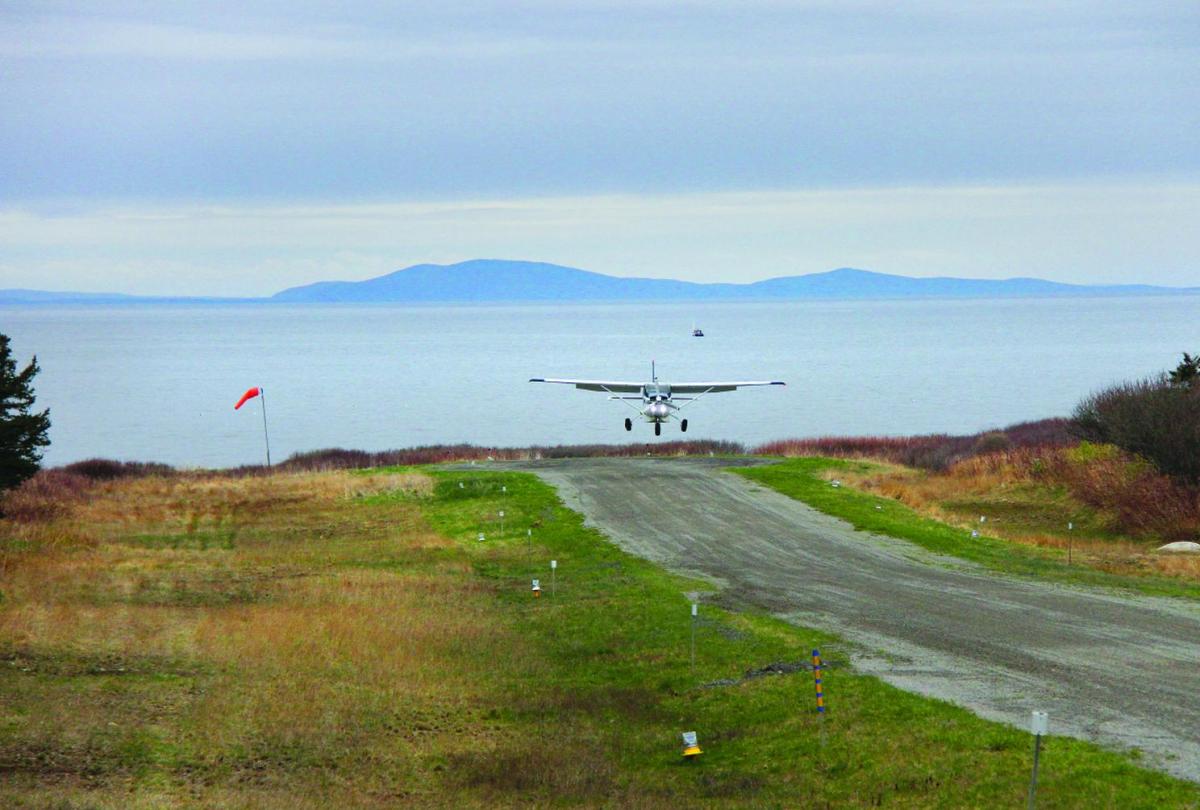 Pilot Haines maneuvers onto the 1,700-foot gravel airstrip on Matinicus, with the Camden Hills in the background 25 miles away. Last winter, when ice on the Fox Island Thorofare prevented educators and a postmistress from commuting between Vinalhaven and North Haven by boat, PIA flew the inter-island professionals back and forth between home and work until the ice thawed and the Thorofare became safe to cross by water.

With a year-round population of about 40, Matinicus is one of the smallest and the farthest regular destinations for Penobscot Island Air. Paul Murray, an electrician who operates the power company equipment on Matinicus, explained, “The ferries can’t do what PIA does. There is just not enough traffic to justify more boat runs. Air service is the answer for us.” Murray added that PIA, the state ferry, and Matinicus Excursions all “fill a particular slot” in the way Matinicus islanders live. 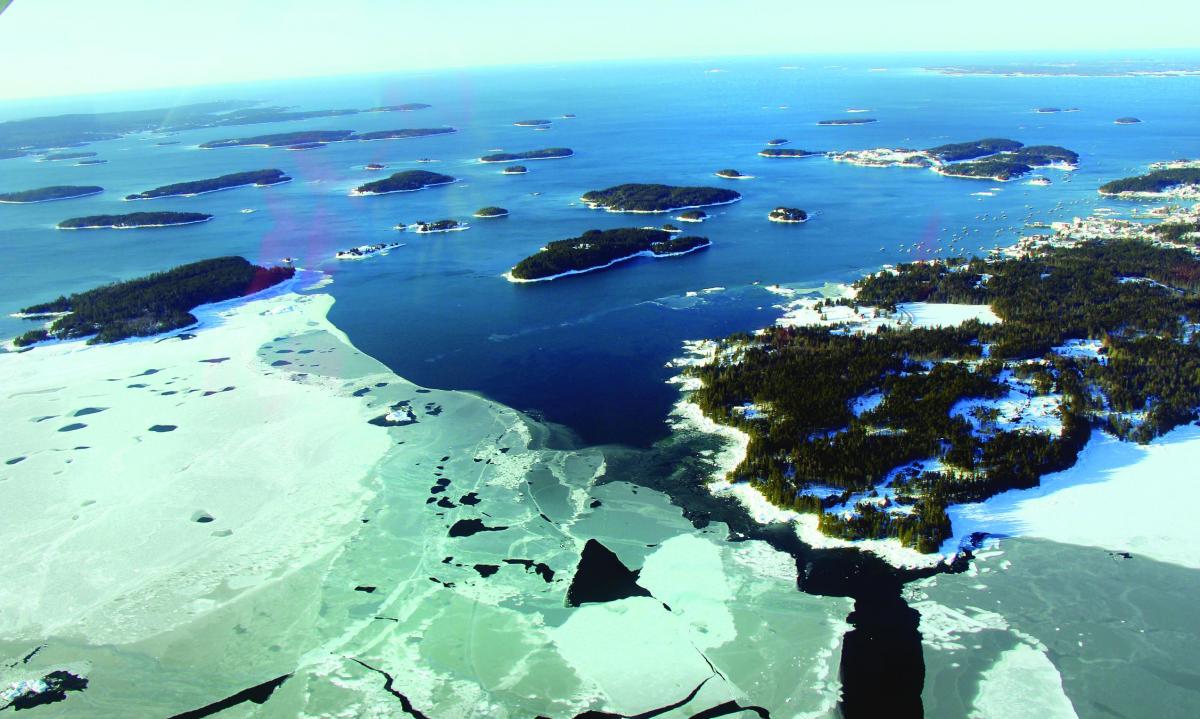 Finishing construction jobs during Maine’s intense building season means island contractors can steadily employ more people both on and off island. Cooper Construction of North Haven is one of 173 island companies supported by Penobscot Island Air.

“We probably, on average, fly in at least four or five different subcontractors during a building season,” explained Roman Cooper, co-owner of Cooper Construction. “By flying you can come in at 7 a.m. and leave at 5 p.m., so PIA allows us to have subcontractors who can actually put in an eight- to ten-hour day…  PIA makes it feasible for us to be on time, and on budget.”

Some air transport needs are regular and mundane, others unique and unpredictable.  What is certain, though, is that there are dedicated pilots in harbors, on landing strips, and crisscrossing through the sky, all supporting the communities at Maine’s eastern edges.

Kate Taylor is a global business consultant, writer, and photographer. Ellard Taylor is a builder, woodworker, and (non-PIA) pilot.  Four of the Taylor’s five sons live in Maine.