Paddling during a Penobscot Bay gale

My 17-foot stand-up paddleboard was planing. The GPS unit that I had duct-taped to the deck was pinned at 15 mph (13.04 knots). While my paddle blade skimmed over the cold November seas, I crouched in a surfer stance near the tail of the board and held on.

For almost a minute I rode that wave for all it was worth. A quarter mile inshore, the bell buoy off Curtis Island screamed by. It clanged with a frenetic energy. A dark squall line dropped over Mount Megunticook and swallowed Camden Harbor. I lost sight of two ominously named waypoints along my route: offshore, a pile of rocks called the Graves, and, inshore, Deadmans Point, which marked my initial turn toward Rockport Harbor and relative safety. Visibility dropped to maybe 100 yards. The rain pelted my face and drysuit. I was alone in the maelstrom.

Then the wave lost its power. Stepping forward, my left foot made contact with the paddleboard’s steering system, and I adjusted my course slightly. Everything slowed. My carbon board wallowed and it became difficult to balance. Each stroke felt as though my paddle was embedded in concrete. Working up to a short burst of sprint strokes, I accelerated on a fresh wind wave, the SUP planed again, and stability returned. My legs rooted and my body relaxed. I raced over several more wave trains like this and sped on down the bay.

Penobscot Bay is a wild and rugged place to paddle during a November gale. It is unforgiving, but also beautiful in an awesome sort of way. Standing on the shoreline provides anyone a vantage point to witness the power of Mother Nature. You can see the white spray blowing off the wave crests, and you can feel the hammer-like effect of water and wind pounding the rocky coastline.

But to be out in it, especially on a paddleboard, is entirely different. Instead of just bearing witness, you are engulfed. You are a part of “it.” You experience every wave and every gust of wind. You taste every form of moisture, whether from the ocean or the clouds. On a paddleboard in those conditions you go with it. Going against it is not an option.

The term “downwinder” in the SUP world refers to keeping the elements at your back. This is not casual paddling on flat water. Rather it is open-water surfing. The gear for this form of stand-up paddling is high-tech and specialized. The boards are long, generally 15' to 18' and slender, around 26" wide. Downwind boards often have active foot-controlled steering, which affords the paddler more control.  When you let go with your foot, the rudder snaps back in line and acts more like a traditional fin.

The board shape encourages speed off a wave and the long waterline allows you to carry that speed from one wave (or bump as it is called) to another, maximizing every nuance of the waves. It requires strength, endurance, balance, and in cold water/weather, the ability to suffer. Downwind paddling is like backcountry skiing, except it is like going uphill and downhill at the same time. The paddler constantly has to pour on bursts of high-cadence strokes to get the board to accelerate and then lay off while the board surfs on wave tops. It is a constant cycle: paddle hard, relax, paddle hard, relax.

I have done a lot of sailing and kayaking in all conditions. What I appreciate most about downwinder SUP is just how dynamic it is. You are not locked into any position. Your body has to flow all over the board. Larger oxygen-depleting muscles must work in concert with all the little stabilizing ones. The kinetic chain is fully utilized. It is simple and athletic. Technique trumps brute strength. Often I am most sore afterward in the arches of my feet, my calves, and my knees.

The sport of SUP and downwinding was developed in Hawaii. Having paddled and raced in the islands, I can attest to how good both the conditions and paddlers are there. Bigger, longer period swells allow for fantastic runs. I have flown miles down the shoreline of Maui through tropical water, passing sea turtles en route. Downwinder paddling can happen anywhere there is enough fetch (distance for waves to form), however, and the waters off the coast of Maine can be very good when the conditions are right. Penobscot Bay and the outer islands in particular can be great for this, although the conditions for downwinding tend to be best during the colder, darker months when the weather knob gets turned up.

That November gale was a special run for me because it was a precursor to bigger paddles. The northerly blow created more chaotic wind chop than big ocean swells, but the conditions from Lincolnville Beach to Rockport were fast. Flying with the elements, I remember looking over my shoulder and feeling in awe of my surroundings. Standing literally on top of the water in a gale is a humbling, and in retrospect, peaceful perspective. It was taxing enough that I was completely in the moment.

I often get a safety speech from people who question some of my paddling adventures. What gear do I carry, et cetera? It’s hard to explain just how safe I feel out there as long as I dress correctly and am in good shape, both mentally and physically. In cold weather especially, I carry a VHF, bagged cell phone, food and water, and an inflatable PFD, but mostly it is just the board, paddle, leash, and myself. I have found that the board is limited only by the abilities of the paddler, and in relatively elevated conditions I would rather experience the ski-esque flow of being on a SUP than the heavy roll or pitch of a larger style of craft. 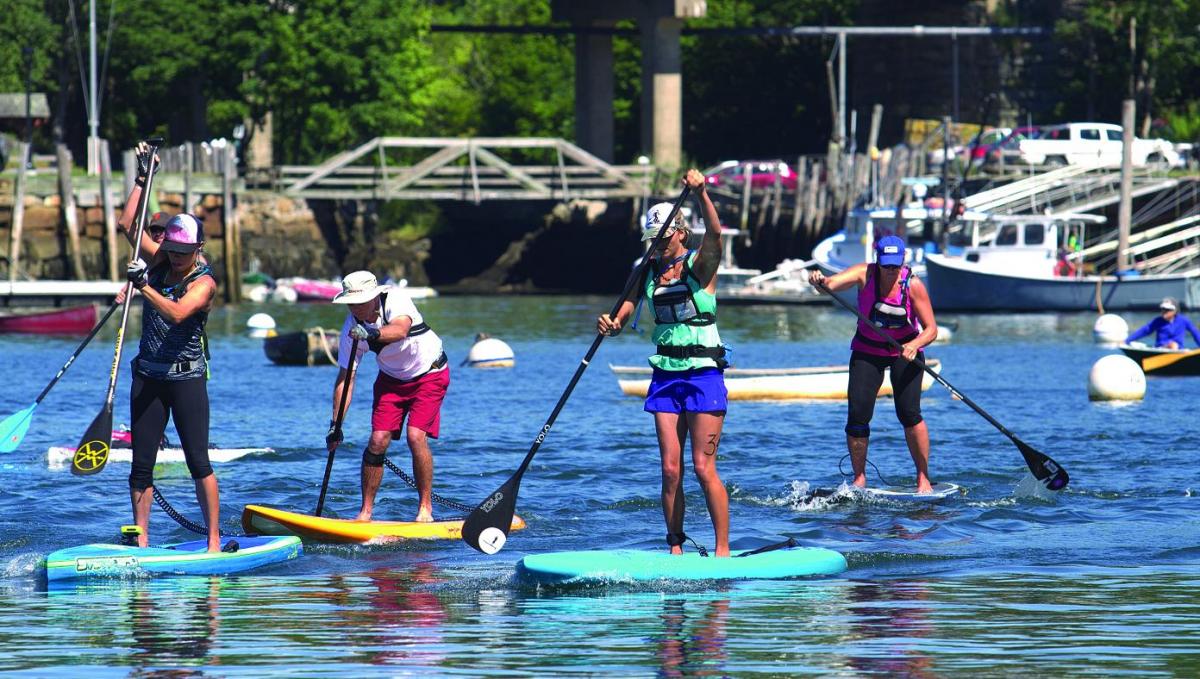 Emory helped start the Lobster SUP Cup, which takes place in Camden and Rockport. Shown here are racers in Rockport at the start of this year’s race. Photo by Jamie Bloomquist

I did have one spectacular wipeout in that November gale when I went straight off the back off the board. A gust of wind picked up the big SUP and it snapped against my ankle leash while in the air, which sent it hurtling down onto me. Fortunately, I survived unscathed. The cooling effect of the water actually helped because I was boiling in my drysuit.  Before standing back up off Deadman’s Point, I just sat on the board and took it all in. Even just sitting, I was still travelling at 8 knots. Eventually, I hopped back up and finished the downwind portion of my paddle.

After rounding into Rockport, I was forced to paddle straight upwind. The water was relatively flat, but I moved at a snail’s pace. Each gust felt like a punch in the gut. The contrast of struggling upwind was huge after having just flown downwind all the way from Lincolnville.

One yacht that had sought refuge from the gale was moored a half mile out from the docks. The captain, a friend of mine, clambered up on deck in his foulies and shouted against the wind, “Where the heck did you just come from?”

Thor Emory lives in Camden. A SUP racer and endurance athlete, he has paddled around Mount Desert Island (largely at night) non-stop for 47 miles in under 10 hours, paddled from Matinicus Island to Hurricane Island, and competed in races from North Carolina northward. In 2013 he competed solo in the brutal 32-mile Molokai to Oahu Race. He is co-founder of the multi-day Lobster SUP Cup race held in Penobscot Bay.