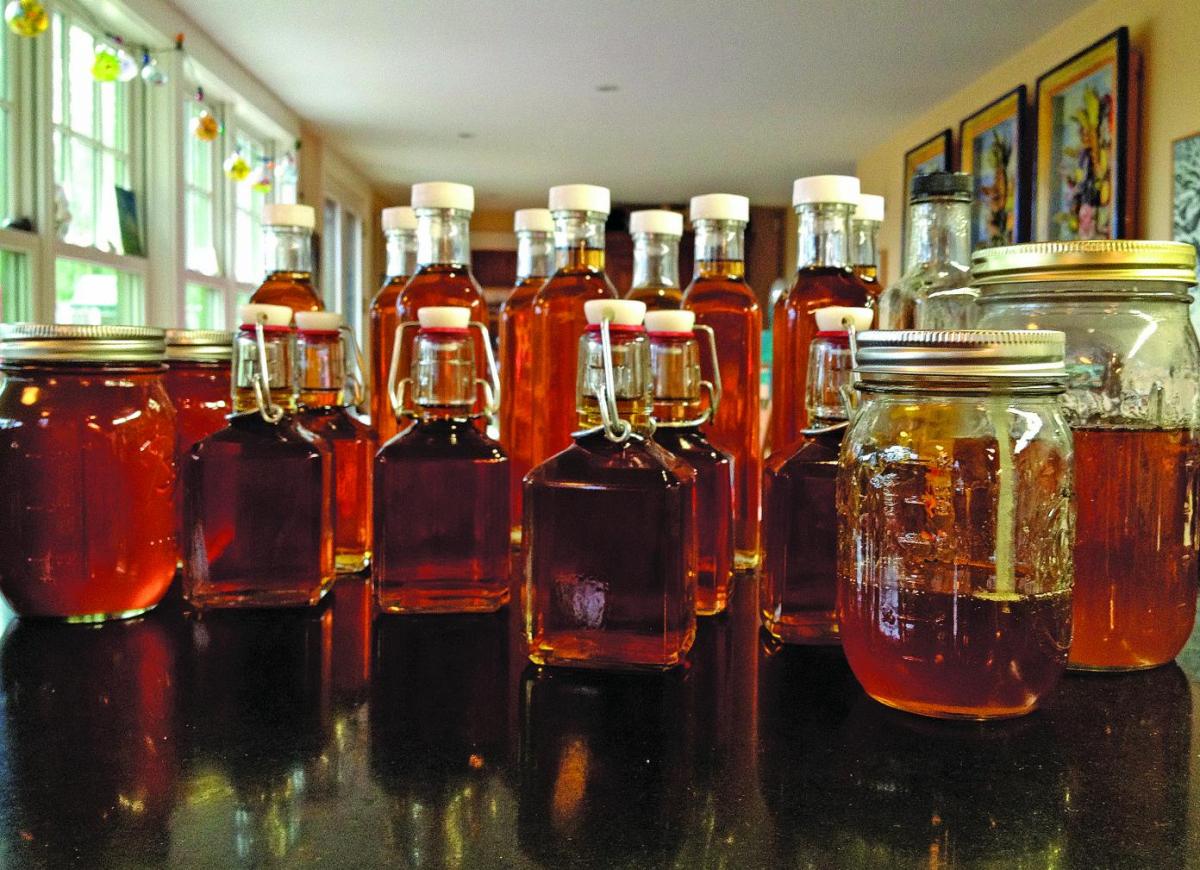 It’s relatively easy to make your own maple syrup at home if you have sugar maple trees and plenty of time to watch the sap boil down. Photos by Polly Saltonstall (2) When February and March night temperatures dip into the twenties and days slide into the high thirties or low forties, the sap begins to rise in the sugar maples. If you could stand among maples in a grove and actually hear the gallons of sap gushing through all those woody trunks, it would sound like a mighty river. A couple of holes drilled and a spile inserted into a tree makes it possible to capture the sap in buckets, or, less picturesquely, through modern plastic tubing, to be conveyed to a sugar house for boiling into syrup.

In the early days of the republic, sugar was the main goal of the process. In those days maple sugar was an economical alternative to imported cane sugar products for domestic use, as well as a valuable product to sell for much-needed cash.

Certainly the Native Americans found sugar making profitable, especially after they acquired the metal cooking pots that made boiling large quantities of sap comparatively easy. While written documentation is sparse, the Native Americans knew the value of sweet sap and how to harvest it. They apparently concentrated it by repeatedly freezing it and discarding the water as ice. Settlers adopted the collection method of downward pointing slashes made with an axe and the sap running into a wooden trough or earthen vessel.

Serious sugar makers in past times spent weeks collecting sap, boiling it, and observing the thickening and crystallizing syrup in order to catch it at the best moment for pouring out into troughs or molds. Then they pounded the resulting chunks into a coarse sugar or stored it to be broken up later for use to sweeten beverages or in baking.

Maple sugaring caught on across a wide, inland swath from western New England across New York, Pennsylvania, and Ohio and up into Canada, wherever maple trees thrived. There was even a brief maple sugar boom in the early 1800s while maple sugar makers sought to compete with cane sugar processors. Abolitionists particularly were hopeful of developing alternatives to cane sugar, which required huge numbers of slaves for the brutally hard work of growing, harvesting and processing sugar cane.

In 1772, The Art of Cookery Made Plain and Easy, originally authored by Englishwoman Hannah Glasse in 1747, was reissued in America with an appendix that contained a handful of American recipes including instructions for working with maple sweetening. “A receipt to make Maple Sugar” directed the sugar-maker to boil the sap in a wide mouth kettle, skim it, and let it settle before re-boiling to granulation. To prevent the sap from boiling over, a piece of butter or fat was added, a practice occasionally seen today. The cookbook claimed that maple sugar was as good as sugar “ever made from the sugar obtained from the juice of the West India cane.”

The cookbook further gave a recipe for maple beer, and for “maple molasses,” essentially what we call maple syrup, only cooked until it was a little thicker. When cane sugar making became mechanized in the later 1800s, white sugar became cheap and maple sugaring’s focus became maple syrup.

Maple syrup wasn’t the only thing people poured on their pancakes. In New England, in Maine, and especially along the coast, molasses was a preferred sweetener for most of the nineteenth century, taken on shipboard for use before the mast in coffee, tea, and as sauce for duff (a simple boiled pudding). Higher up the shipboard hierarchy, and in the fishing fleet, a light version of brown sugar, sometimes termed “high yellow,” sweetened coffee, while white sugar was provided for the captain and first officers. Sometimes canned sweetened condensed milk was brought aboard. It spooned milk and sweetening at the same time into fishermen’s and sailors’ coffee. Meanwhile, at home ashore, molasses gingerbread, doughnuts, puddings, steamed brown bread, and cookies used large quantities of relatively cheap sweetening. 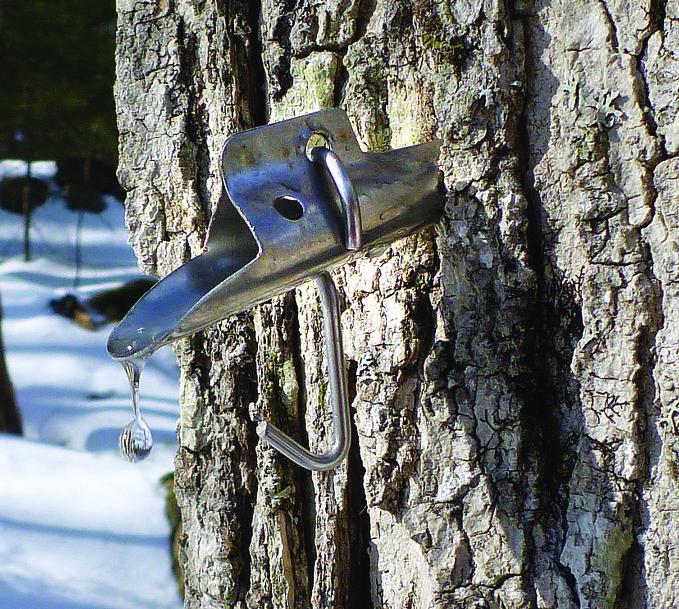 Spouts, or spiles, like this metal one, are used to draw sap from maple trees. Sometimes cider or apple molasses made from boiled-down apple cider took the place of molasses or maple syrup, although this doesn’t appear very much in cookbooks and seems to have been a home product. Cider is already high in sugar, and so required less boiling than maple sap. Apple molasses is slightly bitter, closer in flavor to cane sugar molasses and is less sweet than sorghum, but a farm family didn’t have to buy it, and it worked just as well in gingerbreads. And apples were so plentiful and juicy.

Cooks in the past were comfortable about adapting recipes to ingredients at hand. A molasses gingerbread could use cane sugar molasses, maple molasses, or cider molasses, and still come out as a recognizable gingerbread. There are some maple sugar and syrup treats, though, that benefit so much from the distinctive maple flavor that I would be hard-pressed to consider substitution. One is the maple syrup taffy made by spreading syrup on snow then winding the chilled but pliable result onto a stick for eating like a lollipop. Another is a fabulous French-Canadian dessert consisting of a piece of white bread floating on a small sea of cream, topped with a thick layer of shaved maple candy and generously dribbled with cream on top. This is groaningly delicious and easily replicated at home, but only maple sugar will do.

Maple’s mild flavor is easily lost in most baked goods made with the syrup. If you want a more assertive maple flavor in these cookies, substitute maple extract for the vanilla extract.

Sift together the flour, baking powder, and salt. Set aside. Cream the butter and brown sugar. Beat the eggs lightly and beat them into the butter and sugar mixture. Beat in the syrup and extract. Add the flour mixture, and mix until you have a stiff dough, adding a little more flour if necessary. Chill the dough for about an hour. Preheat the oven to 350˚.

Line a baking sheet with parchment paper. Roll the dough, and cut into desired shapes. Brush maple syrup on the cookies, then bake for eight minutes or until golden and done. Cool and store.