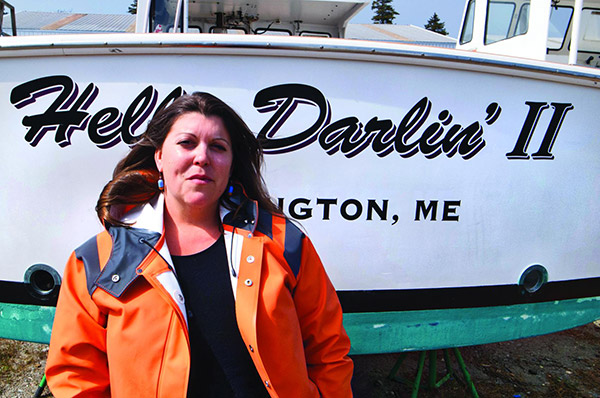 Genevieve McDonald of Stonington is captain of the fishing vessel Hello Darlin' II and has been a leading advocate for the creation of foul-weather gear that is designed and sized specifically to fit the many women in the commercial fishing industries. Photo by Jeff Dworsky

When you do dangerous work in an unstable environment, you don't want to be sloshing around in oversized clothes that can get in your way. It might come as a surprise in this day and age of advanced gender equality, but that's exactly the situation for women in the commercial fisheries. Until now, foul-weather gear, designed to keep people dry even in the worst weather on the water, has been sized only for men. Genevieve McDonald, who has been lobstering for more than a decade and owns her own boat in Stonington, went on a crusade to fix that problem. The results could be arriving on clothing racks as early as this fall. "It became apparent to me, while winter-fishing and always coming in a little wet and cold, the gear would not fit women," McDonald said. "It was too bulky and cumbersome. Sometimes I went without a coat, or I cut the ends of my sleeves and sacrificed the neoprene cuffs, or made some other modification that affected the integrity of the material." 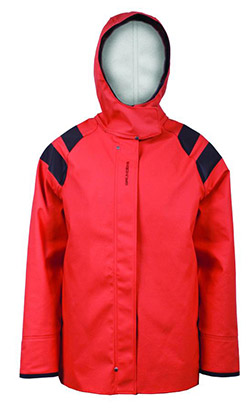 The initial "Sedna" line of jackets and bibs for commercial fishing will be followed by more items for women, including everything from waterproof breathables to mid-layers. Images courtesy Grundéns USA (2)

So a year ago, McDonald started a campaign to get the attention of major companies that produce foul-weather gear. As it happened, Grundéns was thinking along similar lines. The USA division of the nearly century-old Swedish maker of foul-weather gear, located in Poulsbo, Washington, went into design and development, consulted and tested prototypes with McDonald and other women in the fisheries, and now plans to debut commercial-grade bib overalls and jackets especially designed for women this coming fall. McDonald grew up in Blue Hill. By her early 20s, she was working as a varnisher at a boatyard that stores a lot of fishing boats when she connected with a lobsterman who needed crew. "That was 11 years ago," she said. "I never looked back." Today, McDonald is the owner and captain of F/V Hello Darlin' II, a commercial lobsterboat out of Stonington. She's the first woman to serve on the Department of Marine Resources Lobster Advisory Council, and also serves on the Commercial Fishing Safety Council. And she's the founder of an online Facebook community called Chix Who Fish, intended to recognize the important role women play in all aspects of the commercial fishing industry. Although she doesn't seek to make gender a focus of her conversation, inevitably McDonald is asked what it's like to be a female commercial fisherman in a traditionally male-dominated industry.

"I put out a call to woman fishermen to share their photos and the issues they have with their gear and received over 500 photos and stories from all over the world."

"Being a woman who works on the water is a lot of things," she has written. "It's satisfying and exhilarating and nerve-wracking and rewarding and frustrating and deeply gratifying. I can't say for certain, but I imagine these are the same feelings expressed by all fishermen, regardless of their gender or fishery. I tell people that, if you take care of your boat and your gear and put in your days, you will do just fine." Any misperception by other fishermen has been easy to correct. When she was starting her two-year apprenticeship for a lobster license, another older fisherman asked her, good-naturedly, if she was going to cook or fish. "I told him I was going to do both," she recounted. "A few years later, when I bought my first boat, he gave me a huge truckload of used rope to get started with." She has encountered more sexism on land from bank loan officers, wardens, and others. "Every time someone assumed I was the crew, and not the captain, of my vessel," she said.

An encounter last spring at the Maine Fishermen's Forum, with a Grundéns sales rep who was dismissive when McDonald said she was promoting commercial fishing gear for women and was interested in contacting someone at the company, prompted McDonald to write a scathing post about Grundéns on Facebook, which went viral. Company president Mike Jackson quickly responded, saying the rep in question no longer worked for the company and promising that new gear for women was being developed. McDonald is one of a growing number of de facto ambassadors for normalizing perceptions of women in the fisheries. She had no problem using her leadership skills when it came to the serious subject of foul-weather gear. This is not a minor issue. Historically called oilskins, waterproof outerwear was once made from heavy-duty canvas coated with linseed oil. Today, it's made from advanced synthetic fabric that resists water, salt, and the abrasive materials and sharp protrusions found on fishing traps and nets. "I put out a call over social media to woman fishermen to share their photos and the issues they have with their gear," she said. "I received over 500 photos and stories from all over the world, primarily the Northeast, the West Coast, Maritime Canada, and Australia." Women said the gear was too big and bulky. They suggested narrower shoulders, flared hips, and shortened sleeves and legs. McDonald took the conversation to Grundéns. "We've always felt women were an extremely important part of commercial fishing," said Grundéns CEO Mat Jackson. Grundéns USA is a family-run business founded by Jackson's father, a lifelong commercial fisherman as well as company president. Mat's mother worked in a seafood cannery, and Mat grew up with an understanding that women are integral to commercial fishing, whether it's on a boat, on the dock, or at home. The company, which had heard from increasing numbers of women in recent years, hired Eric Tietje, a former senior product line manager for The North Face's action sports division, to get the new line off the ground.

Earlier this year, the company announced its initial offering of bibs and jackets, specially tailored to provide the fit, comfort, and performance that women need on deck.

"We'd talked about it, we now had the resources, we've got a product guy who can make it happen, and we made it happen," said Mat Jackson. The company produced a series of prototypes that were tested in the field, by women including McDonald. Earlier this year, the company announced its initial offering of bibs and jackets, specially tailored to provide the fit, comfort, and performance that women need on deck. Jackson said it's expected the line will be released this November at the Pacific Marine Expo in Seattle, Washington. "I couldn't be happier with the Grundéns prototype," McDonald said. "It fits beautifully and addresses the previous issues I was having with the fit of my foul-weather gear. The new design will allow me to do my job more safely and efficiently." McDonald is pleased with this development. And there's more to come. "I'd like to develop a professional network to connect, encourage, and support women in the commercial fishing industry," she said.