Skate: easy to cook and delicious

By Nancy Harmon Jenkins
Growing up on the Coast of Maine meant I was exposed to a lot of seafood, probably lots more than people from other parts of the country. I understood early on how very good fish can be and how easy it is to prepare and enjoy. But (every good story has a "but" attached) we were extremely conservative in our selection. Lobster, yes, of course, and crabmeat (already cooked and picked out by the fishermen's wives), and also clams, but never mussels; they were for people who didn't have anything else to eat. Haddock and halibut were fine, and often on the Friday table, but no cod-"cod is wormy," my mother declared. Tinker mackerel, a small, young mackerel sometimes mistaken as trash fish, were a welcome delicacy in June, as were smelts in late winter when they started to run up local creeks. As for freshwater fish, they were said to have no flavor, except for salmon. When I was young, Atlantic salmon was a very rare treat. As for the rest of the products of the briny deep, we ignored them all-no squid, no bluefish, no shark, no weakfish, tilefish, monkfish, or whiting, no sardines (even though they were caught and canned practically on our doorstep), rarely flounder, and striped bass only if someone caught it surf-casting. 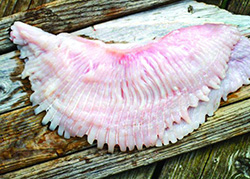 "Skate wings" are taken primarily from winter skate (L. ocellata) and thorny skate (Amblyraja radiata), according to Maine Sea Grant. The three other species that are found in the Gulf of Maine are used by fishermen as bait. Photo by Jamie Bloomquist
Many of these species were considered "trash" fish, and one of the trashiest of all was skate. It was so thoroughly trashy that most fishermen simply threw it back. That is, unless they decided to stamp out fake scallop rounds-a widely rumored practice of cutting rounds from skate wings that are then passed off as scallops-a concept that I have never been able to confirm. It's hard to think why anyone would take the trouble to do this when scallops themselves are a fairly easy harvest. Skate is typically caught incidentally by trawlers and gillnetters that are targeting more valuable species, such as monkfish, groundfish, and scallops. Nowadays, with our new emphasis on using the ocean's bounty more wisely, skate has become desirable, although I imagine if you had to start with a whole fish you might have some hesitation about the critter. First of all, like shark, skate stores urea in its skin, which is why it sometimes has a pissy smell. You must get rid of the skin before cooking. Second, the fan of cartilage that supports each of the skate's wings is pretty chewy, so the meat should be filleted off that cartilage if at all possible. It's not that difficult, and I'm lucky to live near a wonderful fish monger, Jess's, in the South End of Rockland, Maine, where I can pick up a pair of skate wings, all skinned and cleaned of their cartilaginous bits and ready to cook. 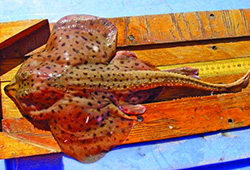 A relative of sharks and rays, skates are kiteshaped, bottom-dwelling fish. The winter skate is light brown with dark brown spots, has small spines along its back, and can grow up to 5 feet in length and live for up to 20 years. Photo courtesy Gulf of Maine Research Institute
Skate is quite simply delicious when properly cooked, which is not difficult. I'm told that, unlike most fish, skate actually improves and becomes firmer in texture if it's held for two or three days. This is not usually a problem since skate may already be a couple of days old when you purchase it. Skate is often deep fried to be part of a traditional British fish-and-chips package. But the classic French way, raie au beurre noisette or skate in brown butter sauce, is best of all, and certainly a lot classier than fish and chips. Poach the boned skate wings in a court bouillon made from about ½ cup white wine vinegar and 2 cups of water, or flour the wings lightly and sauté in olive oil, just 2 minutes to a side. Either way, make a beurre noisette in a small skillet and tip it over the hot skate wings arranged on a serving platter or on individual plates. I prefer the poaching method, just because it's less messy. Nancy Harmon Jenkins is the author of many books and contributor to a number of publications including The Wall Street Journal and Saveur. She lives in Camden and Tuscany. Her most recent book is Virgin Territory: Exploring the World of Olive Oil (Houghton Mifflin Harcourt, 2015).
Poached Skate Wings in Brown Butter Sauce
Ingredients ½ lb. boned and skinned skate wings ½ cup white wine or apple cider vinegar 4 cups water Pinch of sea salt 4 Tbsp. unsalted butter ¼ cup capers, soaked in warm water, drained and patted dry ¼ cup finely chopped flat-leaf parsley 1 or 2 Tbsp. aged wine vinegar (sherry vinegar is great for this) Freshly ground black pepper Directions Rinse the skate wing(s) and pat dry with paper towels. Combine the vinegar and water in a deep skillet in which the skate will just fit. Bring to a simmer, then slide the skate into the skillet. Simmer gently for about 3 minutes, then cover the pan and turn off the heat. Let the skate sit for 15 minutes in the poaching liquid while it continues to cook, then remove the skate from the pan, using a wide spatula, and set to drain on paper towels. (You can also flour the wings lightly and sauté in olive oil, just 2 minutes to a side, but I prefer the less messy poaching method.) Arrange on a warm serving platter or on two warm dinner plates. Melt the butter in a small skillet over medium heat and continue cooking until it turns nut brown (about 10 minutes). Have ready the capers and parsley, and as soon as the butter has turned brown, stir them in, swirl the pan to mix well, then swirl or spoon the sauce over the skate wings. Immediately return the skillet to the heat and add the aged wine vinegar. Bring to a simmer and cook for just a minute or two, swirling the pan. Pour the hot vinegar over the top of the skate, add black pepper to taste, and serve immediately. Makes 2 servings.