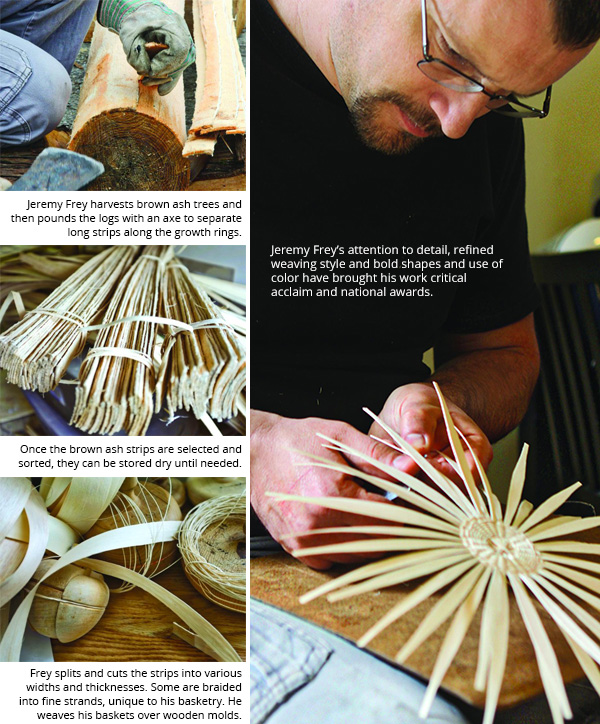 Photos by Billy Ray Sims
"When the son of the Creator, Koliskap, came to this area there were no people here. So he pulled an arrow from his quiver and fired it at a brown ash tree. The tree split in half, and from the split in the ash tree stepped the first Wabanaki man and the first Wabanaki woman, side by side. So when we weave baskets, we are using that same tree from which we were born." -George Neptune, member of the Passamaquoddy Tribe 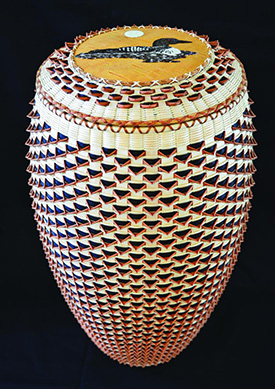 "Loon," woven of natural and dyed brown ash. Photo courtesy Jeremy Frey
The rhythmic sound of an axe head pounding a felled brown ash tree trunk can be heard blocks away from the Indian Island, Maine, home of Passamaquoddy basket maker Jeremy Frey. After removing the bark, he pounds the tree to loosen its inner sections in a tradition that links him to his ancestors who followed the same process to prepare material for basket weaving. Their baskets served universal functions of those the world over-to carry and store food, to catch game and fish, and to hold possessions both mundane and of supreme importance. Frey holds the end of the trunk, grasps several growth ring layers that have been loosened by the pounding, and peels them into a strip that runs the length of the log. He will split and scrape this strip, then cut it into splints as small as 1/32" that will be woven into an urchin basket, one of his most popular designs. Based on sea urchins found along Maine shores, it is an old Passamaquoddy style that he has revived with vibrant color and form. 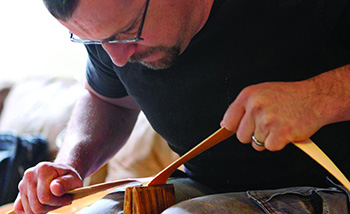 Frey pulls the rough strips from the log in two, which yields the final splits used for weaving. Photo by Billy Ray Sims
Since taking up basket making 13 years ago using traditional techniques, materials and tools, Frey has evolved into a sought-after artist on the national stage. He received an unrestricted $50,000 grant from the United States Artists foundation in 2010. The following year, he won best of show awards at both the annual Heard Museum of Native Cultures and Art show in Phoenix and the Santa Fe Indian Art Market, which are among the largest indigenous peoples art shows in the world. This year, he won best of show again at the Heard. His work has also been chosen for the 2015 Portland (Maine) Museum of Art's Biennial, a curated show featuring work by some of the state's best contemporary artists. Frey's career as an artist began with personal setbacks. "I had been out into the world and joined the workforce young," he said. "There was crisis in my life, and things weren't going the way I wanted them to. So I returned home to live with my mother. "I knew where the road for my life was, but I just couldn't get through the mud to get on the road. Coming home allowed me to hit the reset button." His mother, Gal Frey Tomah, had begun to learn from another respected Passamaquoddy elder, Sylvan Gabriel, how to weave "fancy" baskets, the highly-refined, non-utilitarian baskets made for shows and collectors. She encouraged Jeremy to try the craft, which had been in his family for many generations. His uncle taught him how to harvest and process brown ash trees. "I picked her hardest design," Frey said. "The materials were horrible quality, but I made every part of it and started putting it together. I threw it across the floor two or three times in frustration along the way, but I finished it." Eventually the basket sold for $75. 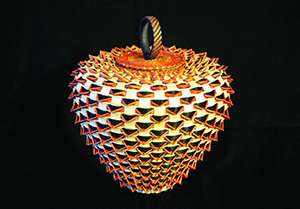 "Point Basket," brown ash. Photo courtesy Jeremy Frey
"I thought that basket was pretty amazing," he said. "Looking back on it now, I think it was pretty horrible. But from that day I never went back to work for anyone. I chose my path." Ten years earlier, the Maine Indian Basketmakers Alliance had been formed to save the basketry traditions among the Maliseet, Micmac, Passamaquoddy, and Penobscot tribes through outreach and education, as well as through expanding the market for baskets. Each July, in collaboration with the Abbe Museum in Bar Harbor, the Alliance holds a basket makers' market at College of the Atlantic. The market has grown into one of the most significant Native American arts sales venues in the eastern United States. In his early years as a basket maker, Frey would walk the aisles of the show studying every family style, material choices, and the quality of each piece. "I thought carefully about what makes a salable basket and how I could do something different that no one had ever seen before," he said. Each year, Frey sold out of baskets. "The first show, maybe I made $1,000. Wow! The next year maybe $3,000, and I thought, 'How can I beat this?'" Each year his sales improved and his baskets attracted more attention from collectors. Frey's baskets are noted for their strength and integrity, and the refinement he puts into the processing and preparation of materials. His designs have an ethereal quality. "I don't think of them as merely vessels, but as pure art. Our tribal basketry styles include such a wide palette of designs, textures, shapes, and colors," he said. Some baskets are made entirely with unenhanced natural materials such as brown ash, sweetgrass, spruce root, cedar bark, and porcupine quills. Frey challenges himself to find new ways to work these materials. Several of his baskets, for example, are woven with braided ash splints just 1/16" thick. Frey also recently created a series of vase-like shapes with mesmerizing patterns of dyed ash splint and elegant lines. The "Loon," which won best of show at the Heard this year, stands 20" high by 11" wide, was woven on a wooden mold, employs looping strands of woven ash, and has a loon depicted in porcupine quills. 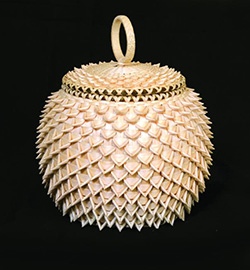 "Woven Pottery," brown ash and sweet grass. Photo courtesy Jeremy Frey
"It has an energy," said Frey. "If you look at it long enough, it appears to change. There appear to be X-patterns that spiral up the basket, but then they disappear. It looks black from one direction and brown from another. It almost seems to be alive." Frey describes his work in terms of aesthetics, design, and craft. George Neptune, educator at the Abbe Museum and a Passamaquoddy basket maker, says the process is spiritual, as well. "Making a basket in and of itself is a sacred art. Because you, as did Koliskap who brought forth the Wabanaki people, are doing the sacred act of creation. Taking something from nature and turning it into something altogether new from nature." According to Wabanaki belief, when you make a basket, "you take a small portion of your spirit and give it to the basket to give it life. So each basket is a part of you," Neptune explained. The process also links the presence to the past, he added, "because we most often learn to weave from someone in our family where you have so many generations of basket makers before you who used the same materials, techniques, and tools." Once Frey strips the growth ring layers of brown ash from a log, he splits each into ribbons by hand, using a cutting gauge to create different widths for weaving. He carves and shapes many structural parts with a knife, and often weaves over a wooden mold to ensure a uniform shape. Basket weaving begins with the creation of a base. Frey employs particular care and diligence in this part of the process. "Even though many basket makers emphasize the sides and parts you can see," he said, "I want every aspect of the basket to be precise, and the level of detail allows me to describe the process to a prospective buyer and tell the story of the effort involved to create each basket." In the bright afternoon light streaming through the windows of his living room, Frey weaves a mass of strands of ash, over and under one another, until they are tamed and begin to take shape as an urchin basket. He makes 50-70 baskets annually. Of those, up to four will become major works that require several months or more to complete. These baskets often originate from a series of sketches or evolve from previous works. Through his incessant effort to improve and innovate, Frey has shifted the attention of collectors, galleries, and museums from the works of Native Americans in the Southwest, the Plains, and the Northwest to the art and culture of Maine's tribes. "That national spotlight," said Neptune, "is showing on our community and will have a ripple effect on the area." As Frey lashes the rim of the basket with a long ash splint, he says he believes in the traditional notion, "Every basket I make has a home already. I just have to wait for that person to come and get it." Billy Ray Sims is an editor and artisan basket maker. Watch a video of Frey at work by Billy Ray Sims. https://www.youtube.com/watch?v=g7X9vr8VxPY
Wabanaki Basketry Events This Summer "Four Directions of Wabanaki Basketry," is an ongoing exhibit at the Abbe Museum in Bar Harbor that features a basket from each of the Wabanaki tribal communities. The museum also has Wabanaki baskets for sale. (abbemuseum.org) Maine Indian Basketmakers Alliance will host several basket markets this summer: including the Maine Native American Summer Market & Demonstration, August 22, Shaker Village, New Gloucester, ME; and the Common Ground Fair, September 25-27, Crosby Brook Road, Unity, ME (maineindianbaskets.org)