These freshwater clubs have been around for many years 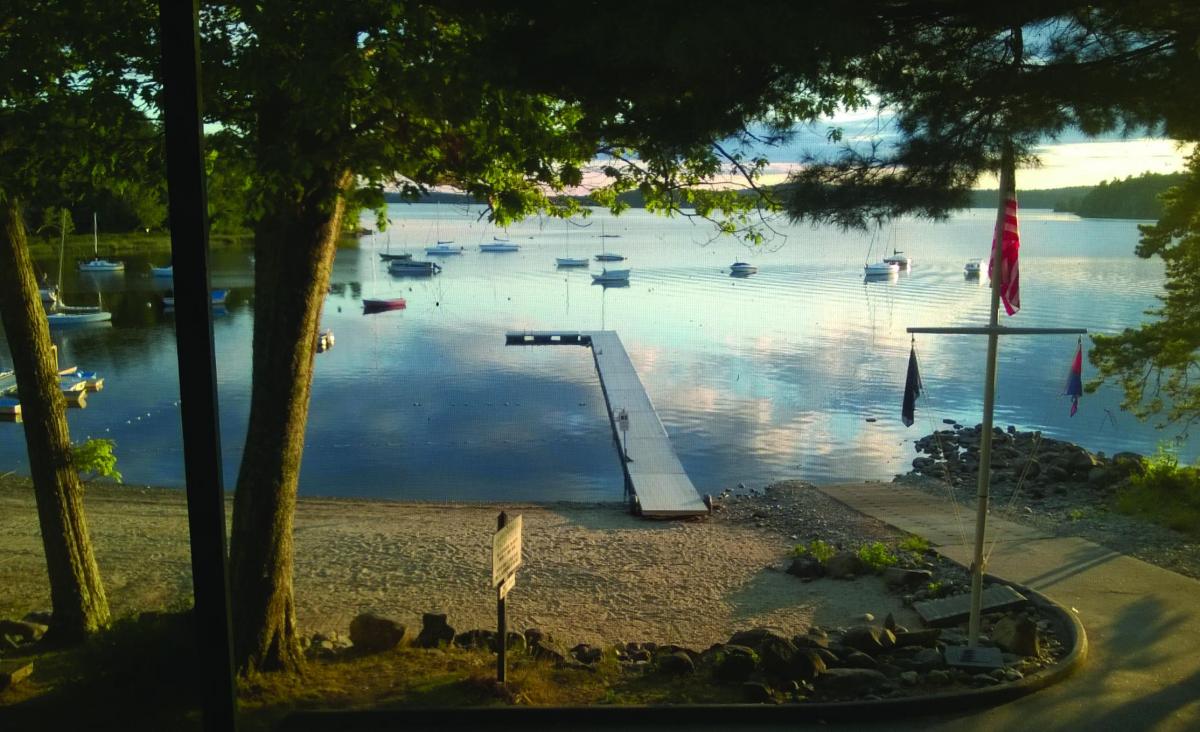 The view from the porch of the Androscoggin Yacht Club in Wayne looks much the same today (above) as it did 100 or so years ago (below). The launching ramp was added in the 1960s. Photo by Kevin O’Rourke 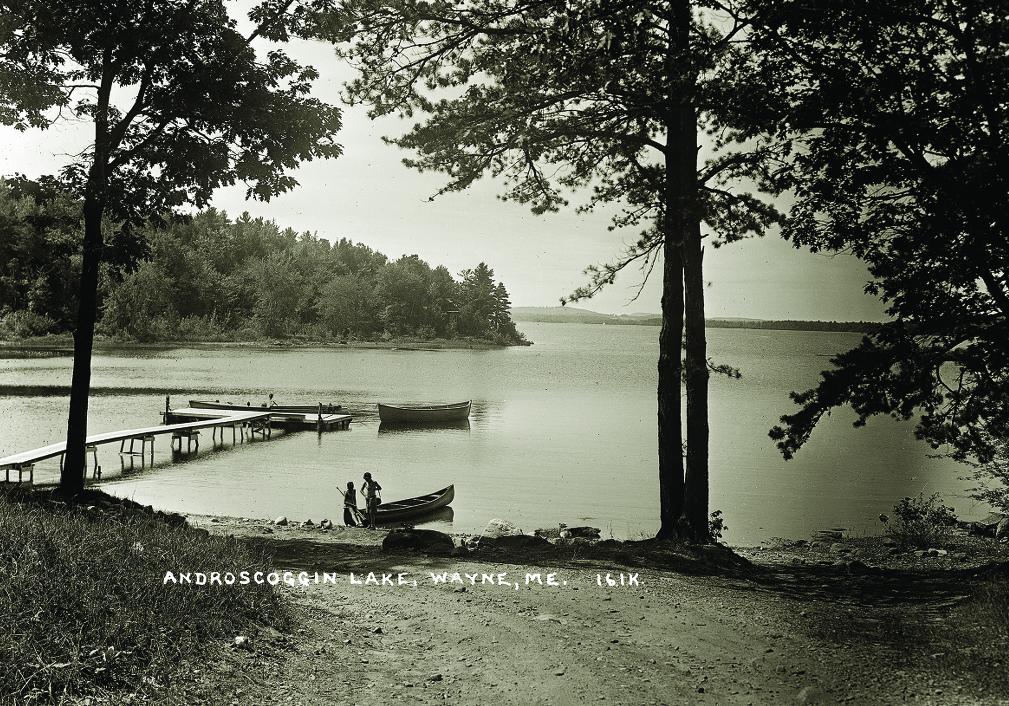 Image courtesy Penobscot Marine Museum They may be miles away from the Maine coast and its boats, but the state’s many lakes have attracted summer folk for more than a century. Like their counterparts along the salt water, these freshwater rusticators started yacht clubs.

Three small-scale clubs on Androscoggin and Cobbosseecontee lakes in central Maine, and Moosehead Lake in Northern Maine, date back to the early 1900s. Cobbosseecontee’s club maintains Maine’s only inland lighthouse, the diminutive Ladies Delight Light. On Moosehead, the club there helps a local museum maintain the 101-year-old steamship Katahdin. The steel vessel, now diesel powered, serves as the club’s flagship. 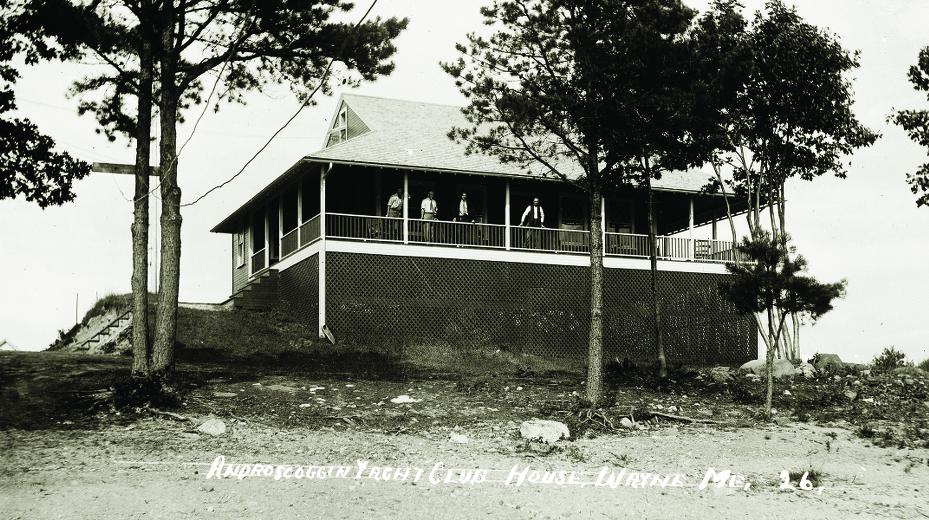 An exterior and interior view of the Androscoggin clubhouse soon after it was built. The clubhouse and land cost $2,500 in 1909. Image courtesy Penobscot Marine Museum. Bruce Burleigh is commodore at the Androscoggin Yacht Club in Wayne, where during the summer season 150 or so members hold power and sail regattas, dances, family picnics, and provide sailing and swimming lessons.

The club was incorporated in 1909 with the purpose of “promoting yachting and boating on the waters of Lakes Androscoggin and Pocasset,” along with preservation of fishing and care for the lakes. 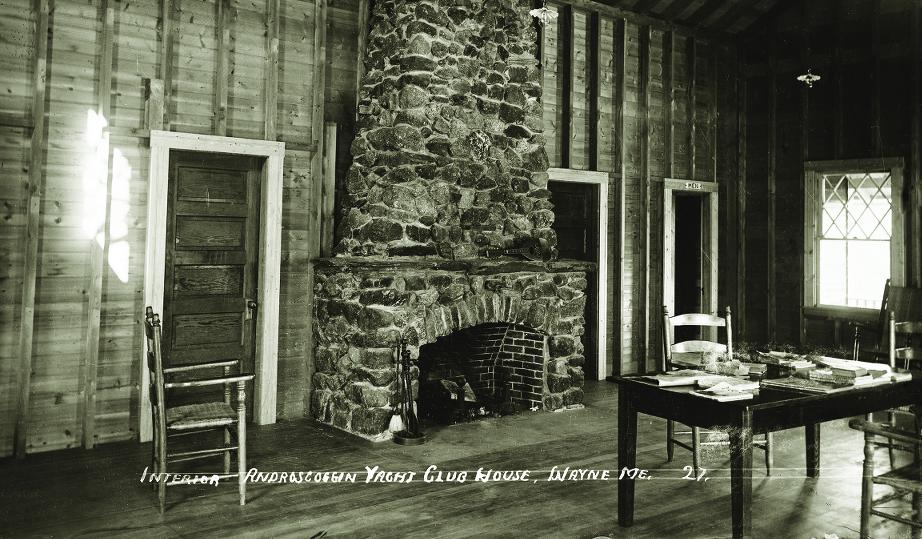 Image courtesy Penobscot Marine Museum. “It’s quintessential Maine,” Burleigh said. “ If you walk into our clubhouse and look at the stone fireplace, and look at a picture on the wall from 1910, it looks exactly the same as now.”

The simple clubhouse, with its wraparound screen porch, perches just feet from a sandy beach, overlooking a long wooden dock.

An orthopedic surgeon from Joplin, Missouri, Burleigh has spent his summers in Maine since boyhood. Now his children and grandchildren visit the 3,826-acre Androscoggin Lake. 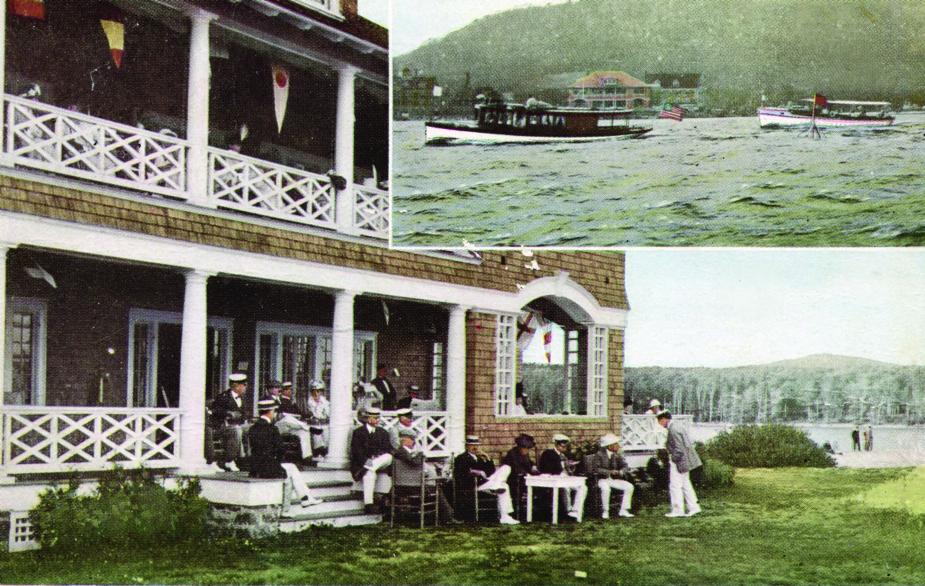 This building near the Mt. Kineo Resort was the headquarters of the Moosehead Lake Yacht Club when it started in 1908. Back in those days the club even had special china featuring its logo. The building is now a private home and the club meets in different places including the steamer Katahdin, (following photo) which offers cruises of the lake during the summer months. Courtesy Moosehead Historical Society The lake is shallow, and most club members’ boats are no more than 16 feet long. They range from gleaming classic motorboats to assorted wooden sailing dinghies. Club moorings are free to members. Annual dues are $95 per family. As with most of the lake yacht clubs, anyone can join, whether they own a boat, or not, said Burleigh.

About half the members are year-round residents of Wayne and nearby towns, while others are seasonal visitors. Wayne itself, with its prim 19th-century homes and vintage general store, is a trip back in time, and the yacht club fits right in. 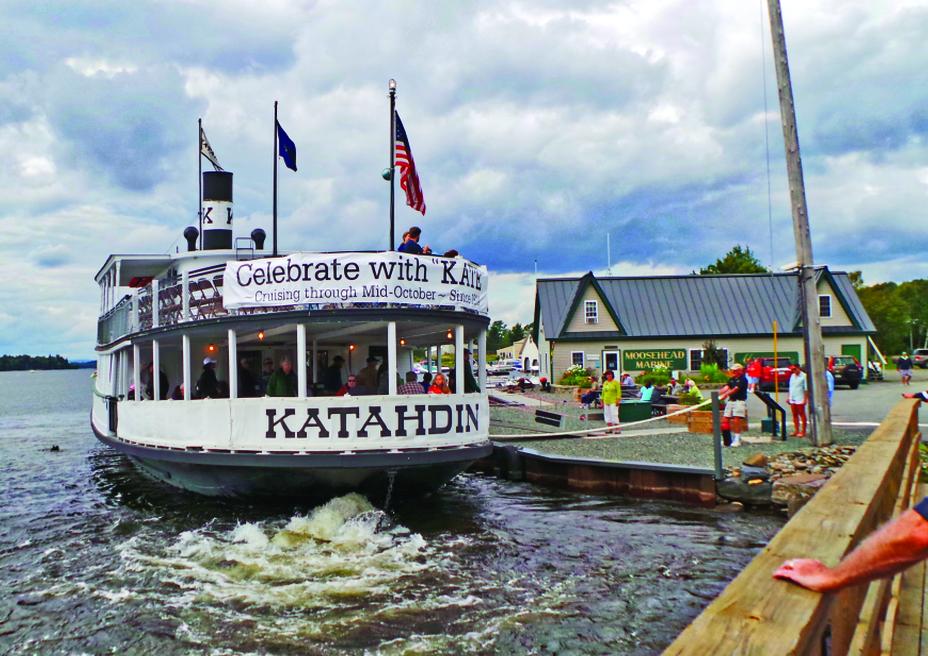 Courtesy Juan A. Galan, Jr. The Cobbosseecontee Club (most locals shorten the lake name to Cobbossee) also has kept its dues low, just $25 per family. Jack Schrader, the club’s treasurer, has been spending time on the 5,543-acre lake since he was a child—his grandparents operated a boarding house for summer guests there. A retired computer engineer, he said the 300 club members “are just a bunch of people interested in preservation of the lake.”

The club was started in 1904 and is considered one of the oldest continually active freshwater yacht clubs in the country. Back in those days the lake was a popular tourist destination, with excursion steamboats and a recreation area called Island Park that was served by trolleys run by the Augusta, Winthrop, and Gardiner Street Railway. 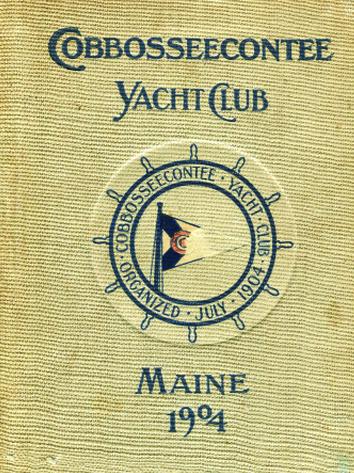 The original yacht club manual (above) contains several pages of rules and guidelines for iceboats as well as sail and power boats. In these images from the manual, Cobbosseecontee Yacht Club founder Daniel Robinson poses by his iceboat, Reindeer, circa 1904. In the summer, Robinson had a powerboat and also sailed this 25-foot yawl named Gretchen. Book and photos courtesy MBH&H Collection Daniel Robinson, who had published a navigation chart of the lake and a companion pilot book in 1900, started the club as a lake association and yacht club. He also was responsible for the construction of the lighthouse, which marks an especially large jagged reef in the lake’s north bay.

Today, besides efforts to control invasive milfoil growth, the club hosts summer regattas and has raised $30,000 to restore the Ladies Delight Light, which is powered by an electrical cord that runs to a member’s house on the mainland. Through the colder months, when the lake is frozen, members gather at various houses for Saturday night drinks and hors d’oeuvres.

“There are very few actual yachts of any size,” said Schrader, who remembers as a boy seeing a great gaff-rigged iceboat scoot across Cobbosseecontee. Most members have outboard motorboats, like the Bowrider with a 75-hp engine that Schrader used for years. Schrader’s wife, Diane, is the club’s storekeeper, selling T-shirts and burgees. “We’re trying to do things that get the younger generation involved,” he said. 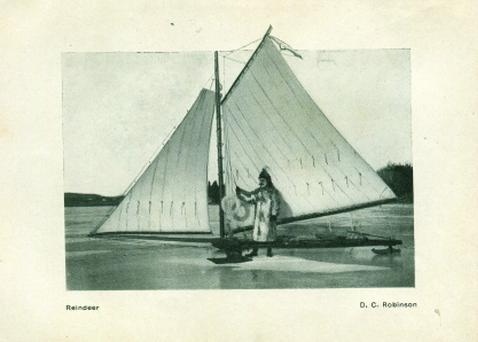 One of those events is the annual Horseshoe Island concert with the School Street Band, the third Saturday in July. Boats raft up or anchor nearby to enjoy the music. 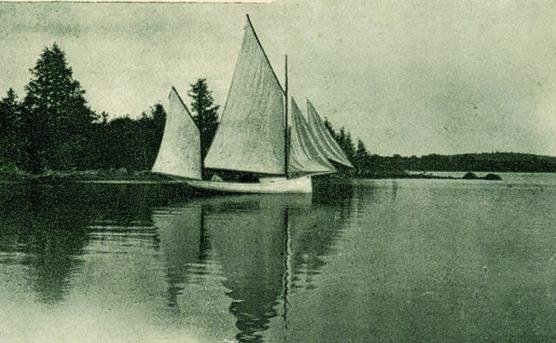 Up on Moosehead Lake, the yacht club began as a function of the grand Mt. Kineo resort, which was frequented by Bostonians and others who took the train to Greenville and then ferried to the big hotel. The elegant waterfront clubhouse is now a private home, so the modest Moosehead club, now based in Greenville, sets up a tent when it needs more room for functions.

The club has about 150 members, most of them seasonal Maine residents, according to Vice Commodore Juan Galan, a retired beer distributor from Coral Gables, Florida. A saltwater sailor of boats up to 72 feet, Galan said the 40-mile-long lake provides ample area for small boat cruising, with coves and islands to explore.

The main building at the Mt. Kineo resort burned in the mid-1900s and the annex was torn down in the 1990s. Image courtesy Moosehead Historical Society Club Commodore Waldo Klein has been coming to Moosehead with his wife Lin for 22 years. They own a small island, and just bought a Strykercraft motorboat with enclosed pilothouse. A retired gerontologist, Klein said the club’s members share a love of Moosehead’s natural beauty, and enjoy social outings.

Each season starts with a “commodore’s reception” and outing on the 101-year-old converted steamboat Katahdin, which in the early days transported “sports” to resorts and lodges and  was later used to tow booms of logs to be driven down the river. 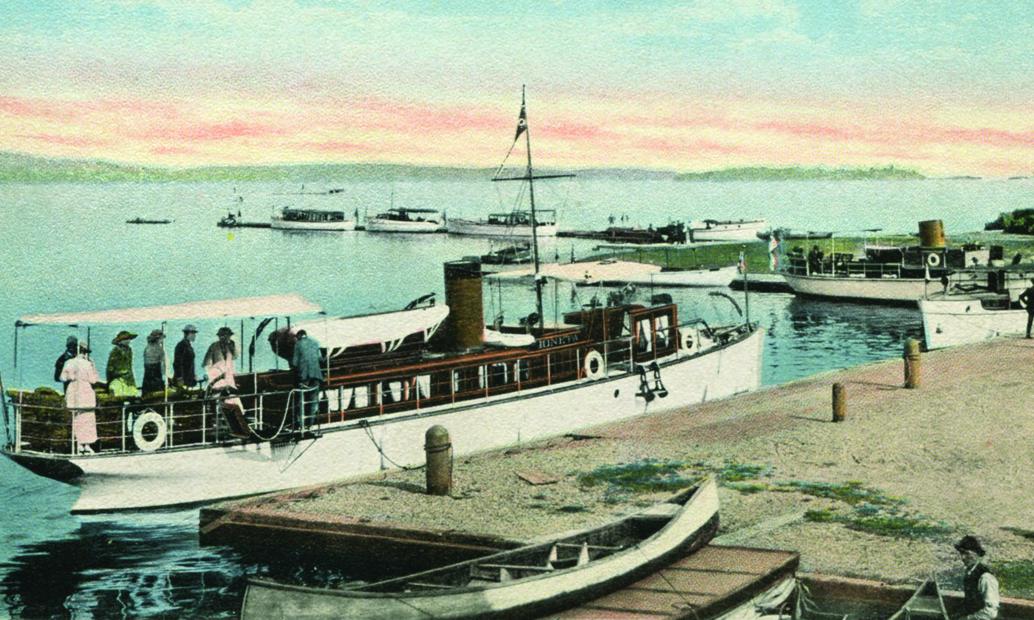 Owned by Commodore Arthur B. Waring of New York, the 63’ steamer Ioneta, shown here circa 1925, was one of the flagships for the Moosehead Lake Yacht Club. Interestingly, Waring also was a member of the New York Yacht Club. Image courtesy Moosehead Historical Society The club hosts an annual antique and classic boat show—to be held July 17-18 in Greenville this year. Other club events include a pig roast in Rockwood, and the Kineo Cup race.

Galan said some people sail, but winds are fickle and sometimes fierce on Moosehead, and motorboating predominates. Still, the club offers sailing lessons as well as kayak tours. Galan and his wife bought a home on a nearby mountain in 2007, and stay there from June to October.

“It’s a beautiful area. Most people want to keep it that way,” he said.

Lakeside yacht clubs may seem a world apart from their saltwater counterparts. But the love of sailing, socializing, and spending a sunny summer day on the water is the same wherever you are.

Freelance writer and photographer Steve Cartwright grew up in New York City, summering in Tenants Harbor, Maine. He spent 30 years with Maine newspapers and lives with his family in Waldoboro, Maine.

Lady of the Lake

While many people associate lighthouses with Maine’s rocky coast, Cobbosseecontee Lake near Augusta has been home to one named Ladies Delight since 1908. 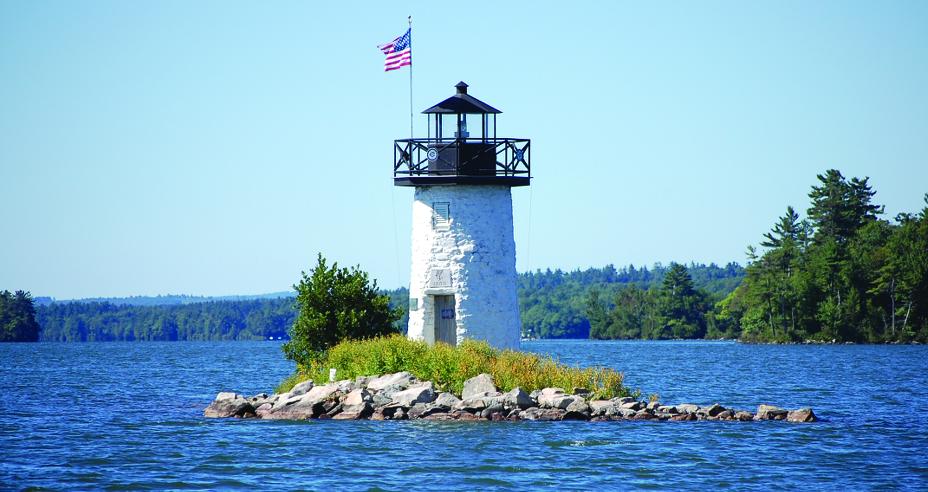 Built in 1908, the Ladies Delight lighthouse is the only one remaining of three such structures that once helped guide boats on Cobbosseecontee Lake. Top, the lighthouse as it looked soon after construction; below, as it looks today, after extensive renovation by the Cobbosseecontee Yacht Club, which has maintained the light since its construction. Photo courtesy Jack Schrader Designed by Frank Moore of the board of U.S. Lighthouse Engineers in Boston, the lighthouse was built by a local man named Albert Farr, and paid for by Daniel Robinson, a summer resident from Boston, who also started the Cobbosseecontee Yacht Club in 1904.

The lighthouse, which is 16 feet high (its lantern adds another nine feet) has always been maintained by yacht club members. Originally the structure was lit by a kerosene lantern, and the reflector was rotated by a system using grandfather clock-like weights. The light, which flashes year-round, is now powered by electricity delivered via a cable that runs from a member’s house on the Manchester shore. 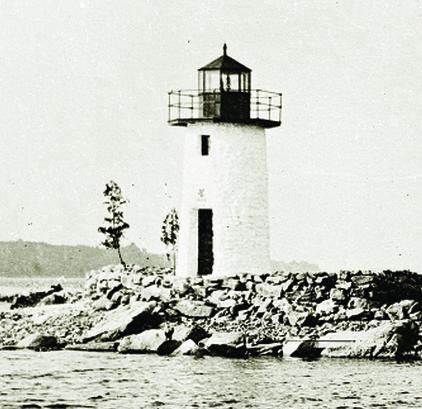 Image courtesy Penobscot Marine Museum The lighthouse marks one of many reefs on the 10-mile long lake and was necessary because in 1908 the number of boats on the lake had drastically increased, both because of private yachters and excursion steamers. By the early 1900s, the lake was lined with summer cottages, inns, and even a dance hall that drew national acts.

At one point the lake was home to two other lighthouses, which have since disappeared.

Back in those days, the Cobbosseecontee Yacht Club had 150 members, according to a 1909 article in Motor Boat Magazine, and hosted a number of sailboat and motorboat races during the summer months.

Current club treasurer Jack Schrader said that two oxen were used in the construction of the lighthouse. The builders could transport only one ox at a time because of the size of their barge. After taking the first ox to the island, the workers returned for the second one. But in the meantime, the first ox grew lonely and started swimming back to the mainland. The work crew finally succeeded in getting both oxen onto the island and the lighthouse was completed over the course of that summer.

According to Schrader, the lighthouse got its name because in the early days it was a way station where ladies in boats going from one end of the lake to the other could stop and “freshen up.”

“I’m not sure if that’s really true,” he said. “But that’s the story.”
—Polly Saltonstall