The clubhouse is wherever the members congregate

How many successful “yacht clubs” do you know whose sole capital investment amounts to eight moorings and a bar trailer?

Since its founding in 1966, the Down East Yacht Club has brought together boaters who enjoy cruising without the formality of a traditional harbor-based club. The “clubhouse” is one side of a floating dock with space for boats; members come from as far away as Canada and Marblehead, Massachusetts.

Their boats range from canoes all the way up to 52-foot motorcraft and sailboats. And like many sensible Mainers, the club and its members head south in the winter, running programs in Florida, as well as a ski trip in Maine when the water downeast is too cold for yachting. 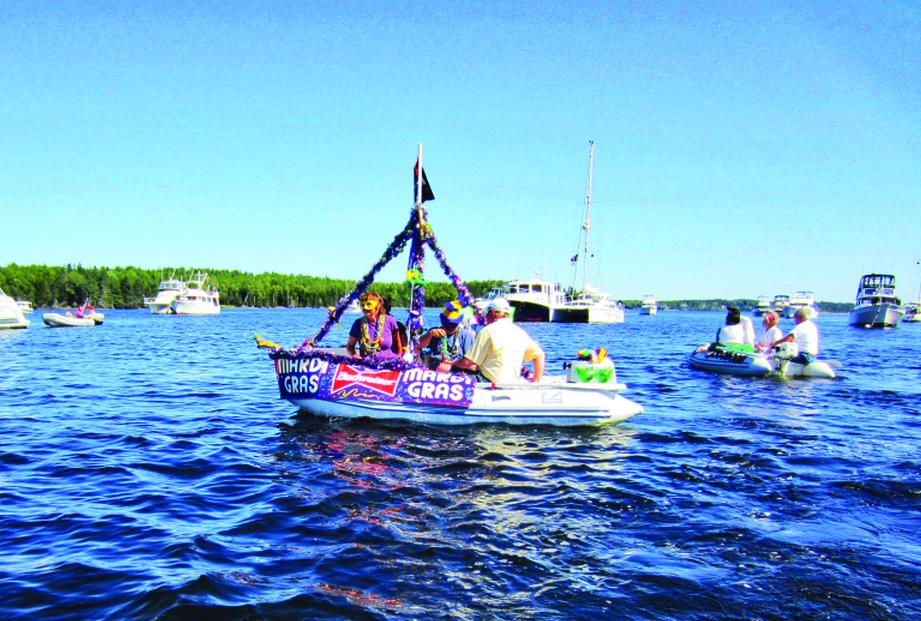 Down East Yacht Club members decked out for a boat parade. Photo by David Quist The club traces its beginnings to a warm June day in 1966 when a group of people was gathered on the dock of the ex-Boatel Marina (now Tugboat Inn) in Boothbay, telling jokes and laughing. Marina owner Vernal Furbush suggested they start some sort of “fun” club and offered them the use of a space recently vacated by the Boothbay Harbor Yacht Club, which had moved to West Boothbay Harbor. After some discussion and research, a small group of boaters took him up on the offer and decided to start what they called an “intown” yacht club.

Arthur Rousseau was elected as the first commodore in 1967, the organization’s first official year. Dues were set at $15 for boat owners, and $10 for non-boat owners. By the end of 1967, the club had 77 members, a number that has grown to 250 today.

Soon the club began to form its own traditions. Member Hockey Steele hosted a party at his house on Southport Island to eat spring peas. The gathering soon became a regular event known as “The Annual Green Pea Party.”

The club’s first woman commodore, Shirley Geoffrion, said she was elected to instill some fiscal responsibility. “We never aspired to be like other yacht clubs,” she said. “Our purpose was to have fun and help members enjoy boating.”

During her one-year tenure, the club’s old travelling bar, known as the “Woody Wagon” was replaced by a larger commercial trailer, the books were reorganized, and a commodore’s guidebook was written and printed.

In keeping with the club’s reputation for fun, its schedule of events would do a New York socialite proud. In the winter there are monthly parties and events in Florida; events in Maine include a winter ski trip. A “launching” party kicks off the summer boating season and a “haulout” party in the fall closes it.

The annual cruise, which usually heads downeast, is a major event, enlivened by kayak racing, rowing, paddling, and powered-dinghy races, a decorated dinghy competition, and costumed beach cookouts where members dress as characters.

Then, there’s the “Pink Shackle” award, instituted by a past commodore, Carl “Woody” Thompson. “I found this heavy, old and rusted shackle on one cruise and a few of us got to wondering what we could do with it for fun,” Thompson said. “We came up with the idea of painting it pink and awarding it at the final cruise dinner to the skipper who made the dumbest mistake on the cruise that year. Believe me, we’ve had some doozies.”

Although having fun is a major reason this club has been so successful, leaders wholeheartedly stress safety and security with the members, said past-commodore Bob Wheeler of Damariscotta. “At a pre-cruise meeting we go through all the details, ask members old and new for any misgivings, find out who is light on navigation skills, and who needs help. Then we group the inexperienced and those needing help together with those who’ve spent a lot of time on the coast. You can’t have fun if you’re not secure.”

Lee Wilbur, a freelance writer, is the retired founder of Wilbur Yachts of Southwest Harbor. He now divides his time between Florida and Maine, and is a member of the Down East Yacht Club.

Edgar Reed 2nd, then 28, competing in the state’s first Water Skiing Slalom Championships in 1952 in Boothbay Harbor, which he won. Photo by Peter Besh/Courtesy Alden Reed Attend a Down East Yacht Club gam and you might see a boat named Waterskier. It belongs to Edgar Reed and the name applies to him, not his vessel.

Now 91, and the club’s senior past commodore, Reed has been known for his waterskiing exploits since 1940 when he owned the first pair of water skis in Boothbay. He waterskied twice from Boothbay to the Portland Yacht Club in Falmouth, and once he skied 108 miles around Sheepscot Bay for five and half hours, practicing for a trip from Boothbay to Rockport, Massachusetts, that he never did end up making.

One of his last times on skis was at the club’s 40th anniversary party when he was 83. Using equipment that he built himself with a specially fashioned holder for a seven foot flagpole flying the yacht club burgee, he started from a member’s float and went out and around Linekin Bay before coming back in, safe and dry, much to the relief of club members at the party.

Reed comes from Worcester, Massachusetts, where he ran Reed & Prince, a manufacturing company started by his grandfather. His family were longtime Maine summer residents with a house on Isles of Springs in Sheepscot Bay. His first pair of skis was a gift to his father from the Paris Manufacturing Co. in Paris, Maine. He was 16 at the time. “I taught myself by trial and error,” he said. “From then on all the equipment that I have used, I built myself.”

An engineer by training, Reed was particularly proud of his innovations in the design of tow bars, including one that had a holder for a can of soda. On his first trip down the coast to Portland in 1953 when he was 29, he fashioned clips out of clothespins to attach three cans of Coke to his ski belt. He had prepared by eating three hours before he left so the digestive process would not sap his energy and he dressed in dark blue so the sun would keep him warm.

“I took off from a float so the only part of me that got wet was below the knees,” said Reed, adding proudly that he never fell while waterskiing.

In 1952 he made his first long-distance water-skiing expedition, going 15 miles to Monhegan. Also that year he won the Maine State Water Skiing Slalom Championship in Boothbay. He repeated the Boothbay-Portland trip in 1985 when he was 61, traveling the 42 miles in two hours and 20 minutes.

“When we passed the mouth of the Kennebec River, the tide was changing and there were waterspouts three feet high,” he recalled. “When the undertow pulled the tow line under water, I ripped the line back up by raising my hands quickly with the tow bar over my head in a sweeping motion so the line wouldn’t go between my skis. I didn’t realize how dangerous it was until it was over.”

A member of the Down East Yacht Club since 1968, Reed has owned many boats, including a Boothbay Harbor One Design that he once sailed with noted designer Starling Burgess. But while he loves boats, he’d rather not be in one.

“Most of the time when I used to cruise along the coast,” he said, “I was on water skis behind the boat, not in it.”